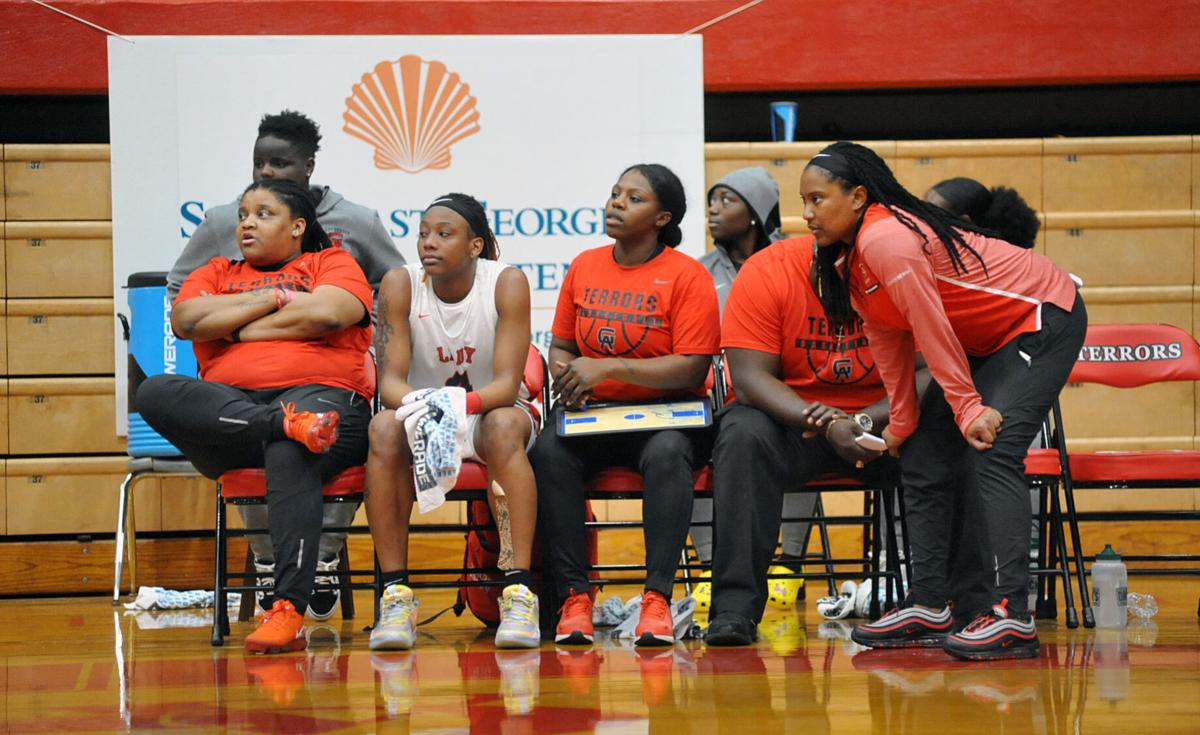 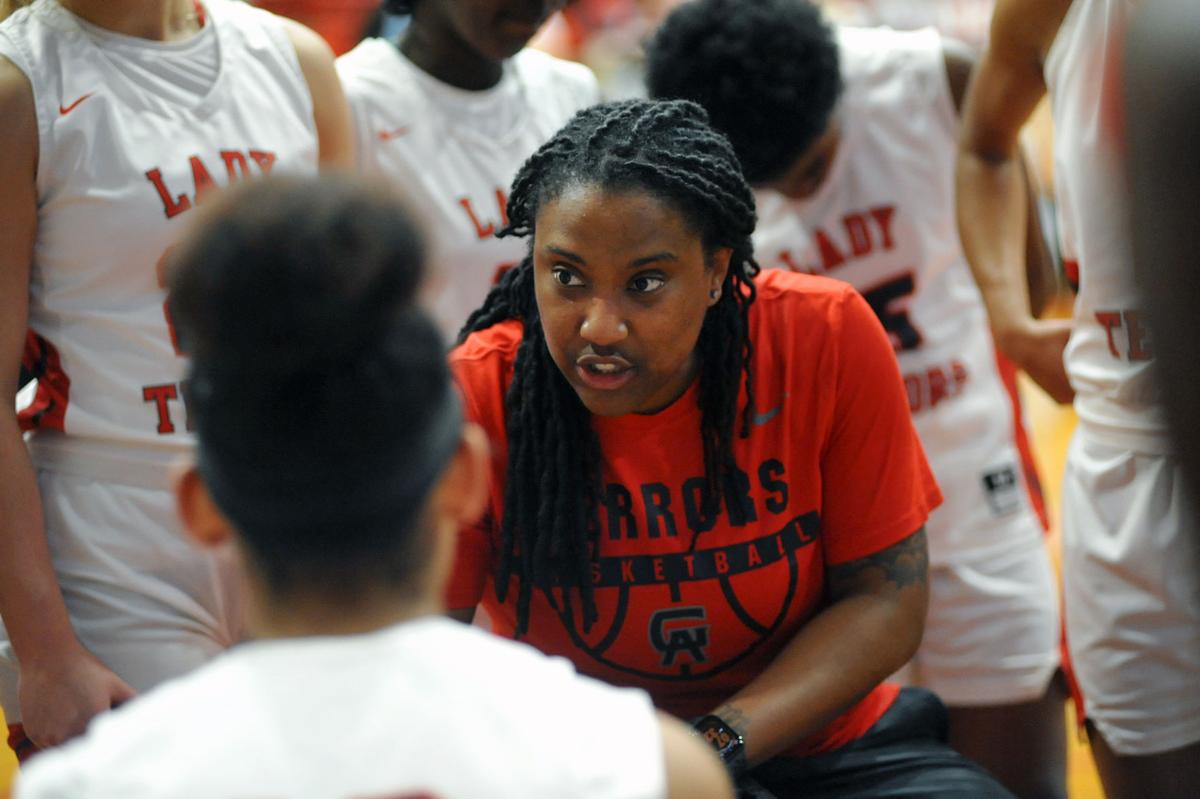 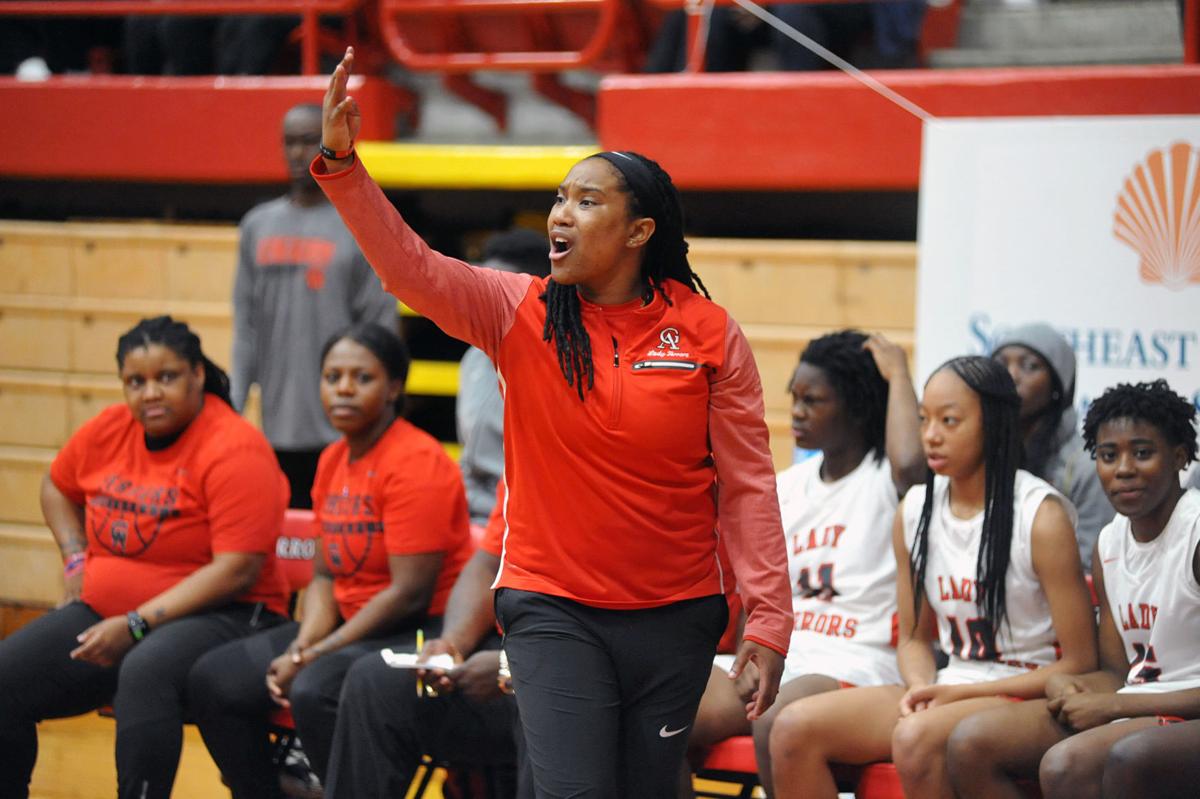 Glynn Academy head coach Sharnesha Smith calls out to her team during a second-round game in the Class 6A playoffs against Sequoyah at The Glass Palace.

Glynn Academy head coach Sharnesha Smith calls out to her team during a second-round game in the Class 6A playoffs against Sequoyah at The Glass Palace.

Glynn Academy girls basketball coach Sharnesha Smith and her sister Shayla were able to give back to their hometown community in Camden while also helping Glynn County in the same week.

Last week the duo put on a two-day camp at the Camden County Recreation Department, then held a one-day camp at Glynn Academy for both communities that included first through rising eighth-graders.

Sharnesha Smith said they had around 50 kids in Camden and about 30 or so kids for the camp at Glynn Academy. She said even though they didn’t have the girls there to help coach the camp because it was a dead week, her family and staff came together to make it happen.

“We’re normally used to having our girls heavily involved with camp,” Smith said. “I think the younger girls look up to them as far as mentoring goes, but we were able to make it work. I had a lot of my family members out there helping, and of course, my staff was there.

“So it was overall a good camp. Then we did the one for the Camden County recreation department two days last week, as well.”

Smith said Kit Williams-Brown, the athletic coordinator at the recreation department, reached out to them to bring back summer basketball camps in Camden.

“We’re from Camden. That’s where we grew up. We have a lot of soul ties there, and we live there currently — we commute to Brunswick every day,” Smith said. “Miss Kit, who’s the athletic program director there at the rec center, she’s been a coach to everybody growing up, and so she wanted to bring life back into the rec center.

“So she asked, and we talked about it, and it just kind of blew up. It was a very successful camp; we were able to see a lot of people that we grew up with, who currently have kids now. So to be able to come back and coach them and give them some insight, some feedback and, give back to the community, that was huge for us.”

It was important to Smith to give back to her community because that’s where it all started for her. She said it’s essential they give back to the community, and it’s something she preaches to her current players.

“Someone taught us along the way. We were heavily involved in camps, and to know some kids are still excited about basketball camp and want to be involved in something,” Smith said. “At a certain age, some kids veer off from that, and they find other things more important.

“So, to be able to give back, of course, always having that servant ability to do that, I think that’s what’s important. I try to teach that to my girls now at Glynn Academy — like, we always got to give back, we got to try to find community service to do, and we need to be out in the community. I think we do a great example of that.”

These youth camps hone in on the basketball fundamentals, and that’s key at that age. The fundamentals side of it is the most important part of the game.

Smith said she’s found that some coaches don’t even teach them anymore.

“Everybody wants to play, but nobody understands or knows the game of basketball,” Smith said. “There’s so many pieces and intangibles that go along with basketball to be a successful player or teammate. Like it’s so much that if kids can pick up on one or two of those things moving forward, I think that they’ll be a successful athlete.”

She said they continue that fundamental work at the high school level because it’s important to keep that knowledge fresh in the players’ heads. If she can introduce the fundamentals now, they’ll have good habits started when she gets them down the road.

“So to get those kids to do that now at their young age, I think that’s huge,” Smith said. “If they can just be consistent with that and stick with some coaches who continue to teach that. I think that’s the loss of art in basketball as a whole, whether it’s girls or boys.”

Smith said it was amazing to hear some of the feedback from the Camden camp, especially since it’s such a football-driven community.

“It was amazing just to hear the feedback from a lot of the parents who haven’t necessarily met before,” Smith said. “There were a lot of kids I didn’t know there, but to even see those people come out — they put a flyer out, and it had me and my sister’s pictures on it for when we played back in the day. I think that was pretty cool.

“It just blew up, being who we are and what we represent. I think that spoke for itself, but you rarely see a lot of camps going on, so to get that, that in Camden was huge. Football is crazy in Camden — everybody loves football in Camden, so to be able to provide that was good.”

The Smith sisters aren’t finished yet this summer as they’re planning to hold a rising 9th-12th grade camp on June 16 and a shootout June 23.

The camp on June 16 is $50 per player. Smith said even though it’s a one-day camp, she throws a lot at them, and it’s going to be intense.

“We’ll touch the fundamentals as well. We’ll do a lot of things that require footwork, agility stuff, shooting, passing — they’ll get to play a lot,” Smith said. “We want to see these kids be able to learn something and then be able to translate that into a game-like situation.”

She is also implementing team-building sessions because during her time as a college coach Smith saw how beneficial it was.

“We do team-building with them at that camp, and they get to experience working together with kids they don’t necessarily know,” Smith said. “We put them together, and they have to complete all these different tasks. It’s competitive, but it’s fun too. I think that’s important.

“I think that’s the missing piece that a lot of kids don’t necessarily get as well, just reminding them what is a great teammate — how can I benefit from being a part of a team, what do I bring to a team? So being able to think together and work together to accomplish one goal in those different sessions that we throw out, I think that’s important. That creates lasting friendships. They exchanged Snapchat and Instagrams, you know, all that stuff, but still to see that going on that’s always important to me.”