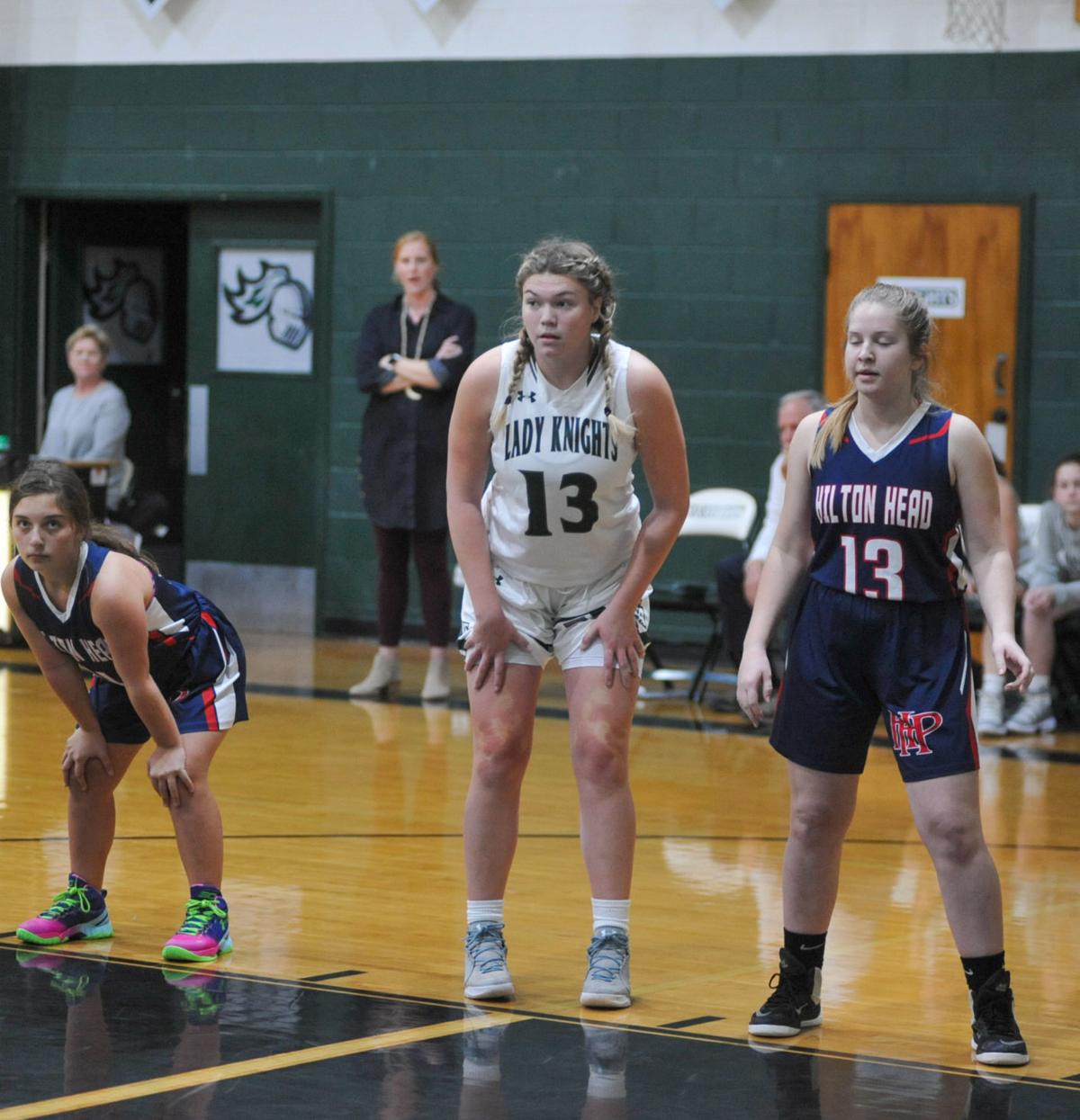 Frederica Academy senior Gracie Veal, center, gets ready to box out her opponent on Tuesday. 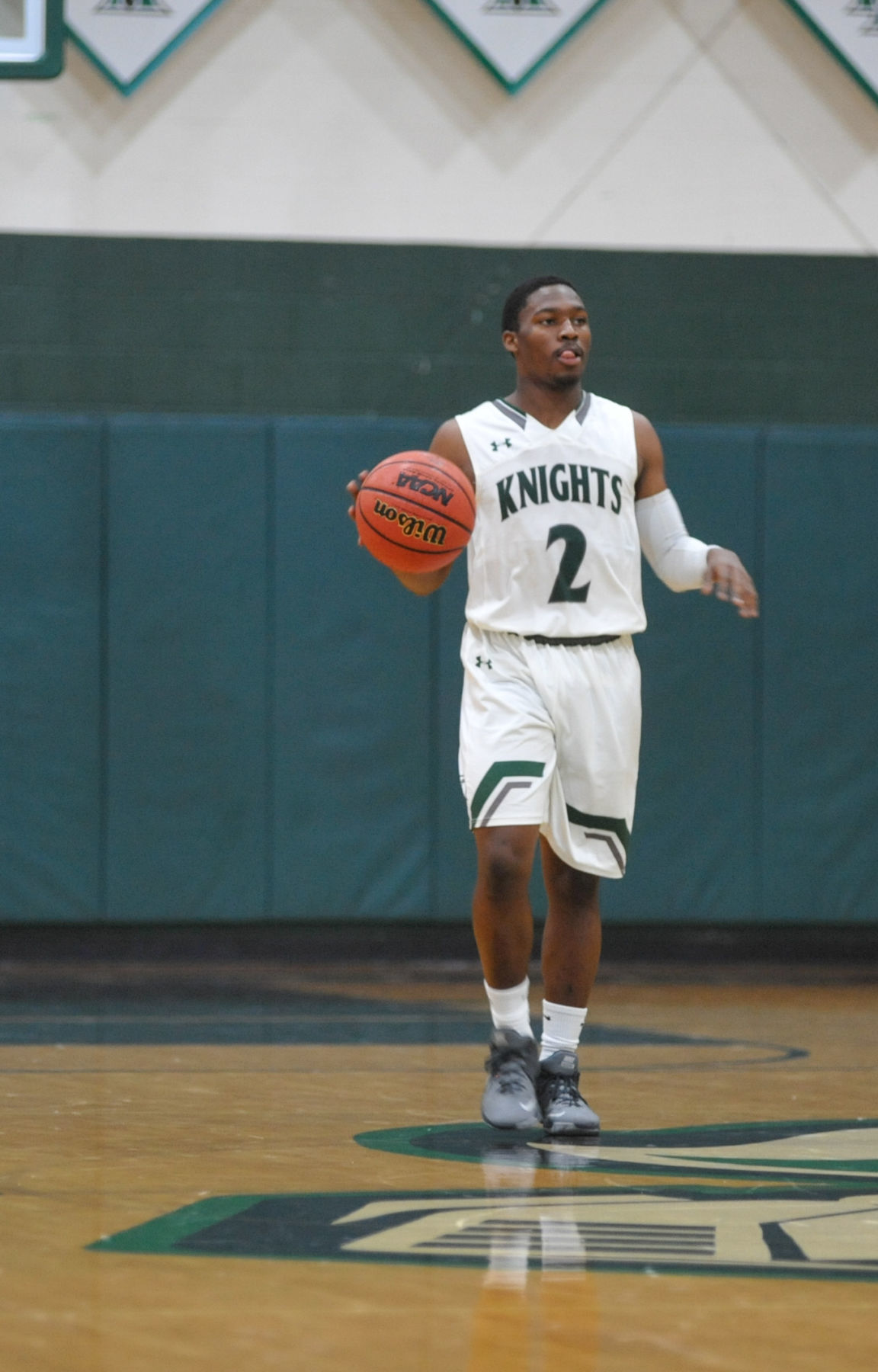 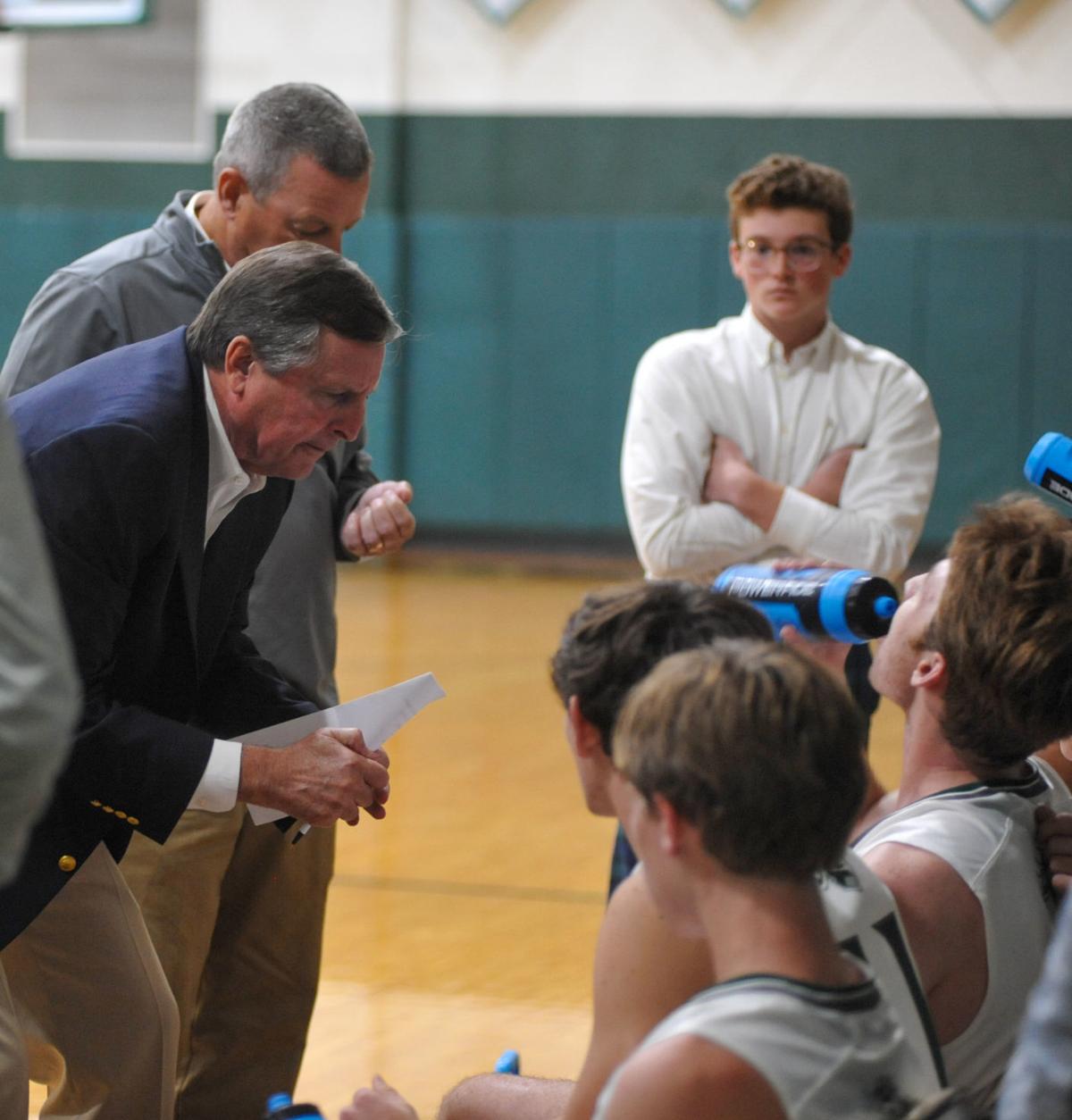 Frederica boys coach Carl Nash addresses his team during a time out against Hilton Head Prep on Tuesday.

Frederica Academy senior Gracie Veal, center, gets ready to box out her opponent on Tuesday.

Frederica boys coach Carl Nash addresses his team during a time out against Hilton Head Prep on Tuesday.

Turnovers were not Frederica Academy’s girls or boys basketball team friend as both squads struggled to hold onto the ball in the losses against Hilton Head Prep on Tuesday.

Frederica’s girls fell to Hilton Head 39-13 while the guys lost 63-39. Neither team had much success shooting the ball, and both coughed it up, which allowed both the Hilton Head girls and boys teams to capitalize on throughout each matchup.

Throughout the first half of the matchup, these two teams went head to head, and the score stayed close. After the first quarter, the Knights trailed 13-11, and it wouldn’t be close again.

Hilton Head shut down Frederica’s offense in the second quarter as the Knights scored seven points compared to the Dolphin’s 14.

After half time, it was all Dolphins making seven three-pointers. Leading the way for Hilton Head was Tyrone Calloway, who scored 24 points and sat out the entire second half.

Stone McDonald contributed 17 points for the Dolphins as well. Frederica couldn’t find an answer, and despite being down 42-27 heading into the final quarter, the Knights never gave up.

The leading scorer for Frederica was junior Eli Fritchman, who scored 16 points. He led the team with four three-pointers. Also scoring in double-digit points was Denver Anthony, who collected 10.

The Knights had 12 turnovers throughout the game while the Dolphins only had seven. Between the perimeter shooting success, Hilton had, and its ability to avoid having more than 10 turnovers elevated the Dolphins over Frederica.

Frederica’s coach Carl Nash didn’t like his team’s execution and said that a lot of that had to do with the fact that he doesn’t have his full team yet. Nash played two eighth-graders tonight with William Jobe getting the start.

“I don’t think we executed well at all, but we got better tonight, believe or not,” Nash said. “We played the South Carolina state champions, and they proved that they’re all that. They can really shoot the ball. We didn’t defend as well as we needed to. We just haven’t had time to work, and I hate using that for an excuse. When you don’t have your full team around, it takes away from the continuity of your team. It’s been a real frustration for me the last three years not to have our team here. We will get them together, but we got better tonight. With that, we have to keep our heads up and keep playing hard.”

The Knights move to 1-2 on the season. Up next for them will be another road game, this time at Citizens Christian Academy in Douglas. Frederica defeated Citizens the first time 56-42 on Nov. 23.

The Lady Knights didn’t have much success against the Dolphins tonight either. Like the boy’s team, Frederica’s girls couldn’t manage to hold onto the ball and turned it over 17 times. Hilton Head coughed up the ball nine times but was able to capitalize off Frederica’s.

An inexperienced Lady Knight team struggled from the opening tip-off and couldn’t contain their momentum. It was all Dolphins in the first quarter as they led 11-3.

Frederica was held to eight points at the half and 13 overall. The Lady Knights struggled to get the ball where it needed to go on offense consistently.

Despite the lack of offense from the Knights, coach Sarah Helder seemed proud of the improvements she continues to see from them.

“We’re young in experience, and that’s where we have a lot of people on the court that don’t have a lot of minutes in the game,” Helder said. “So I feel like every game we’re getting better and better. That’s what we’re trying to focus on is what’s the purpose of playing. For us, it’s to get better and is to work hard, learn about basketball, but more importantly, learn about life. Seasons and games like tonight, they’re tough, but I think it creates character, and it’s going to create perseverance that’s going to go a long way with them for life.”

Frederica has yet to win a game and is 0-4 on the season. Up next for the Lady Knights will be a road trip with the boy’s team to Citizens Christian Academy as they look for their first win of the year.