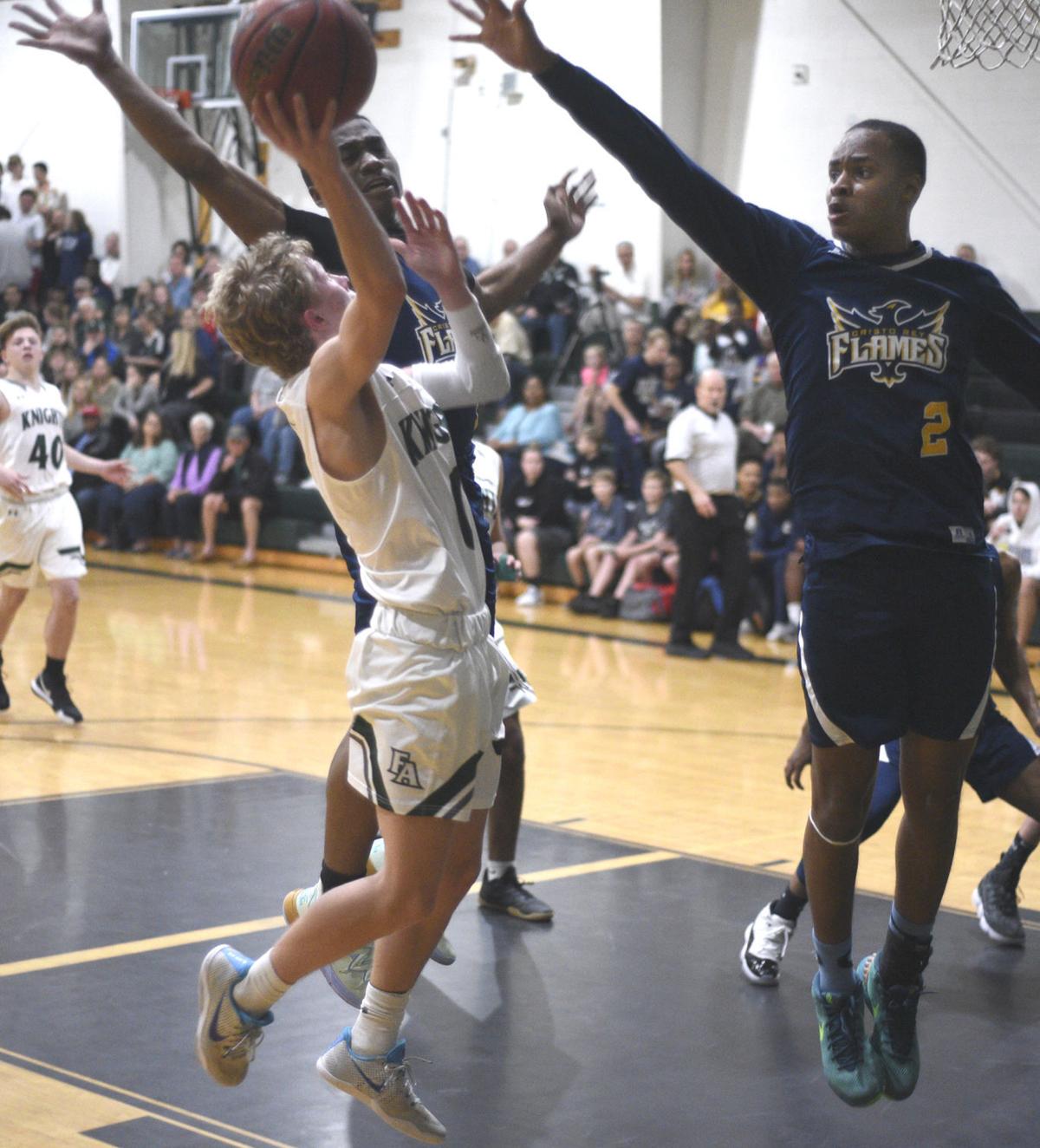 Frederica Academy’s Eli Fritchman shoots a layup over two defenders on Wednesday night in the first round of the GISA state playoffs. 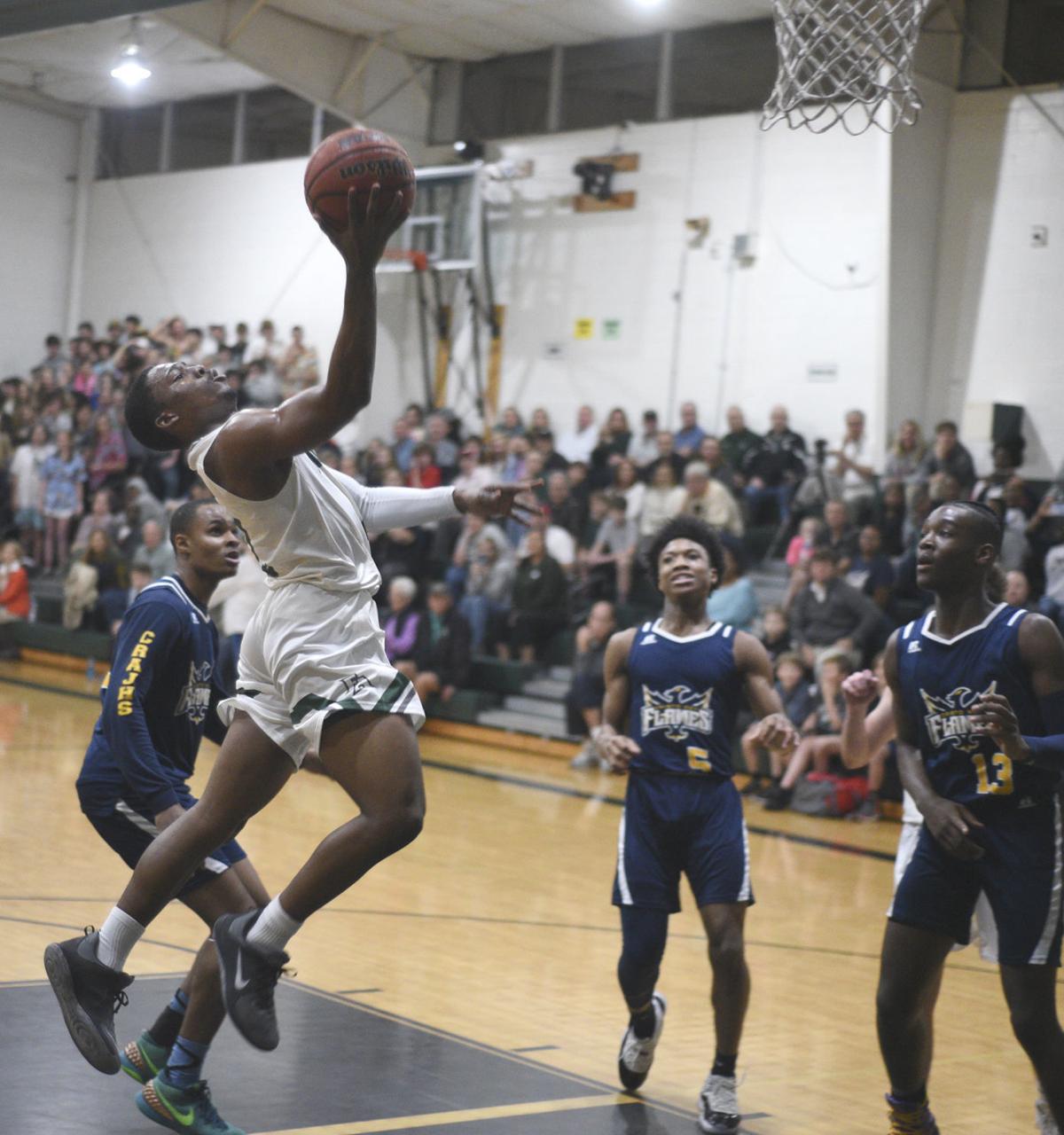 Frederica Academy’s Eli Fritchman shoots a layup over two defenders on Wednesday night in the first round of the GISA state playoffs.

Despite hanging with the Flames for most of the game, the Knights struggled to hang on to the ball. Cristo Rey executed off of those mistakes down the stretch and found a way to hold off Frederica and advance.

Both teams got off to a sluggish start as neither managed to score over 10 points in the first quarter. However, in the second quarter, both squads found their rhythm.

Frederica hung in there with the Flames and went into the break down 22-17.

Cristo Rey immediately opened up the second half with a huge three-pointer giving them a 25-17 lead.

The Flames and the Knights went back and forth throughout the third quarter trading points. However, Cristo Rey had an answer for almost every point the Knights made. That answer was Noah Jones.

Frederica challenged the Flames trading the lead and hanging in there with them until three minutes left into the game. However, Jones got hot, and the Knights couldn’t stop him as he scored 11 of the 13 points in the final quarter.

Of the 47 points scored by Cristo Rey, Jones finished with 26 of them. The second closest scorer for the Flames was Ibrahim Bass, who tallied seven.

The Flames pressed the Knights and forced mistakes and showed how disciplined they were. Cristo Rey was a strong fundamental team that fixed what mistakes it made in the first half.

Frederica senior Denver Anthony put the team on his shoulders on Wednesday night. He had multiple steals that resulted in points and did an excellent job making sure his guys around him got the ball as well.

It was Anthony’s final basketball game as a Knight as he finished with 10 points. Knights coach Carl Nash said he’s one of the best he’s coached and is proud of him.

“One of the greatest kids I’ve ever known in my life,” Nash said. “It’s hard to explain how important he is to not just this team but to Frederica. He’s one of those guys. He’s awesome.”

Nash said they turned the ball over too much and that Cristo Rey was the better team tonight.

“I thought we played great defense, but we didn’t get back in transition several times when they got layups,” Nash said. “We took some bad shots. I thought we did a pretty good job, and it’s been a great season. I’m disappointed with the loss, but not the season. We played a great team tonight out of Atlanta. They happened to be better than us tonight, but I don’t think that would happen if we played 10 times in a row. It’s one of those nights, but I love this team. I’m sorry that we lost this game, but it doesn’t take away from this season.”

Frederica Academy finished the season with an 11-10 overall record and their first region 3A title under their belt.