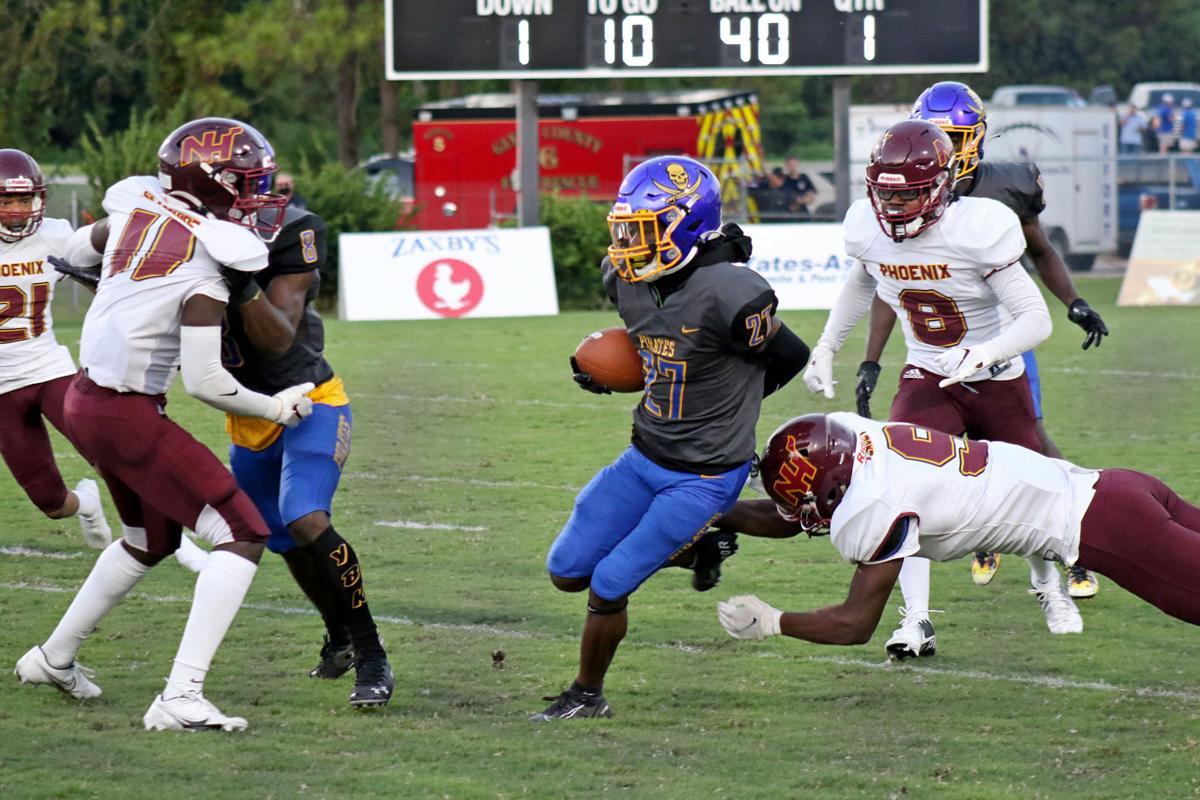 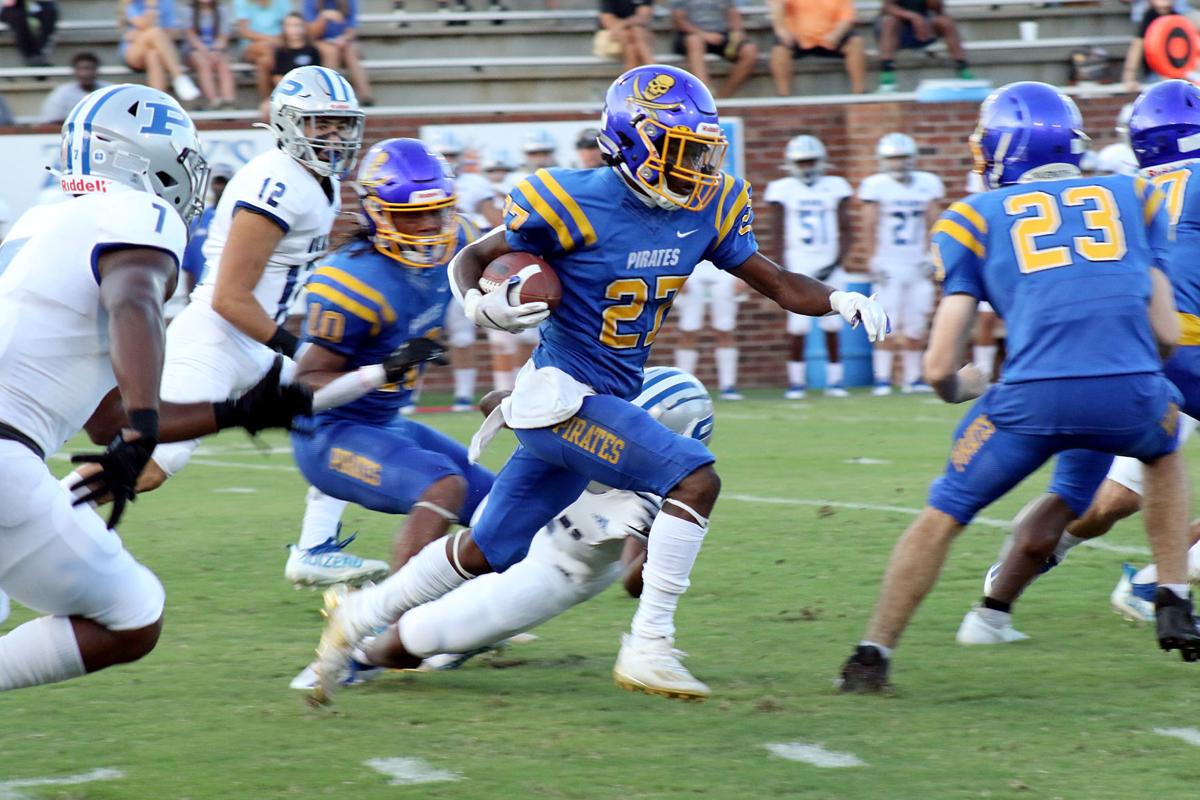 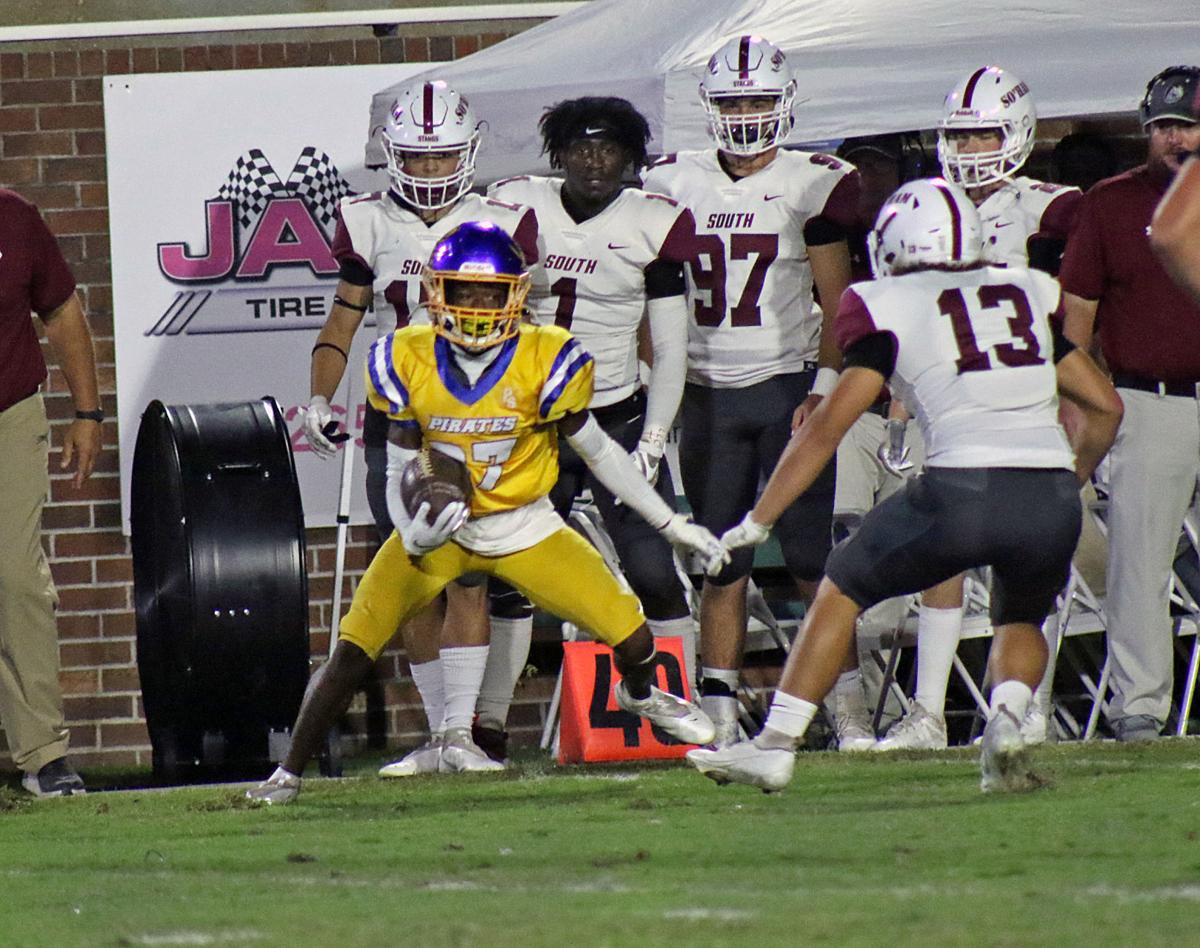 Sometimes summer standouts struggle to carry over their momentum into the fall. That has not been the case for Pirates sophomore Terry Mitchell.

Dubbed “Touchdown Terry” during the offseason, the diminutive receiver has quickly proven his electric play translates when the pads are strapped on.

Mitchell is averaging more than 23 yards per touch through seven games for unbeaten Brunswick High. His 36.4-yard average on kickoff returns is the best in Class 6A, and his 478 all-purpose yards are the second-most on the team.

“Early on, we could just tell he had electric ability when the ball is in his hands,” said Pirates receivers coach Jeff Braddy. “He has tremendous quickness that just makes it so hard for defenders to get a clean hit, get a clean tackle, and even after that quickness, the top-end speed is there too.”

Mitchell’s ascension began this summer. Though Brunswick has a handful of upperclassmen that ranked higher on the depth chart at the time, the program was able to travel with two different 7-on-7 teams, allowing Mitchell an opportunity to grab a spot.

Brunswick competed in a variety of camps and competitions throughout the summer, but it was at a 7-on-7 at the University of Florida that Mitchell really caught the eye of the Pirates’ coaching staff.

“So he showed some clutchness there, and that transitioned into the season.”

Still, Mitchell entered the season green and behind other receivers in the pecking order of a Pirates receiving corps trying to find its way following the graduation of its top two pass catchers in Tyrease Jones and Xavier Bean.

As such, it was no surprise to see Brunswick get off to a relatively slow start throwing the ball. Over the first four games of the season, the Pirates totaled just 336 yards on 39 passes, an average of 84.0 yards per game and 8.6 yards per attempt.

By then, Mitchell had already proven his prowess as a return man, including a 79-yard return on the opening kickoff against New Hampstead — a game in which he also recorded three tackles on the coverage unit — but he had yet to carve out a consistent spot at wideout.

For the Brunswick coaching staff, the situation was a delicate balancing act of involving the clearly explosive underclassman and avoiding overloading a young receiver as he learns a deep playbook.

“Our playbook can get a little bit extensive, and we were trying to move him around at some different spots, just to see where he fit, and that kind of slowed him down learning a little bit,” Braddy said. “We finally got him nailed down at what we call our ‘Z’ position, and when we did that, he was able to finish learning the playbook. That’s what got him his varsity time.”

In the meantime, Mitchell became a local legend for the Pirates’ junior varsity squad. His joystick-like moves are a problem for the most experienced defenders. Against players his age, Mitchell was just unfair.

“He had 10 catches and eight touchdowns in his short JV career,” Pender said, emphasizing the word short. “He’s no longer playing on Thursdays.”

Mitchell has found himself in an increasingly larger role for Brunswick in recent weeks. He fired a warning shot in his first City Championship game against Glynn Academy, racking up 77 all-purpose yards (22 rushing, 25 receiving, 30 kick return — on just four touches, and it could have been a much bigger game had an electric 70-yard punt return not been negated due to offsetting penalties.

In the Pirates’ next outing, Mitchell dominated in a more traditional fashion, catching three passes that went for 162 yards and three touchdowns against South Effingham. It was fitting, during a game in which he nearly replicated NFL Hall of Famer Randy Moss’ famous line against the Dallas Cowboys, Mitchell flashed his tremendous ability to track the ball in the air and “go get it” mentality that belies his 5-foot-8, 150-pound frame.

With a more modest four-catch, 48-yard performance against Statesboro last week, Mitchell has already become Brunswick’s leading receiver with 244 yards and three touchdown catches; his 10 catches are just one shy of running back Chuckobe Hill for the team high.

With “Touchdown Terry” in tow, the Pirates have seen a spike in their passing production the past three weeks, recording 583 yards on 51 passes for an average of 194.3 yards per game and 11.4 yards per attempt. Over that span, Mitchell has averaged 24.3 yards on 11 offensive touches.

“Terry Mitchell is a special kid,” Pender said. “He’s young, he’s still learning, but he’s electric, and I just think he’s going to get better and better as he gets more comfortable with the system. When you put the ball in his hands, he does a lot of really good things. He’s definitely a playmaker — he’s a threat every time he has the ball in his hands.”

But Mitchell understands this is just the beginning for him. Before even thinking about what the next two seasons of prep football has in store for him, Mitchell has to continue to develop and produce for the Pirates in the midst of a championship run.

Fourth-ranked Brunswick averages more than 222 rushing yards per game with a stable of running backs that opposing defenses must gear up to slow down. When a team overcommits to slowing down the Wolf Pack, it will be up to Mitchell and the Pirates’ receivers to make them pay.

Luckily for Brunswick, Mitchell cherishes the grind. He works hard, both on and off the field, to ensure he’s always ready to do what’s necessary.

“He’s hungry; he kind of understands he has some special abilities, but he wants to perform,” Braddy said. “When he is on the field, he wants to do well, and you can really see that in a lot of his work ethic, and that’s everywhere with Terry.

“He’s a great kid everywhere. A ‘yes, sir; no, sir’ kind of kid. He’s done well in the classroom, I know he’s made a lot of As and Bs in class. A lot of the teachers enjoy Terry. So he’s showing that work ethic everywhere, not just the football field.”