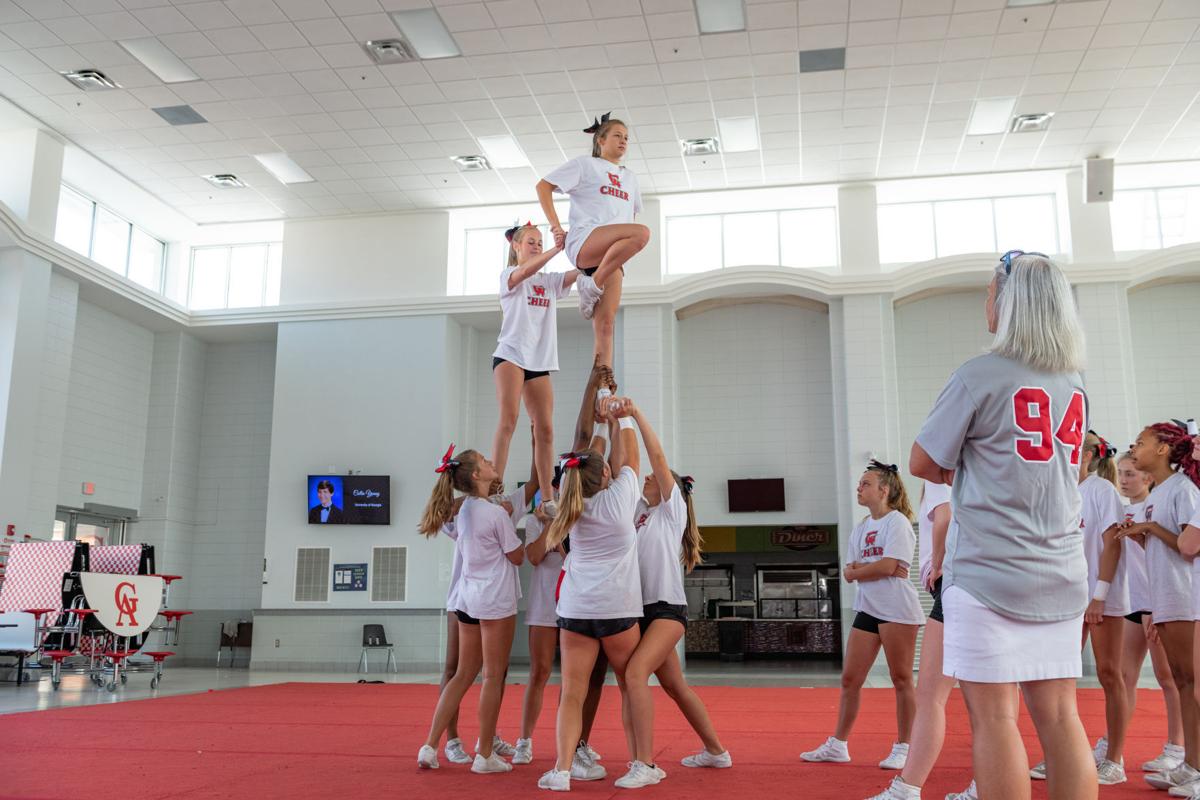 The Glynn Academy competitive cheer team practices in the school’s cafeteria as head coach Autumn Roberts during the season. 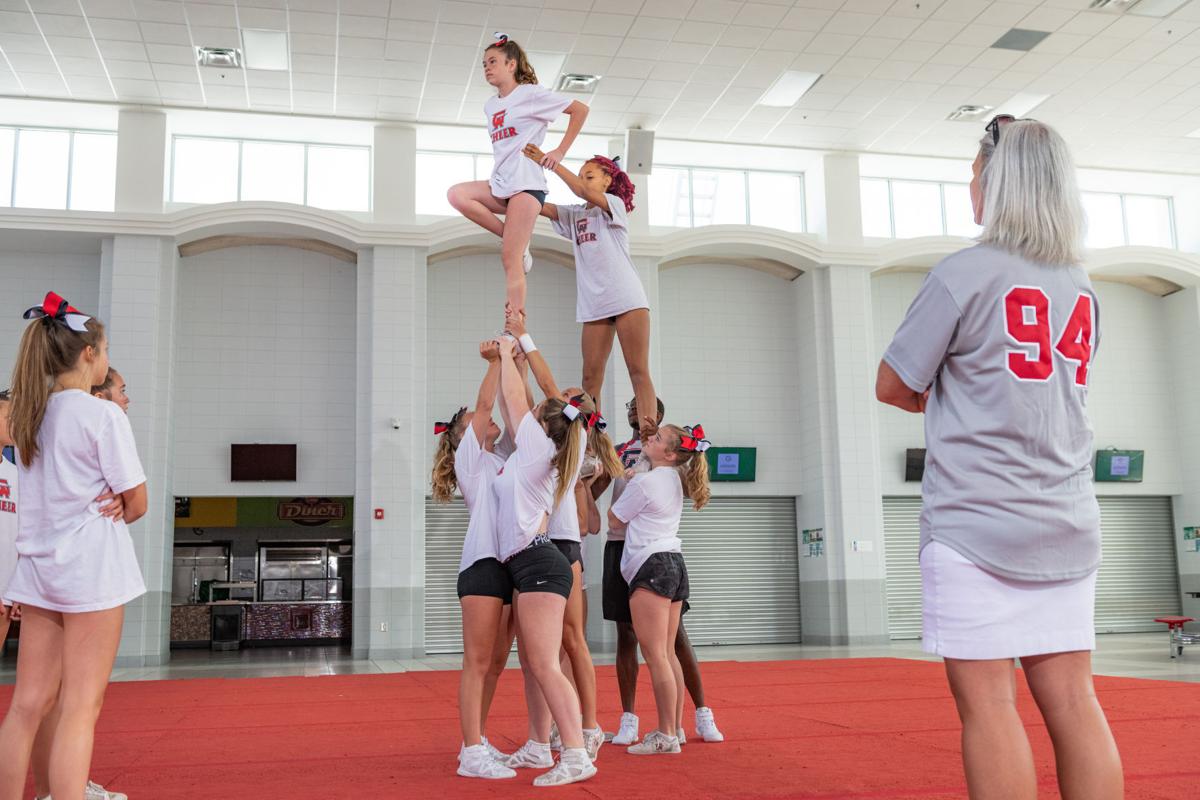 The Glynn Academy competitive cheer team practices in the school's cafeteria as head coach Autumn Roberts watches on during the season. 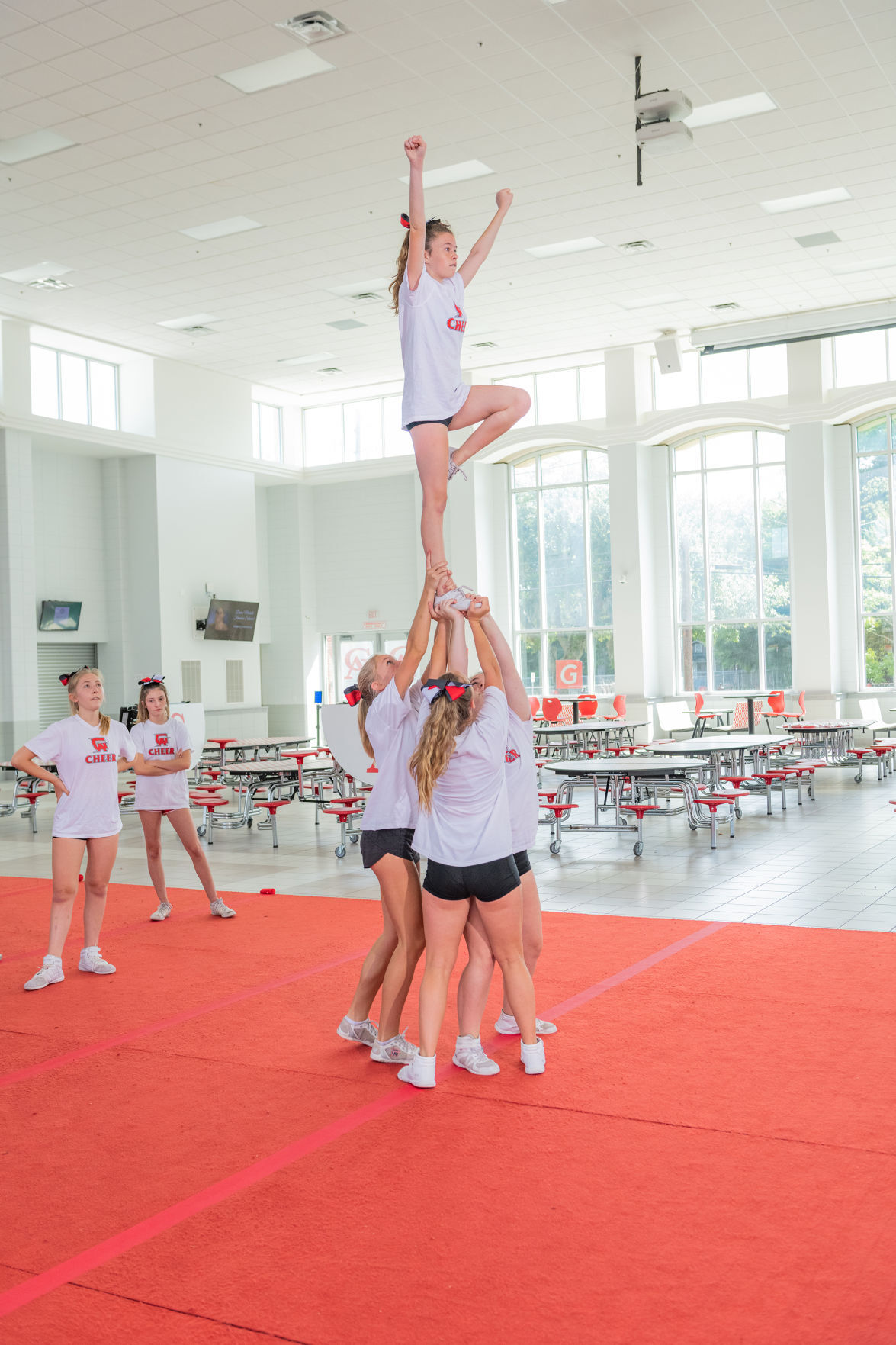 The Glynn Academy competitive cheer team practices in the school’s cafeteria during the season. 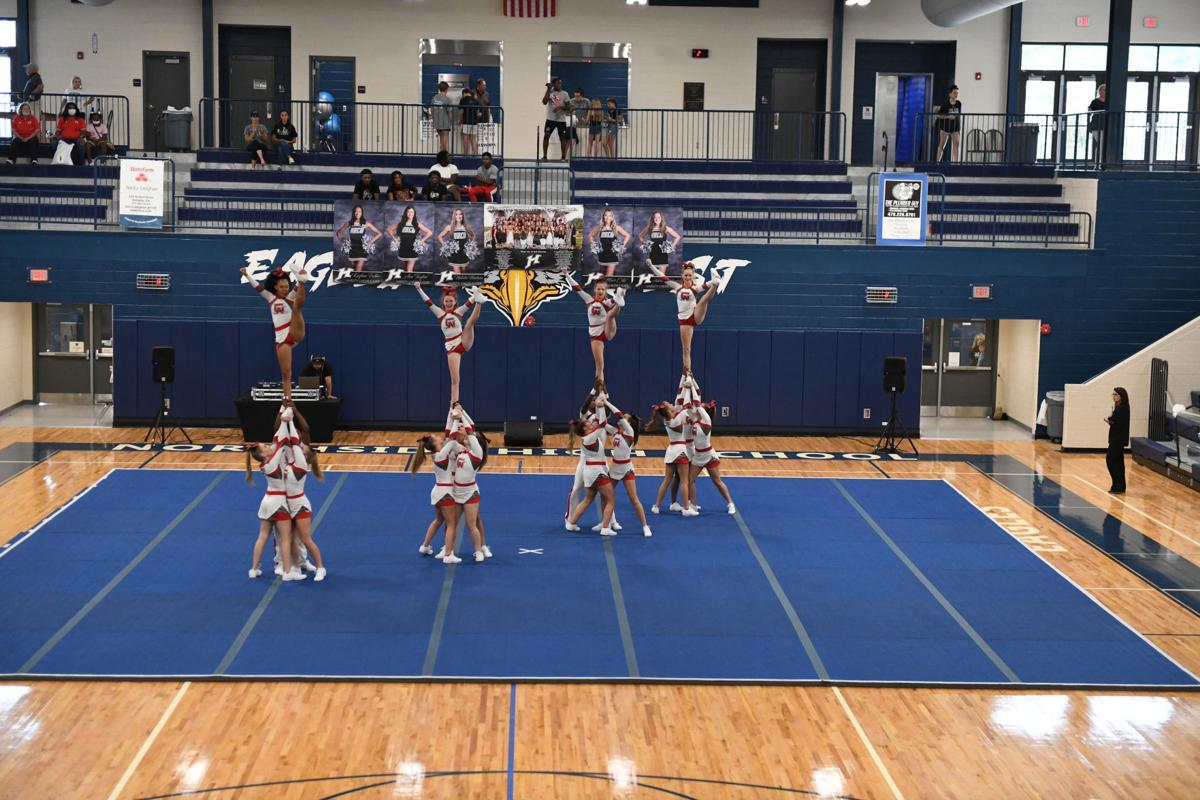 The Glynn Academy competitive cheer team practices in the school’s cafeteria as head coach Autumn Roberts during the season.

The Glynn Academy competitive cheer team practices in the school's cafeteria as head coach Autumn Roberts watches on during the season.

The Glynn Academy competitive cheer team practices in the school’s cafeteria during the season.

Although they hail from different backgrounds with varying levels of experience and skill, the Glynn Academy co-ed competitive cheer team has proven it moves as one on the mat.

In just its first two seasons, the program has earned a pair of top-10 finishes at the GHSA Cheerleading State Championships. This past weekend, the Terrors traveled to the Macon Centreplex to cap off a wild ride that saw Glynn Academy place 10th in the state finals — a remarkable feat for a team that must move lunch tables around in the school’s cafeteria to clear space for practice.

But adversity has become commonplace for the Terrors already. The inaugural season for the co-ed program was stretched over eight months due to the global pandemic. Just nine months after competing in its first state championship, Glynn Academy was back again, albeit closer and more in-sync than ever before.

And understandably so. The season prior, the Terrors were just forming their co-ed competitive cheer program. Some of the team’s key members had not even considered the sport before.

A day at the pool acted as Jakalie Burns’ portal into the world of cheer. A senior backspot for Glynn Academy, Burns watched as some of his future teammates flipped into the water, and after showing off his athleticism, he was convinced to try out for the newly formed co-ed team.

“I was a band kid,” Burns said with a chuckle. “The only other sport I did was run track, and last year was really my first doing that too.

“I just jumped on the train with everyone else going into the unknown.

Rebekah McKinnon has cheered on the sidelines of various sporting events since middle school, but even she quickly discovered competitive cheer is a different beast entirely.

“I’ve never done anything like competition cheer,” McKinnon said. “Our first competition was my first time ever stepping in front of a mat to perform like that, and I was really nervous.

“But I never thought I could be doing the things I’m doing now stunt-wise and performance wise.”

The Terrors’ rapid growth can be attributed to the extensive experience and expertise of Glynn Academy coaches Autumn Roberts and Stacy Oliver, who have a combined 30 years of competition cheer coaching experience between them.

One of the most important lessons the coaches have worked to get across to its team is the level of dedication, sacrifice, and focus required from all 16 cheerleaders on the mat, as well as the six alternates.

Unlike most sports, there is no halftime during a cheer competition. There are no timeouts to be taken. After preparing their team for a competition, all a coach can do is sit back and watch along with the audience.

“You literally have two minutes and 30 seconds to give it 110 percent,” Oliver said. “One little error, one little misstep can be the difference between winning and losing.

Cheer teams spend their season on one routine, adding to it and perfecting the movements throughout various competitions leading up to one shot on the state championship stage.

The adrenaline rush that comes while performing never goes away, even for the most seasoned cheerleaders in the Glynn Academy program.

“It’s still there,” said Brianna Lemmond, a senior secondary base with 11 years of experience. “It doesn’t change.”

As the most veteran member of the Terrors’ cheer team, Lemmond has taken over a leadership role as a coach on the floor. Roberts and Oliver lean on Lemmond to keep up with counts and know what is going on while on the mat.

More than just the pep talks and pats on the backs she hands out backstage at competitions, Lemmond’s most impactful quality to the team may be her mindset throughout the week.

“When a coach tells you to truly pay attention, and practice how you play, they mean it,” Lemmond said. “Because when you go out there, it’s nothing but muscle memory going out and giving it your all, hitting those stunts.

“If you constantly buckle your knee in a stunt, you’re going to buckle out there. It’s the little things that truly do matter when it comes to practice time to where those aren’t the things you think about when you’re on the mat competing.”

Just a sophomore, main base Katie Hickson brings a similar mentality, having cheered since the sixth grade. She attributes a better chemistry within the team and an understanding of the coaches’ expectations as the catalyst to the Terrors’ success this season.

Glynn Academy won each of its three competitions ahead of sectionals, beating out more established programs with years of training.

Leading into their final regular-season competition, the Terrors worked to incorporate a new addition to its routine. The team struggled throughout the week to land the stunts before nailing it on the competition mat.

“Before that week, we added this new sequence in the pyramid, and our stunt group was just struggling to get it the whole entire week,” McKinnon said. “But once we got on the mat and it got time to perform, we hit it perfectly. It was the best feeling.”

The post-performance highs were consistently mentioned among the team’s favorite memories of the season.

One of the year’s highlights came when one of the regular members of the competition team was forced to miss an event. As a result, one of the six alternates were required to step in for the first time on the season, and fill in seamlessly.

“Probably one of the best experiences would be one of the girls going in as an alternate, and us pounding on her hitting the skills and all that,” Lemmond said. “Obviously we were stressing because we were undefeated. We’re like, ‘We need to do good, we need to do good,’ and then we’re throwing her in last minute, hoping she’s going to do her best, and then her actually hitting.

“Everyone came off and was so happy for her. I think that was a really big thing, not only for us, but for her. I know she was proud of herself.”

Junior alternate Rylee Martin knows how difficult an understudy position can be. Alternates cannot just be subbed into a competition to give the starter a quick breather.

Instead, the alternates must learn multiple roles in a routine, despite few opportunities to practice with the main competition group, on the chance they’re called into duty at a moment’s notice.

“As an alternate, we’re not on the mat, but we’re supposed to shadow somebody,” Martin said. “I had someone originally, and then I got moved. But there are more people on the mat than there are alternates, so if someone gets hurt, one of us goes in. We can’t really learn one spot specifically, we have to know everybody’s routine.”

Add in a full class load at school, any additional extracurricular activities, and sideline duties on Friday nights, it becomes clear just how much work goes into being a competition cheerleader.

It can be particularly difficult to toil in the relative shadows compared to other athletic teams on campus.

Two weeks ago, the Glynn Academy cheerleaders traveled to Powder Springs to compete at the co-ed sectional meet, where they placed 11th out of 22 teams to qualify for state before going on to cheer the football team on from the sidelines in its playoff game in Fairburn.

Still, for senior backspot T.K. Kirksey, who played football for two years before becoming a cheerleader, pulling double duty on the sideline has been one of his best memories.

“When we changed our run outs, that was one of my favorite parts (of the year),” Kirksey said. “Now, I tumble in the front instead of being in the back and being the last to tumble.”

Senior Tyler Brasher will also cherish her time on the field at Glynn County Stadium: “My favorite memory from the last two years would truly be every single football game that I’ve spent between the bricks on Friday nights. Rain or shine, cheering for the Terrors on home turf is nothing short of a good time. Our team is full of pleasant and genuine individuals, and cheering alongside everyone is so unifying and beyond fun.”