Sign Up
Log In
Purchase a Subscription
You are the owner of this article.
Edit Article Add New Article
You have permission to edit this article.
Edit
Welcome, Guest
Home
FULL MENU
News
Life
Sports
Obits
e-Edition
Classifieds
Jobs
Events
Subscribe
1 of 6 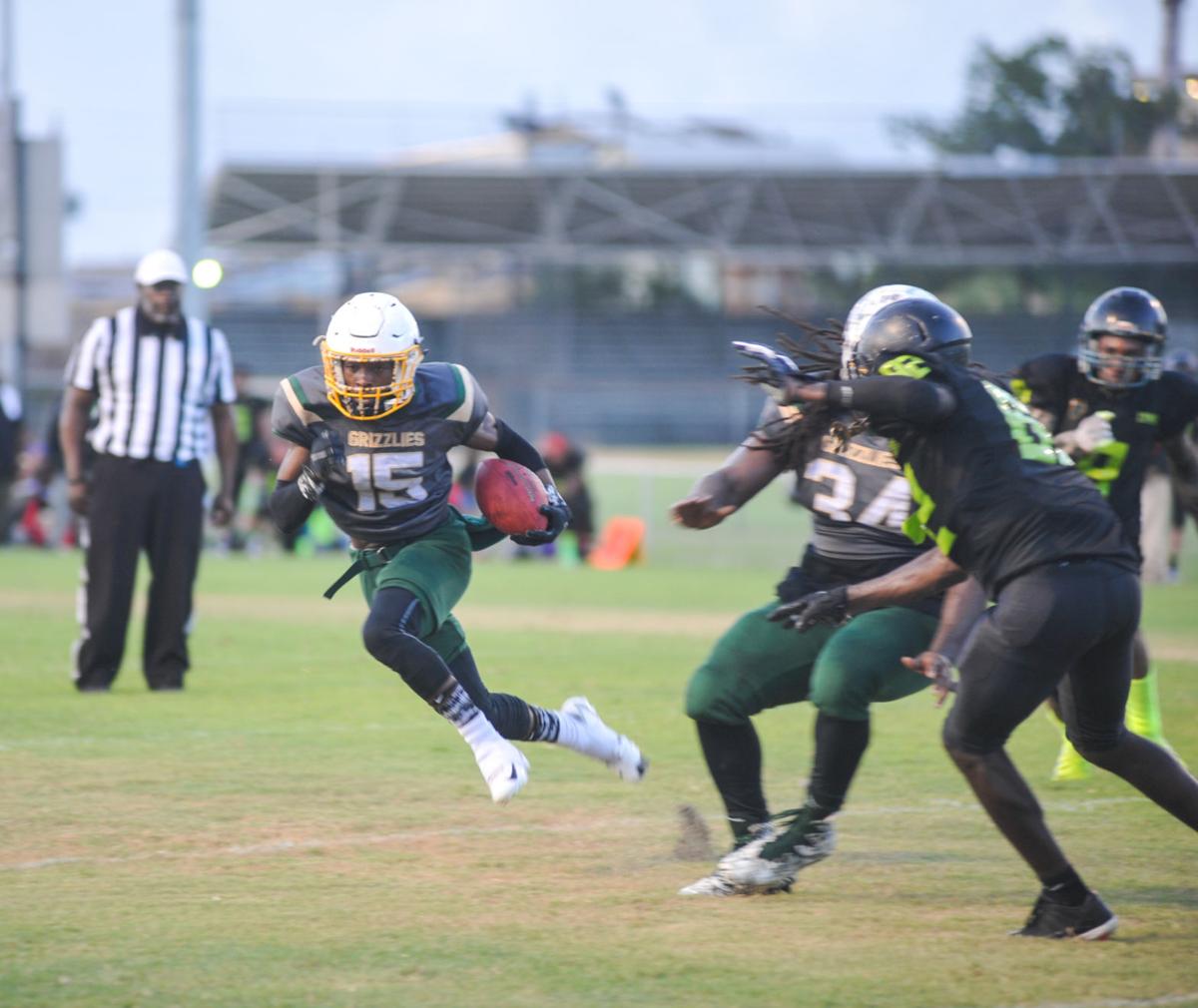 Golden Isles Grizzlies running back Morris Demery totes the rock towards the end zone on Saturday. 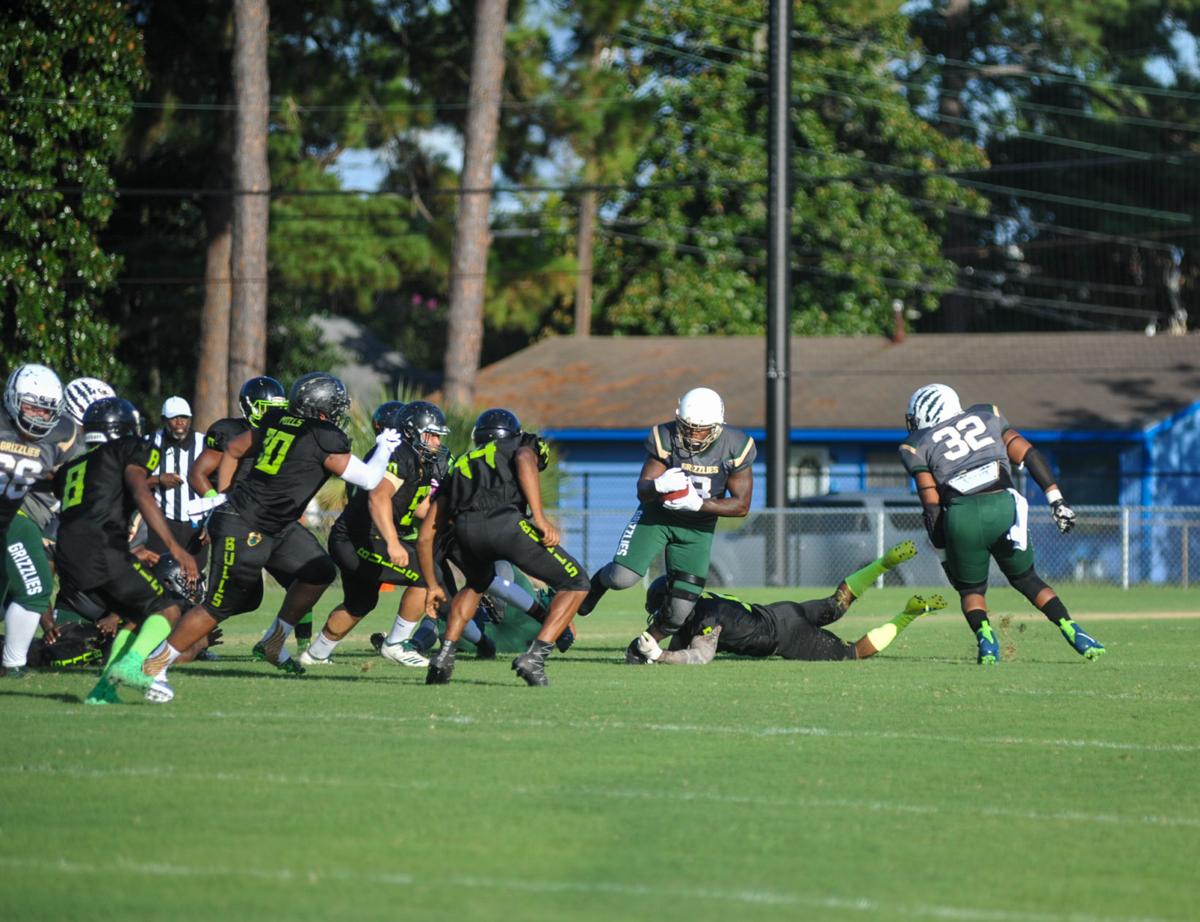 The Golden Isles Grizzlies run the ball during the UFL Championship game on Saturday. 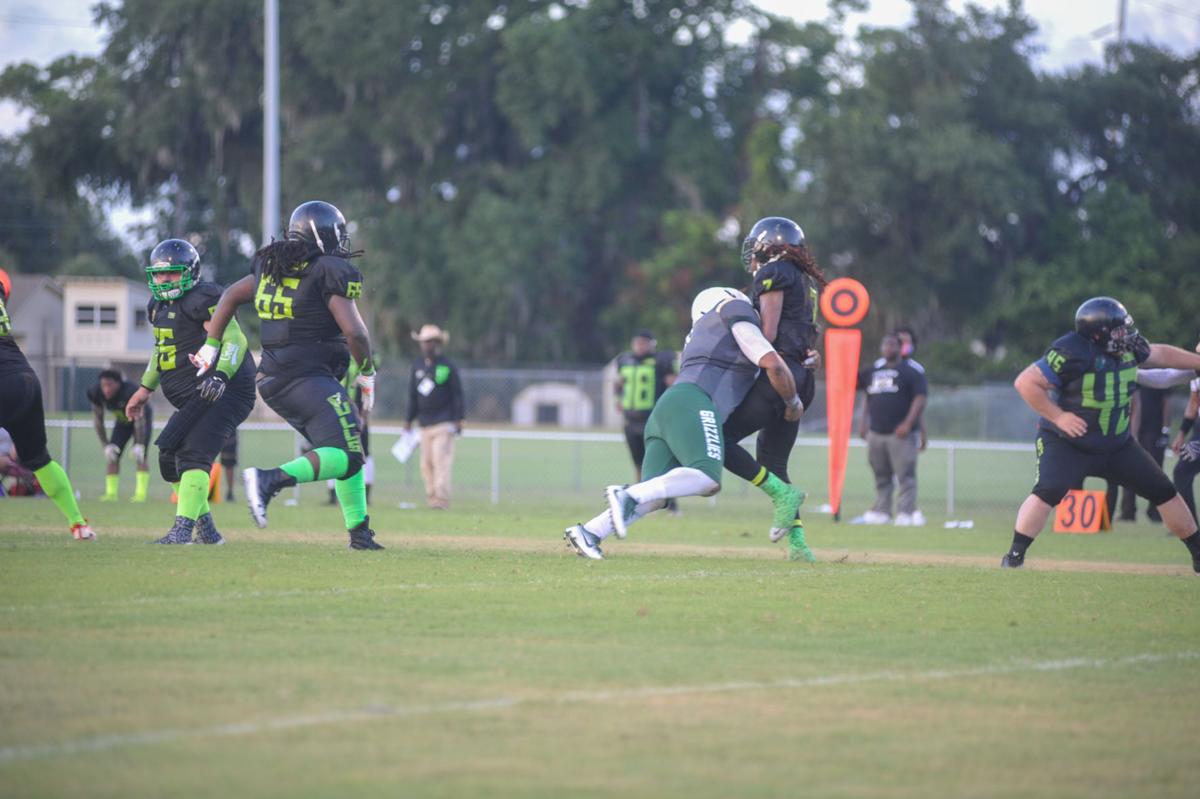 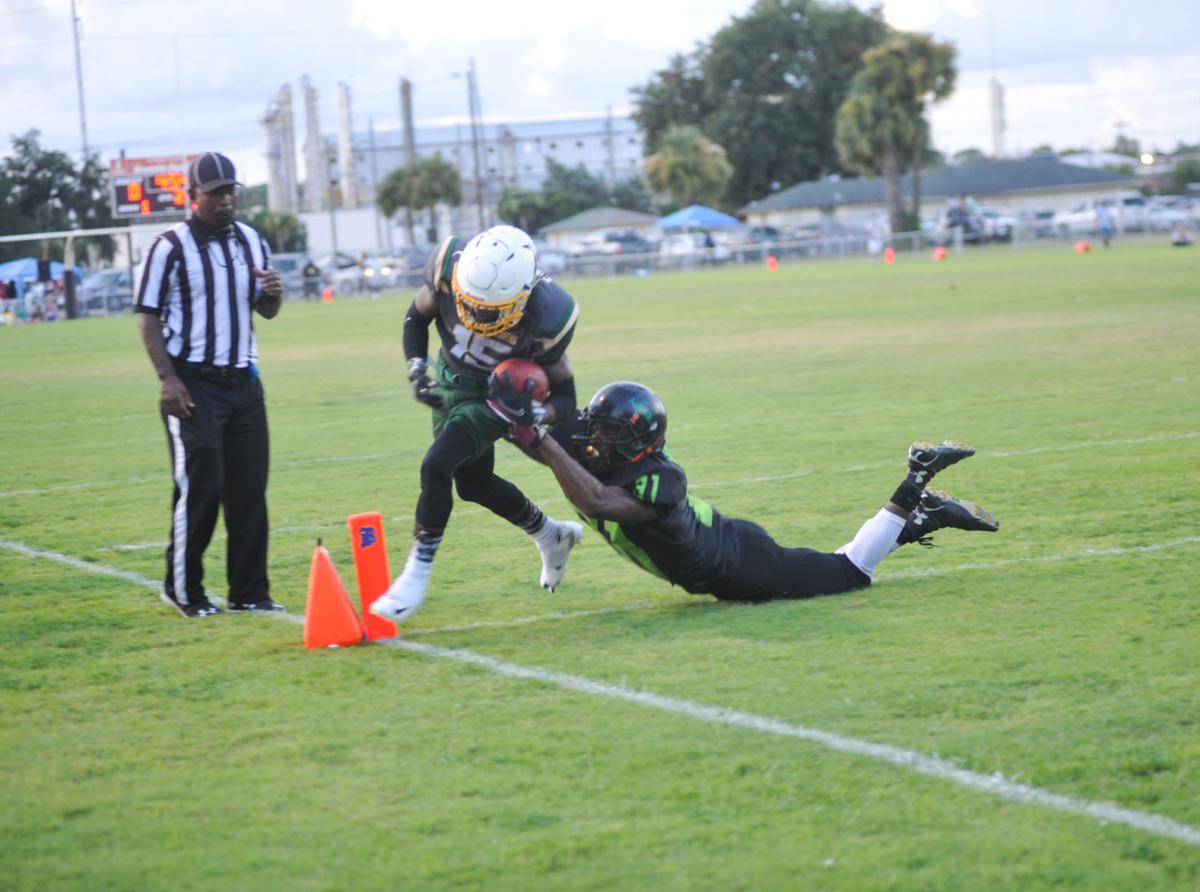 Morris Demery runs it into the end zone for a touchdown. 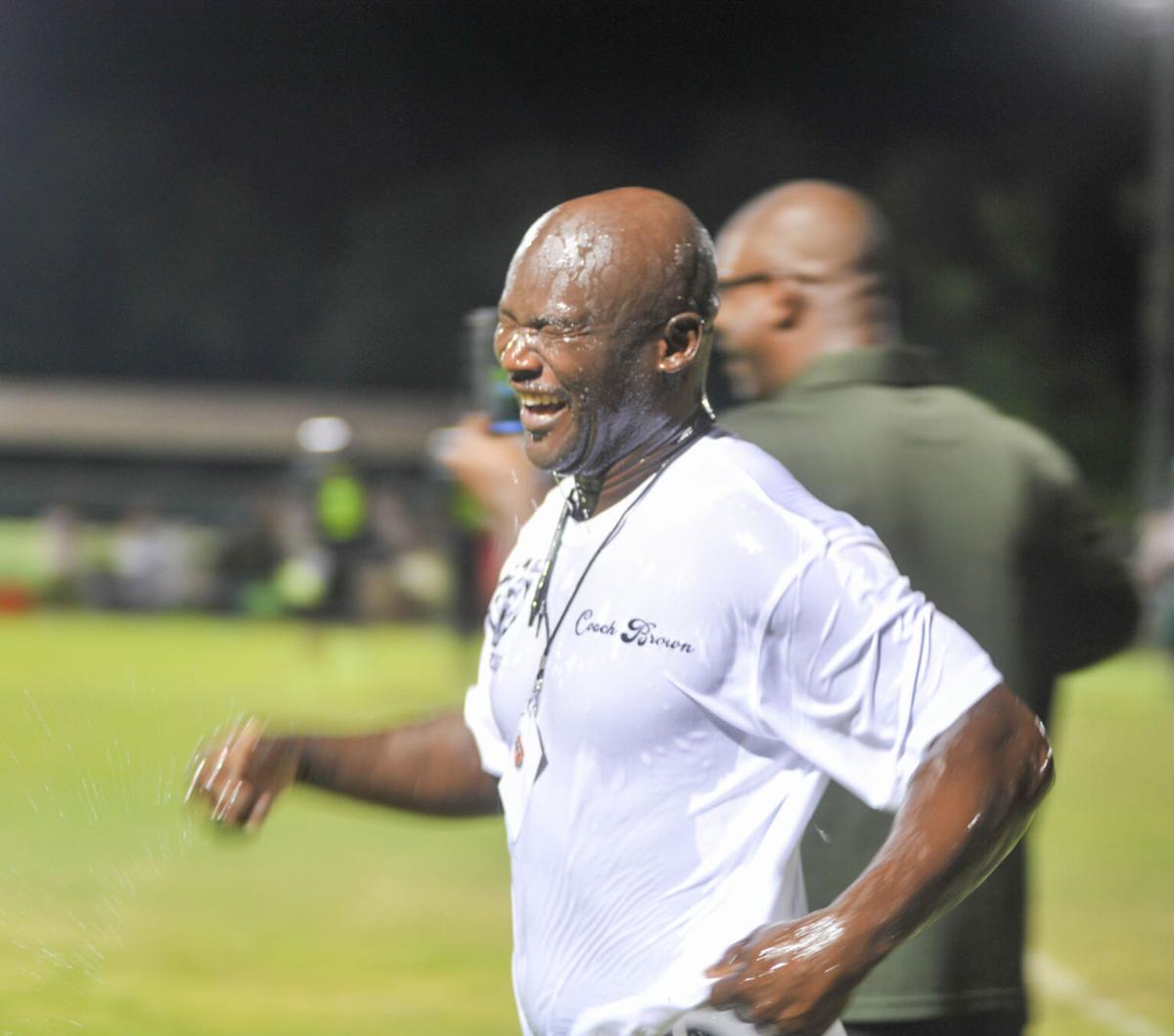 Grizzlies head coach Shawn Brown laughs after getting drenched with water on Saturday after his team defeated the Bulls 38-18 to win their first UFL Championship. 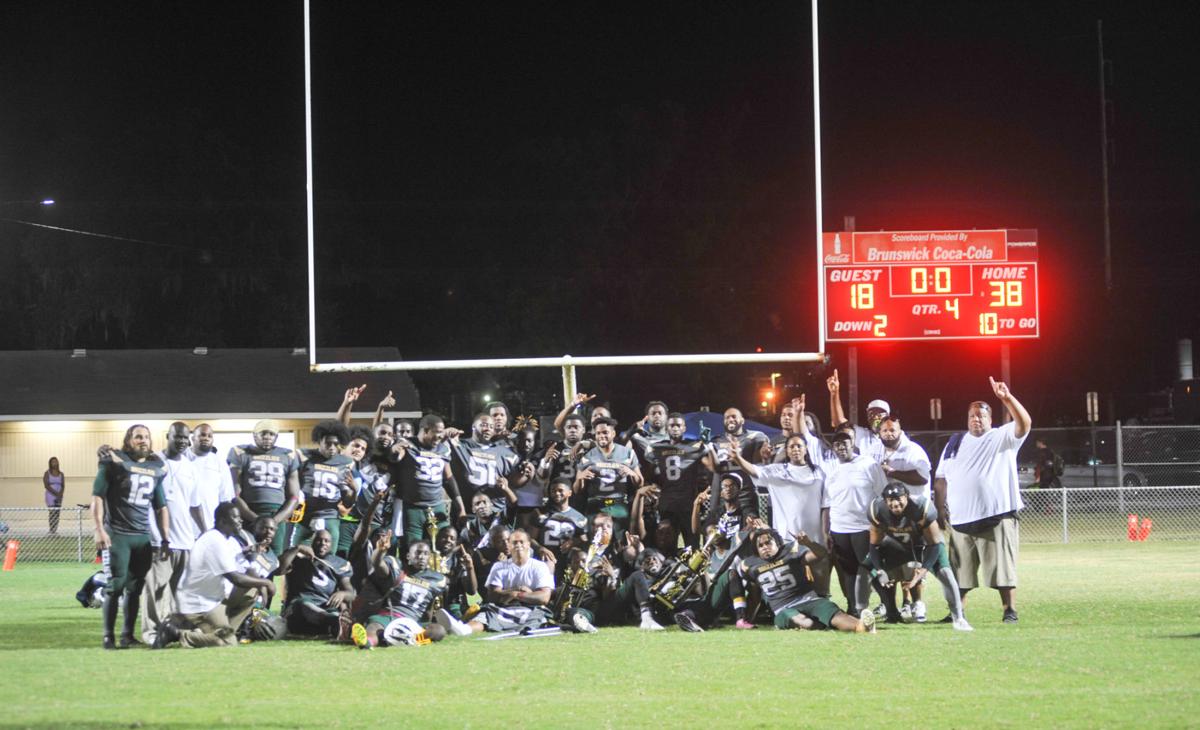 The Golden Isles Grizzlies won the 2020 Universal Football League Championship on Saturday against the Central Florida Bulls 38-18 as they won their first title since joining the league three years ago. Both teams came into the game undefeated, but the Grizzlies prevailed and finished perfect on the season.

Golden Isles Grizzlies running back Morris Demery totes the rock towards the end zone on Saturday.

The Golden Isles Grizzlies run the ball during the UFL Championship game on Saturday.

Morris Demery runs it into the end zone for a touchdown.

Grizzlies head coach Shawn Brown laughs after getting drenched with water on Saturday after his team defeated the Bulls 38-18 to win their first UFL Championship.

The Golden Isles Grizzlies won the 2020 Universal Football League Championship on Saturday against the Central Florida Bulls 38-18 as they won their first title since joining the league three years ago. Both teams came into the game undefeated, but the Grizzlies prevailed and finished perfect on the season.

It’s been quite the journey for the Golden Isles Grizzlies since becoming a team three years ago.

From the countless first-year struggles to falling short last season, the Grizzlies overcame it all to defeat the Central Florida Bulls on Saturday 38-18.

It’s been 56 years since the last football championship in the city of Brunswick, and not only did they win, but the Grizzlies won it on historic Lanier Field – just like the other championship teams did.

Head coach Shawn Brown and Willis have been coaching together for years. From them being on John Willis’ staff, coaching The Revolution, to now the Grizzlies, these two refused to take the credit.

Instead, they both said this win was for the community and coach Willis.

"It’s important because when you look at the history of Risley High, Glynn Academy and then having the opportunity to coach under coach Willis and learn everything I know from him,” Brown said. “It made me feel like I had a second chance of doing it because he opened the door for us to prepare ourselves – to coach as a champion.”

Brown coached under Willis for 19 years, and he did it all. From taking notes watching film, he did it all – as did Mike Willis.

Neither understood until after the championship win why coach Willis did the things he did.

Coach Willis taught them how to win, and the fact that they got to do it on the same field as the others, sparked older community members to watch them.

“You look at the coaches who were coaching in the city for years fighting to get a championship – coach Willis, I respect coach Howe tremendously,” Brown said. “When you see coach Howe, he'll say, hey, y'all doing a good job. Y'all are making the city proud.”

It was a rough journey from the beginning, but what stood out the most was the support they got from the community.

One evening while Brunswick was playing and Glynn Academy was off, Brown said Hidalgo came up to their little corner of the stands and asked coach Willis a question that stuck with Brown.

“He asked coach Willis, he said coach tell me how you were able to stay in Brunswick, so long,” Brown said. “

Coach Willis gave an answer that still sits with the community to this day.

The Grizzlies got a lot of support from the community, including Julie Jordan, James Howard, Keith Higgins, Pastor Mark Baker, just to name a few.

“You got to have community support,” Willis said. “You got a lot of people that helped us when they could. If it weren't for their support, we wouldn't be where we at now. That first year was, oh my god, I mean the struggles that we had the first year. We didn't even have uniforms.”

Pender donated uniforms, and Hidalgo helped out with equipment.

The two talked about how the athletic department was so helpful – including Hidalgo at Glynn Academy and Sean Pender at Brunswick High.

Brown said he could call Steve Waters up, and they’re always willing to help out, no matter what.

“We got kids that are on the team that came through the system. They came through Glynn County's system,” Willis said. “So why not build it back to the community. I mean, that's the most important part.”

At Saturday’s game, there were probably 1200 people in attendance. They had the roads surrounding Lanier Field blocked off, and people sat on the side of the road, in their cars, wherever they could to find a good place to watch the game.

The Grizzlies were the first team in 56 years to end the drought. Both Brown and Willis said they hope this win shows the younger generations that it can be done.

“I just would love for them to see that it can be done. You got to be patient and follow your vision that you want and put the kids in the right position to win,” Brown said.

The Grizzlies won’t be back to defend their UFL Championship title as the coaches have decided to move leagues and join the FFA 2.0 – The Federal Football Association.

“This is one of the top leagues in the United States,” Brown said. “We're getting ready to leave the UFL because I think it's better competition and better recognition for the city.”

However, to continue to compete and stay successful, they’ll still need the community’s help. If anyone would like to help support the Grizzlies, please contact Mike Willis at 912-223-0472 or Shawn Brown at 912-506-1688.