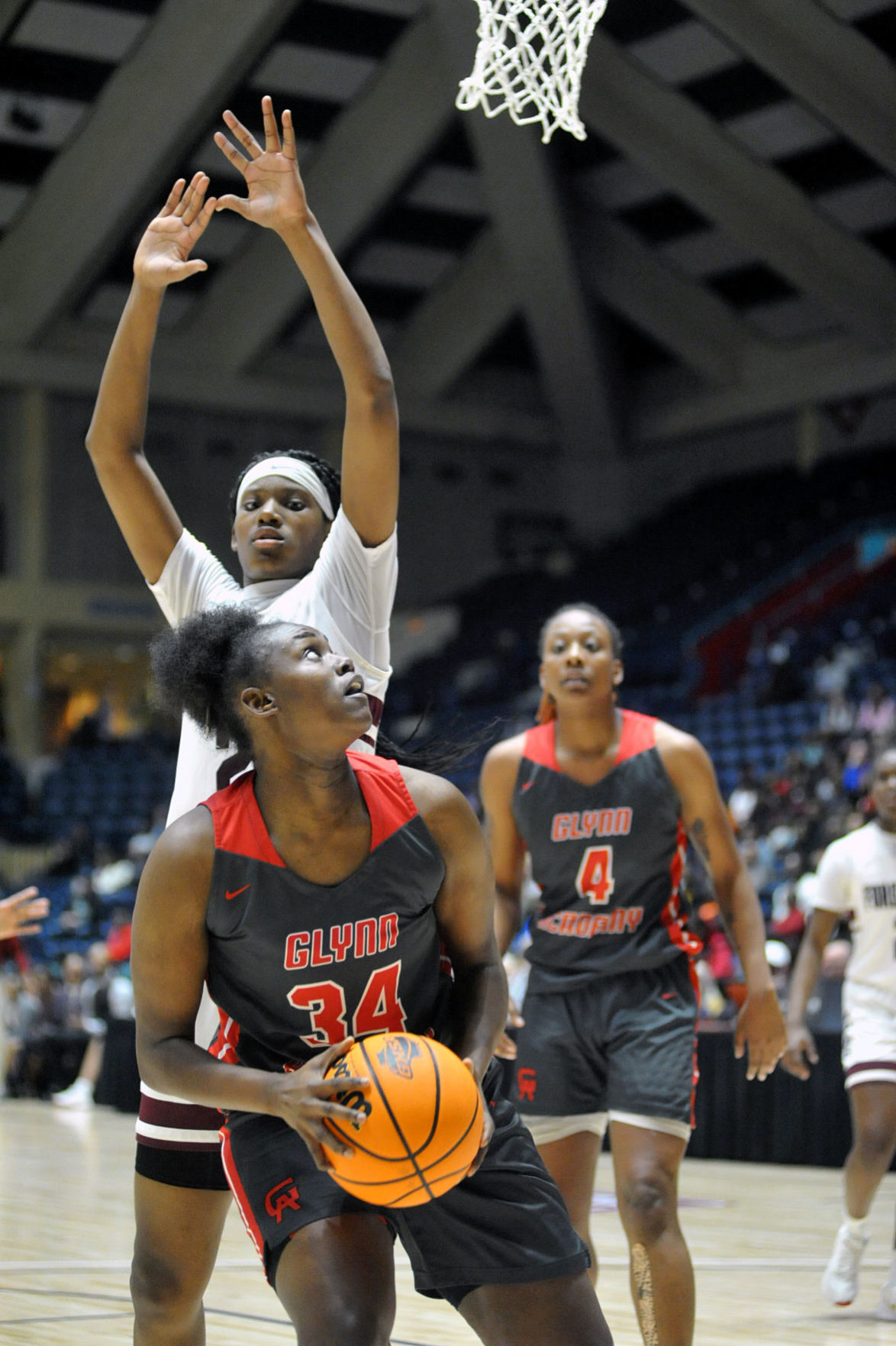 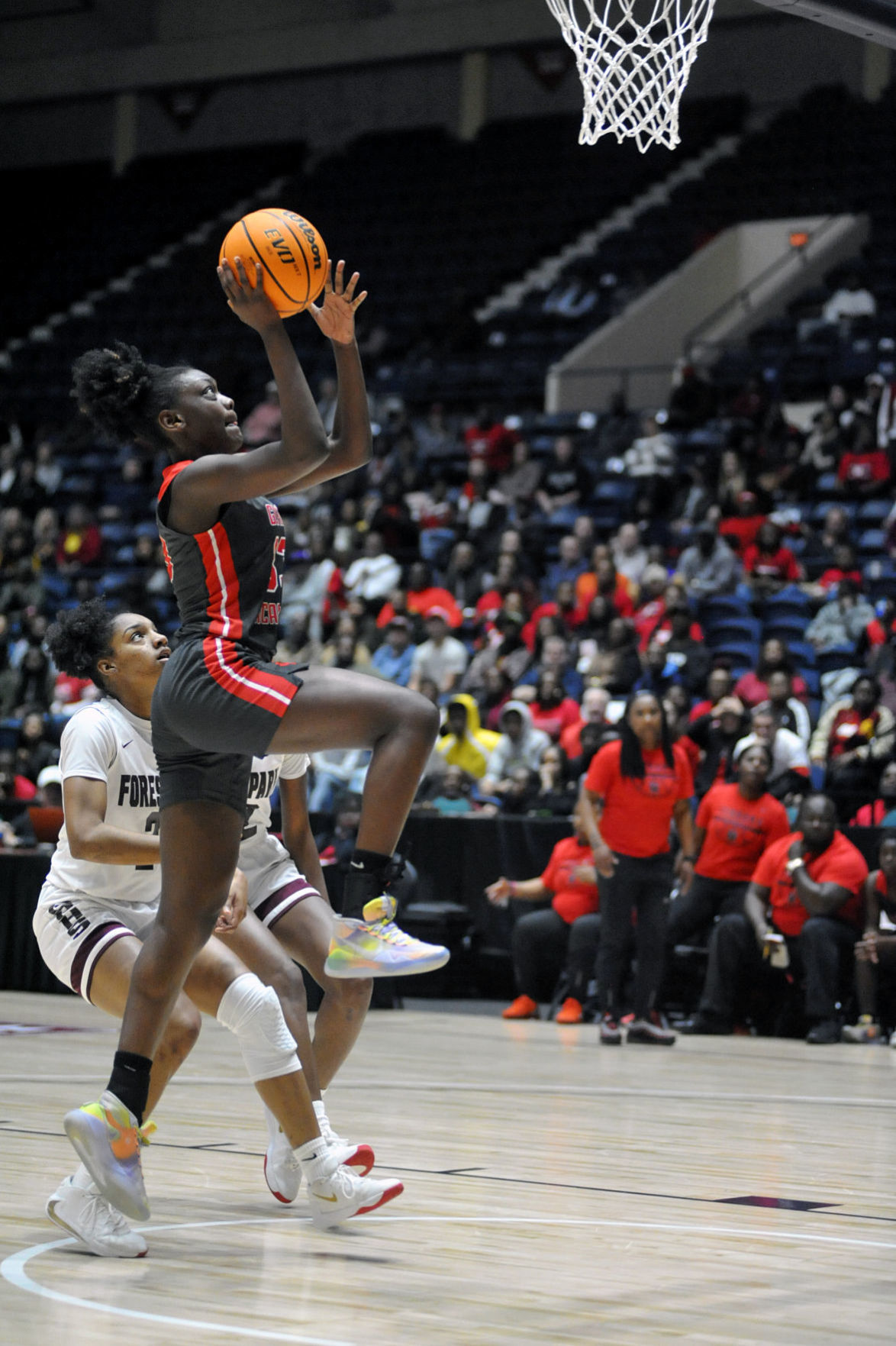 Glynn Academy’s Shamya Flanders drives to the basket for a layup against Forest Park in the GHSA Class 6A state championship game Saturday in the Macon Centreplex. 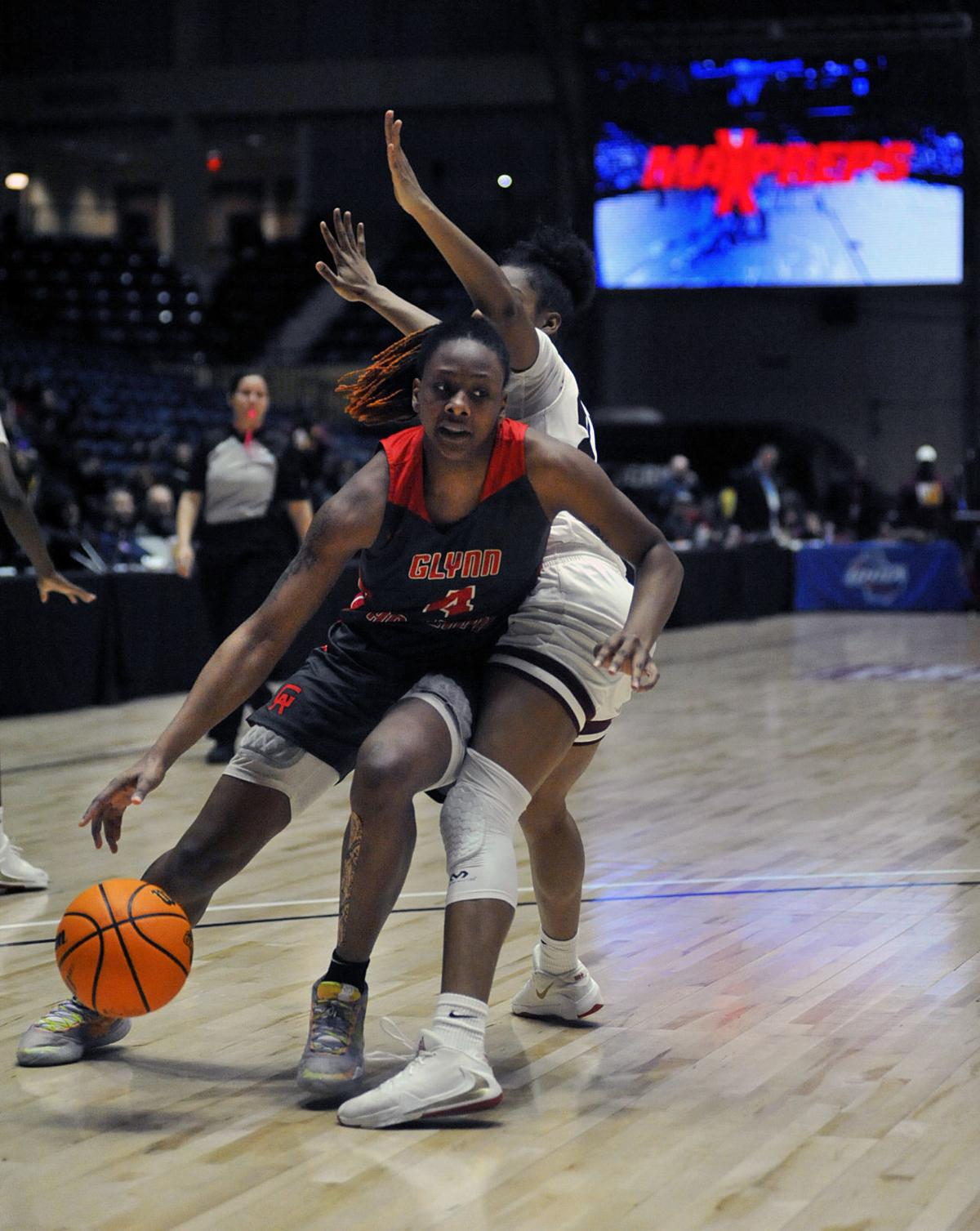 Glynn Academy’s Zoesha Smith drives to the basket against Forest Park in the GHSA Class 6A state championship game Saturday in the Macon Centreplex. 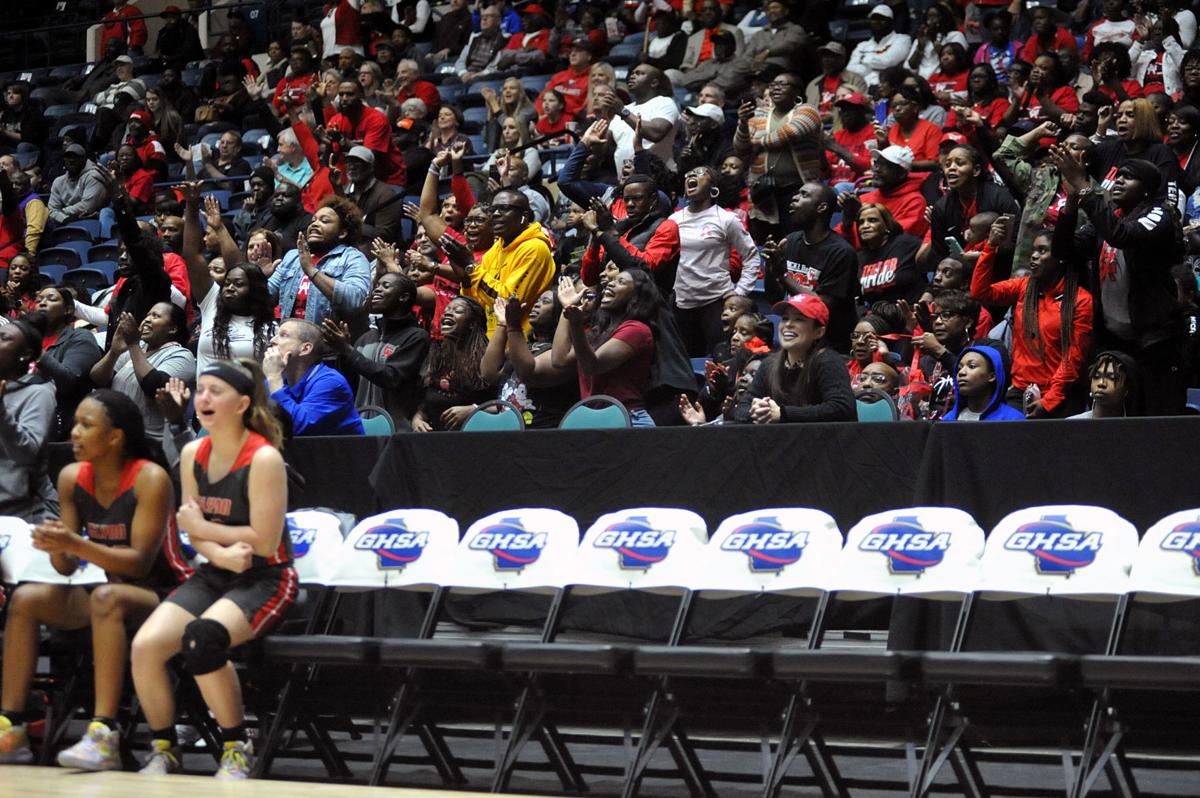 Terror fans react during the GHSA Class 6A state championship game between Glynn Academy and Forest Park on Saturday at the Macon Centreplex. 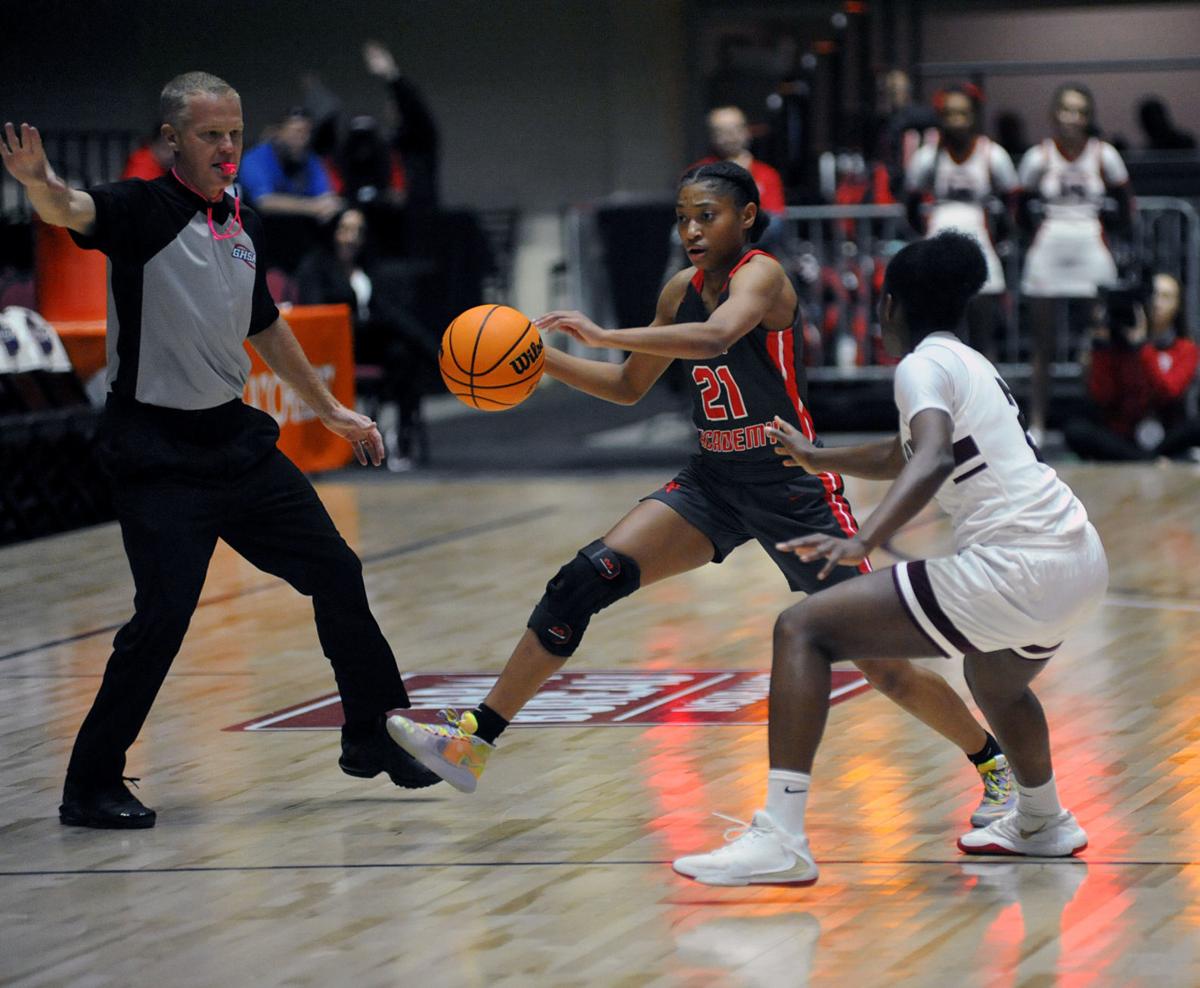 Glynn Academy’s Talia Hamilton handles the ball during the GHSA Class 6A state championship game against Forest Park on Saturday at the Macon Centreplex.

Glynn Academy’s Shamya Flanders drives to the basket for a layup against Forest Park in the GHSA Class 6A state championship game Saturday in the Macon Centreplex.

Glynn Academy’s Zoesha Smith drives to the basket against Forest Park in the GHSA Class 6A state championship game Saturday in the Macon Centreplex.

Terror fans react during the GHSA Class 6A state championship game between Glynn Academy and Forest Park on Saturday at the Macon Centreplex.

Glynn Academy’s Talia Hamilton handles the ball during the GHSA Class 6A state championship game against Forest Park on Saturday at the Macon Centreplex.

A disastrous first quarter put a massive dent in Glynn Academy’s bid for its first state championship, and it was never able to recover, falling to Forest Park 46-30 on Saturday at the Macon Centreplex.

The Terrors shot 0-11 from the field, turned the ball over six times, and fell behind 13-2 — a hole that was just too large against a long, talented Panthers squad.

Just as Glynn head coach Sharnesha Smith expected, Forest Park jumped into its full-court press from the opening tip, and it feasted on the Terrors’ early miscues to race out to a 5-0 lead less than a minute into the game.

“Put it down as mental errors,” Coach Smith said. “Being able to shake back, being able to take pride in what you do, and we didn’t seal the deal.

“We talked about that. I said the game was going to be more mental than it would be physical, and we didn’t step up to the mental battle.”

Forest Park scored seven points of Glynn Academy turnovers in the first quarter, using its size and length to get a hand on passes and challenge shots in the paint. A pair of free throws by Talia Hamilton within the first two minutes were the only points the Terrors would score in the opening period.

Glynn Academy didn’t make its first field goal until Zoesha Smith’s layup cut the deficit to 14-4 with 6:35 remaining in the first half.

Despite the slow start, the Terrors fought themselves back into the game by halftime as they outscored the Panthers 11-8 in the second quarter to go into the locker room trailing just 21-13. At that point, Glynn was just 3-of-20 from the field compared to 7-of-15 for Forest Park, but it felt as if the Terrors had finally stolen the momentum with a 6-1 run to close the half.

A layup by Smith drew Glynn Academy within six points, further energizing Terror Nation, which made the trip to Macon in droves. However, Forest Park scored six points on its next two possessions, finishing consecutive and-one baskets with free throws to quickly push its lead back to double digits.

Although the Terrors played better basketball in the second half, they were never able to make a serious push with a conglomerate of factors working against a comeback.

Due to its lead, Forest Park was able to dictate the pace of the second half, often holding the ball near mid court and forcing Glynn to extend its defense with the clock working against it. But the Terrors were also often unable to defend without eliciting a whistle in the second half, especially the fourth quarter.

Each team shot 10 free throws in the first half with Glynn and Forest Park called for eight and 10 fouls, respectively. The Terrors were whistled for 16 fouls over the final two quarters while the Panthers were assessed just five fouls.

The result: a 23-2 free throw disparity favoring Forest Park in the second half.

“I don’t ever like to blame the refs. I don’t. I really don’t because we didn’t do what we were supposed to do. But when you look up and its 15 to three in fouls, that doesn’t sit well. That’s not good. You didn’t send a good message to a championship game. It is what it is though. I’m not going to blame it on the refs. Again, we didn’t do our part, but it does play a major factor when I’ve got my kids look over to me and say, ‘What are we supposed to do?’”

For as maddening as the foul calls could be at times, the Terrors also never played up to the standard of the team that had won 14 straight games entering Saturday.

Georgia Gatorade Player of the Year Sania Feagin made it difficult for Glynn Academy to get anything going inside, finishing with three blocks and three steals in addition to 10 points and five rebounds. Smith pulled down 14 rebounds and scored a game-high 15 points on 6-of-18 shooting, but the rest of the Terrors were just 4-of-27.

“Coming up short, obviously that’s not what we wanted, but I always give credit where credit is due, hats off to Forest Park, they’re a really good team,” Coach Smith said. “We had our work cut out for us, we knew that from the jump. Things just didn’t go our way.

“We didn’t have some players step up like they were supposed to. I thought they were the tougher team in some aspects of the game. It happens. We just take it, learn from it, and move on.”

Hamilton went 0-of-5, finishing with two points and seven turnovers. La’Trinity Best struggled a bit against the length of Forest Park inside, scoring just four points on 1-of-9 shooting.

One positive development for the Terrors is, among a senior-laden rotation, freshman Shamya Flanders possibly made the greatest impact on the team outside Smith, dropping in four points and five rebounds in 19 minutes of action.

Although seven members of what was likely the best team in the history of the Glynn Academy girls basketball program are set to graduate, those same players have also helped develop a culture that should have the Terrors contending for years to come.

“Obviously we had one amazing year, one amazing run,” Coach Smith said. “Super proud of our seniors, the way they led this thing all three years, to be honest.

“From Day 1, they stepped in, grabbed a hold of the program, and said what it was. They set goals to chase it, and they did exactly that.”