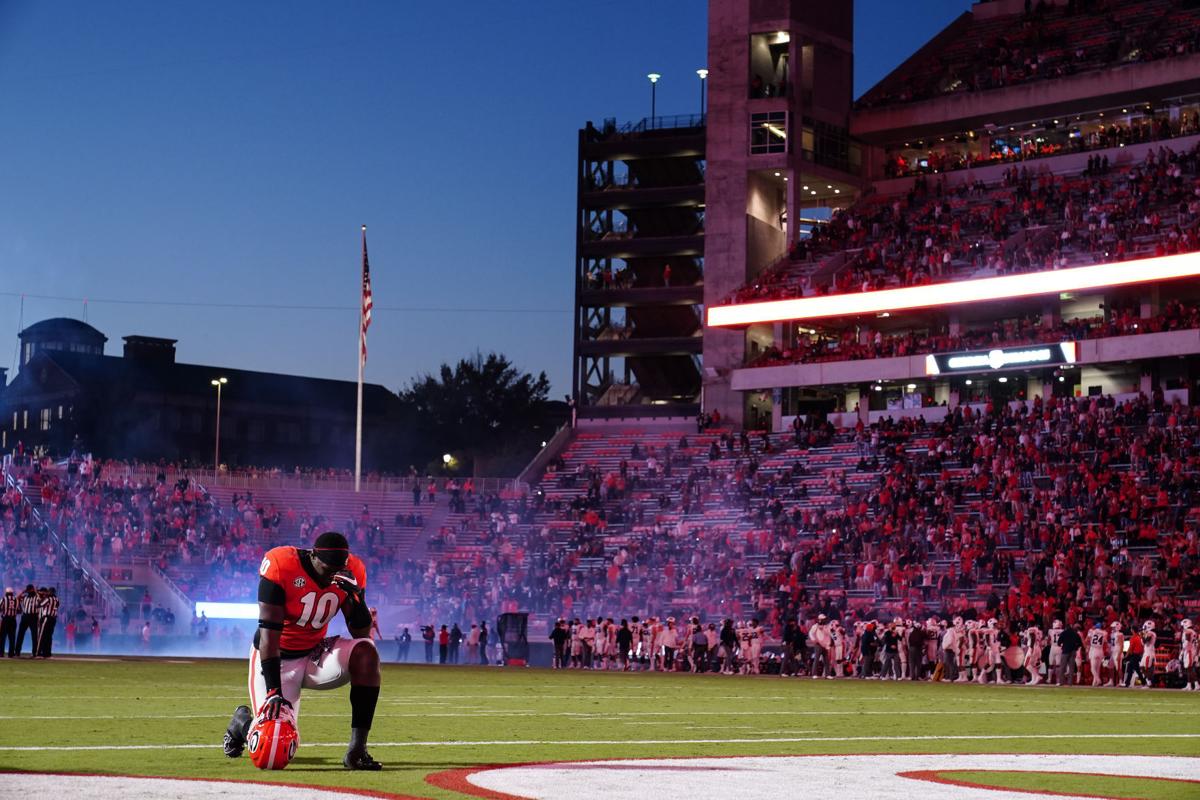 Georgia defensive lineman Malik Herring kneels on the field before the Auburn game on Oct. 3. 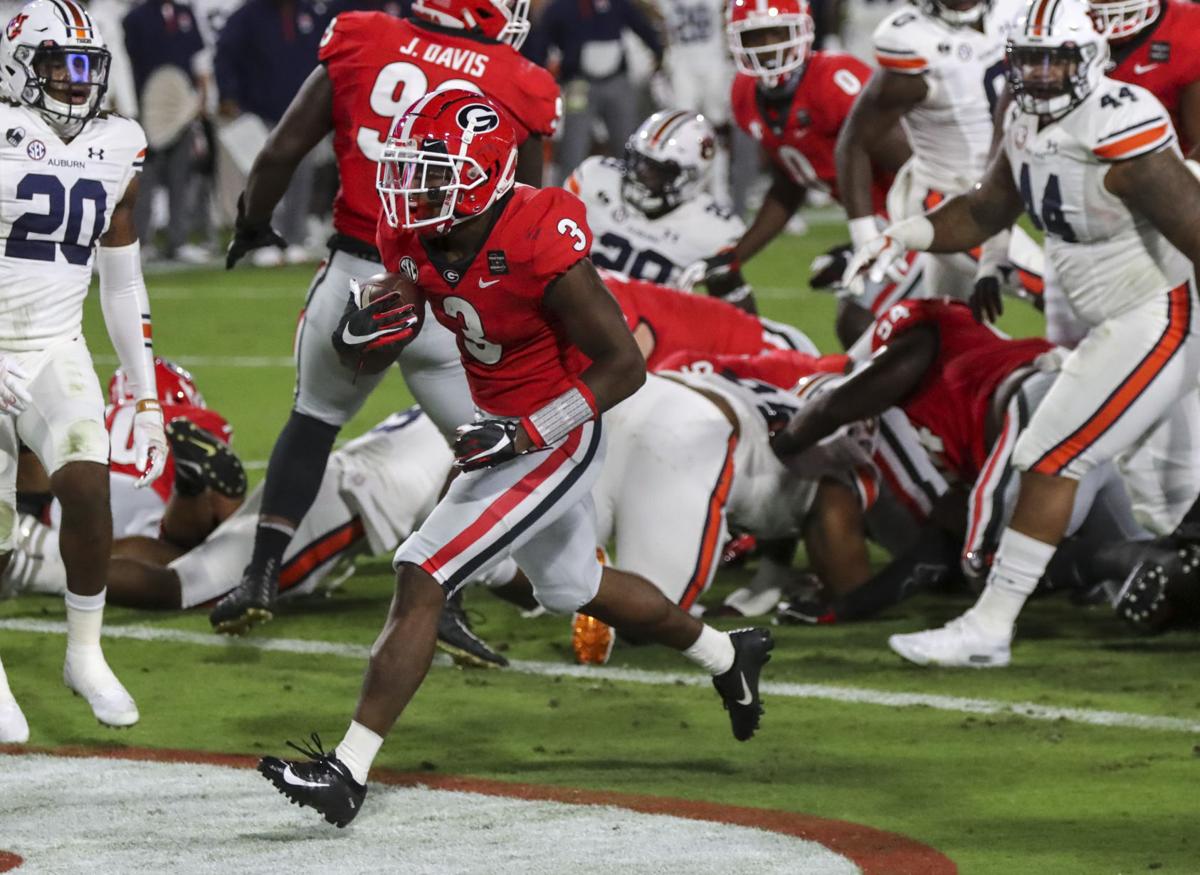 Georgia defensive lineman Malik Herring kneels on the field before the Auburn game on Oct. 3.

Well, I was hoping this column would be full of how Georgia’s football team finally overcame the hump of Alabama, but it’s not.

With golf on the west coast again, let’s talk about these Bulldogs and that tough loss.

While losing to Alabama is never a good time, Georgia fans need to realize this loss could end up making the Bulldogs better by the SEC Championship game.

Alabama was the better team Saturday, and the Bulldogs got dealt a tough hand on the road.

There are so many excuses, but the bottom line is Alabama was the better team Saturday night, and Georgia has to accept that.

I’m chalking the win up to the Tide’s halftime adjustments, and their powerhouse of wideouts and one of the best running backs in the country making more plays. Hats off to their defense as well — three interceptions is impressive.

The Bulldogs are still one of the most talented teams in the SEC, I know that much. But Alabama has their number, and until Georgia can figure out their offensive identity — they’ll keep losing.

It’s kind of like the Spurrier years of Florida. The Bulldogs have to go up against one of the most mentally tough coaches in college football history. However, I think if any coach can crash through that hump, it’ll be Kirby Smart.

I know, I’ve said it before, tons of Georgia media folks have said it, but the last time Georgia got their tail handed to them like that, it was against Auburn — we all know how that went.

Granted, after that performance, a normal person would feel nervous about Kentucky and Florida coming up, but at the same time, I feel like this needed to happen to this group of players.

Alabama’s playmakers are generational-type athletes, and while it stinks none of them are at Georgia, fans will love them at the next level.

Najee Harris is a gem at running back who waited his turn. As college football fans, people should praise him for his talent.

Those guys have seen just about every game-like situation, and their experience paid off for the Tide.

Georgia still managed to get three sacks, four tackles for loss and one interception. However, Alabama’s offensive line made sure to do their job and knew when Georgia was going to send those different types of blitzes.

Also, look at the fact that Alabama held possession for 33:59 while Georgia had it 26:01. Pretty big difference if you ask me, and a big key as to why the defense struggled down the stretch. It’s hard to wreak havoc for 33 minutes when the offense cannot score points.

We’ve seen quite a bit of growth for the Bulldogs through four games, but they got knocked in the mouth against Alabama.

Georgia’s wideouts couldn’t get space against the Tide’s defensive backs, which needs to be fixed.

Also, Georgia went away from toting the rock after their stable of running backs proved they could be successful against the Tide. Alabama only had two more rushing yards than Georgia.

Those are two guys averaging more than 5 yards a touch, and Georgia wants to trust its inconsistent wideouts? That’s on coaching. James Cook, a running back, had four catches for 101 yards.

George Pickens has the physical talent to be an All-American; instead, he chooses to be selfish. Pickens led the team with five catches for only 53 yards, and that’s only when he fought for separation. He’s a good athlete but needs to focus on getting better instead of the silly, immature things he’s doing.

Yes, Stetson Bennett threw three interceptions, but that kid never stopped fighting. Yes, he wasn’t his best, and you can call his performance terrible, but I want to see him start against Kentucky. I want him to prove that it was a bad game. Bennett has the biggest heart and the most to lose, and he knows what has to be fixed.

His biggest issue was not those interceptions, but the fact he missed multiple wide open guys down the field. Throughout the first three games, he did a fantastic job with his check-downs, and on Saturday, it went by the wayside.

Yeah, he’s undersized and not a five-star quarterback — who cares. Bennett loves this university, and I don’t fully trust the others in that room yet. J.T. Daniels has been cleared, but maybe isn’t quite ready yet physically. Either way, give Bennett another shot — one bad game shouldn’t lose him his job.

There were three crucial mistakes in Saturday’s game, and those kinds of errors can take it out of the best units, no matter how physically talented they are.

If it weren’t for the 90-yard touchdown to Jaylen Waddle when Tyson Campbell fell, Jermaine Burton didn’t have the ball intercepted when it came off his hands, and the bogus pass interference call on Eric Stokes — this game wouldn’t have ended the same.

No, it’s not the refs’ fault Georgia lost, but there were a few missed calls that could have changed the momentum — oh wait, there were, and they all went in favor of the Tide. That’s my only referee comment because the Tide still did more to win.

Sometimes great teams lose to get better and find the right path.

It happened in 2017, and we saw what happened. However, this season, it’s early enough that the Bulldogs can work on things and prepare for the SEC Championship showdown with Alabama.

Hopefully, Georgia just had to get smacked in the mouth one good time, and now, they’ll be good for the remainder of the season.

Thankfully, the Kentucky game got pushed back a week, and the Bulldogs can use this upcoming off week to figure out things and remember to run the dang ball.