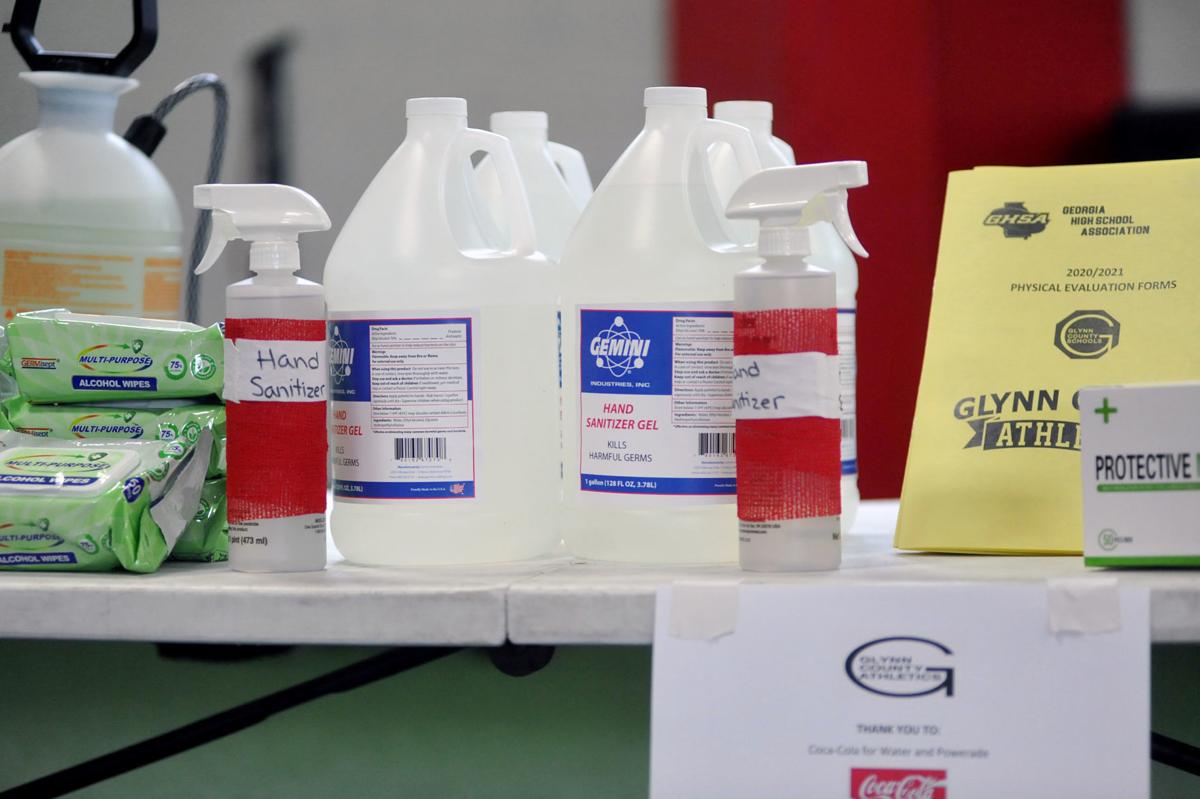 Cleaning supplies are on display inside the Glynn Academy fieldhouse Thursday. 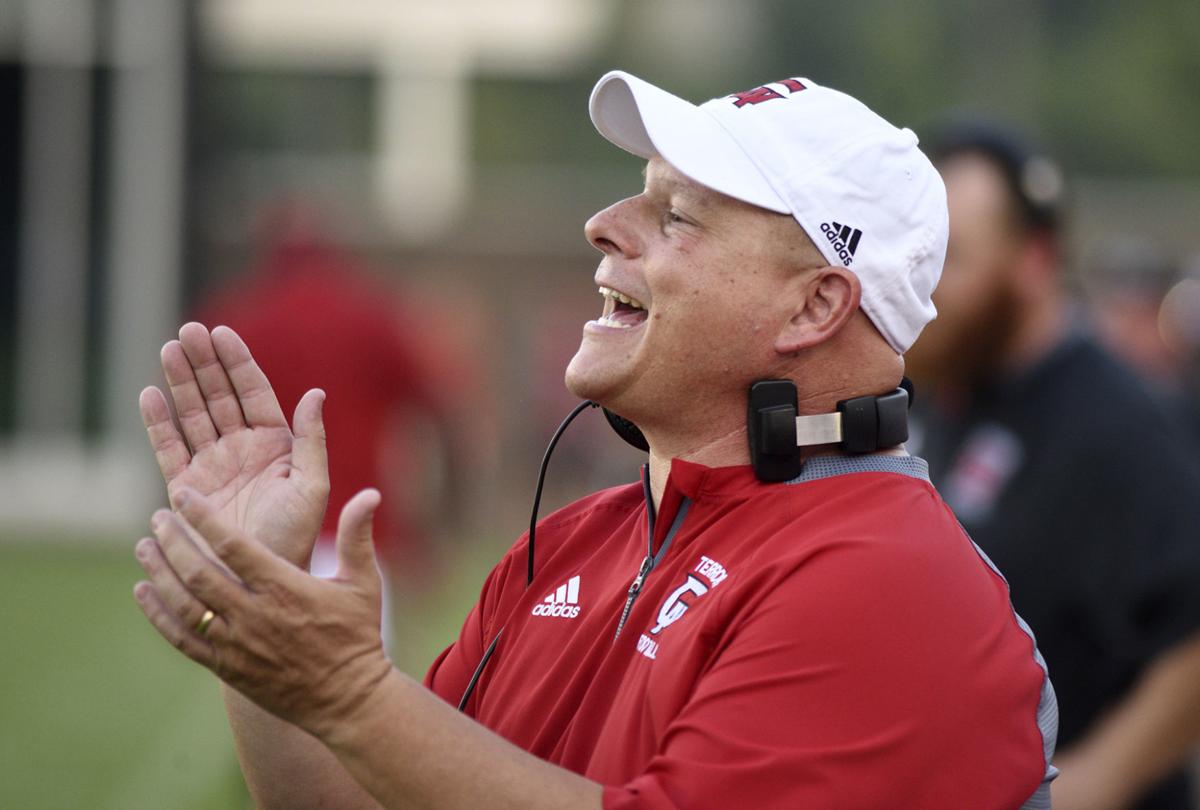 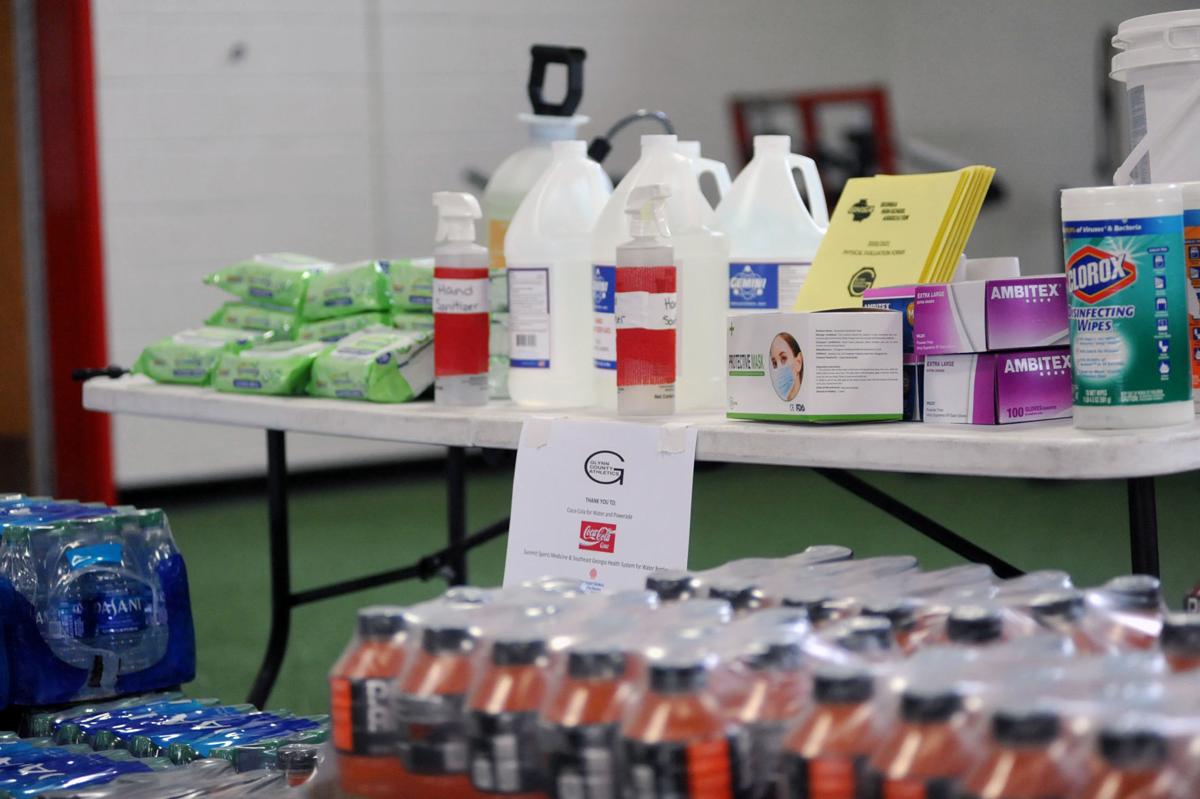 Cleaning supplies, bottles of water and Powerades are on display inside the Glynn Academy fieldhouse Thursday.

Cleaning supplies are on display inside the Glynn Academy fieldhouse Thursday.

Cleaning supplies, bottles of water and Powerades are on display inside the Glynn Academy fieldhouse Thursday.

Glynn Academy head football coach Rocky Hidalgo announced via Twitter on Sunday evening that the Red Terrors would suspend workouts until July 6 after one player tested positive for COVID-19.

The novel coronavirus has seen a recent resurgence in the Golden Isles over the past month, and now it’s infiltrated Glynn County Athletics.

“In an attempt to be proactive against the spread of COVID-19 in our community, the Glynn Academy Red Terrors’ football program is suspending workouts until July 6th. This is in response to one of our players testing positive Sunday for COVID-19,” Hidalgo said in a tweet. “At this time, we are notifying all people who may have come in contact with this player and asking them to get tested.”

The Georgia High School Association allowed member schools to enter a conditioning period June 8 — the first athletic activity permitted in the state since the suspension of play March 12.

Over the past two weeks, football, baseball, softball, and track and field athletes at Brunswick High and Glynn Academy have resumed workouts, albeit under strict regulations and guidelines, among which limit the number of players and coaches per group and call for COVID-19 screenings of participants before each workout.

But the first setback came Sunday evening when Hidalgo learned about a positive test from one of his players.

In a credit to Glynn Academy’s administration, coaching staff, trainers and team physician Dr. Beau Sasser, swift action was taken in notifying players and coaches within the same group, and putting a plan in place to limit further exposure.

“As an athletic director, I couldn’t be prouder of Glynn Academy’s coaching staff, and also Dr. Sasser and his sports medicine team,” said Glynn County athletic director Steve Waters. “You always have protocols and policies, but you hope you never have to use them. For that to go into effect on a Sunday, it showed that we were ready for a situation.”

The player who tested positive will quarantine for 14 days, and he’ll be required to produce a negative test before he can return to practice — the same is true for the other 16 players and three coaches making up the group.

Although various workout groups are forbidden from intermingling during the conditioning period, many players are friends and congregate outside of practice, and with only four workouts scheduled before the dead period begins next week, the decision was made to suspend workouts until July 6.

“I just kind of shut down. It’s only four days of workouts and conditioning. It’s not going to be the be-all, end-all,” Hidalgo said. “That was my mindset with it. To be safe and proactive about things would be better than having an outbreak amongst the team.”

The temporary shutdown of Glynn Academy football comes the same day GHSA loosened restrictions on summer workouts, allowing groups to expand to 50 and begin use of sports-specific equipment.

Brunswick High’s football team held practice Monday and will continue its scheduled workouts the remainder of the week.

The cleaning is likely just precautionary as none of the Terrors’ other athletic teams share facilities with the football team, and for Hidalgo’s money, the players who tested positive for the virus contracted it elsewhere.

“Our coaches have done a great job keeping the groups or getting their kids out of here before another group comes on and making sure kids don’t socialize with other groups come in. So I don’t think that had anything to do with it,” Hidalgo said. “I would be very surprised to see if our kids picked up COVID-19 in the weight room or at the workouts because we’ve stayed on that throughout this whole process. We’ve been following the guidelines, and it wasn’t anything I felt we did on our end.”

COVID-19 cases have been on the rise in Glynn County recently.

Gov. Kemp lifted the statewide shelter-in-place order May 1, and at that time, Glynn County had 58 confirmed cases of COVID-19. As of 3 p.m. Monday, the number of cases in the county has risen to 308, with 119 new cases confirmed since June 15.

According to the Coastal Health District, the seven-day rolling average of new COVID-19 cases in Glynn County previously peaked at 6.14 on June 2. That average has been surpassed in each of the past seven days, now peaking at 16.71 cases.

A baseball coach at Brunswick High also tested positive for COVID-19 within the last couple of days, though the coach has not had contact with any players and has not been to the facilities since the end of May. The team will be allowed to continue practicing while the coach will be quarantined for 14 days.

At least some of the increase in positive cases can be explained by the increased testing in Glynn County. Last week, Glynn County produced its second straight week with a new high in total tests with 1,104 total tests were administered — more than doubling the pervious high of 525 tests from June 8-14.

Altogether, 3,832 total tests have been administered in Glynn County since March 20.

Rising cases have raised concerns about a fall school semester across the state. Waters said he’ll attend a meeting at the GHSA headquarters in Thomson on Wednesday to discuss the the viability of moving into the next phase of a return.

“Eventually, they’re going to have to make a decision that we’re going to go to school, and we’re going to play sports, in spite of COVID, or we’re just going to shut things down,” Waters said. “Right now, we’re just kind of playing the game, and trying to get our kids in shape just in case there is a season.

“Right now we’re planning on there being a season and it starting on time, but with the rising cases, I just don’t know what their decision is going to be.”