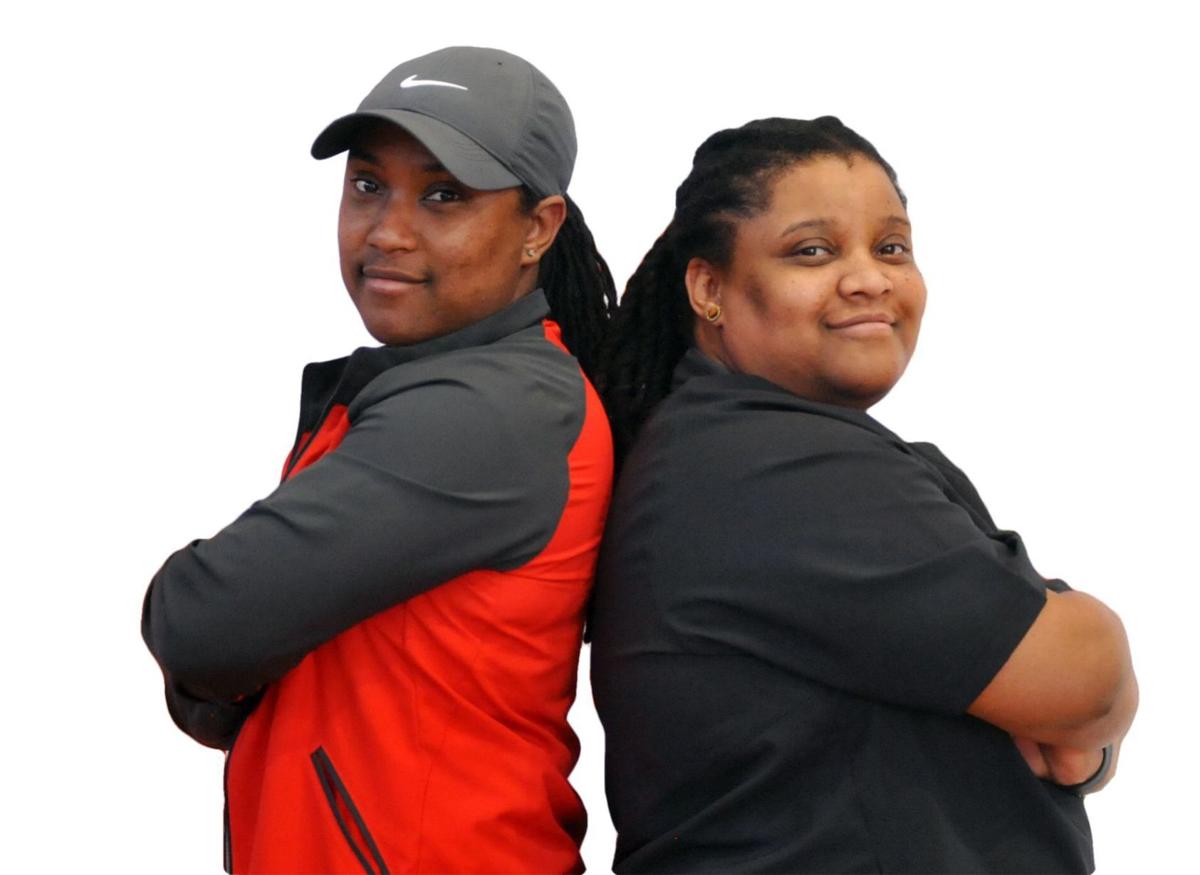 Glynn Academy head coach Sharnesha Smith, left, and her sister/assistant coach Shayla have another chance at winning a state title with the Terrors. 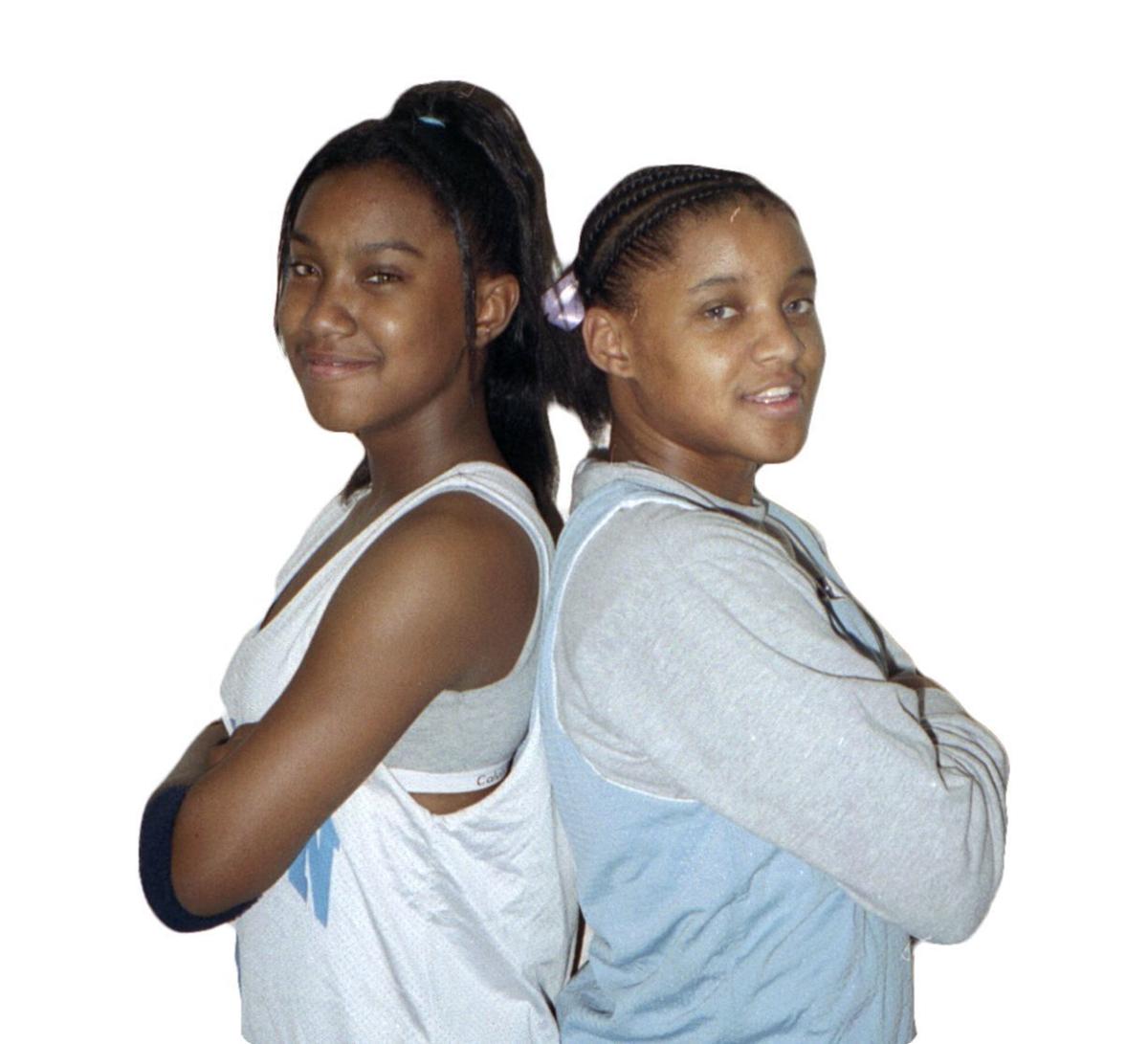 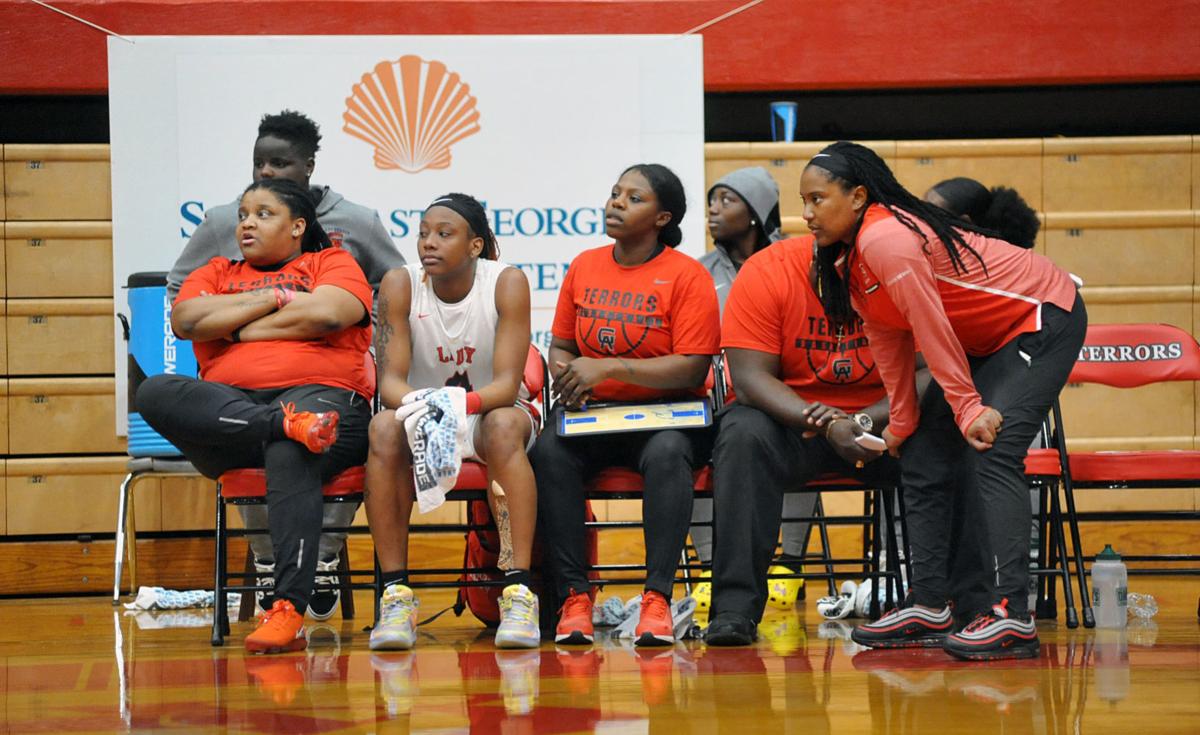 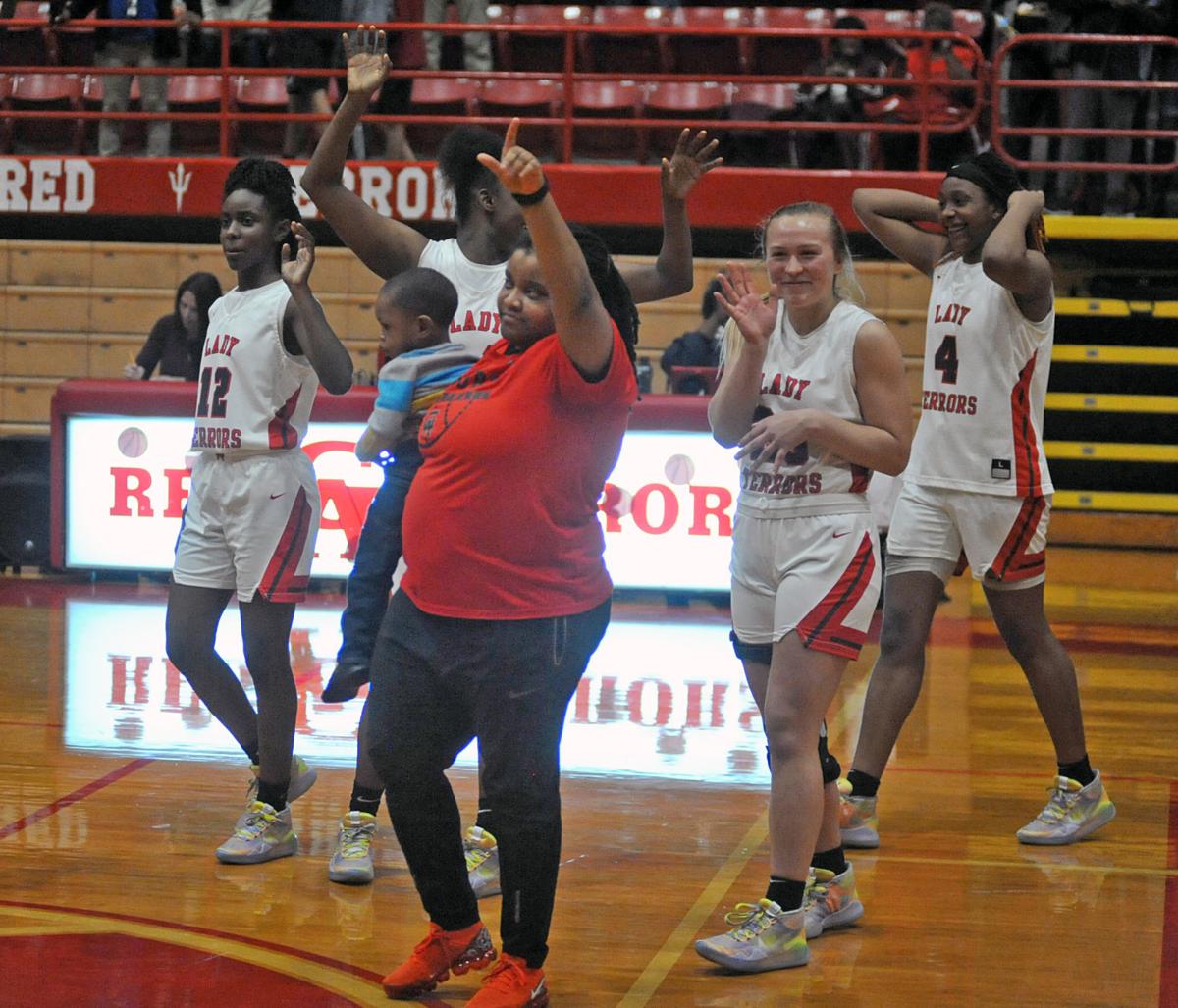 Glynn Academy assistant coach Shayla Smith signals to the crowd while celebrating a quarterfinal victory over Johns Creek at The Glass Palace. 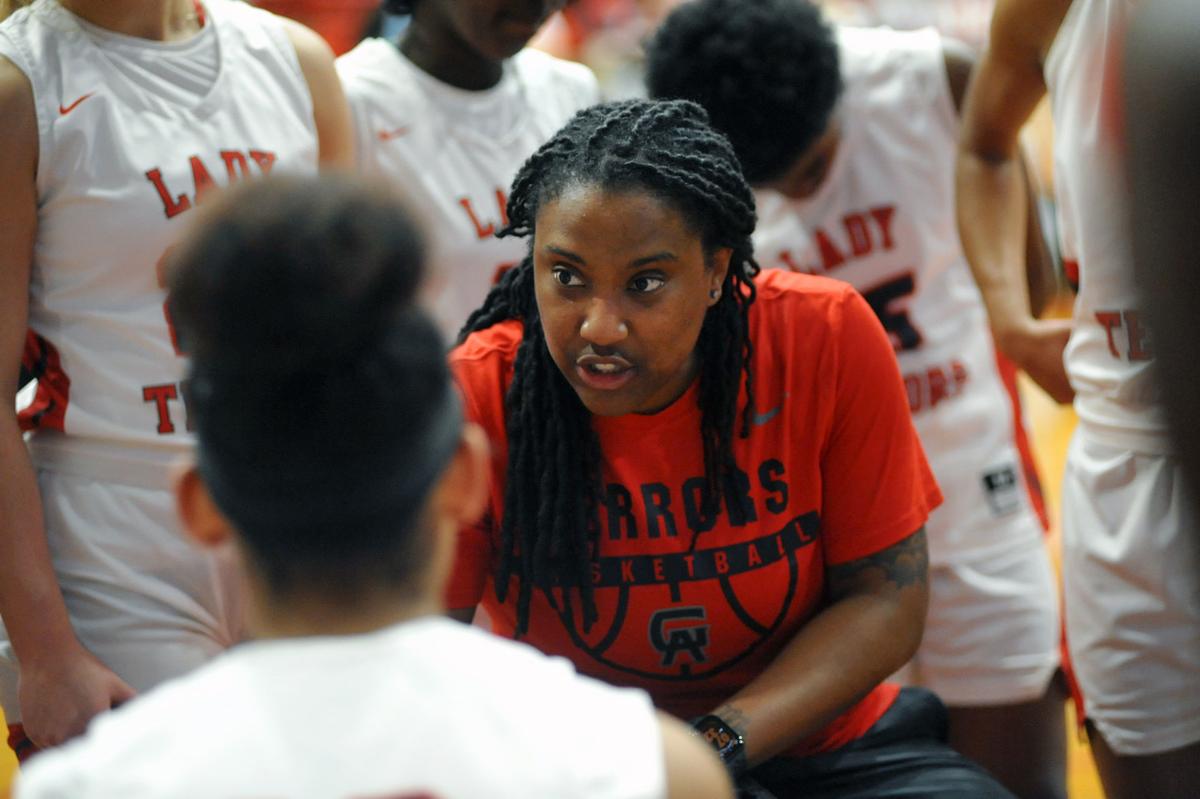 Glynn Academy head coach Sharnesha Smith, left, and her sister/assistant coach Shayla have another chance at winning a state title with the Terrors.

Glynn Academy assistant coach Shayla Smith signals to the crowd while celebrating a quarterfinal victory over Johns Creek at The Glass Palace.

Terrors head coach Sharnesha Smith and assistant coach/sister Shayla have dreamed of this opportunity for a long time.

Not only since the Smiths arrived at Glynn Academy — that was just three years ago. No, Sharnesha and Shayla have longed for a shot at a state championship since the moment a single shot dropped through the net at the buzzer 18 years ago.

At that time, Sharnesha and Shayla were high school athletes looking to carry Camden County to a title, and they were just seconds away from advancing to the championship until it all came crashing down on a Meadowcreek buzzer beater in the Macon Centreplex.

The Final Four loss ended the prep career of Shayla, who was a senior on Camden’s 2001-02 team, and despite three more years with the program, Sharnesha never returned to the semifinals.

Now, at the scene where they came up short as players, the Smiths have the opportunity to finally capture their state championship as coaches.

“It’s actually 18 years to the day Saturday,” Shayla said. “That was my 18th birthday. So it wasn’t a good memory leaving the Centreplex, but it’s definitely different this time, going in as a coach.

“It’s a great opportunity. I’m looking forward to it. These girls, just the excitement all around it, we’re going to be ready, and I’m super excited to be a part of it again.”

Sharnesha added: “It was a heartbreaking game that we just remember. We never got past that point, so as a coach, to be coaching in a Final Four game, and of course get past that point, now to a state championship run, that’s huge.”

Sharnesha and Shayla aren’t the only ones with a crystal clear memory of their run at a state title as players.

Camden girls head coach Keith Ellis — who earned his 400th win with the program last month — coached the Smiths during their time as Wildcats, and he can perfectly recall the specific season nearly two decades after the fact.

Shayla was the starting point guard on a team that used a four-guard starting lineup that also included Sharnesha to go toe-to-toe with some of the best teams in the state with its quickness and a high level of skill.

“Shayla was a coach on the floor,” Ellis said. “The great thing about her was Shayla was a great defensive player, on the ball defense. She would go three or four games without any turnovers, and that’s uncommon for a point guard.

As much as she handled the ball, she was one of those point guards where she wasn’t going to be flashy, and fancy, and around the back, but you were not going to get that basketball from her.”

He continued: “Of course Sharnesha, on that particular team, was a freshman, so big sister and little sister used to have their rounds. I can recall a couple of times Shayla was really getting on her little sister, and I’m sure they even have their disagreements right now, but that was just part of the game.

“With Shayla being the coach on the floor, she took care of a lot of little things that I didn’t have to worry about.”

At that time, Camden shared a region with Brunswick High, Glynn Academy, perennial contender Beach, and Bradwell Institute, which was No. 1 team in the state for most of the season, making for plenty of memorable battles throughout the year.

“We actually had to play Bradwell four times that year,” Ellis said. “They had went undefeated, and we beat them on their senior night on their home court. I remember it like it was yesterday. They were devastated and heartbroken.

Camden and Bradwell would ultimately meet up one final time in Elite 8, where the Wildcats came out on top in the second of three straight games to go into overtime.

Overtime victories over Lovejoy and Bradwell Institute proceeded the gutting defeat at the hands of Meadowcreek, which went on to lose the title game against Collins Hill. But in spite of the loss, the experience was one the Smiths each grew from.

“We didn’t have the most athletic kids or none of that; we just knew exactly what we needed to do,” Sharnesha said. “You had kids that came every single day and worked hard. Even as a freshman, I remember being challenged every single day; not just by my sister, but other girls that didn’t go on to play college basketball, but they had a goal in mind.

“We knew we wanted to be a part of something, and we just came together and made it happen. To fall short, that was a heartbreaking thing, but we learned so much about each other during that whole season. It was great.”

Shayla went on to play four years at UCF, where her name can still be found among the program’s all-time leaders in assists and 3-pointers. A few years later, Sharnesha closed out her Camden career as the record holder for assists and steals before committing to Stetson, where she became one of just 11 players in program history to tally at least 1,000 points and 250 assists.

Still looking to be a part of the game, Sharnesha joined the coaching ranks when her playing career came to an end, serving two years at Augusta State and three years at Flagler before getting her first shot as a head coach at Glynn Academy ahead of the 2017-18 season.

“I got the experience of being an assistant at Division II for five years, I had two different college jobs, I played Division I basketball,” Sharnesha said. “The lessons I learned as a player, and then as an assistant, picking up on some things and then learning from those head coaches…

“You never feel that you’re ready to step in, but with the support system that I have, I had a lot of people, mentors, and other colleagues that are coaching now were telling me, ‘You’re ready. You’ve got to step out there. People need to know that you’re beneficial. You have a lot to prove to people,’ and then of course to impact our young ladies today. So I thought about it, and then I applied, and then I got the job as soon as I applied. So this is where I am. It’s been three years, and we’ve had an unbelievable run.”

Glynn Academy has also provided Shayla with her first coaching experience of any kind outside of summer ball. Shayla served as a community coach for the Terrors the past two seasons before fully dedicating herself to the job this year as a coach and in the school system.

In the Smiths’ first year, Glynn Academy went 14-13, dropping back-to-back games in the region championship game and the first round of the state playoffs to end the season. In the second, the Terrors improved to 26-5, won their first region title since 1995, and advanced to the quarterfinal round in the postseason.

Now, Glynn Academy is just one win away from capturing the first state championship in the history of the girls basketball program, and Sharnesha credits her team’s success to all the players and coaches that came before.

“The success in the program, that goes back to the foundation that was laid even before I got here,” Sharnesha said. “This is for all those girls that gave everything they had to this program, past and present. That’s what it’s about for us.”

The Terrors have been on a warpath over the last two months, winning 14 straight games since the calendar flipped to 2020, including four playoff games by an average margin of just under 21 points per contest.

It’s truly been a historic season for Glynn Academy, one that is certain to be remembered, win or lose Saturday against an equally-dominant Forest Park. But if Ellis has learned anything from his storied career, it’s been to take advantage of these kind of moments because you’re not guaranteed to get another.

“If I had to give a message to them it’d be, ‘win it,’ because you never know when you’re going to get back,” Ellis said. “We had some great teams where we went to the Elite 8, and your teams are rolling. We had a 2007 team that made it to the Elite 8, but we never got back to that opportunity to get to that championship.

“So my message to them is to win it now.”

As former players of Ellis, it’s no shock Sharnesha and Shayla have the same mindset.

“With this unbelievable senior class that we have, I tell them all the time, ‘This is your final week of practice, this is your final week of preparation, this is your final opportunity. You’ll never play in a state championship ever again, so what are you going to do? How do you want your journey to end? What’s your story? What do you want people to say about you?’” Sharnesha said. “We’ve been preaching that all season long, you’re in control of your own destiny. Are you giving it all you got? That’s kind of been the spiel this whole playoff run…

“I always keep that in their minds, you’ve got to take advantage of every opportunity. You don’t take any opportunity for granted.”

Shayla added: “I always tell them, you never know when you’re going to get it again. Some of these girls, the only opportunity you’re going to have to go to another Final Four is if you end up in one of those big Power 5 conferences in college and have that opportunity.

“I was like, ‘Live in the moment. Don’t think ahead. We’re just one game away. It’s only one game, leave it all on the floor.’”