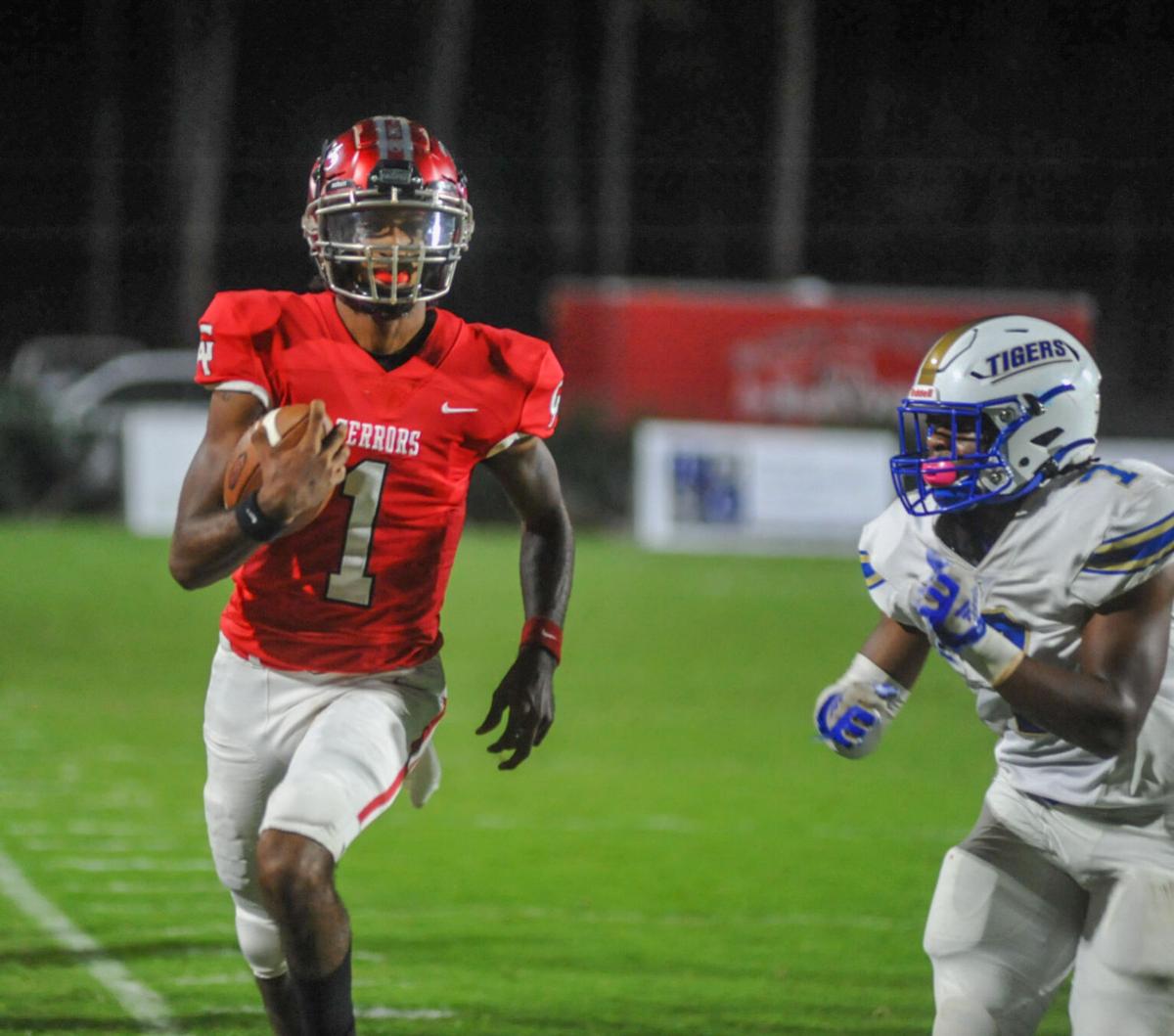 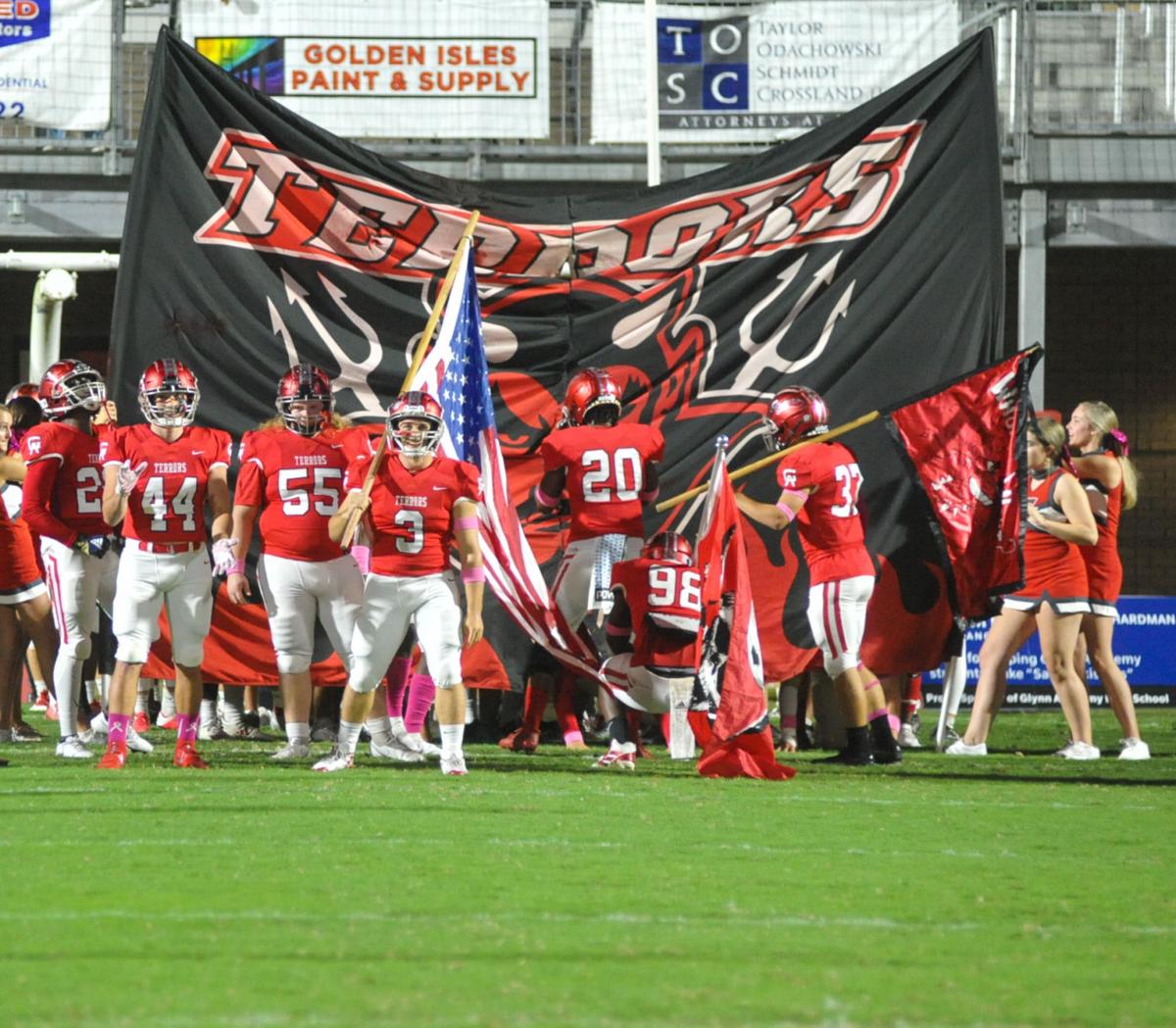 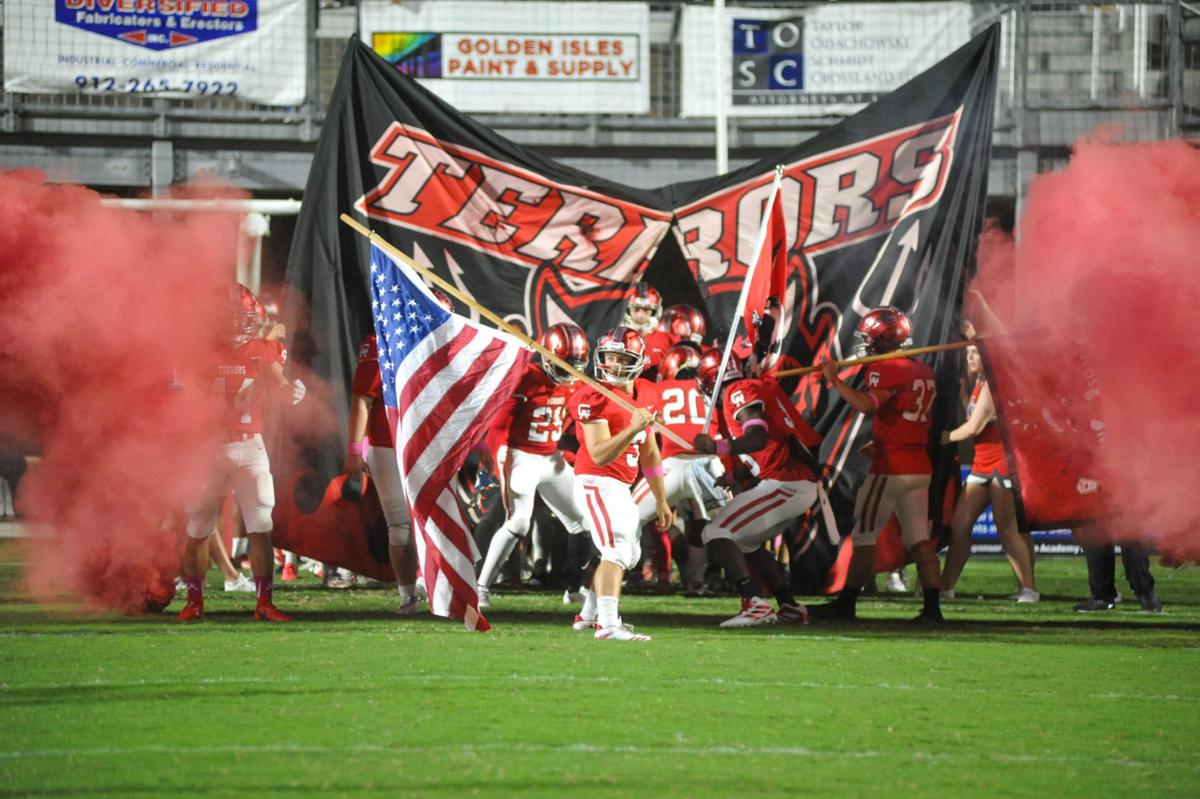 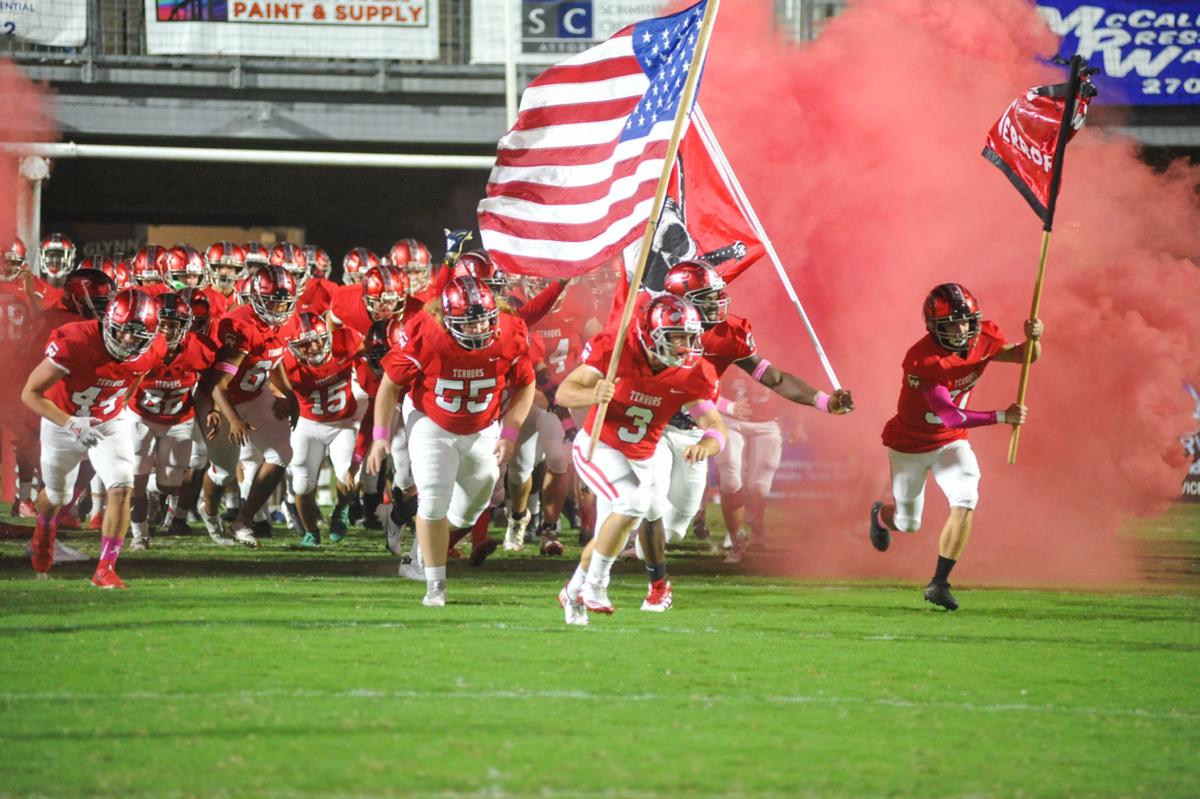 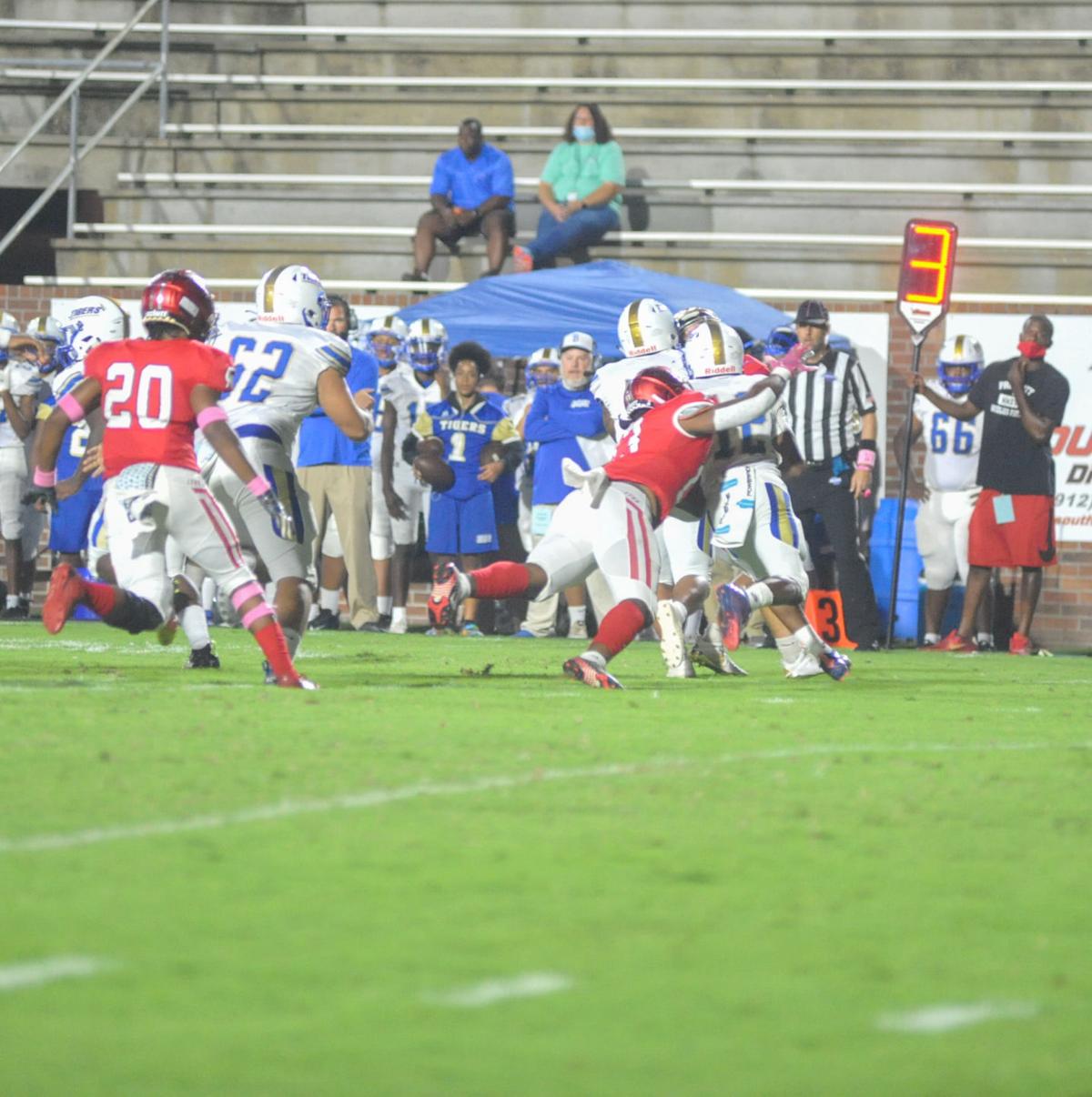 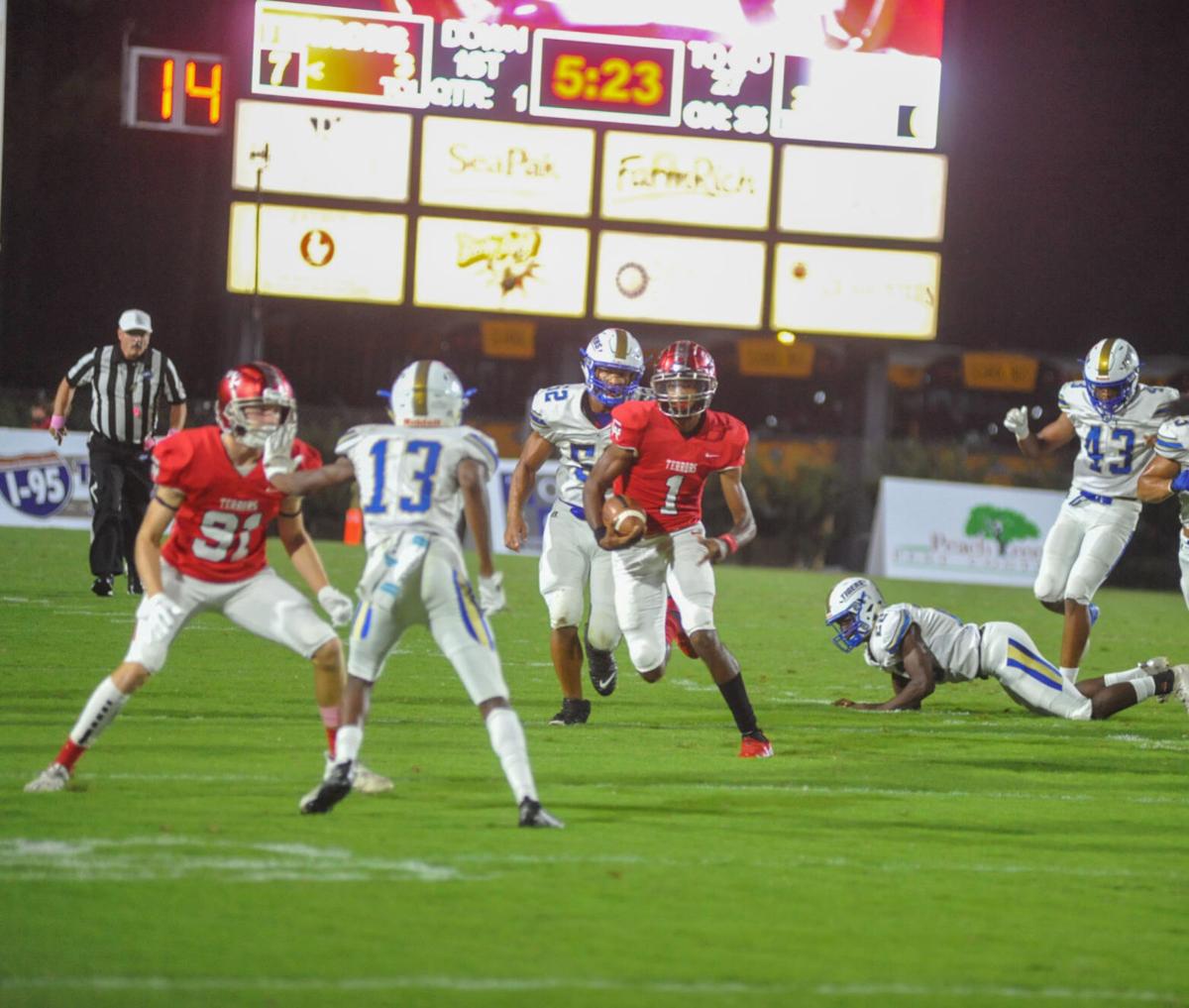 T.J. Lewis looks downfield as he runs the football against Bradwell Institute on Friday night. 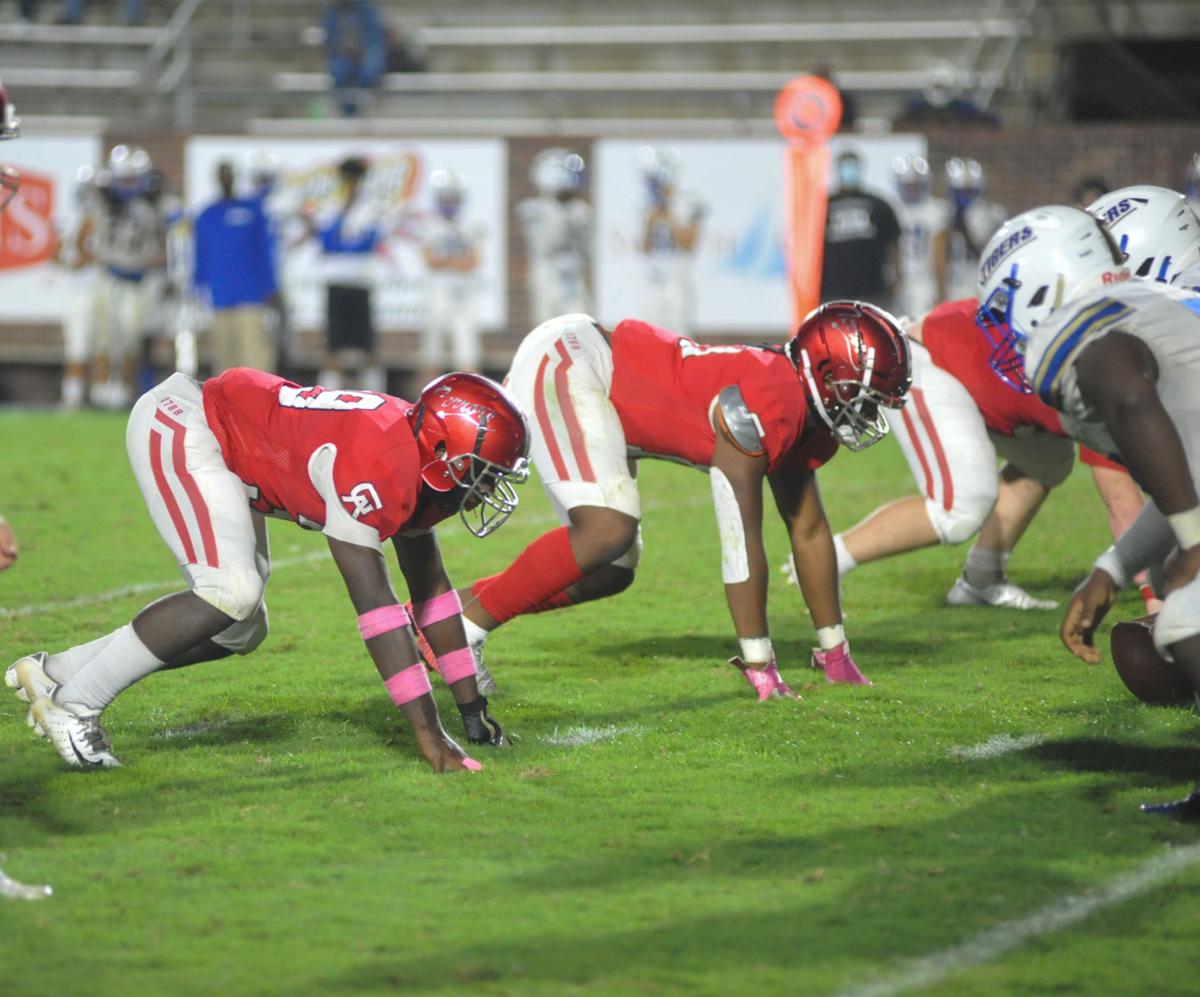 Glynn Academy's defensive line gets ready for the snap. 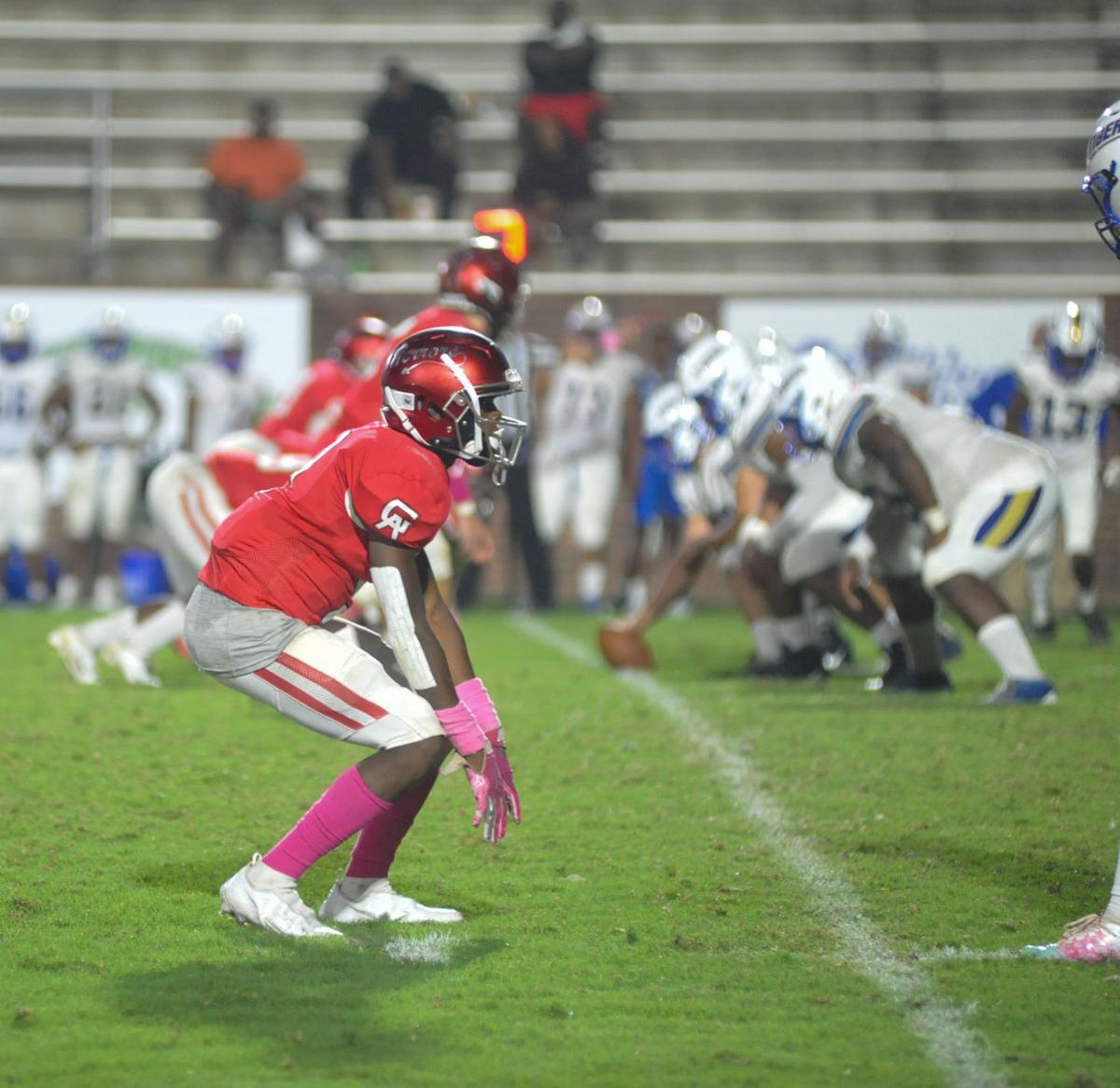 D'Marion Hayes lines up on defense. 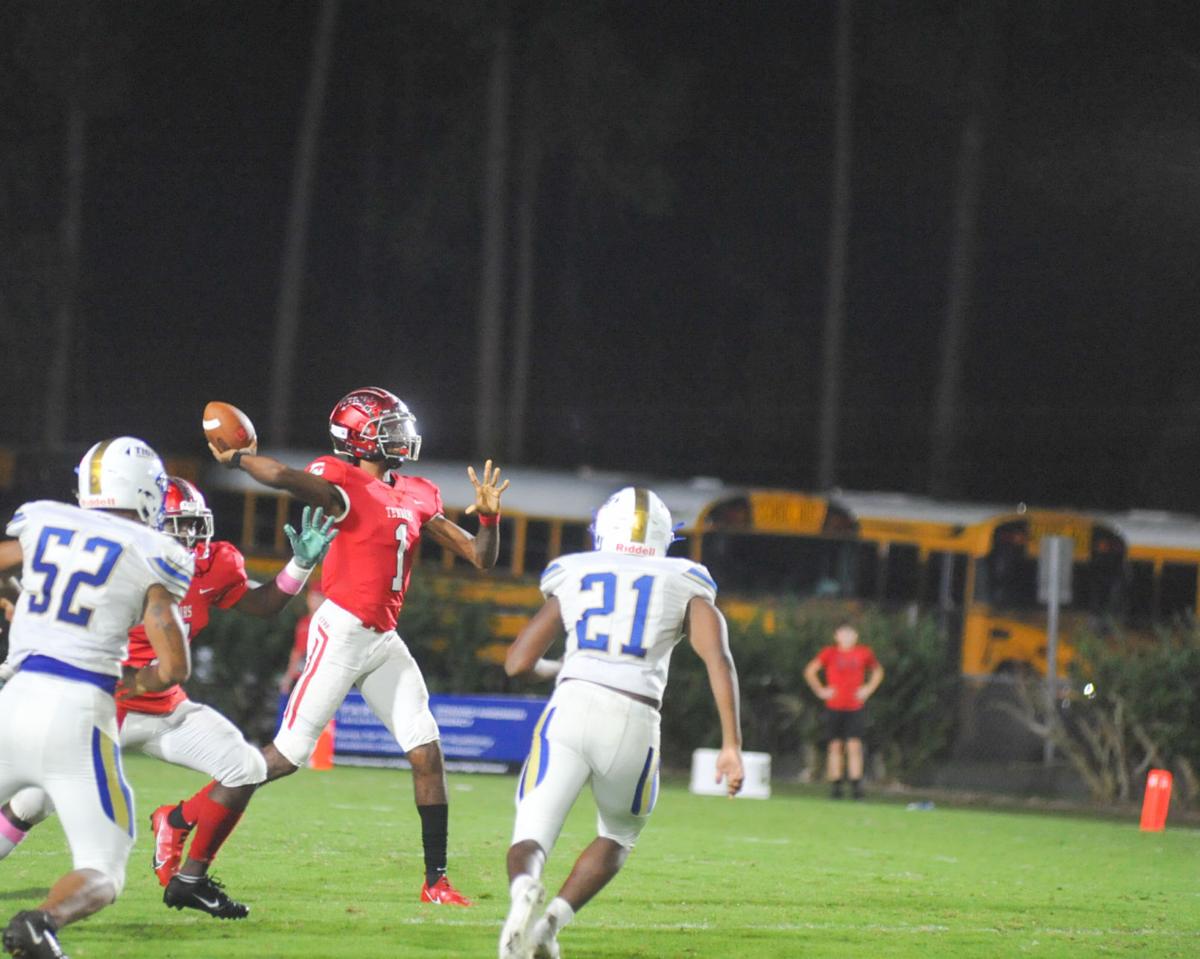 T.J. Lewis throws the ball during the Bradwell game on Friday night. 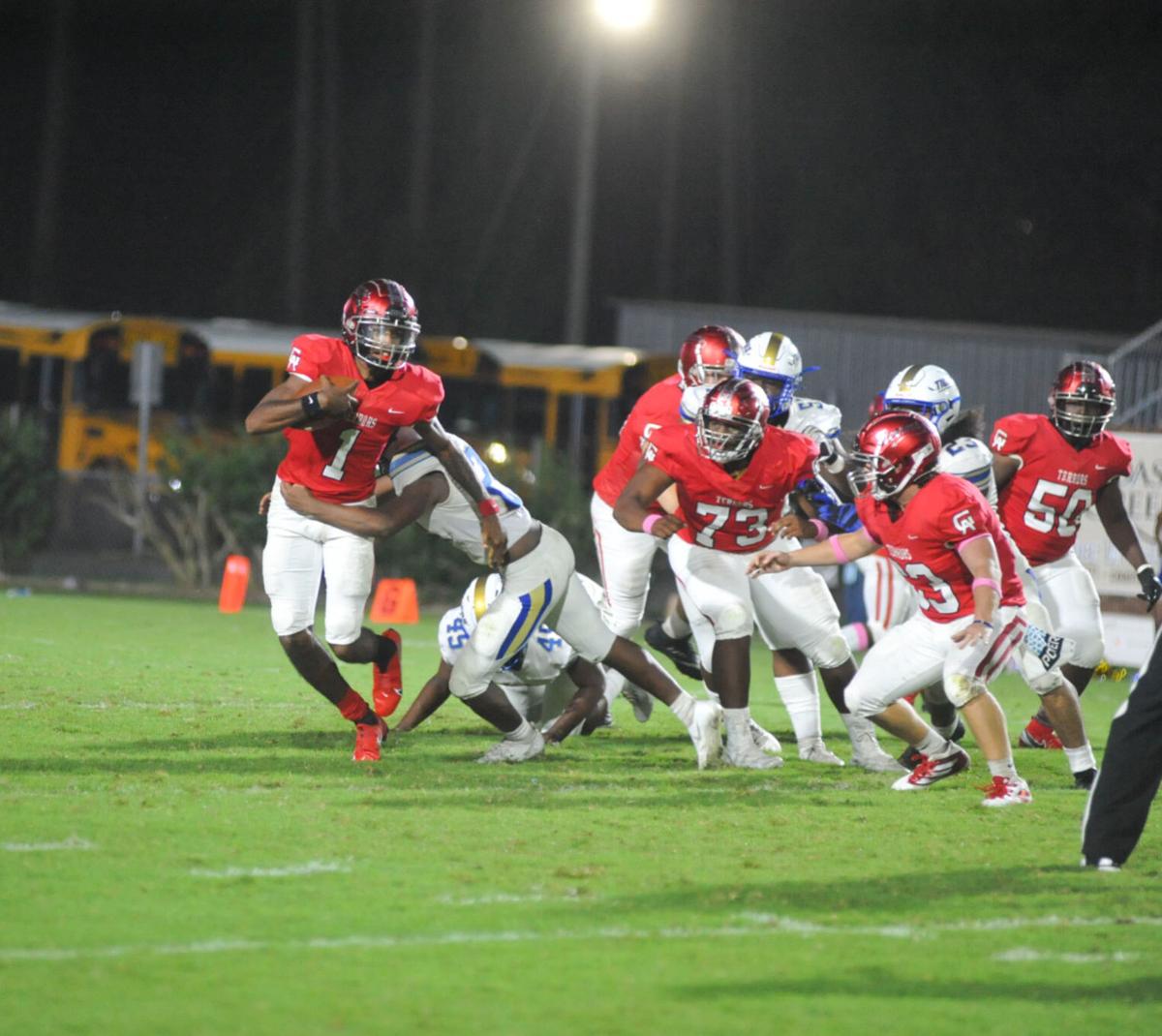 T.J. Lewis avoids a sack against Bradwell on Friday night. 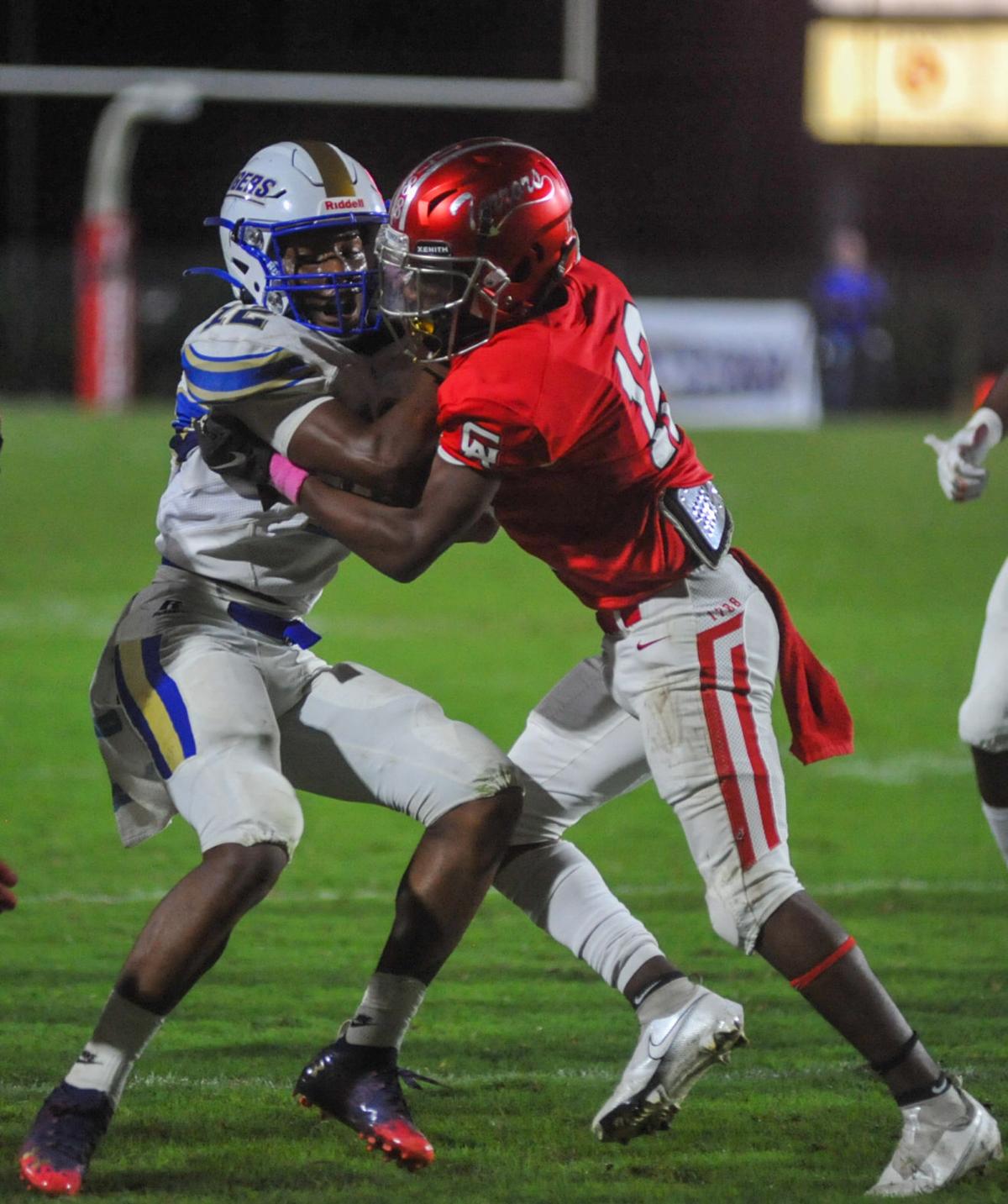 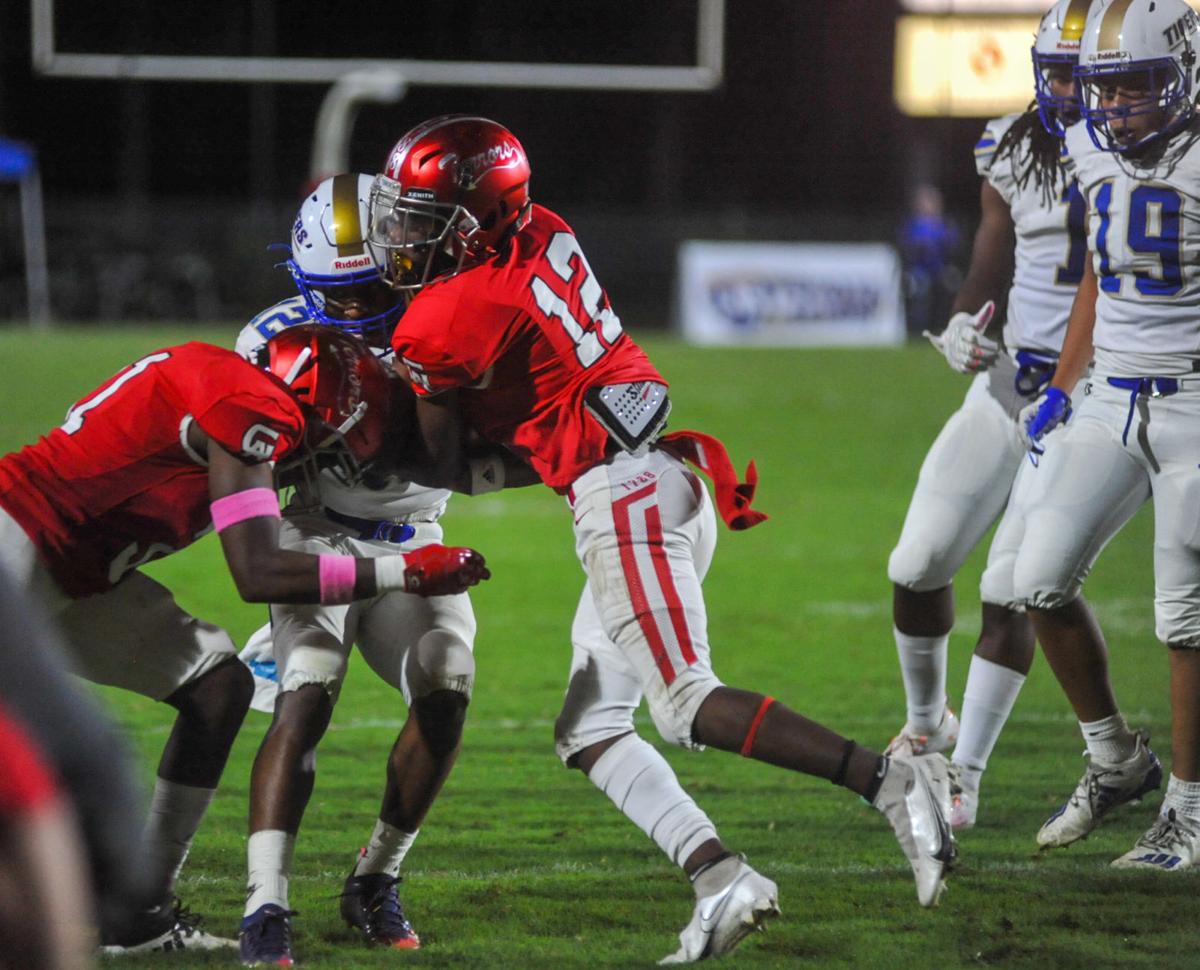 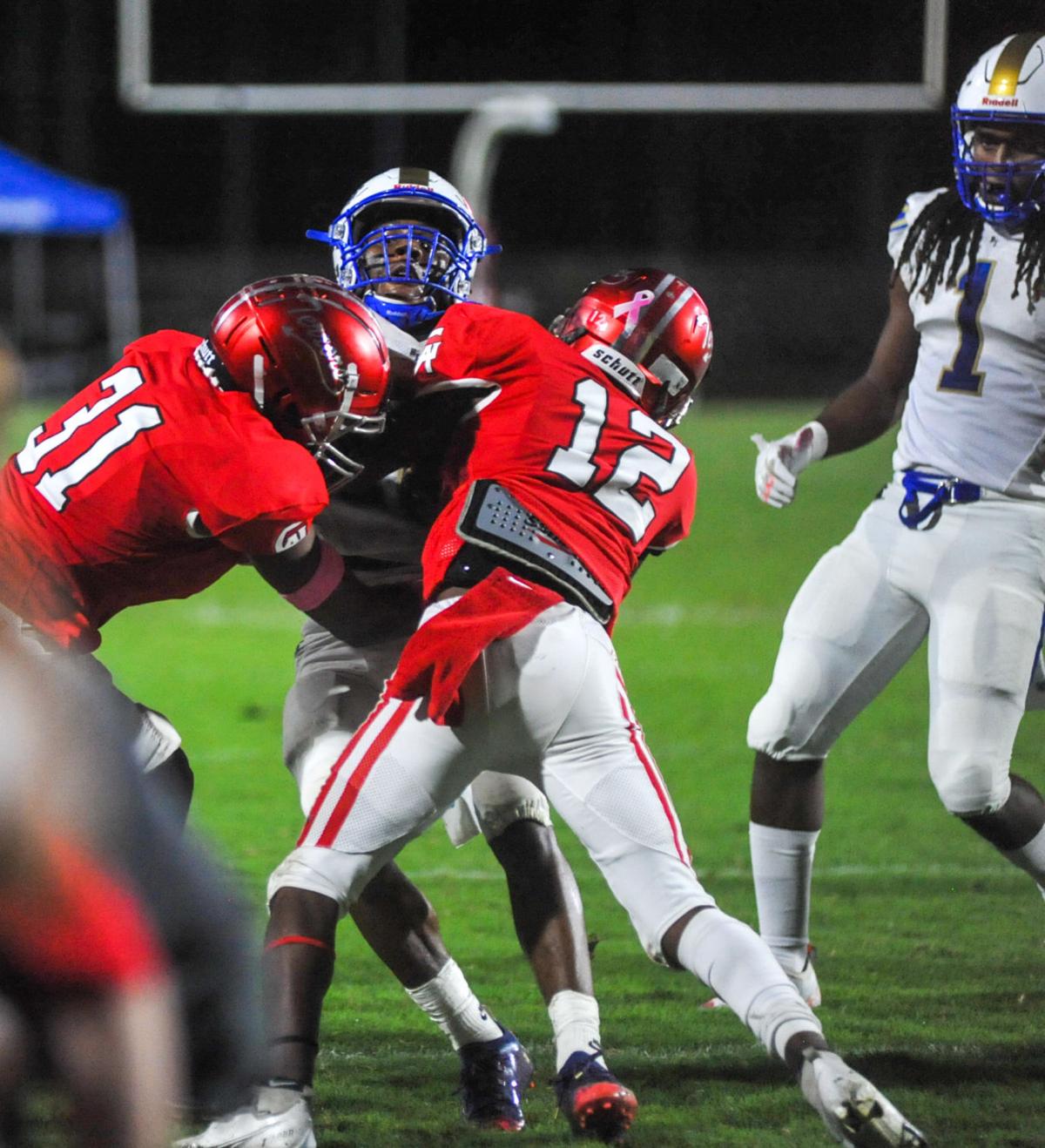 T.J. Lewis looks downfield as he runs the football against Bradwell Institute on Friday night.

Glynn Academy's defensive line gets ready for the snap.

D'Marion Hayes lines up on defense.

T.J. Lewis throws the ball during the Bradwell game on Friday night.

T.J. Lewis avoids a sack against Bradwell on Friday night.

Glynn Academy’s seniors led the way as the Red Terrors ran through Bradwell Institute 41-14 on Friday night between the bricks to get their first region win of the season.

The Red Terrors put together around 344 yards on the ground against the Tigers, with four guys rushing for at least 50 yards.

Coach Rocky Hidalgo said he felt like his team continues to improve.

“Hopefully, we'll continue to make improvements. Hopefully, we can add some things here over the next few weeks, and by the end of this year, we might be a pretty decent football team.”

Glynn Academy struck first on the night as the Terrors marched down the field and scored off a T.J. Lewis one-yard rush to make it 7-0 with 7:39 left in the first quarter.

After that score, the Terrors defense went to work and found ways to slow down Bradwell’s dynamic offense.

Lewis and company quickly scored on their next drive as he toted the rock 13 yards this time to make it 14-0 in the first quarter.

Lewis put on a show for senior night as he rushed 11 times for 110 yards and three touchdowns, averaging 10 yards a touch — doing most of his damage in the first half.

The Red Terrors defense hung tough against the Tigers and forced a long fourth down. However, Bradwell had a trick play up their sleeve, and it paid off. The Tigers scored their first points of the game off a fake punt to make it 14-7 in the opening quarter.

Senior running back Caden Hutchinson also made a statement against the Tigers. He had eight carries for 75 yards and two touchdowns, averaging 9.3 yards a carry.

He scored the third touchdown for Glynn as he bounced through the tackles for 33 yards into the end zone to make it 21-7 with 20 seconds to go in the opening quarter.

Hidalgo said these two seniors have to play well because they’re the leaders.

“They have to because we've got so many guys who haven't done a bunch of it,” Hidalgo said. “I told those guys last week, for us to win, they got to go out and excel — they have to be great. They got to make great decisions. They got to play to win the game. Those two guys are playing really good football right now.”

It wasn’t long until the offense got going again, and Lewis scored his final touchdown of the game with another 1-yard run to put the Red Terrors up 27-7 with 6:21 left in the half.

Glynn’s offense wasn’t quite done in the first half as they got the ball again with just a few minutes left before halftime.

Lewis threw a backward pass to D’Marion Hayes, who then launched it 48 yards to Ryan Seay — who stiffed armed the defender and ran it into the end zone. That score made it 34-7 at the half.

The Terrors defense continued to slow down the Tigers offense throughout the game, forcing a turnover on downs multiple times on Friday night.

Hidalgo said his defense did a good job despite having some guys banged up on defense.

“I think we played pretty well on defense considering we were sitting two inside linebackers who'd been banged up all week long, and basically four new secondary guys back there playing,” Hidalgo said. “We’ve made some improvements back there, but we're just trying to learn what we're doing.”

Glynn forced a running clock heading into the fourth quarter, and the Terrors offense found the end zone one more time. However, it was off an almost critical mistake. Lewis coughed up the ball after a 10 yard gain, but luckily Seay was there to pick it up and took off 72 yards, leaving the Terrors with 1st and goal from the one-yard line.

“Ryan Seay is a dude — he is a dude,” Hidalgo said. “People have no idea how good of a player he is. He is as good a player as I've had here in six years, and that's the truth. He's a hell of a football player.”

Hutchinson scored his second touchdown of the game on the next play with a 1-yard run to make it 41-7 with 8:11 remaining.

Bradwell had a lot of fight left in them and managed to score with just a couple of minutes left into the game to give the final score of 41-14.

Glynn Academy improves to 3-3 overall and 1-1 in the region. The Terrors hit the road next week for a showdown with the South Effingham Mustangs as they look to earn their second straight region win.