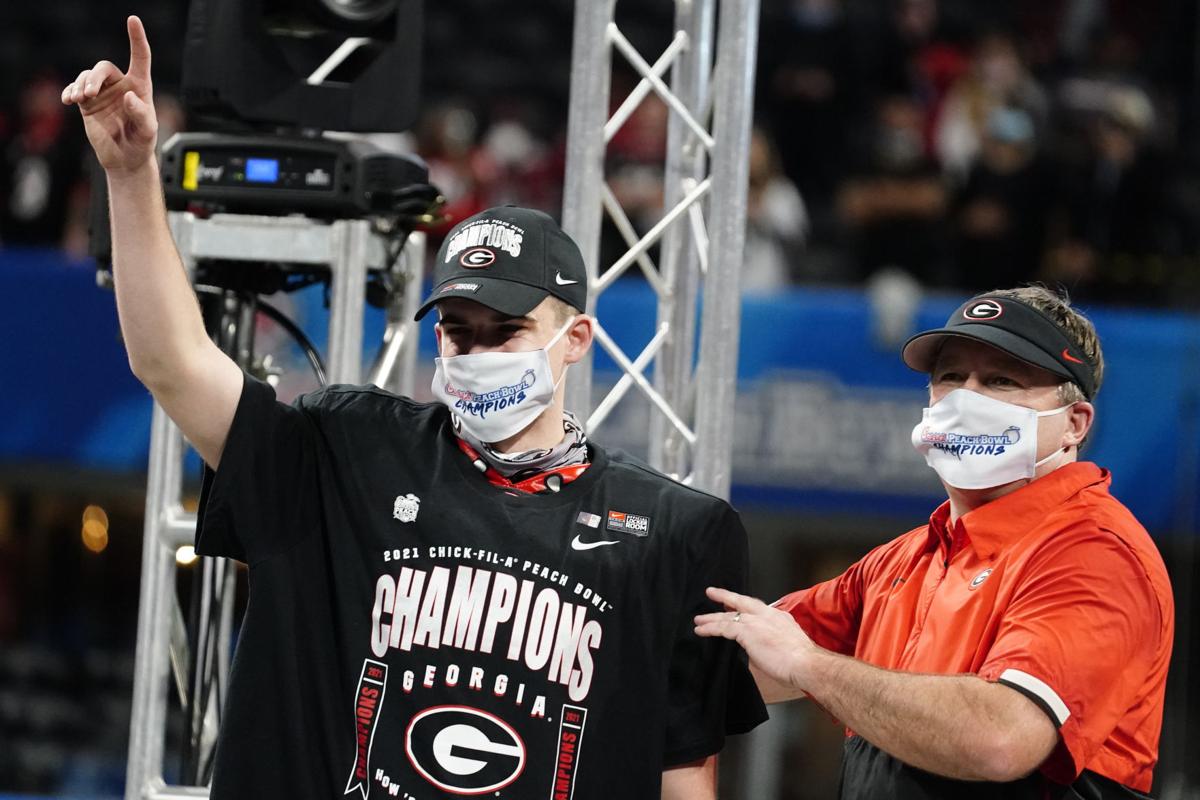 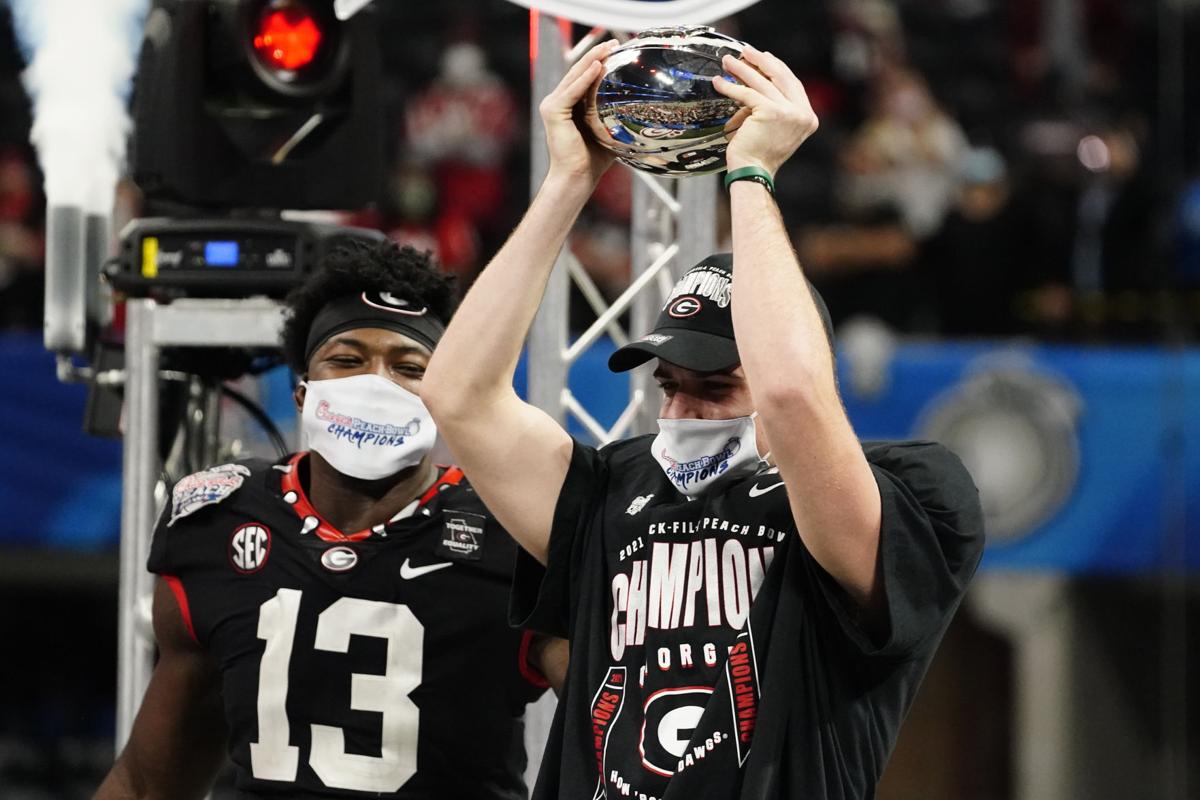 Georgia place kicker Jack Podlesny and offensive player of the game, holds the championship trophy after the Peach Bowl against Cincinnati, on Friday. 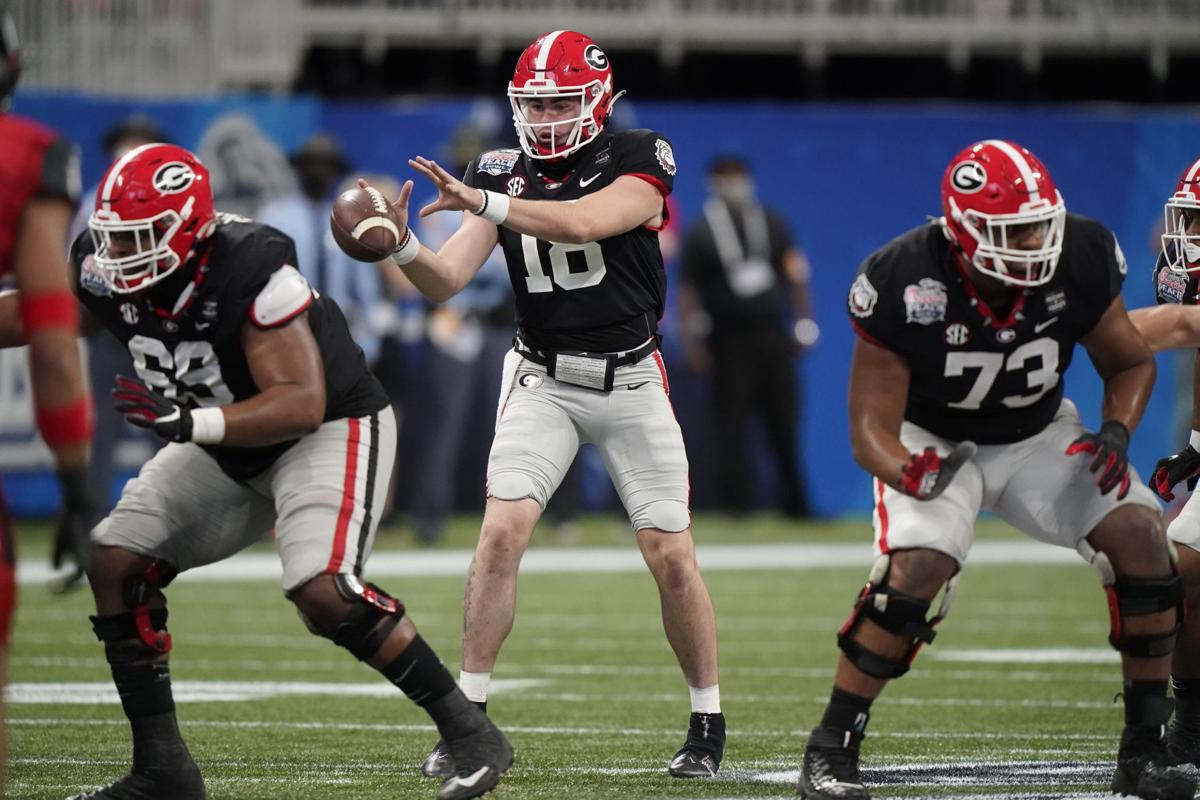 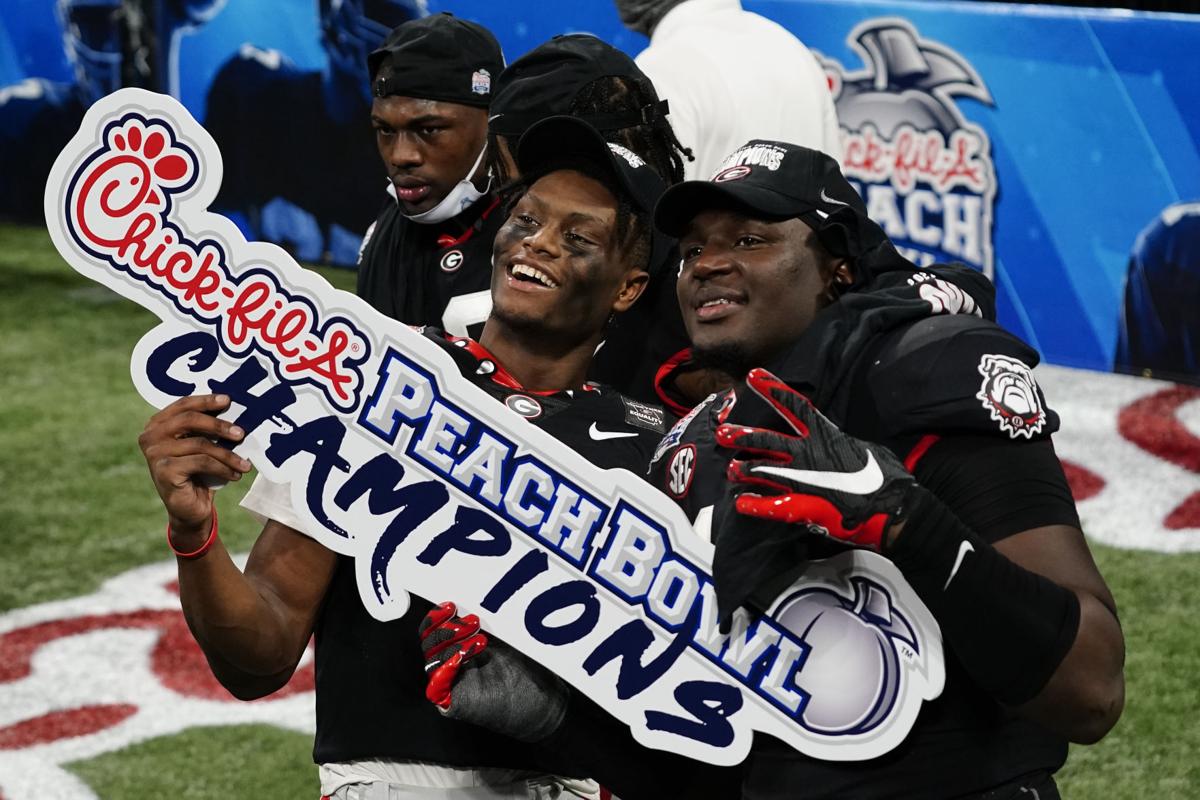 Georgia players celebrate their victory over Cincinnati after the Peach Bowl on Friday. 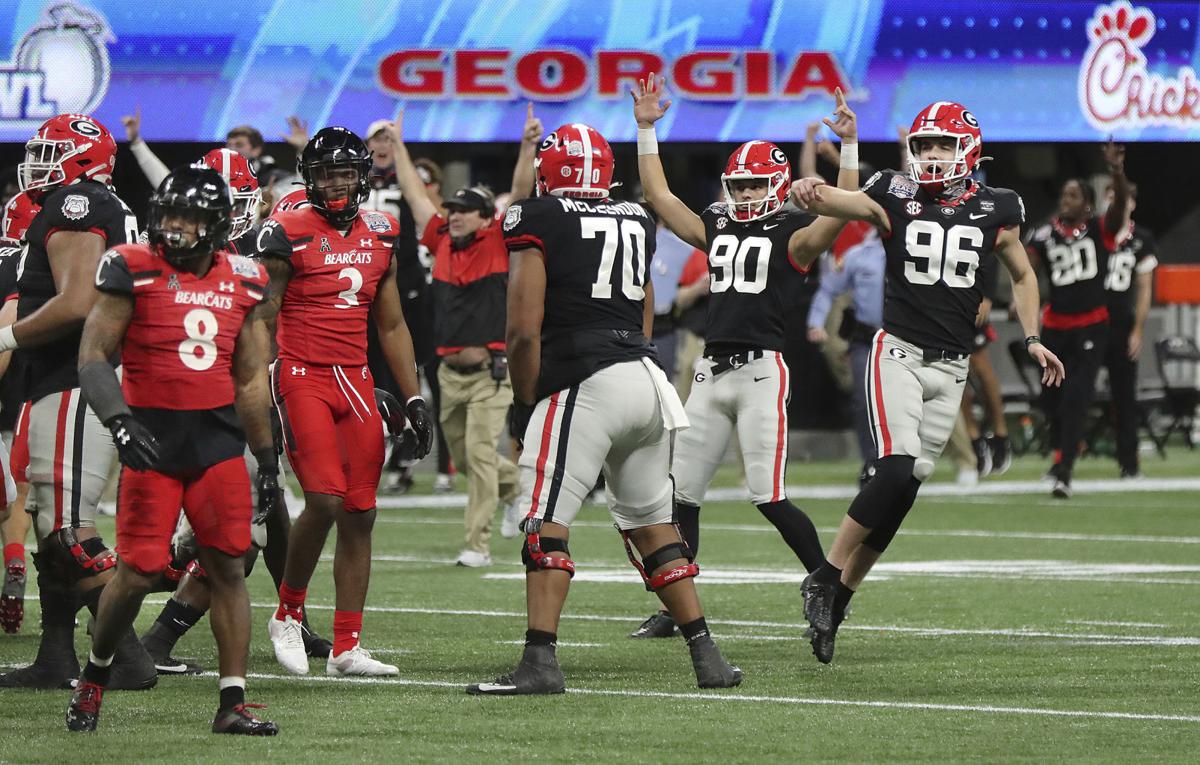 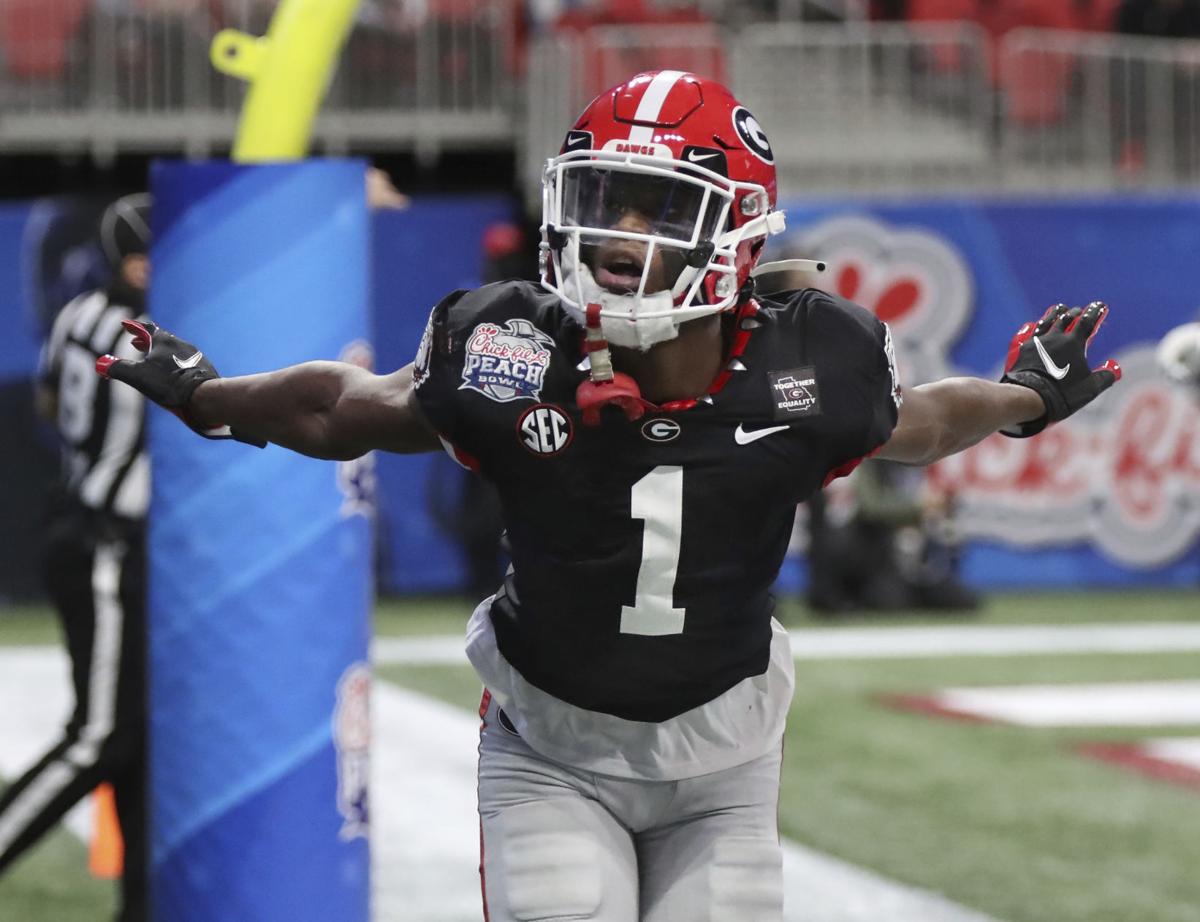 Georgia wide receiver George Pickens reacts to his touchdown against Cincinnati in the first half in the NCAA college football Peach Bowl game on Friday, Jan. 1, 2021, in Atlanta. (Curtis Compton/Atlanta Journal-Constitution via AP)

Georgia place kicker Jack Podlesny and offensive player of the game, holds the championship trophy after the Peach Bowl against Cincinnati, on Friday.

Georgia players celebrate their victory over Cincinnati after the Peach Bowl on Friday.

Georgia wide receiver George Pickens reacts to his touchdown against Cincinnati in the first half in the NCAA college football Peach Bowl game on Friday, Jan. 1, 2021, in Atlanta. (Curtis Compton/Atlanta Journal-Constitution via AP)

It’s not every day that a kicker has the guts, with three seconds on the clock, to bomb a 53-yard field goal to win the Peach Bowl over Cincinnati 24-21, but “Hot Pod” did.

He has ice in his veins and executed that kick perfectly. The last time Georgia depended on their kicker to win the game was when Rodrigo Blankenship made a 25-yarder against Kentucky in 2016.

That game elevated Hot Rod to instant celebrity status, and now Podlesny did the same with his peachy 53-yarder. For the game-winner, Podlesny was named the Peach Bowl Offensive Player of the Game.

His field goal was the longest game-winner since Kevin Butler’s 60-yarder against Clemson in 1984.

“Hot Pod” should now forever be his name because he didn’t let the moment get to him, and he showed the entire college football world he’s a name they should know.

Podlesny is making his hometown and his fellow Red Terror brethren. After he made the kick, multiple teammates and current Terrors congratulated him for a job well done. Even Terrors coach Rocky Hidalgo tweeted him.

His kicking coach, Kip Hall, praised and praised him on social media. Hall should be immensely proud of his guy — I know I am.

Even though he earned the starting job all season, “Hot Pod” secured the bag and should 100 percent keep his job. Shoot, he should be given a scholarship after that bomb of a kick.

“I felt comfortable with where he was that he would have the leg strength to get there,” said Georgia head coach Kirby Smart. “That’s about the spot that we work on it every week during two minute, that I say, ‘Hey, if we get to that spot, we’re going to be able to make the field goal.’”

Smart said he doesn’t mess with the kickers in any way, especially on game day. He said this kick was something they go through weekly, and it’s a good thing time in their favor.

“Probably the best thing that happened is he didn’t have long to think about it,” Smart said. “They were out of timeouts. It was important that we get out there and get set. You can get a delay of game in the heat of the moment. Get out there, snap it. They can’t organize a rush. We do it every week. He drilled it.”

Smart made a decision that seemed risky at the time to punt instead of going for it on fourth down, but it paid off in the long run. Podlesny said he had faith the defense would get the job done and knew his offense would get him in the right position to make it.

“I told coach before the game, I was good inside 55, 54 yards,” Podlesny said. “Our offense drove. Once we kind of got there, I tried to slow my breathing because I didn’t want to rush anything. I didn’t want to overcompensate for anything. Snap from Payne Walker and hold from Jake, unbelievable. I tried to follow through with the kick, and it went in.”

That was Podlesny’s first-ever game-winning field goal. He didn’t have one at Glynn Academy, but when he got his number called, he didn’t let his team down. While it’s pretty evident that his teammates like him, I think the brotherhood is now forever there for this group of guys.

“I mean, just the endless support from everyone coming up, giving me hugs, high fives, everything,” Podlesny said. “But one thing I think just standing out the most was people coming up and telling me the glory goes to God, that God had my back there.”

It wasn’t just “Hot Pod” that performed well and helped get the win — Azeez Ojulari also outdid himself, leaving it all on the field.

Ojulari was the Peach Bowl’s Defensive Player of the Game, and rightfully so as he got the sack in the end zone with two seconds on the clock for a safety and to end the game.

He finished with four tackles, three sacks and two forced fumbles. Ojulari left it all on the field for his team.

This win was a big one for Georgia. Even without 12 guys that played a good bit, the Bulldogs persevered and got the win. They came out of the half and showed everyone they flat out wanted it more than Cincinnati.

Eight sacks for the defense and 12 tackles for loss — now that’s what I like. J.T. Daniels went 26-of-38 for 392 yards, one touchdown and one interception. Georgia’s running game lacked against the Bearcats, but Daniels and his wideouts were able to really make enough happen to let “Hot Pod” kick his two field goals.

The Bearcats deserve some credit because they played hard and gave Georgia everything they had. I honestly thought it would be another one of those years the Bulldogs didn’t give enough effort and finish the year short.

After what 2020 did to all of us, it was pretty evident that Georgia wasn’t about to let Cincinnati get the best of them. Daniels stepped up when it mattered. George Pickens did what he needed to do. Zamir White, Kenny McIntosh and Kendall Milton did their jobs. The offensive line found a way to protect Daniels just long enough — it was a group effort, but that entire team needs a pat on the back.

They even honored their fellow teammate James Cook, who’s dad suddenly died this week, with running back coach Dell McGee wearing his jersey. There’s just something different about this Georgia football team.

I’ve seen so many groups just hang their head and accept whatever is happening — not Georgia. The young guys accepted the challenge and did their best. The older guys who chose to play stepped up in big ways and led the team one final time to ensure their spot in Bulldog history.

This senior class is tied for having the most wins in Georgia history as they’re 44-9 overall. I hope that despite this season not going how they wanted, they’ll be proud to finish it and get the win in Atlanta, at least the Bulldogs did outside their SEC East foe.