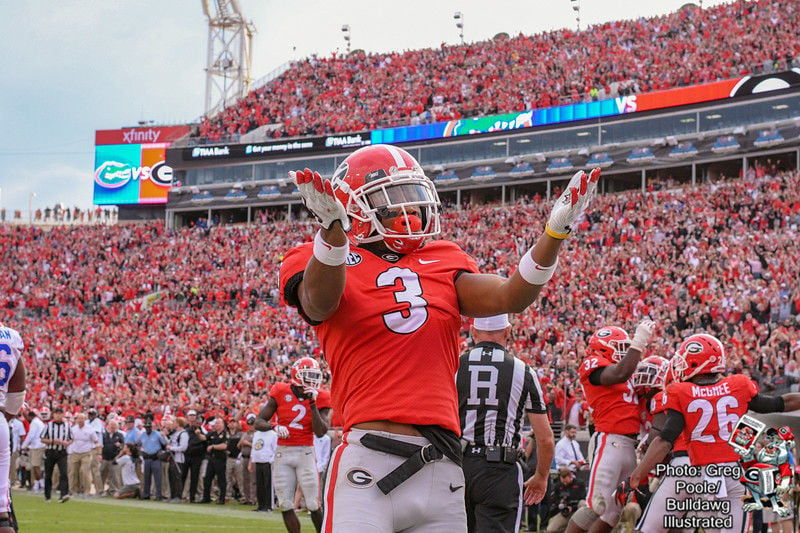 Tyson Campbell flashes his hands to the crowd during the Georgia-Florida game on Oct. 27, 2018. 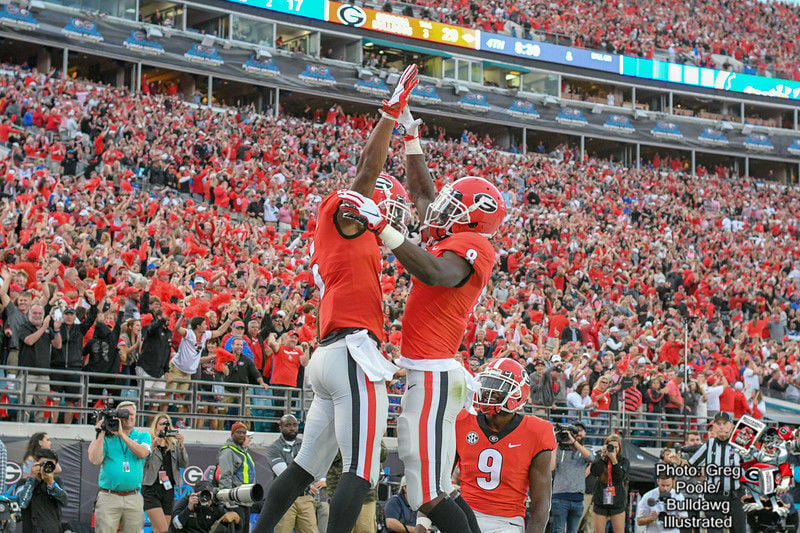 Terry Godwin, left, and Riley Ridley, right, celebrate after a touchdown during the Georgia-Florida game on Oct. 27,2018. 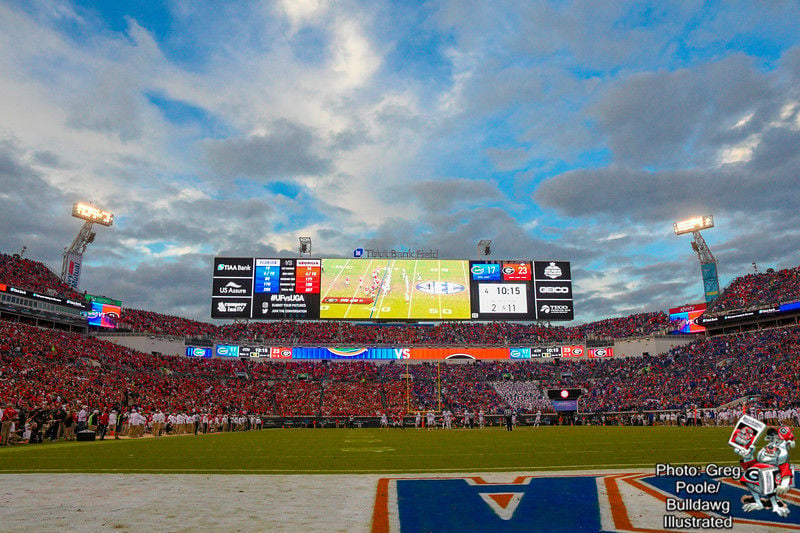 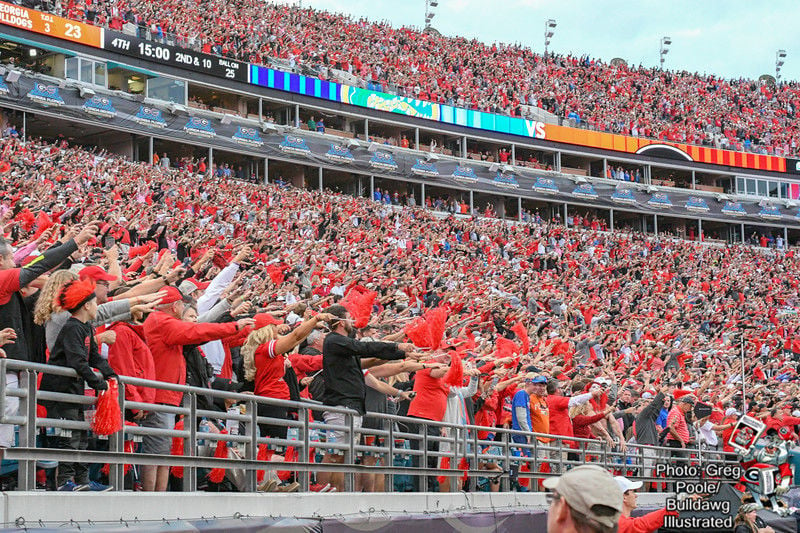 The Georgia side of TIAA Bank Field in Jacksonville, Fla., during the Georgia-Florida game on Oct. 27,2018. 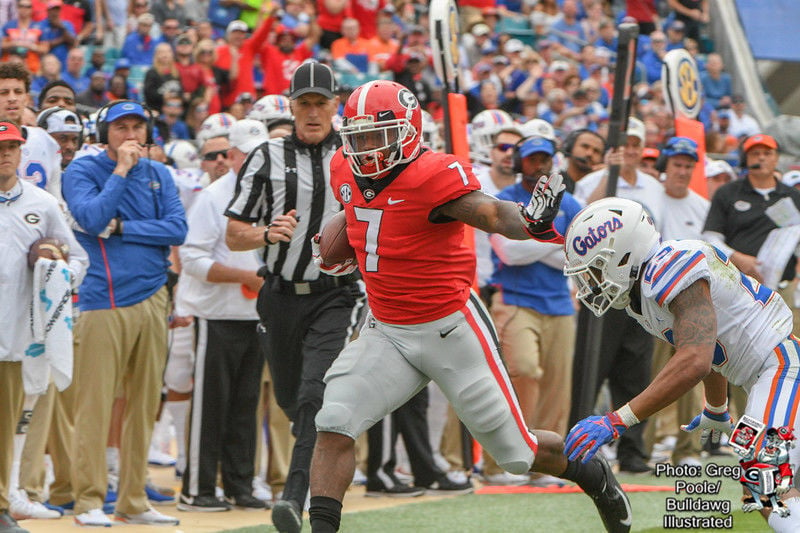 Georgia’s D’Andre Swift stiff arms a Florida defender during the 2018 iteration of the rivalry game played in Jacksonville.

Tyson Campbell flashes his hands to the crowd during the Georgia-Florida game on Oct. 27, 2018.

Terry Godwin, left, and Riley Ridley, right, celebrate after a touchdown during the Georgia-Florida game on Oct. 27,2018.

The Georgia side of TIAA Bank Field in Jacksonville, Fla., during the Georgia-Florida game on Oct. 27,2018.

Georgia’s D’Andre Swift stiff arms a Florida defender during the 2018 iteration of the rivalry game played in Jacksonville.

When I think of the Georgia-Florida game, one of the first things that come to mind is Larry Munson’s famous ‘Lindsay Scott’ call from the Bulldogs’ 26-21 win in 1980 when Munson breaks his steel chair with a five-inch cushion, and he cannot believe the Bulldogs won and stayed undefeated.

The call highlights one of the greatest traditions in many Bulldog homes of going to St. Simons and Jekyll Island for the Georgia-Florida week.

“Do you know what is gonna happen here tonight? And up at St. Simons and Jekyll Island and all those places where all those Dawg people have got those condominiums for four days,” Munson said. “Man, is there gonna be some property destroyed tonight.”

This call gives me chills every time I read it or listen to it, and I expect it does the same to thousands of people across the Golden Isles.

However, some people want to move the game out of Jacksonville.

I moved to Brunswick in April to become the sports reporter for The News. After my interview, I sat down with a friend who is a local, and he told me to get ready for the Georgia-Florida weekend because it turns into a madhouse.

After he told me that, I became even more excited about the Georgia-Florida week because out of all the great traditions the Bulldogs have, that week is one of the best ones, ever.

St. Simons and Jekyll Island are two places that I’ve heard of all my life, and the one thing I associated with them was the Georgia- Florida game. The Georgia coast brings along as much tradition with the game as the game does itself.

The Golden Isles is a perfect place for people to camp out for this weekend.

It has the beach, great food, tons of golf courses and is only 45 minutes from Jacksonville.

Fans can take a mini vacation at the end of October and get the beach and football all in the same week. I know that is something I will love the most about living here.

The University of Georgia even schedules its fall break around this game so students can come down and enjoy the festivities, especially with ‘Frat Beach’ being a hot spot for students.

While I haven’t personally spent a Georgia-Florida week in the Golden Isles, I know how important that week is to the locals.

This game has been played in Jacksonville every year since 1933, except when it was played in Gainesville and Athens in 1994 and 1995 because of renovations to the Jacksonville stadium.

So for 83 years, people have traveled to Jacksonville to see the game, and I can bet that many people stayed in St. Simons or Jekyll Island during those 83 years as well.

While this rivalry matchup has a contract to stay at the TIAA Bank Field in Jacksonville through 2021, the future of the game staying there is up in the air, for now at least.

The debate of whether to keep it or move it resurfaced after Georgia’s head coach Kirby Smart made an interesting comment on the SEC Network.

“Nothing has been decided,” Smart said. “There’s no decision being made. It’s just something that we’re all thinking about.”

The first thing that comes to mind after that statement is the fact that Smart doesn’t defend the game and flat out says he wants to keep things how they are.

First off, the Mercedes Benz Stadium in Atlanta has plenty of games already played in it. The stadium has the Chick-fil-A Kick Off game, the SEC Championship, and the Peach Bowl played in it every year. Why add one more game in that stadium? By adding this game to Atlanta’s schedule, it makes it just another game played in the Benz.

The game would not have the same feeling as it would in Jacksonville.

As for the home-and-home vote, playing in Athens and Gainesville seems like a reasonable plan, but at the same time, it takes away from the atmosphere the game has in Jacksonville.

I don’t think you’ll find a half red, half orange stadium if the game was at either home stadium. People would see mostly blue and orange in Gainesville and red and black in Athens.

One of the coolest things about the game now is the fact that fans are split down the middle with half of the stadium in red and the other in orange.

I understand that some people cannot make the trip to Jacksonville because it can be expensive. At the same time, though, why take away a tradition for thousands of fans?

The home-and-home version would give each team another recruiting weekend, which is one of the things Smart talked about in the same interview on television.

Sorry coach, but that is a lame excuse to want to move the game. For one, since Smart took over the Bulldogs have had on 247Sports Composite team rankings the No. 6, No. 3, No. 1, and No. 2 recruiting classes.

I don’t think that adding one more weekend of recruiting could help the Bulldogs that much more. Georgia seems to be doing just fine with the game in Jacksonville.

The only thing the two schools can’t do recruiting wise that weekend is entertaining the prospects, they can, however, provide a complimentary ticket to the game.

So how would this weekend affect recruiting if prospects can go to the game? I don’t believe it can.

The Georgia-Florida game is like no other in college football. What other game is in the 3:30 p.m. CBS slot every year. Georgia fans don’t know the exact kickoff times for most of the games until 14 or so days out, but they know when to pencil in this game.

For 85 years, these two teams have met in Jacksonville producing some epic memories. I bet there are just as many memories for the Golden Isles locals.

College football is already losing so many of its rich traditions. However, the Georgia-Florida game doesn’t need to be a casualty of the changing times. Instead, it should be honored and preserved.