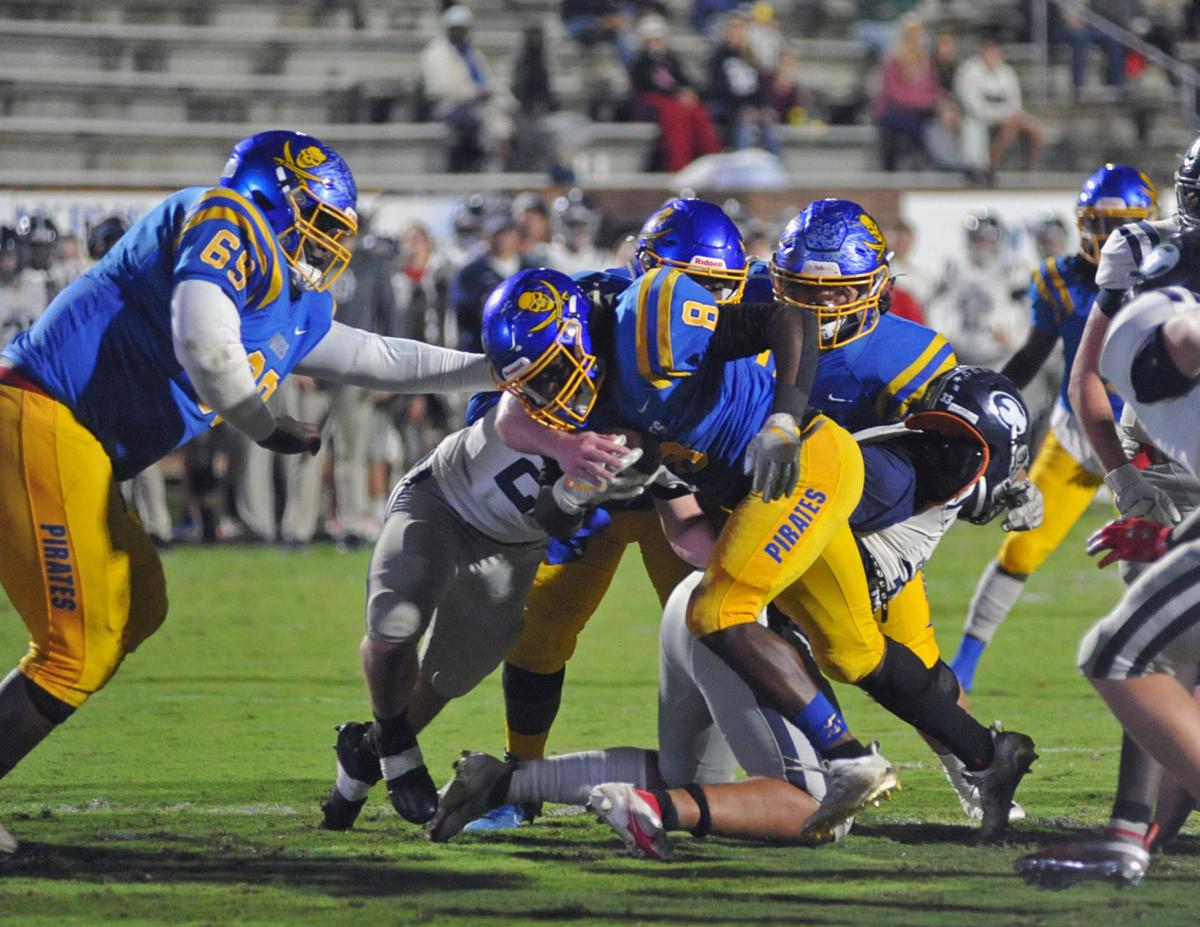 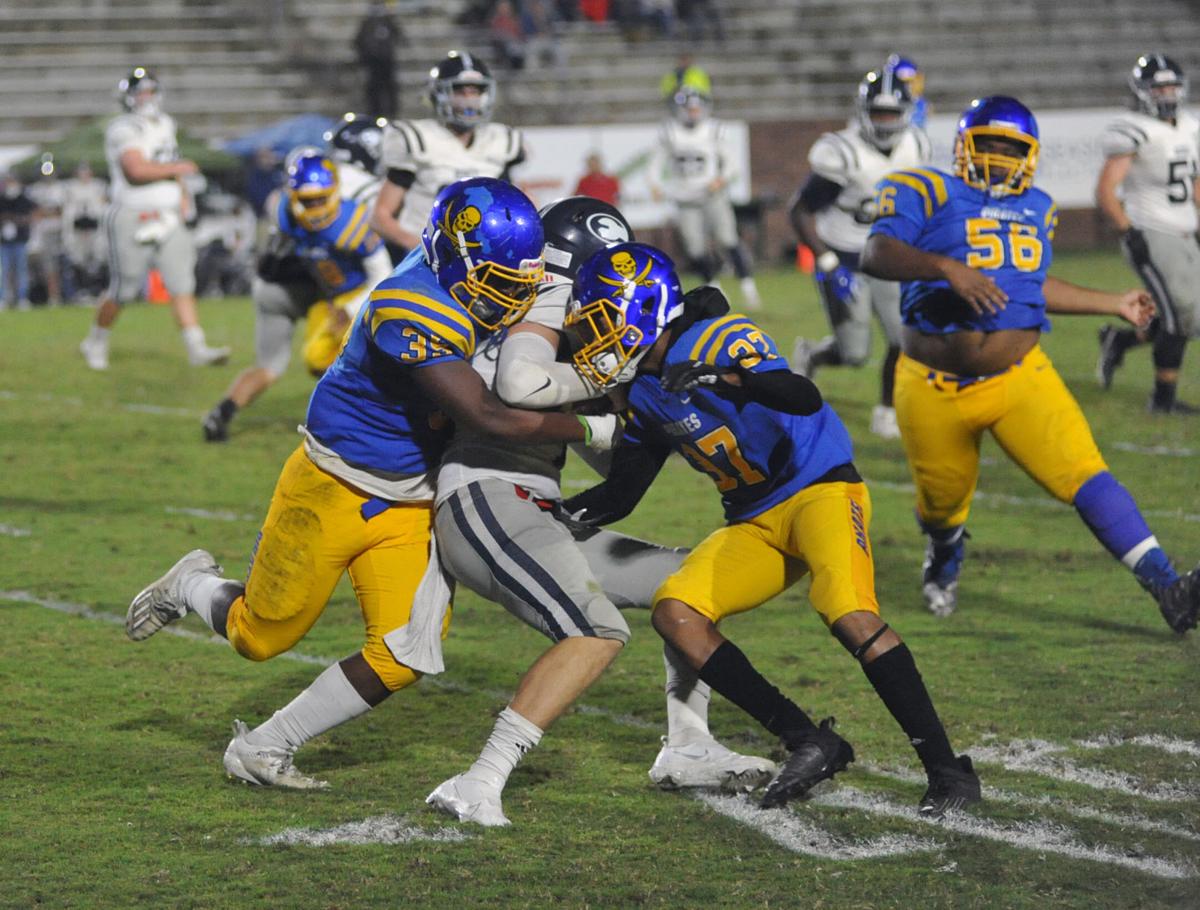 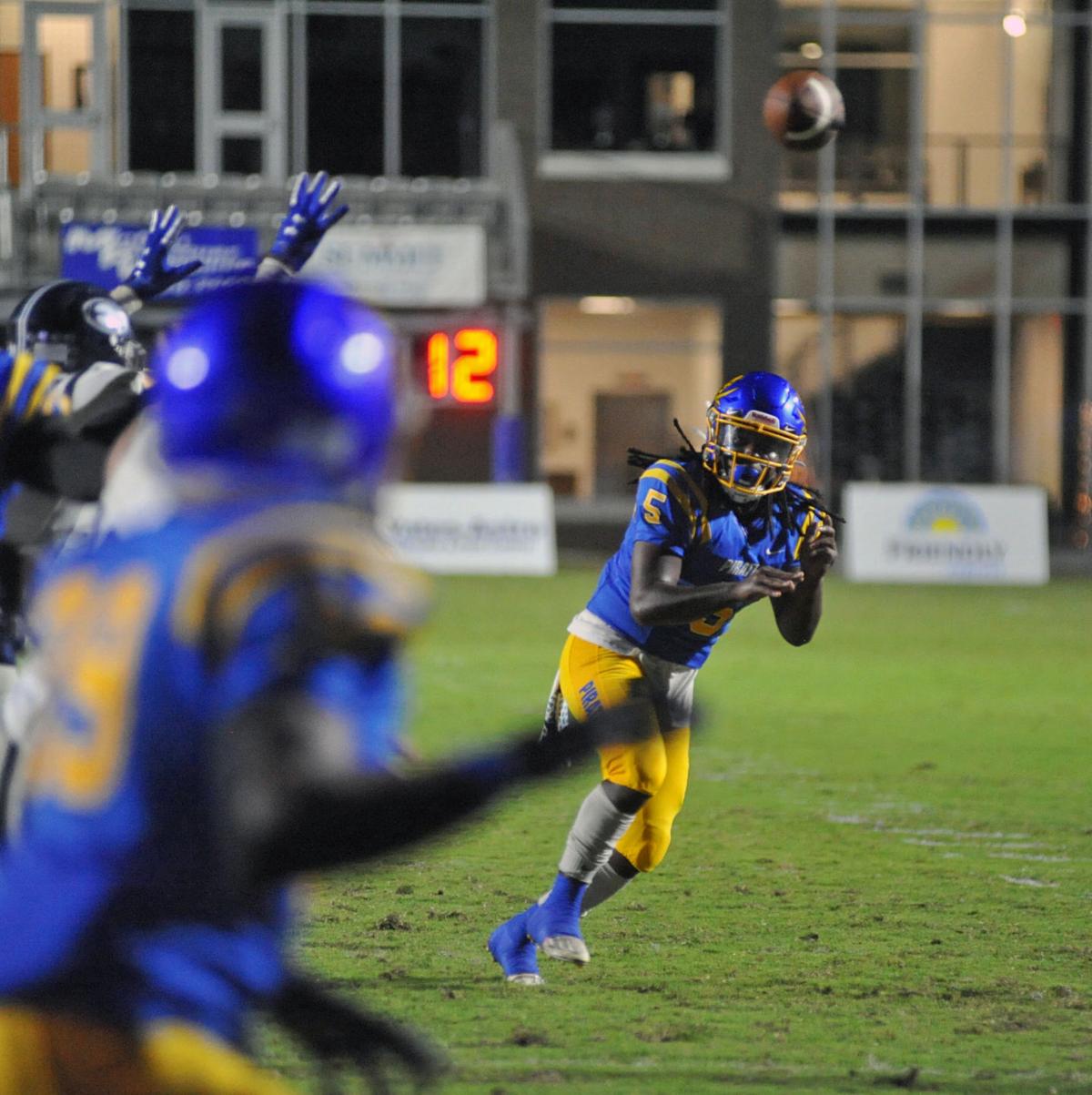 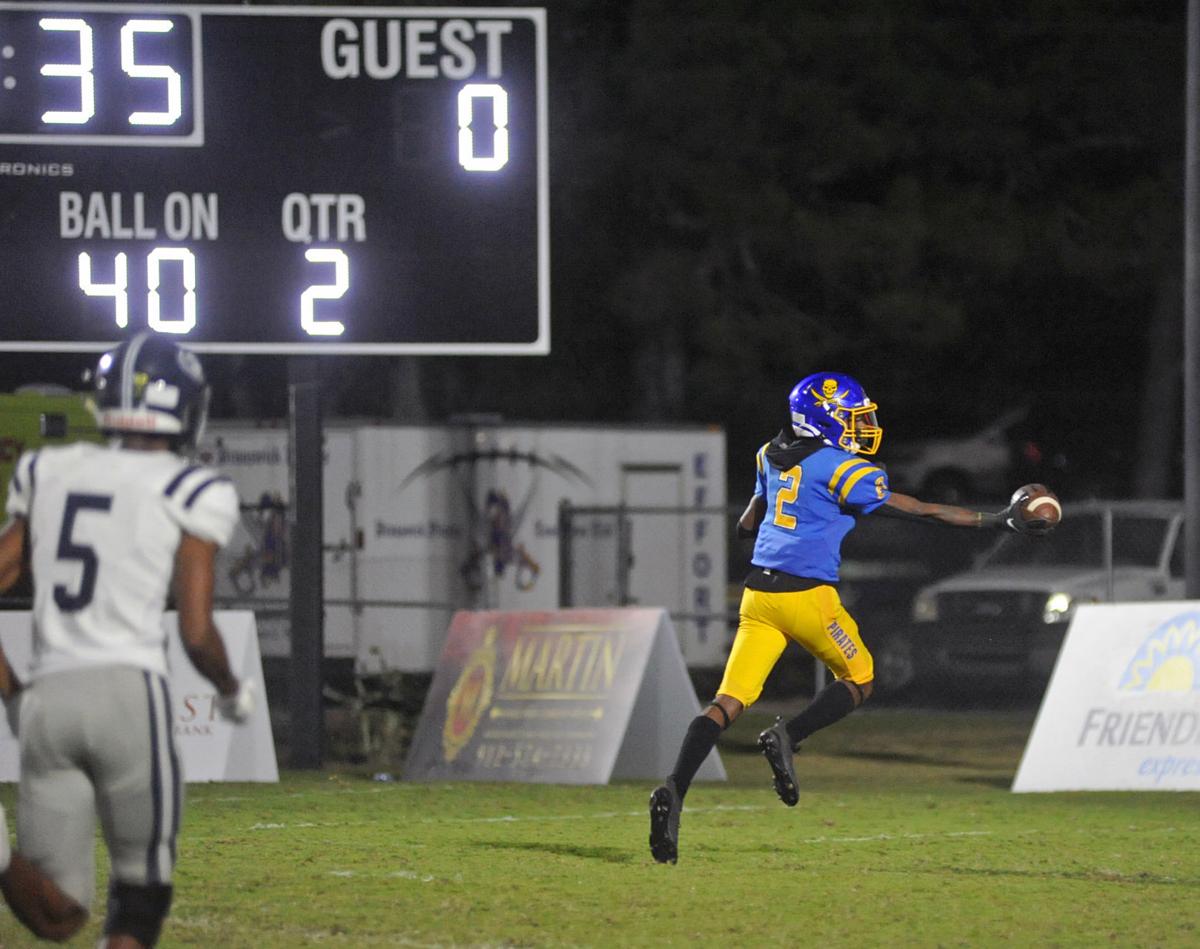 Khamori Simmons crossed the 1,000-yard mark on the season, Tyrease Jones hauled in his 12th scoring reception, and Brunswick High shutout Effingham County 49-0 on Friday at Glynn County Stadium to secure a share of the Region 2-6A championship.

All week, the Pirates (7-3, 5-1) stressed the importance of finishing the job in the regular season against the Rebels (3-7, 2-4), and they took that message to heart, earning their biggest win of the year.

“It’s a great run,” said Brunswick head coach Sean Pender. “We had the one stumble at Richmond Hill, but besides that, our guys are playing really good football, and the type of football you want to play going into the playoffs.

“Unfortunately, it looks like we’ll be going on the road, but fortunately, we got a share of the region title — we just drew the short straw.”

Effingham County actually found itself in scoring position just minutes into the game when it recovered a pooch kick and completed a 15-yard pass on its first play from scrimmage to quickly move down inside the red zone.

But Brunswick forced and recovered a fumble on a 4th and goal from the 10 and proceeded to march 88 yards in nine plays to go up 7-0 on Chuckobe Hill’s 1-yard touchdown run and it never looked back.

Hill also caught a 44-yard pass on the drive and he finished with 113 total yards and a score in a big night for the “Wolfpack” running back group. Leon Charlton scored three touchdowns — two by land, one through the air — and Khamori Simmons punctuated his regular season with a 129-yard effort against Effingham County.

Simmons rushed for 111 yards in the first half alone as Brunswick raced out to a 28-point advantage. It was the fifth time he’s gone over the century mark in a game this season.

In total, the Pirates ran up 268 yards on the ground, and added another 160 via the pass with a bulk of the yardage coming on the arm of quarterback KJ Lee, who completed 6-of-7 passes for 113 yards and two scores.

Lee connected with fellow senior Tyrease Jones for a 40-yard touchdown pass on Brunswick’s second play of the second quarter to go up three scores. Jones finishes the regular season as the Class 6A leader in touchdown receptions, having reached paydirt at least once in every game but one.

If the first half was an offensive showcase, the second half was when the Pirates’ “Black Swarm” defense flexed its muscle.

Protecting a four-touchdown lead, Brunswick started the third quarter with a bang when Derek Smith jumped a quick screen and took it 34 yards for a pick-six as an omen of the Pirates’ defensive dominance to come in the half.

Brunswick held Effingham to just 40 yards in the second half and held onto the goose egg on the scoreboard for the first time in two seasons under defensive coordinator Thomas Tedder.

“We had a couple of games where we had the opportunities to have shutouts and we just couldn’t get it,” Pender said. “For us to get it this time, (Tedder)’s got that monkey off his back. He was excited about that.”

Ultimately, a tiebreaker will send Brunswick to Covington next week to play a 2-6 Alcovy team from Region 3-6A.

But with all the hardships 2020 has sent the Pirates’ way, a couple of road trips is nothing the program can’t handle.

“I’m very proud of our team,” Pender said. “I’m very proud of our coaching staff. We’ve really worked hard this year; our kids have overcome a lot of adversity with all the different things we’ve talked about, like the Ahmaud shooting and how it affected our program, the things that we did because of it. This is a very special group.

“Of course, the pandemic stuff, not knowing if we’d have a game or not. Being able to complete the regular season, what an awesome feat that was. I’m very, very proud of this 2020 team.”