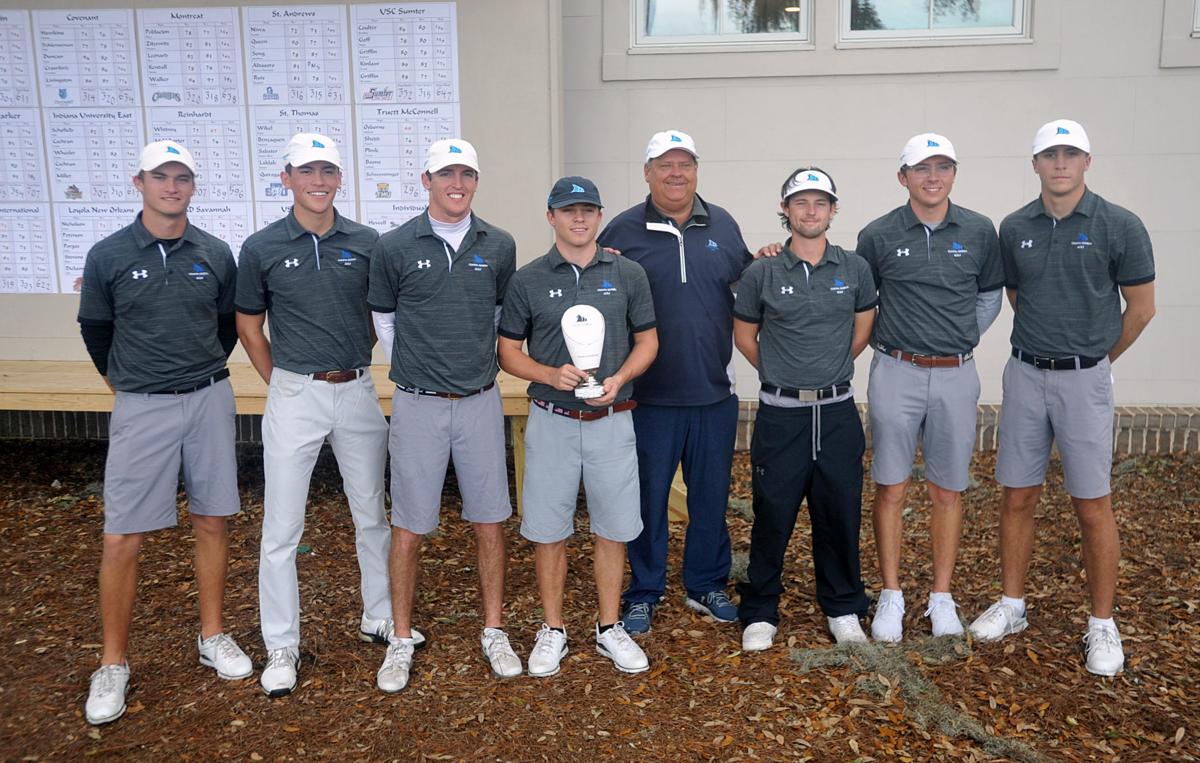 The Coastal Georgia men’s golf team poses for a photo after winning its Winter Invitational on Tuesday at the Brunswick Country Club. 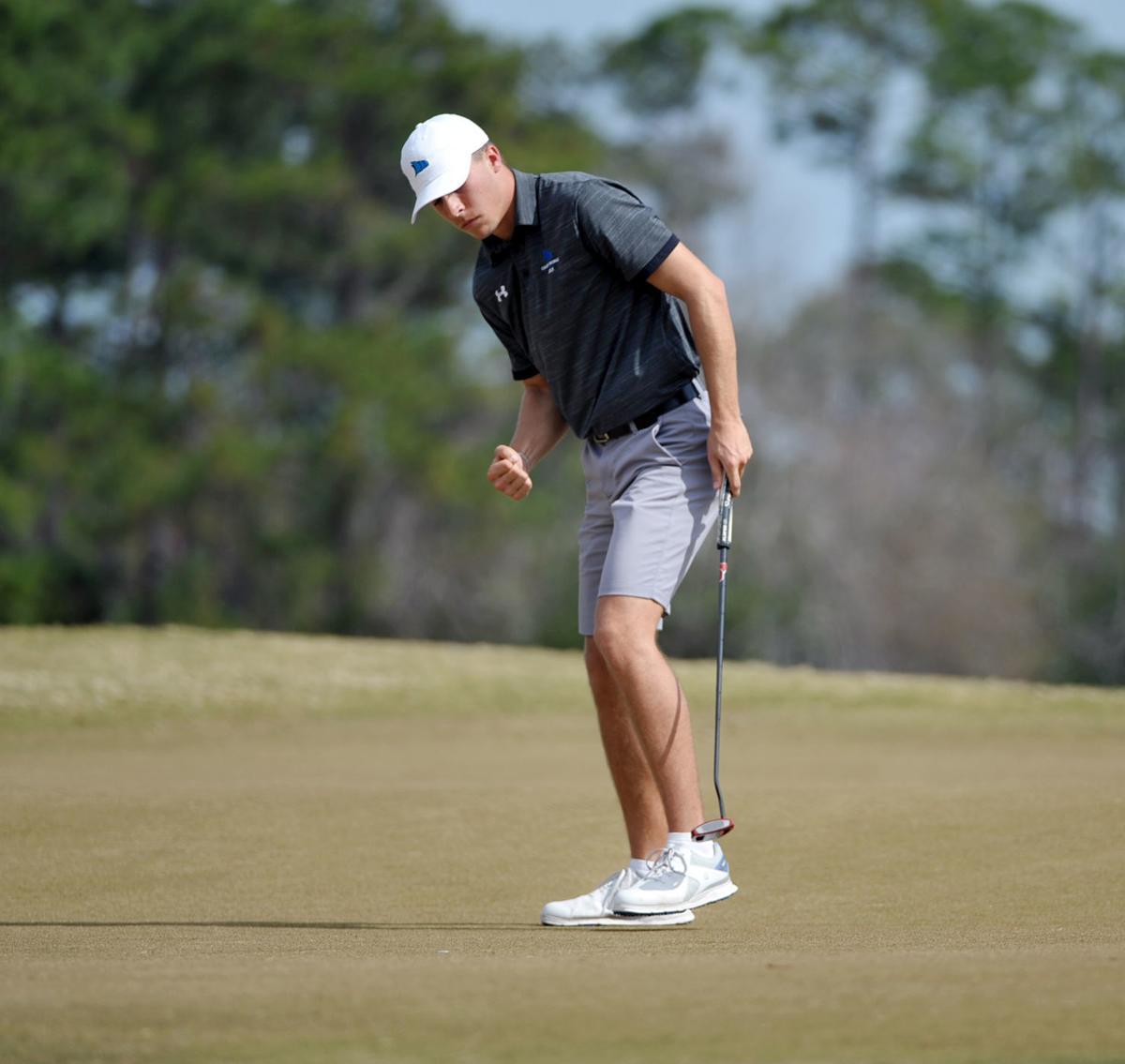 Coastal Georgia Eli Scott pumps his fist after sinking a putt on hole 18 at Brunswick Country Club on Tuesday at the Mariners’ Winter Invitational. 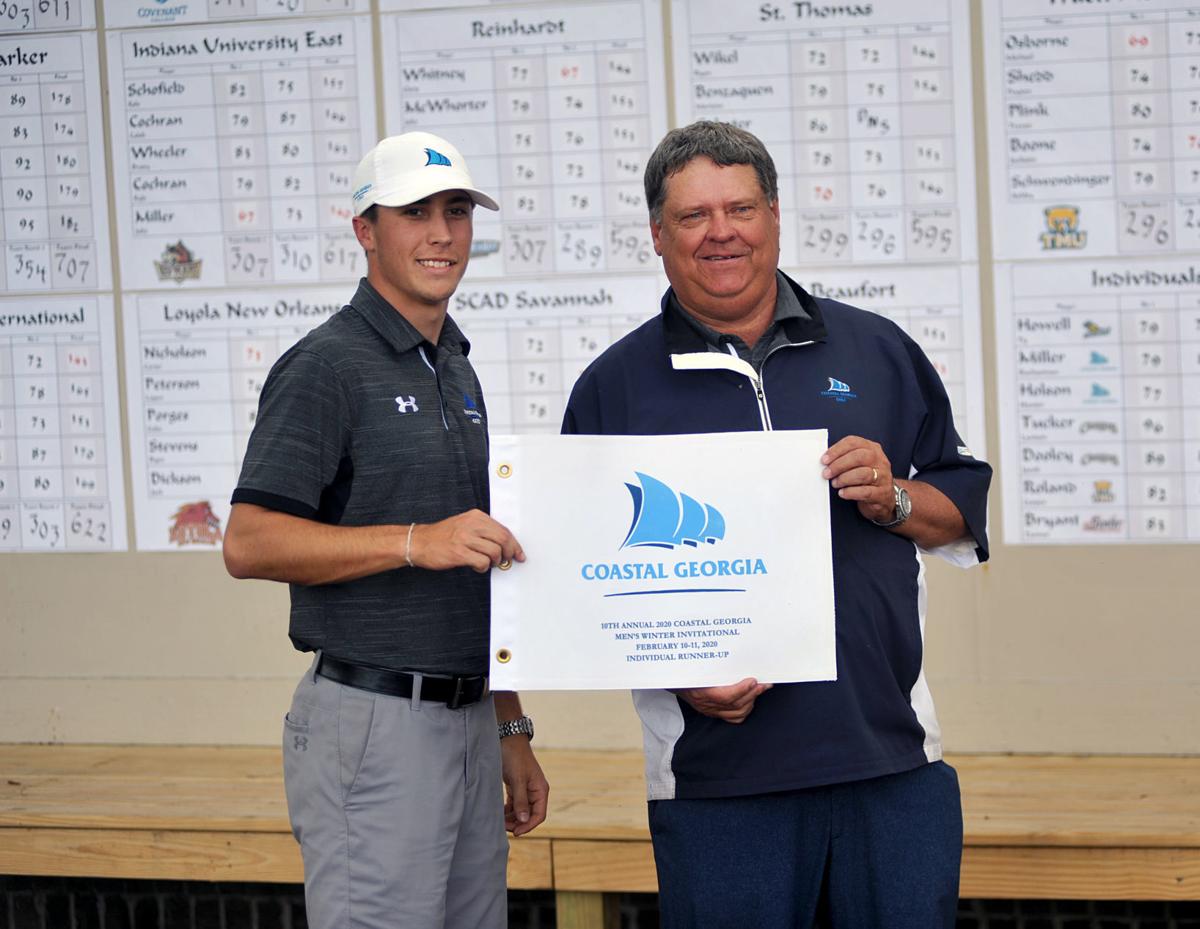 Coastal Georgia’s Eli Scott poses for a photo with men’s head coach Mike Cook after finishing second at the Mariners’ Winter Invitational on Tuesday at the Brunswick Country Club.

The Coastal Georgia men’s golf team poses for a photo after winning its Winter Invitational on Tuesday at the Brunswick Country Club.

Coastal Georgia Eli Scott pumps his fist after sinking a putt on hole 18 at Brunswick Country Club on Tuesday at the Mariners’ Winter Invitational.

Coastal Georgia’s Eli Scott poses for a photo with men’s head coach Mike Cook after finishing second at the Mariners’ Winter Invitational on Tuesday at the Brunswick Country Club.

Eli Scott dropped his approach shot about six feet from the pin on the 18th hole Tuesday at Brunswick Country Club and passionately pumped his fist after sinking the birdie putt.

The Coastal Georgia sophomore ultimately finished two strokes back of USC Beaufort’s Dawson Peterson for the individual title, but another strong outing by Scott helped the Mariner men win their Winter Invitational with a 36-hole score of 580.

No. 1 Coastal entered Day 2 of the tournament up seven strokes on No. 14 Truett McConnell and No. 21 SCAD Savannah, and it managed to put another stroke between itself and SCAD, which shot 588 to finish second.

With No. 9 USC Beaufort and a St. Thomas team receiving votes also among the 17-team field, it was a solid victory for Coastal Georgia in its first tournament of the spring semester.

“The long break through Christmas, that sorta sets us back a little bit because some of the guys live up in Canada, we’ve got a Kansas City, Chicago, and they come back and haven’t played in a while,” said Coastal Georgia men’s head coach Mike Cook. “But we try to get them ready, and we’ve had some good weather to play on. We play out here once a week, not every week, but we know the course pretty well.”

The long layoff doesn’t apply to Scott, who stayed plenty busy since the Mariners’ last tournament, a second-place finish at the Dave Adamonis Sr. Invitational in Doral, Fla., on Oct. 28-29.

Scott traveled to Arizona after Christmas to play 54 holes at Wigwam Golf Club from Dec. 29-31, and he became just the sixth Mariner to compete in the prestigious Jones Cup Invitational on Jan. 30-Feb. 2.

“I played in two big tournaments, the Patriot All-American in Arizona, and I played in the Jones Cup at Ocean Forest, and that prepared me to get back into competition play,” Scott said. “But I’ve kind of been battling a back injury over a couple of weeks, and I didn’t really know how I was going to perform this week, but I just kind of stuck to it, stuck to my routines and my game plans and got through it.”

Despite the injury, Scott finished under par on both days of Coastal Georgia’s Winter Invitational, his final score of 9-under 135 just two strokes back of Peterson, who bested him by a stroke each round.

Scott, GolfStat’s 17th-ranked golfer in the NAIA, is now 30 under par over his last 90 holes at Brunswick Country Club after winning the Golden Isles Invitational at the course in July.

“I don’t know, it just kind of fits my eyes,” Scott said of his success at BCC. “It’s kind of just like rip drive pretty much anywhere and I kind of know how to manage the greens. You can’t short-side yourself out here, got to be below the hole to be able to score.”

But the Mariners didn’t acquire their No. 1 ranking by relying on one player.

Juniors Chip Thompson and Jackson Lawlor, GolfStat’s fourth- and fifth-ranked players respectively, each shot a 3-over 147 to slot into a tie for 11th on the individual leaderboard. Joe Tucker shot a 10-over 154, and Shaun Margeson recovered from an 84 on Day 1 to finish at 14-over 158 for the tournament.

It was a gutsy victory for Coastal Georgia, which has won five of the six events its competed in this season, but there’s still plenty of room for improvement for a team with its eyes set on a national championship.

“The team kind of hung in there,” Cook said. “We struggled a little bit yesterday, our fourth and fifth guy; the top three played well.

“If we can just play a little more as a team, one through five, that’s all we need to do going forward if we’re going to win a championship. We’ve got to play well one through five. Even if a guy’s score doesn’t count, he needs to play like it’s counting, play like he’s going to win, and that’s how you win it.”

The Mariners were the top-ranked team in the nation last year entering the NAIA National Championship in Mesa, Ariz., having won seven of nine tournaments on the season, but they fell just short of their title goals.

The second-place finish only made Coastal Georgia that much hungrier this season.

“We’re going to look to make a good comeback,” Scott said. “We finished second last year, and it kind of felt underwhelming a little bit with how we performed throughout the year. But I think we’ve got a good chance this year, and we’re going to fight hard.”

The Coastal Georgia women’s golf team put together another strong outing on Day 2 of its Winter Invitational at King and Prince Golf Club, and it was enough to slide them into second place at the conclusion of the 36-hole event.

The Mariners followed up its opening round 308 by shooting 310 on Tuesday to finish with a 618, just six strokes back of champion Eastern Florida State.

Competing against a 14-team field featuring: No. 6 Dalton State, No. 14 Loyola, No. 15 USC Beaufort, and SCAD Atlanta, which along with Coastal, is receiving votes, the Mariners notched their best finish of the season in their first tournament back from winter break.

Coastal Georgia entered the final round seven strokes back of Eastern Florida State for first, and one back of second-place Dalton State, but a couple of Day 2 turnarounds by Lauren Bird and Megan Thompson helped the Mariners gain ground.

Bird found herself just inside the top 20 individually following her first round 7-over 79, and she fired off a 1-over 73 in her second round to finish in a tie for fifth at 8-over 152 for the tournament. Thompson had Coastal Georgia’s highest round Monday, but she recovered from a 13-over 85 to shoot a 5-over 77 over the final 18 holes and finish in a tie for 26th at 18-over 162, along with teammate Keista Elder.

Megan Ramer, the 90th-ranked player in GolfStat’s NAIA top 150, shot a 13-over 157 to finish in a tie for 16th. The 106th-ranked Wheeler couldn’t maintain a hot start that had her tied for first on the individual leaderboard and finished tied for seventh with a score of 9-over 153.

Blanca Porter of USC Beaufort won the individual title at 2-over 146.