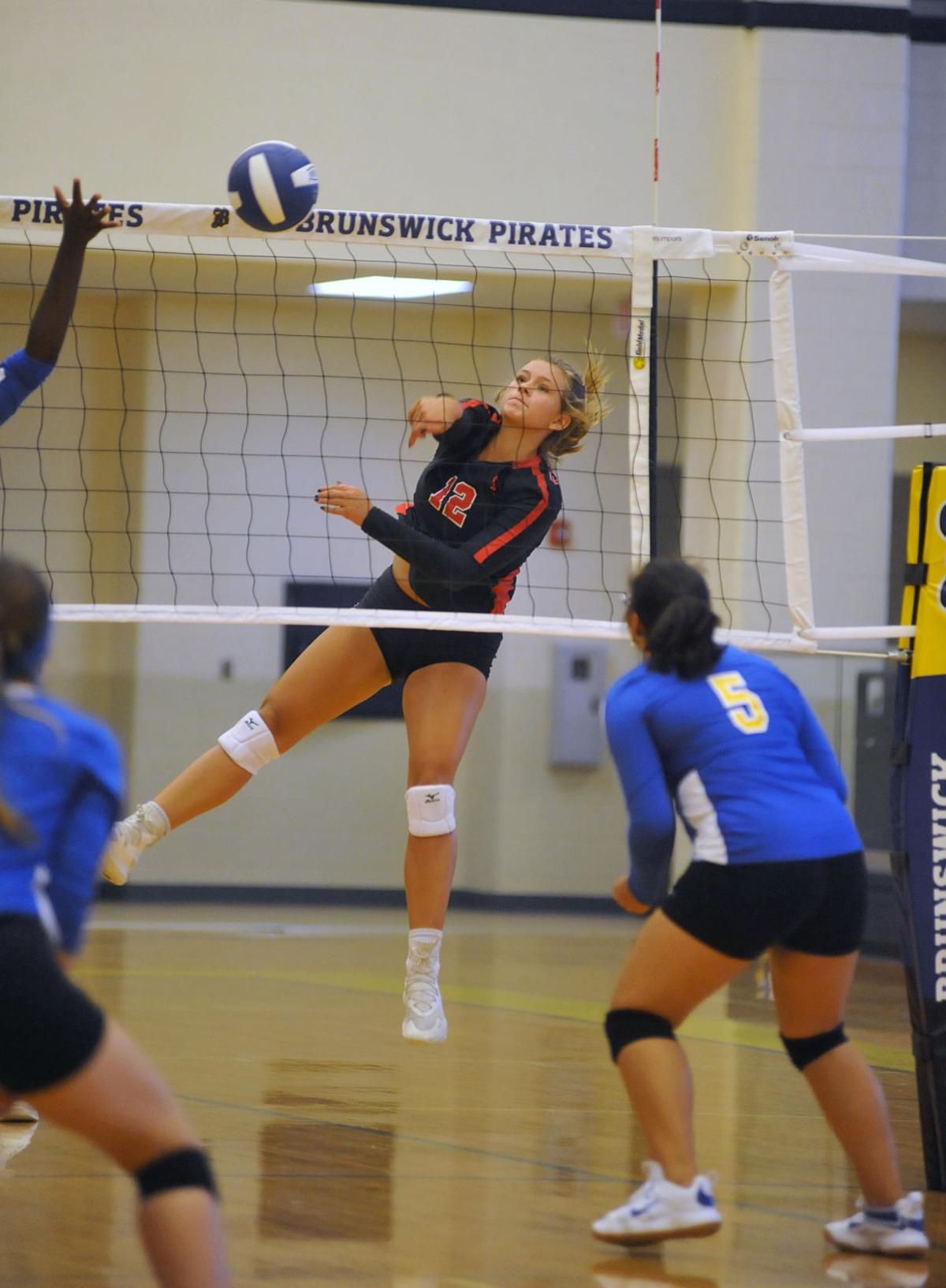 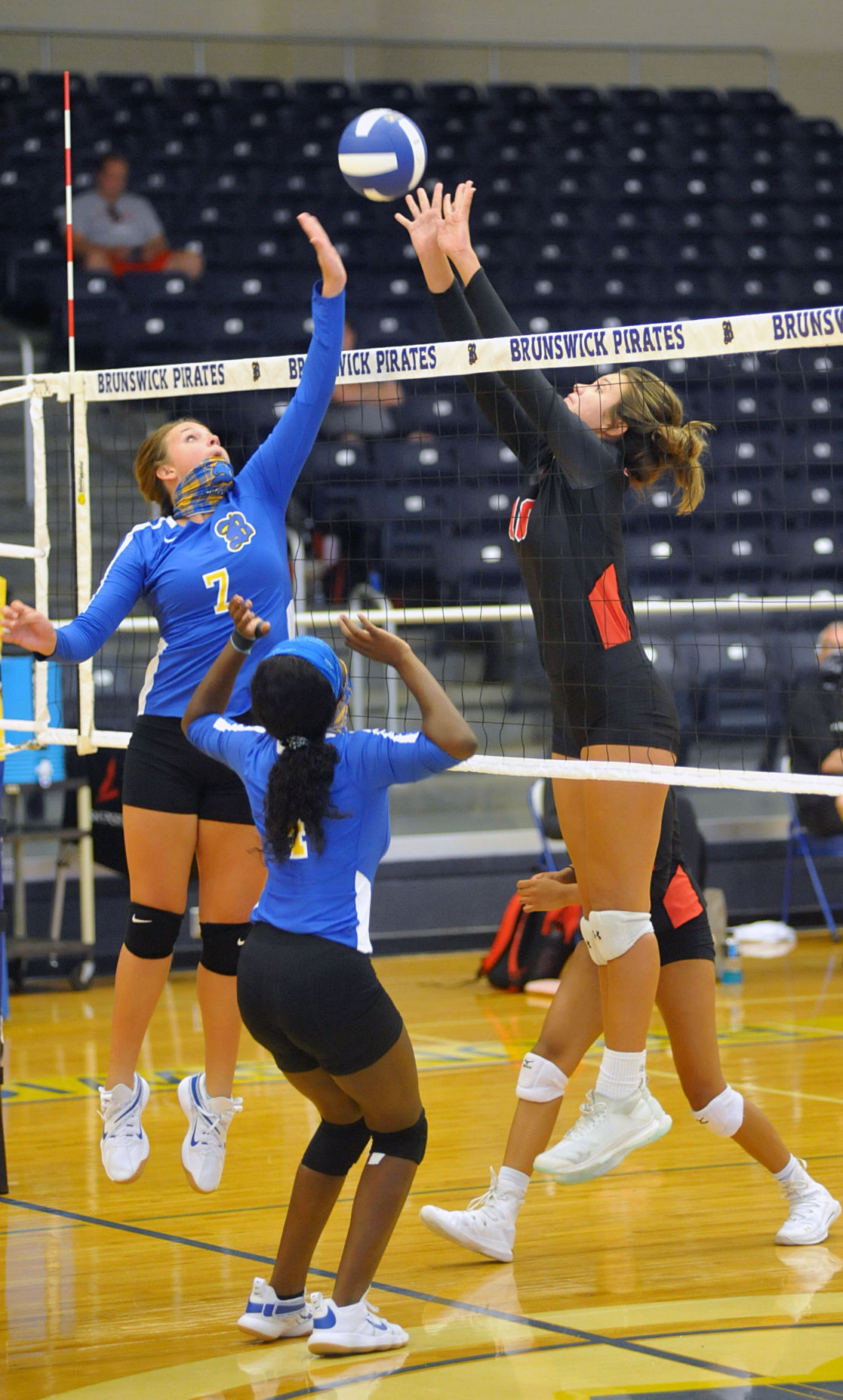 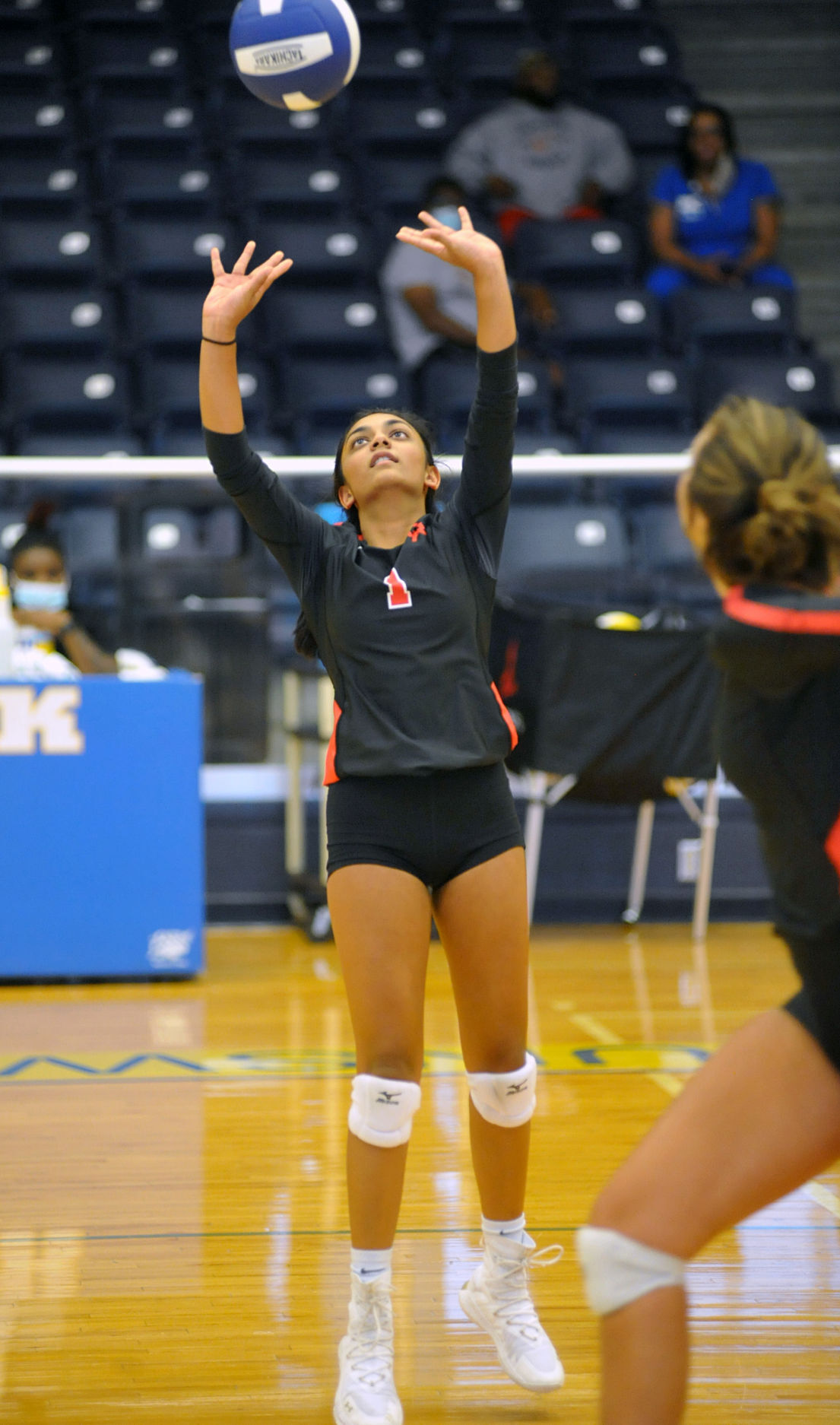 Glynn Academy's Shyama Patel sets for a teammate during a match Friday against Brunswick High. 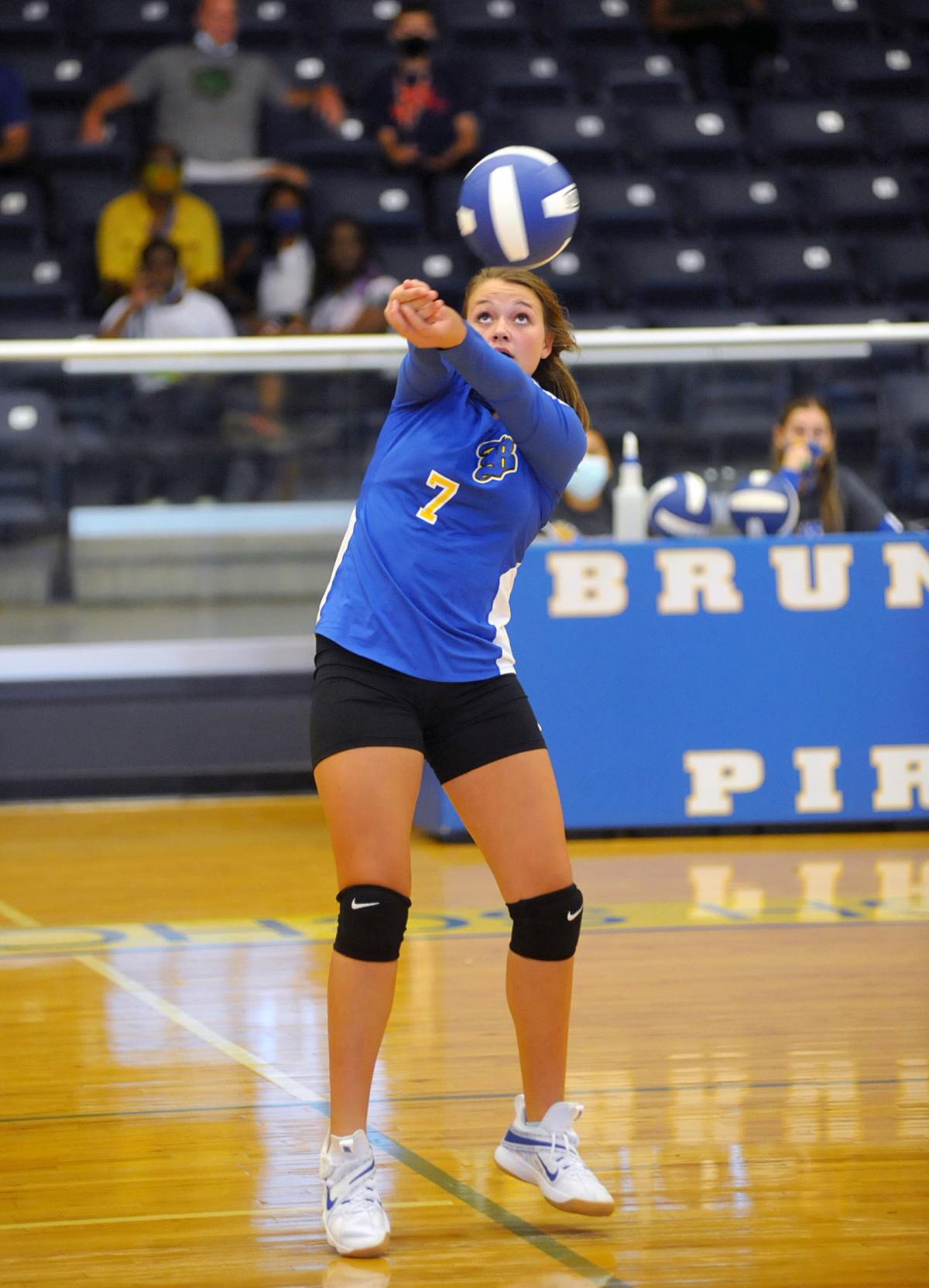 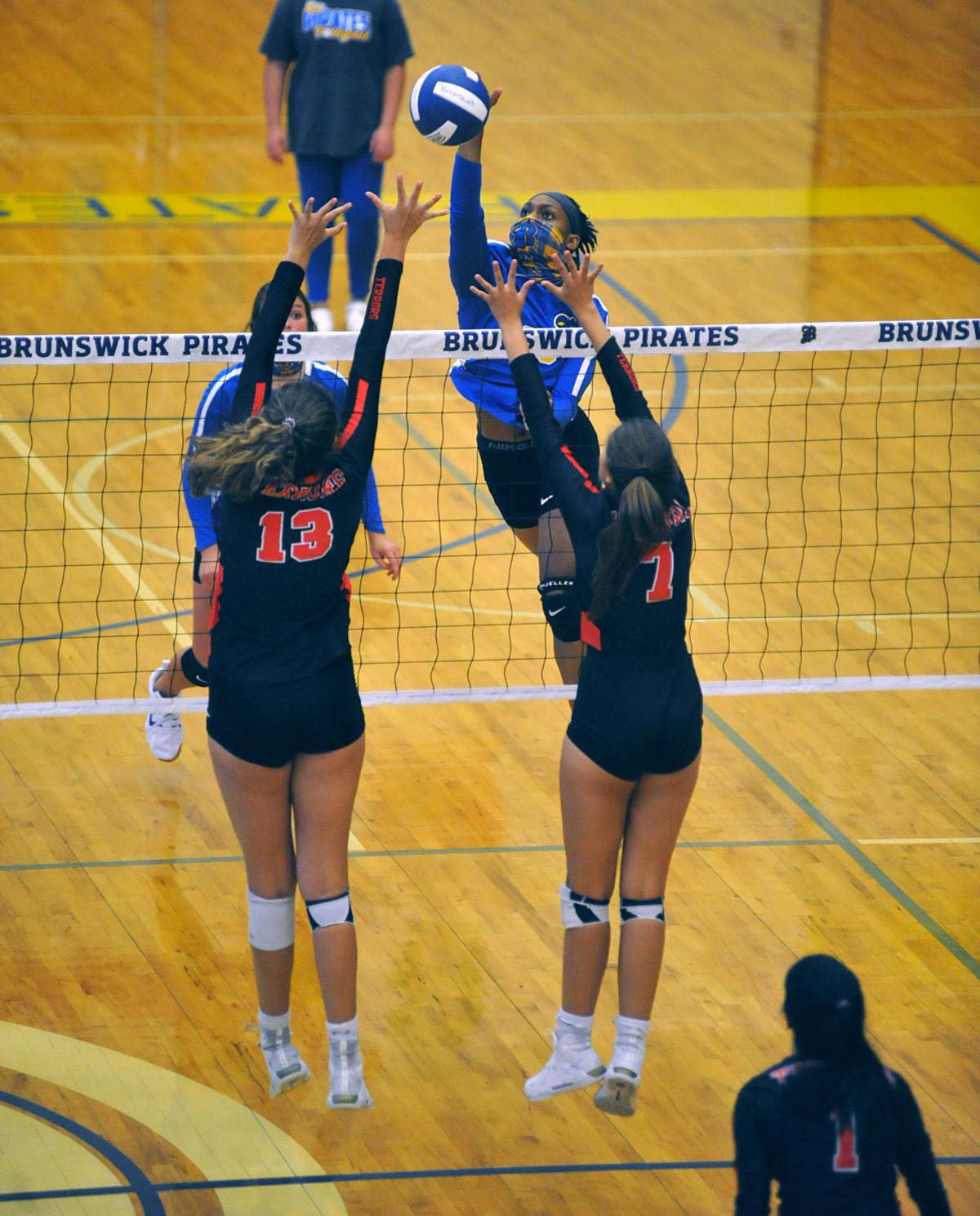 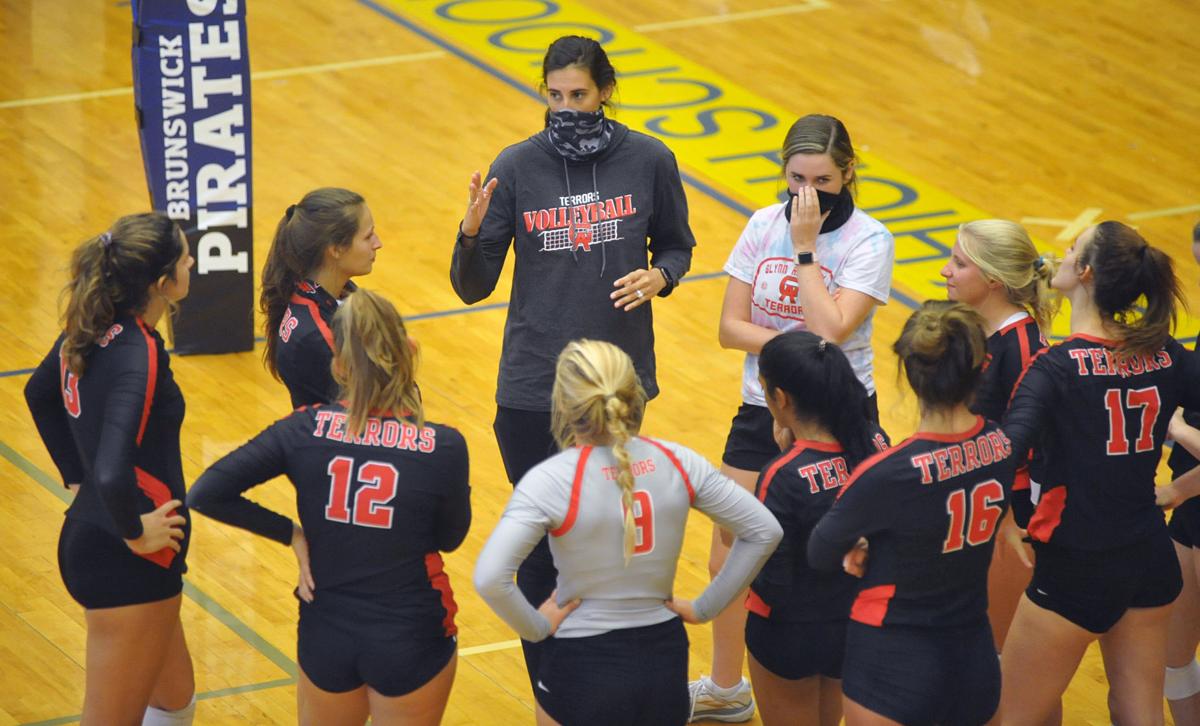 Glynn Academy head coach Emily Wylie speaks to her team during a timeout Friday during a match against Brunswick High. 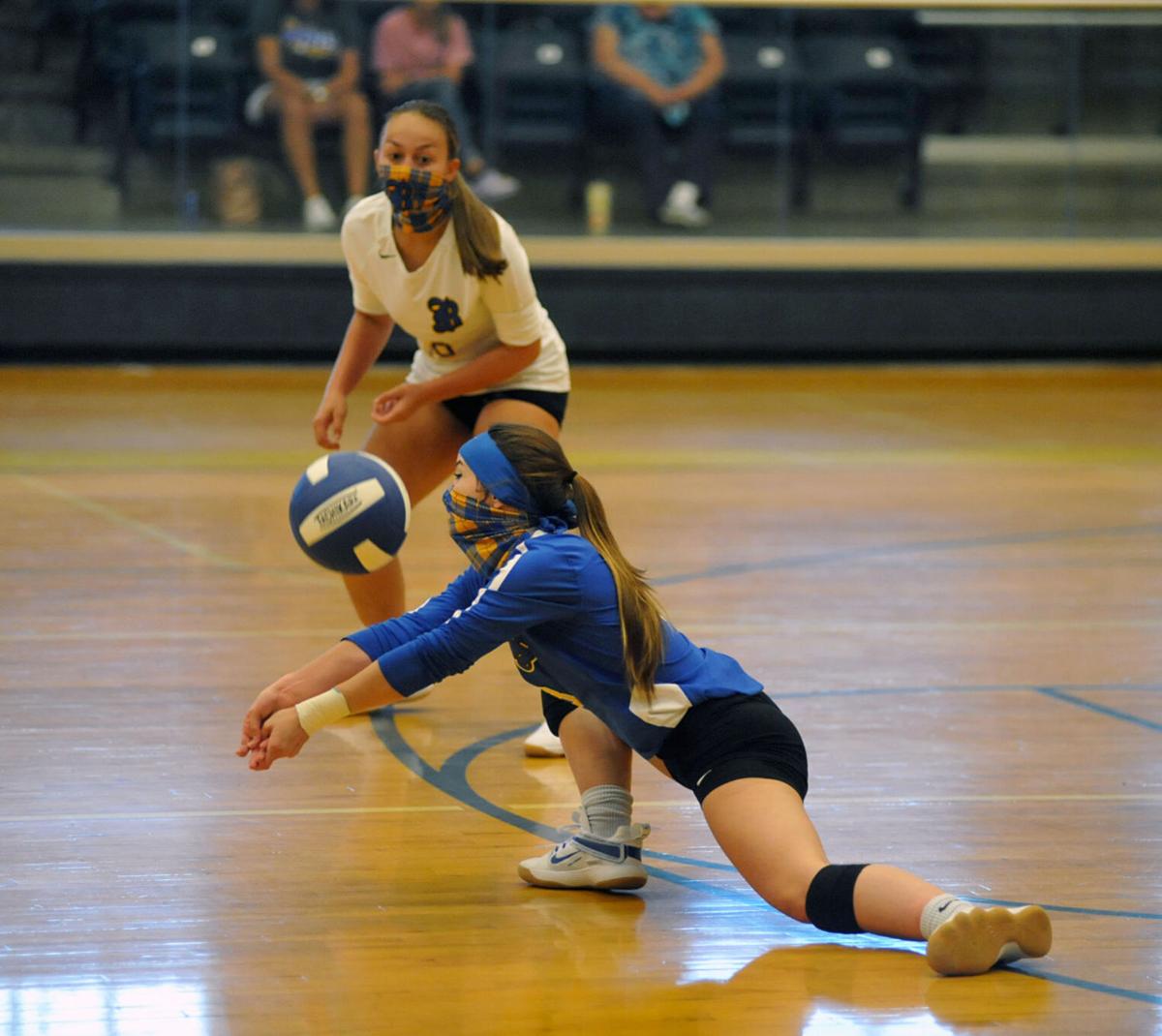 Glynn Academy's Shyama Patel sets for a teammate during a match Friday against Brunswick High.

Glynn Academy head coach Emily Wylie speaks to her team during a timeout Friday during a match against Brunswick High.

Glynn Academy served notice to crosstown rival Brunswick High on the volleyball court Wednesday: the Terrors are still the team to beat in Region 2-6A.

Glynn defeated Brunswick in straight sets 25-16, 25-9 at Brunswick Square Garden to improve to 2-0 in region play early this season.

The Pirates did their best to hang with the Terrors early in both sets, rallying back from a 12-6 deficit in the first set to draw within 12-10 and force a Glynn timeout. In the second set, Brunswick actually jumped out to a 4-0 lead before Glynn Academy got on the board.

But both times, the Terrors were able to string together long runs to pull away and win the sets.

“We will continue working every day to bring what we do in practice to a match and finish a complete set,” said Pirates head coach Jasmine Hubbard.

More often than not, Brunswick lost hold of the rope when Glynn Academy had a strong server delivering strikes over the net.

During the decisive stretch in the second set, the Terrors scored 16 of the final 17 points — Brunswick’s only score during the span coming on a Glynn service error.

“We definitely have very aggressive servers who take serving very seriously,” said Terrors head coach Emily Wylie. “You start off strong, it obviously helps a lot. It also helps our service team as well, help them get better practice when we’re in the gym competing against each other.

“But starting off with a strong, good serve is definitely a big component of the game.”

Many times, the Pirates failed to control the first hit, and when they did, they found it difficult to put together a strong offensive possession against the Terrors with sophomore Riley Mansfield lurking in the middle.

Mansfield took advantage of her 6-foot-4 frame to dominate the net on both sides of the court against a much smaller Brunswick team.

“She’s just a strong, solid player,” Wylie said. “She’s young and has so much to accomplish, but she’s already come so far. She’s big at the net, has high hands, and just wants to go get the ball.”

Brunswick now falls to 0-2 in the region after also dropping a match to Richmond Hill last week.

Glynn Academy, on the other hand, has now won two straight against foes from Region 2-6A, having defeated Effingham County 3-2 on Tuesday evening.

“As long as they’re having fun, and they’re getting better, I’ll be happy with that,” Wylie said.

The new roundabout at Demere Road and the East Beach Causeway got an addition Monday that won’t affect traffic flow, but it will enhance the driving experience.

More than once this school year, Patricia Blash has had to watch helplessly as her two granddaughters broke down into tears.

It’s not business as usual at The Westin Jekyll Island, but things are beginning to return to normal.