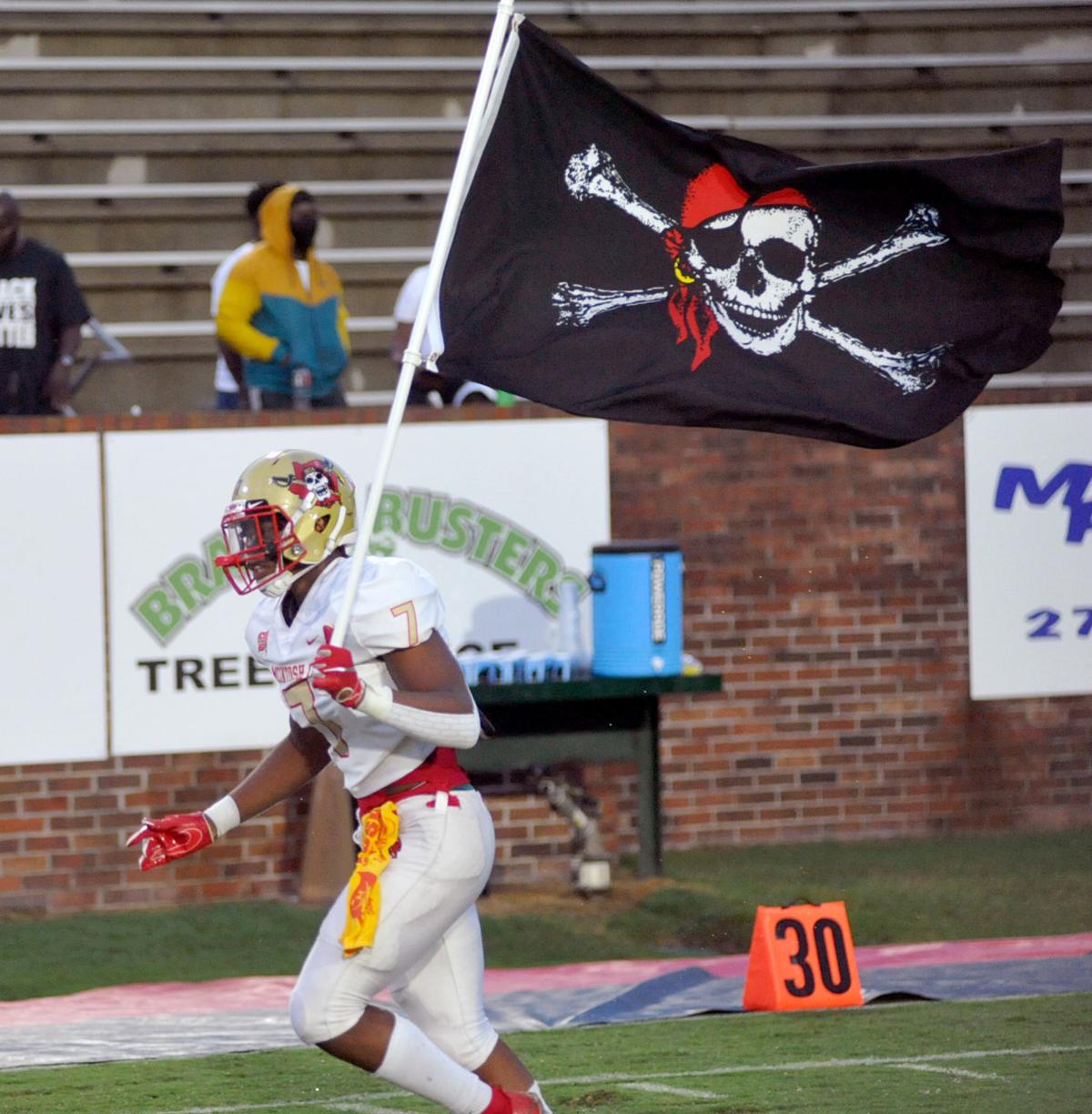 McIntosh County Academy's Trenton Johnson carries a Buccaneer flag as he runs out onto the field before a game against Brunswick High at Glynn County Stadium. 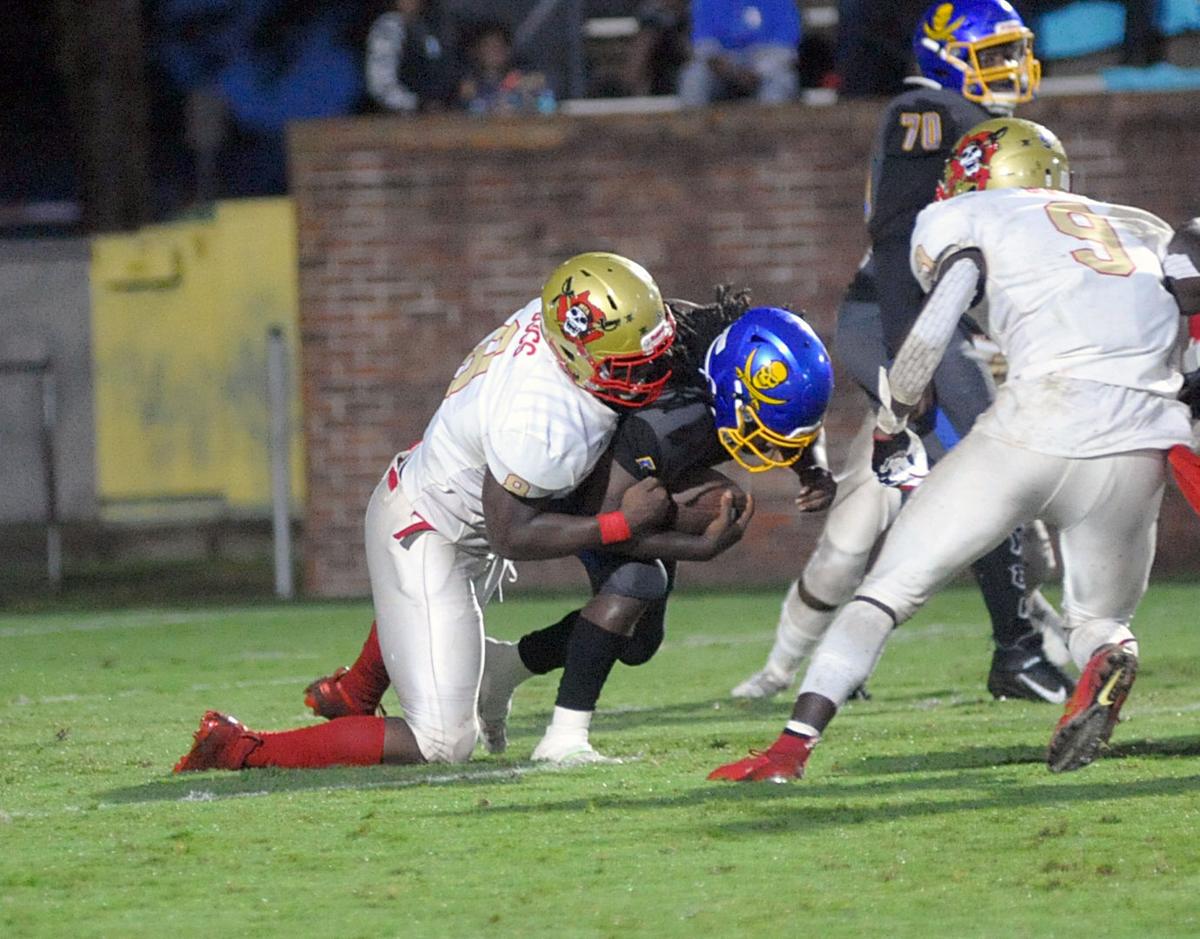 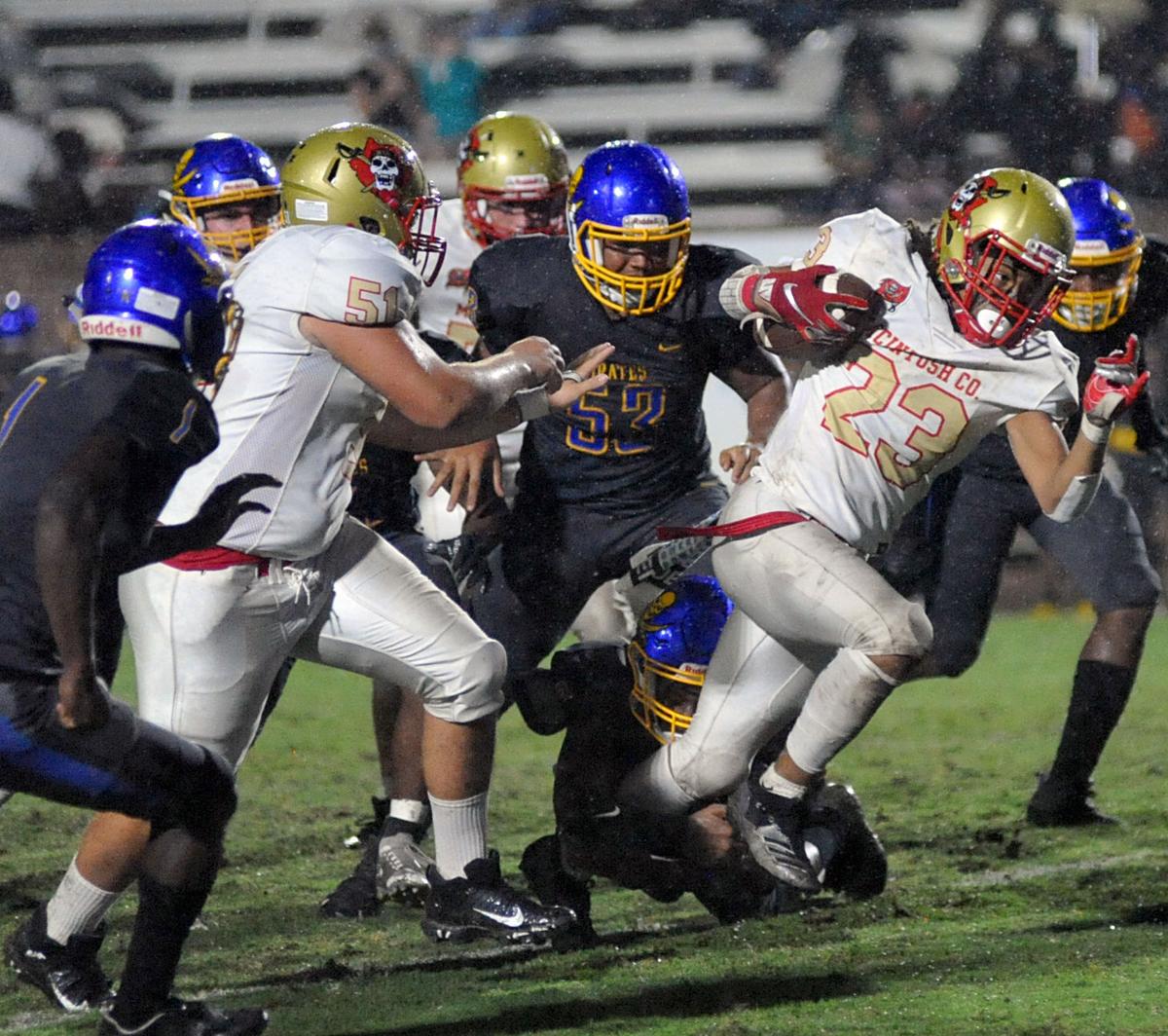 McIntosh County Academy's Trenton Johnson carries a Buccaneer flag as he runs out onto the field before a game against Brunswick High at Glynn County Stadium.

“Their confidence level is high right now,” said Buccaneers head coach Bradley Warren. “They’re playing well, their spirits are high. We’re having to deal with being a little banged up, we play pretty physical.

“We have an off week next week, so if we get through this one, we’ll heal up hopefully on this off week and make a good finish.”

Running its offense out of the wing-T, McIntosh County Academy averages 25.2 points per game, racking up an average of more than 300 rushing yards over its first five contests. Trenton Johnson has been the standout ballcarrier for the Bucs once again as the senior is on pace for a historic season.

Johnson ranks third in the state with 946 rushing yards — just 56 yards back of rushing leader Jessie Phelps Jr. of Rutland — and his 12 touchdowns are tied for the second-most coming off a 248-yard, four-touchdown performance a week ago.

In the last meeting against ECI, Johnson rushed for 106 yards and two scores, but he also had a costly fumble that potentially took points off the board and led to a Bulldog touchdown in a five-point game. In total MCA lost two fumbles and turned the ball over on downs just outside red zone in its playoff game.

The Buccaneers would surely love to see how they stack up against the Bulldogs when they’re not beating themselves.

“They’re anxious for a rematch,” Warren said. “We didn’t play very well in that last ballgame, there was wet weather.

“So we’re looking forward to a rematch.”

Although Emanuel County will be without stud fullback Ja’Rell Jordan, who rushed for more than 1,600 yards and 20 touchdowns as a senior, the program returns nearly 1,700 yards worth of rush yards between backs PJ Farnum, Takyle Foreman, D.J. Jones, Natavus Robertson, and Dalton McCoy.

Defensively, the Bulldogs are led by Michael Kelly, a linebacker that recorded 102 tackles and nine tackles for a loss last season, as well as defensive end Chris Jackson, who made 77 stops, 20 coming behind the line of scrimmage.

ECI’s losses mostly occurred in the trenches on both sides of the ball, which could spell trouble against an MCA front that’s mauled opponents through five games.

A victory Friday would all but guarantee McIntosh County Academy its second consecutive playoff berth.