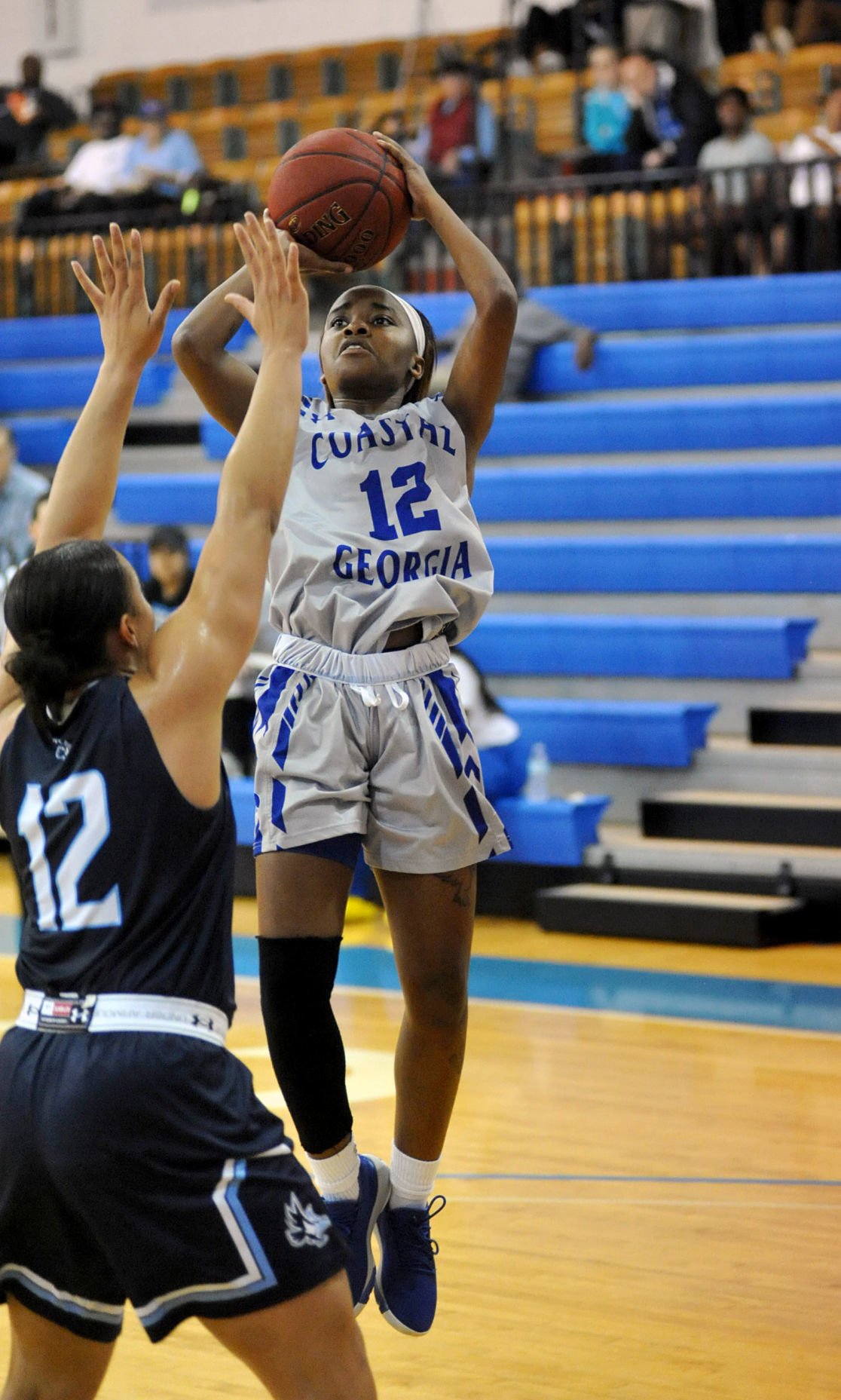 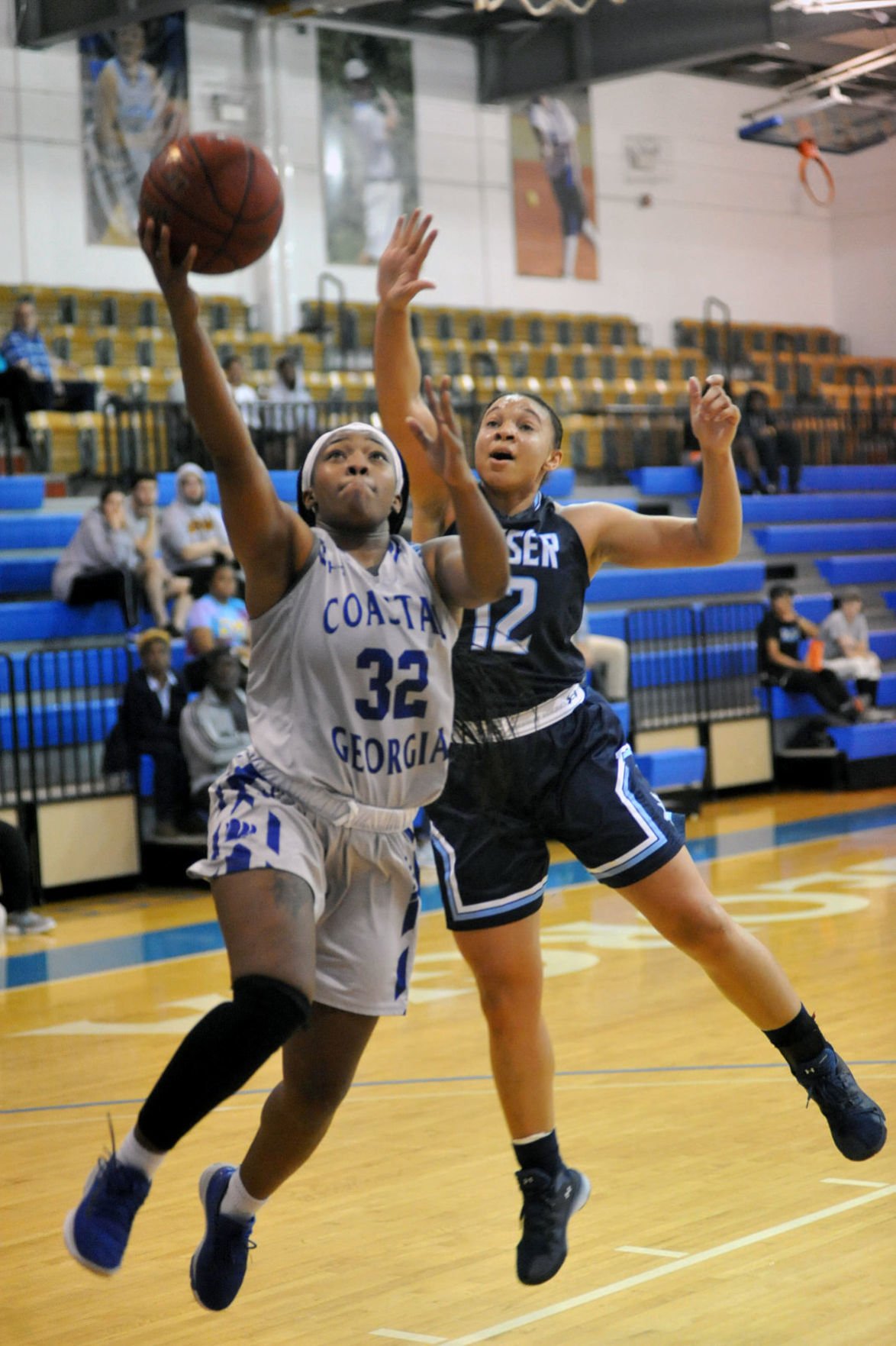 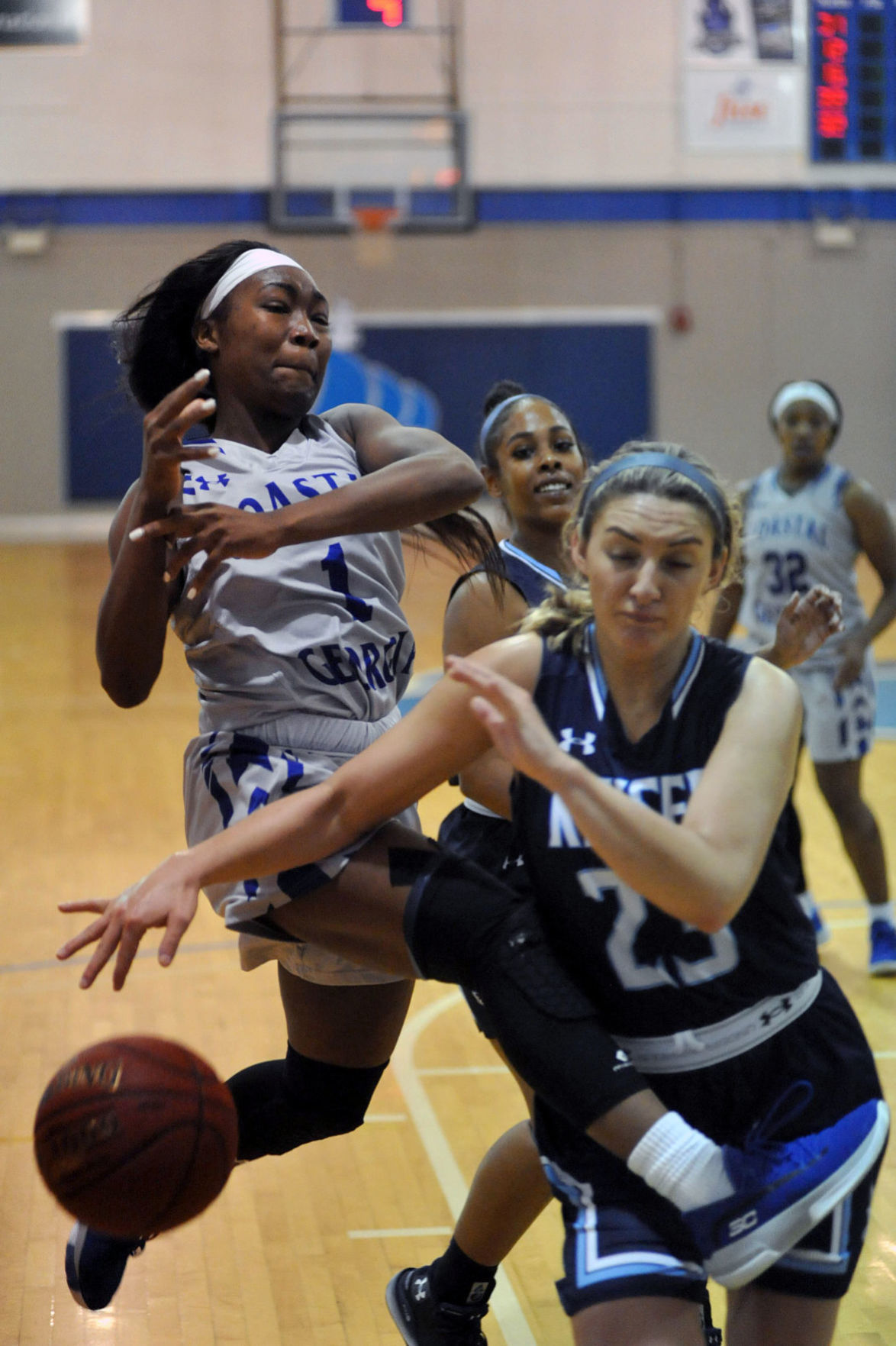 Coastal Georgia's Ariel Crump is stripped on a drive against Keiser on Thursday at Howard Coffin Gymnasium. 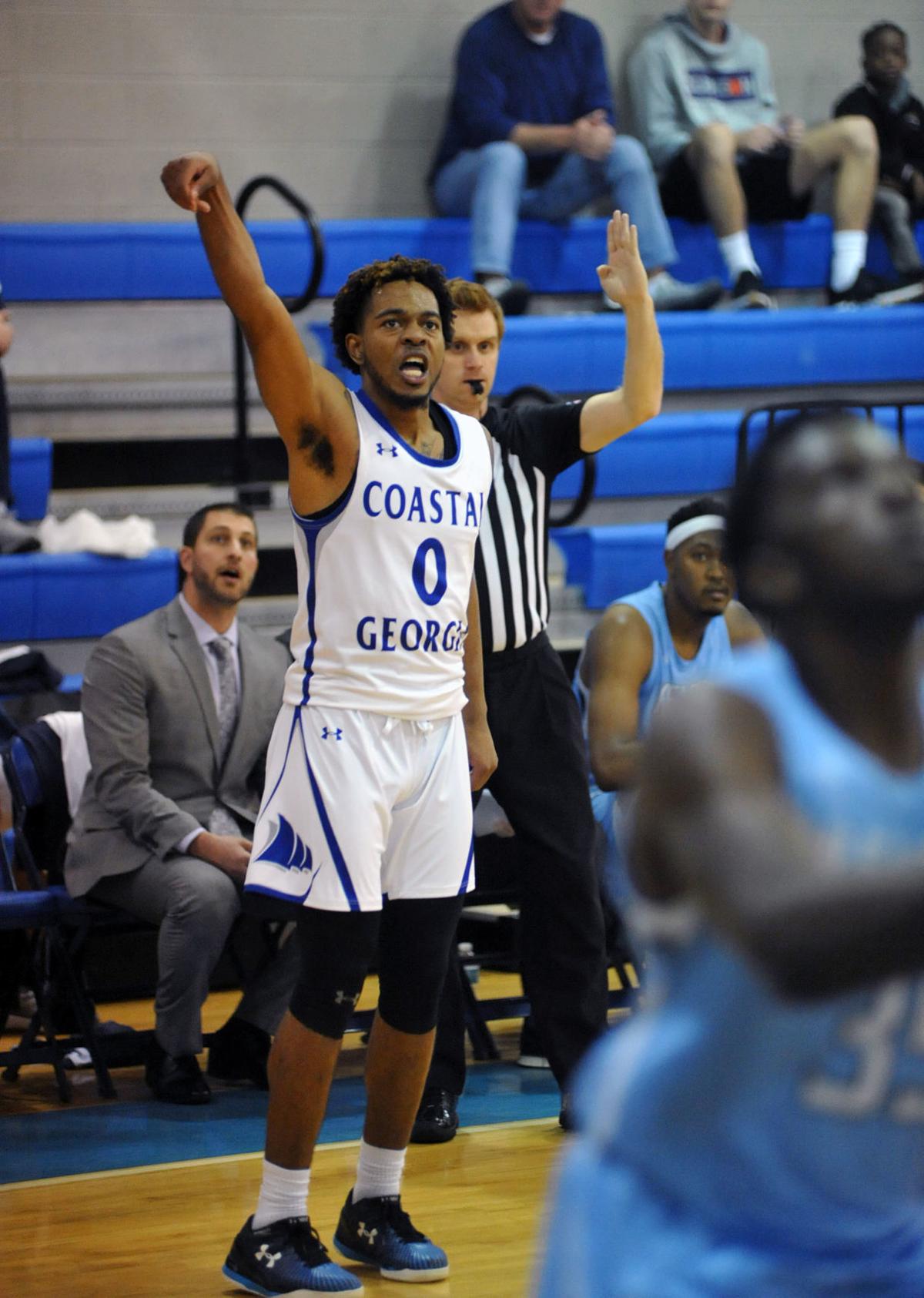 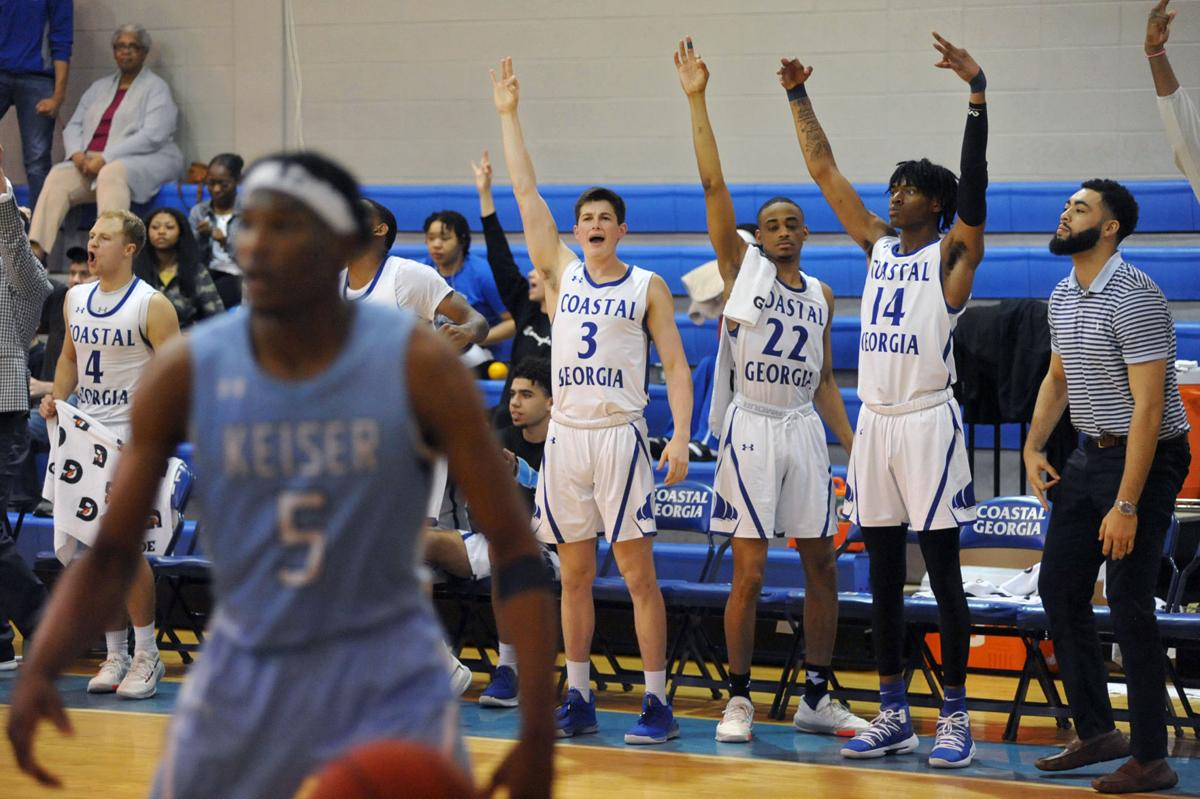 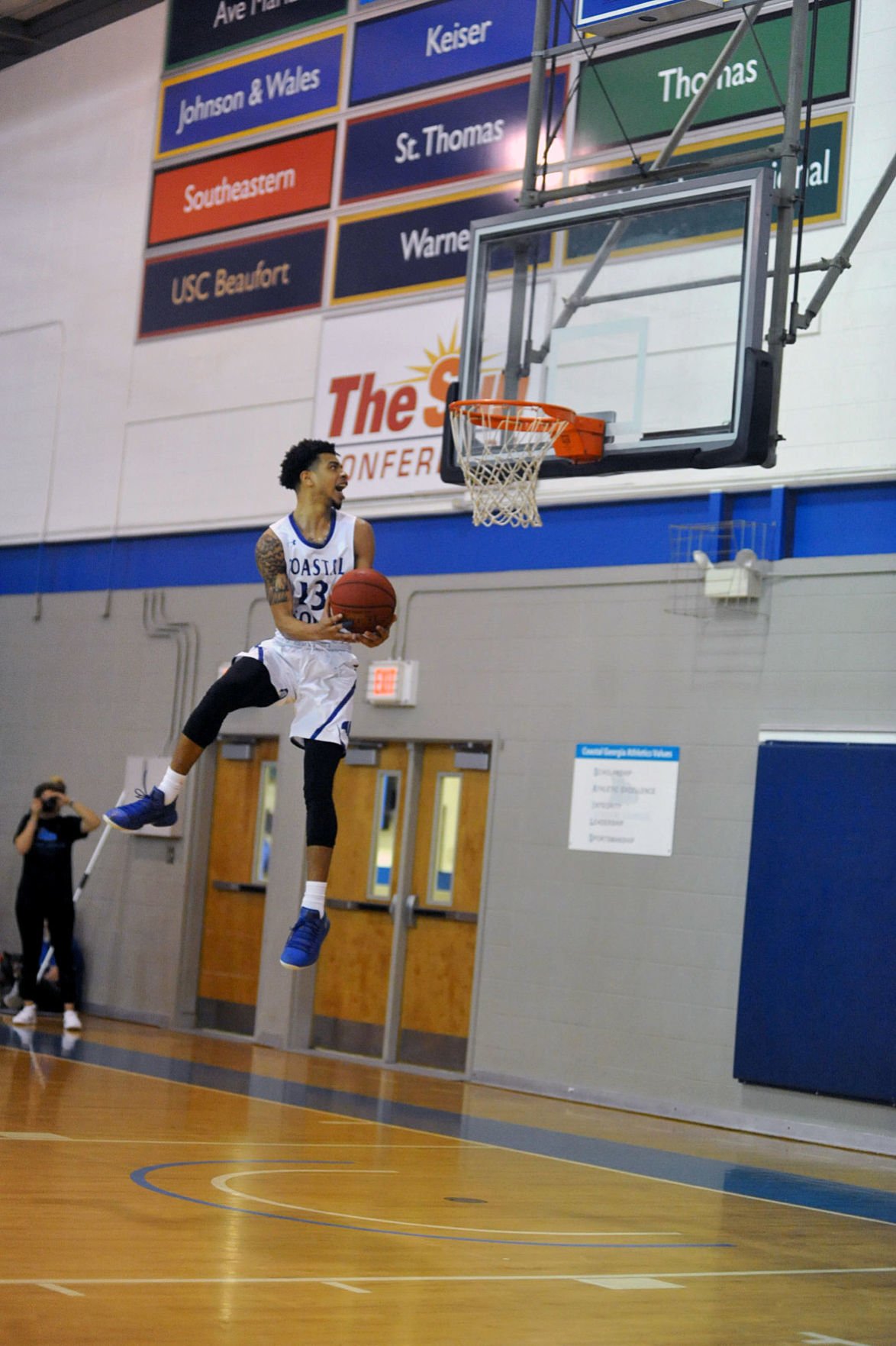 Coastal Georgia's Ariel Crump is stripped on a drive against Keiser on Thursday at Howard Coffin Gymnasium.

Instead, he called Little’s 30-point performance in the Mariners’ 71-68 victory Thursday at Howard Coffin Gymnasium the natural progression of what she’s been doing for weeks now.

“It’s amazing just seeing how much she’s grown in such a short period of time,” Hodge said. “Because at the first of the year, there were those freshman struggles in a big way, and I think a lot of it was not letting go and doing the things she’s capable of doing.

“Now she’s playing a lot more free, a lot more confident. I think she gets how good she is.”

Little entered the game averaging 9.5 points in her true freshman season, but she’s taken her play up another level since the turn of the new year, scoring 15.9 points per game over 10 games in 2020.

Thursday may have been her finest performance yet.

She was 9-of-20 from the field, dished out two assists, snagged three boards, and recorded a pair of steals. Perhaps most importantly, Little was 12-of-14 from the free throw line on a night Coastal shot just 22-of-37 as a team.

While Hodge would have preferred a better shooting percentage from the charity stripe, he was pleased to see his team get to the line more frequently than Keiser, which finished 13-of-20 from the free throw line.

“One of our team goals is to make more free throws than the other team attempts, and we were able to do that tonight,” Hodge said. “That was because we went into the post, we attacked the goal. We executed that part really, really well.”

Keiser actually shot better than Coastal Georgia did from every part of the court. The Mariners’ advantage came in taking care of the ball, as they coughed up just 12 turnovers compared to 23 for the Seahawks.

But neither team was ever able to turn their advantage into a sizable lead throughout the contest. Although Coastal Georgia never led by double digits the entirety of the game, it also didn’t trail again after the 2:50 mark in the second quarter.

“A lot of credit to Keiser, they are just a tough-minded team,” Hodge said. “Well coached, they play hard, tough kids. That’s what we talked about all week in our prep for them. We sort of knew this was kind of going to be a street fight, but our kids didn’t back down from it.”

The Seahawks worked to run the Mariners off the 3-point line, where they’ve averaged nearly 4.5 makes per game this season, holding Coastal to just 1-of-8 from long distance.

Solrun Gisladottir, who is shooting 39 percent on 148 attempts from 3 this year, was 0-5 against Keiser.

“I think that says a lot about what kind of game it was,” Hodge said. “They were going to take the 3 away from us, so kids like Kaliyah and Lynsey, who are more slashers going to the bucket, had to step up, and they did.”

In addition to Little’s scoring exploits, Lynsey Washington tied her season high with 20 — just two points shy of setting a career high for the senior.

Coastal will attempt to extend its win streak to four when it hosts a Johnson & Wales team receiving votes in the national poll Saturday at 12 p.m.

The Mariners threw the first punch Thursday, and after getting punched back by No. 14 Keiser, the Coastal Georgia men were still able to scrape out an 83-74 victory in The Sun Conference on Thursday at Howard Coffin Gymnasium.

Coastal (12-13, 5-8) landed a haymaker in the first half against Keiser (19-4, 11-2), leaving the Seahawks shellshocked and trailing by 41-27 at the end of a first half that saw the Mariners win the rebound battle 25-12, including 10-2 on the offensive glass, and score more than half of their points in the paint.

Coastal Georgia also outscored Keiser 13-3 in points off turnovers despite turning the ball over just one time fewer through the first 20 minutes of game time.

The gulf in the rebounding battle wasn’t quite as large in the second half, but the Mariners still finished with 48 rebounds to 32 for the Seahawks.

Neither team shot the ball well in the first half, but after hitting on just 3-of-13 attempts from long distance in the first stanza, Coastal splashed in half of its 10 attempts in the second half with Jaylan Patrick knocking down 4-of-7 3-pointers after halftime.

Devonta Leslie scored a team-high 16 points for the Mariners, and it could have been more had he finished a spectacular dunk attempt in the game’s waining seconds.

After falling behind by 14 at the half, Keiser roared back and tied the game with more than 12 minutes to play, but it was unable to ever regain the lead.