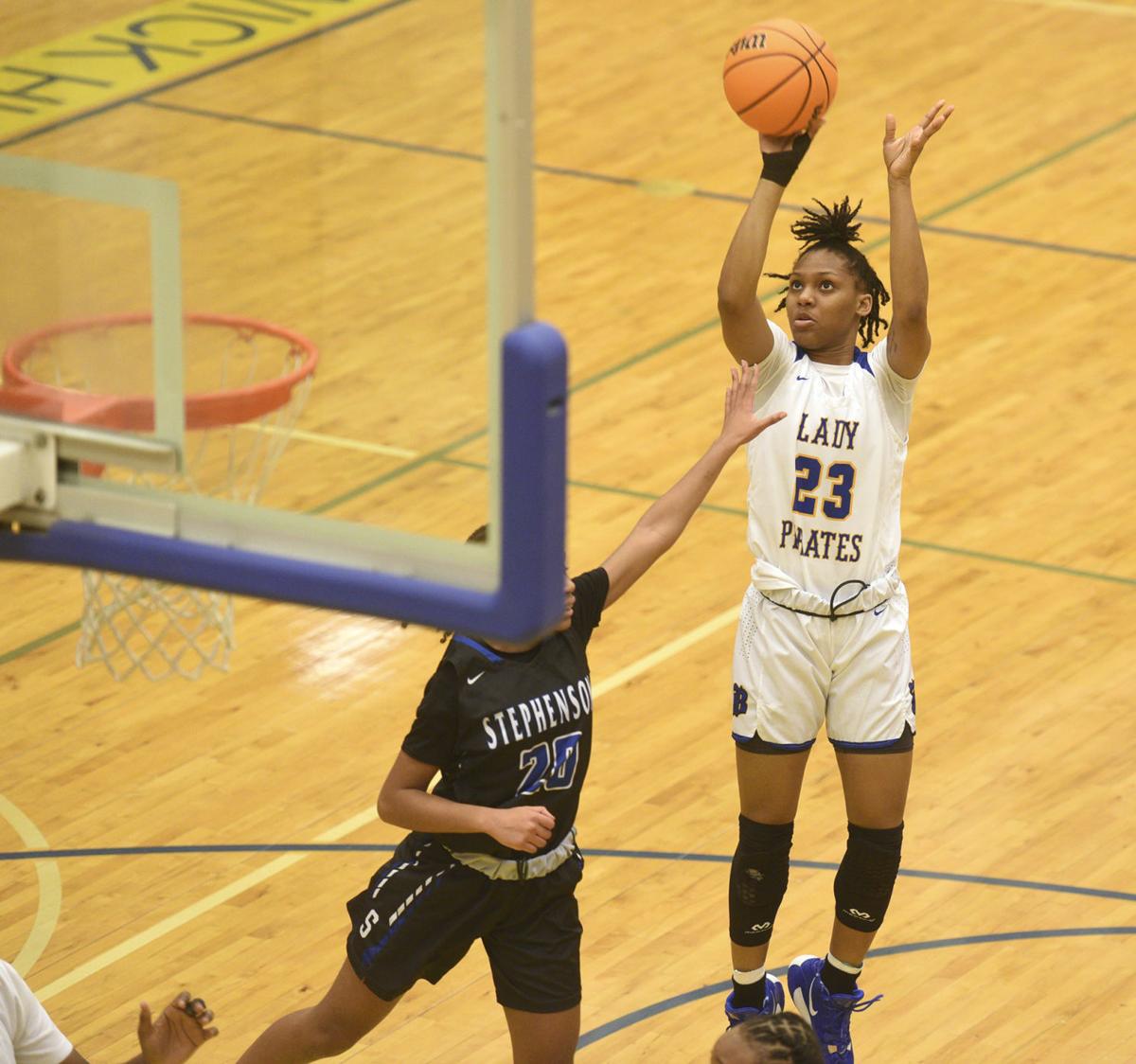 Makaila Brown shoots a jump-shot over the Stephenson defender on Friday night. 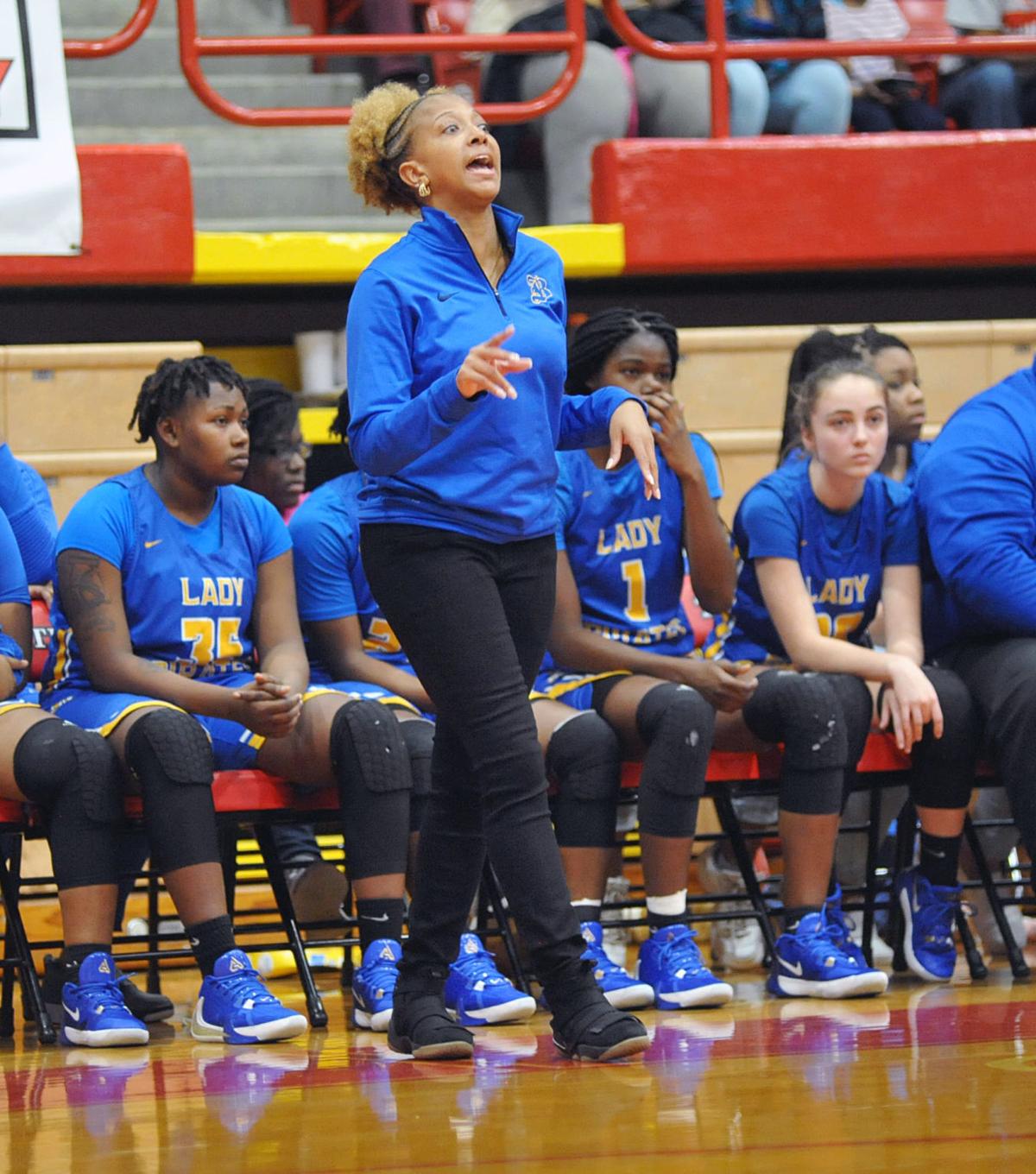 Brunswick High girls head basketball coach Maria Mangram calls out to her team during a game against Glynn Academy this season.

Makaila Brown shoots a jump-shot over the Stephenson defender on Friday night.

Brunswick High girls head basketball coach Maria Mangram calls out to her team during a game against Glynn Academy this season.

Both teams are looking to continue their playoff runs as they were able to silence their first-round opponents. Dacula defeated South Cobb 61-59 while Brunswick knocked off Stephenson 53-46.

The Falcons earned their No. 1 seed after defeating Lanier to win the Region 8-6A title and currently hold a 25-3 overall record.

Lanier was one of three squads to defeat Dacula this season and the last to do it on Jan. 24 when they won 46-27. The other two losses came at the beginning of the season to Wesleyan and Oak Ridge out of Tennessee.

Dacula coach Jason Adams said his girls are excited about facing off with the Pirates and being in the Sweet 16.

“They know they’re up against a very talented, deep and well-coached Brunswick team,” Adams said. “Everything I have seen and heard about them speaks to them playing well right now, so we know we had better be ready to play our best.”

Brunswick will have a tall task defending the Falcons tonight, but Pirates coach Maria Mangram said that this week was a refresher on the defense they plan on using to contain their top scorer.

“They do have a nice post player and have a couple of guards, so you can see how they’ve been successful,” Mangram said. “We’re just going to try and attack. I still like our chances of getting more rebounds than them. We’re a little bit bigger than they are, so it’s just kind of what we’re going to bank on and try to contain the big.”

Brunswick has juniors Makaila Brown and Zaniah Bradley down low they can use. The Pirates also have senior Keya Daniels that can drop down and play low if needed.

There is also freshman, Shané Jackson, that the Pirates like to bring in for specific combinations.

“We have multiple post players, and they just have one,” Mangram said. “Hopefully, our post players can contain that one. They have a guard that does shoot the three-ball decent, so we will have to expand a little bit too.”

Dacula has two girls scoring in double-digit this season. The Falcons leading scorer and rebounder is sophomore Lazaria Spearman, who averages 17 points and 16 rebounds a game.

Nyla Rose Moore is Daucla’s other double-digit scorer. She averages 10.1 points, 4.1 assists, and three steals a game. Jin Sileo is also a key contributor for the Falcons as she averages 8.4 points a game and can shoot consistently from beyond the arc.

While the Falcons have their playmakers, so does Brunswick.

Brown averages 12 points, 8.9 rebounds 2.1 blocks and has four 20 point games, including one against Stephenson in the first round of the playoffs.

Brown has scored at least 10 points in 15 games this season, also tallying at least 10 rebounds in 13 of those 15 games.

When Brown is on, she can be a deadly force on the court for the Pirates. Daniels is also someone Brunswick can rely on offensively and defensively. She averages 9.5 points a game, 6.6 rebounds, 2.6 assists and 3.1 steals a game.

Heidt may not have a high point average, but she can surprise a team from beyond the arc when she gets hot.

For Brunswick to win this game, Mangram said they must avoid turnovers.

Brunswick will have to travel to Dacula, and the Pirates don’t have the best away record as they went 3-7 this season. The Falcons are 11-1 at home, so they know how to defend their turf.

While the Pirates don’t have the best road record, Mangram said that they play better in front of a smaller crowd.

“When the gym is packed, we cannot do what we’re supposed to do, but when not very many people are here, we tend to do very well,” Mangram said. “So I don’t know what their crowd is going to be like, I understand they’re out of school this week, so that may affect it. We still expect to take some fans with us, so we will try to be as ready as you can be at this point.”

The Pirates played with a ton of heart against Stephenson, which was one of the reasons they defeated the Jaguars. After surpassing what last year’s squad did, the Pirates will have to continue to fight for these games because every team is good at this point in the season.

“I think as a coach these games now coming up, it’s really about who wants it more,” Mangram said. “The best team may or may not win. It’s all about how you’re playing.”