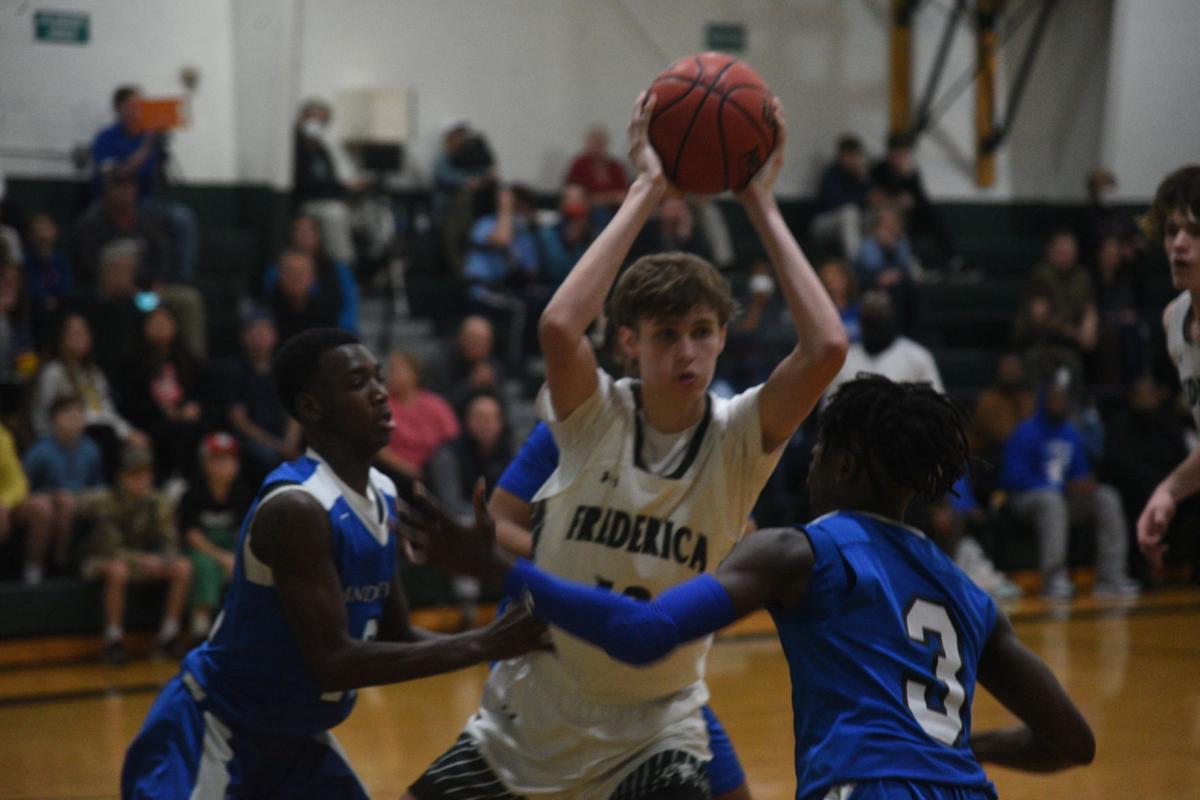 Frederica’s William Jobe deals with a double team during the teams game against St. Andrews. 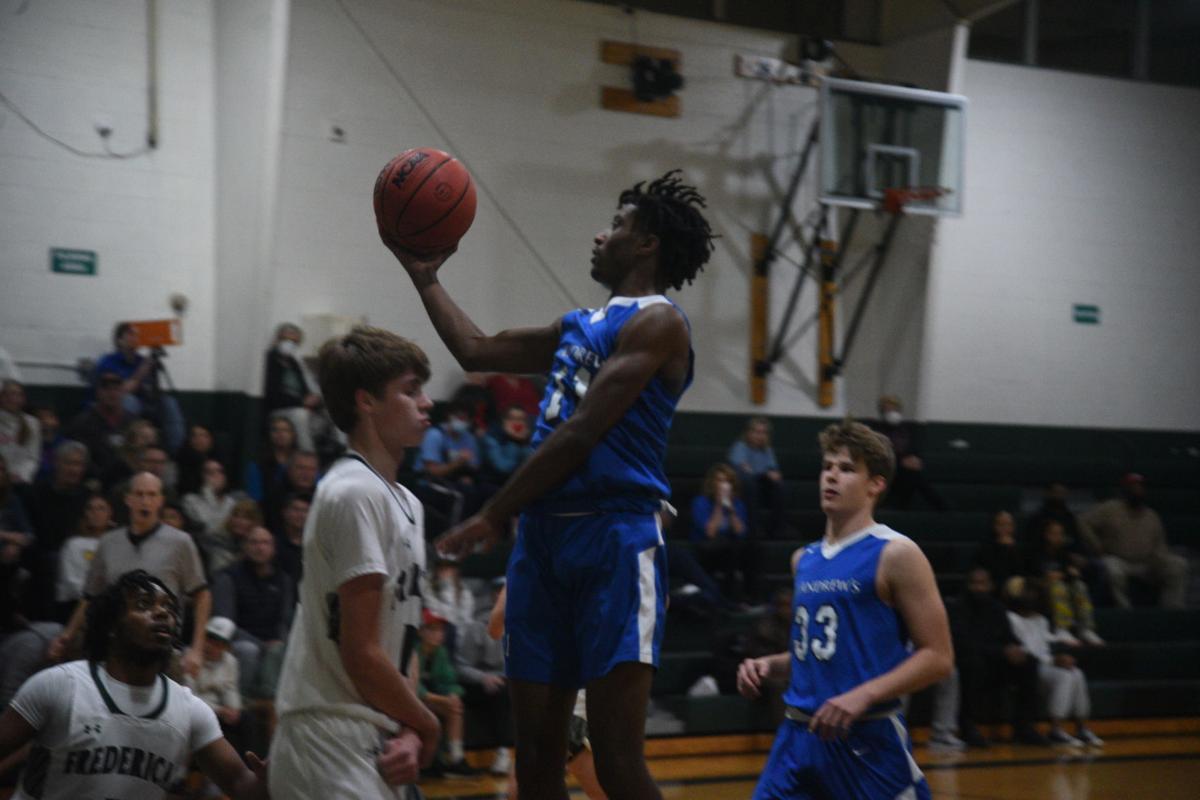 St. Andrews's Kaleb Lofton goes up for the scoop layup as Frederica's William Jobe attempts to take a charge. 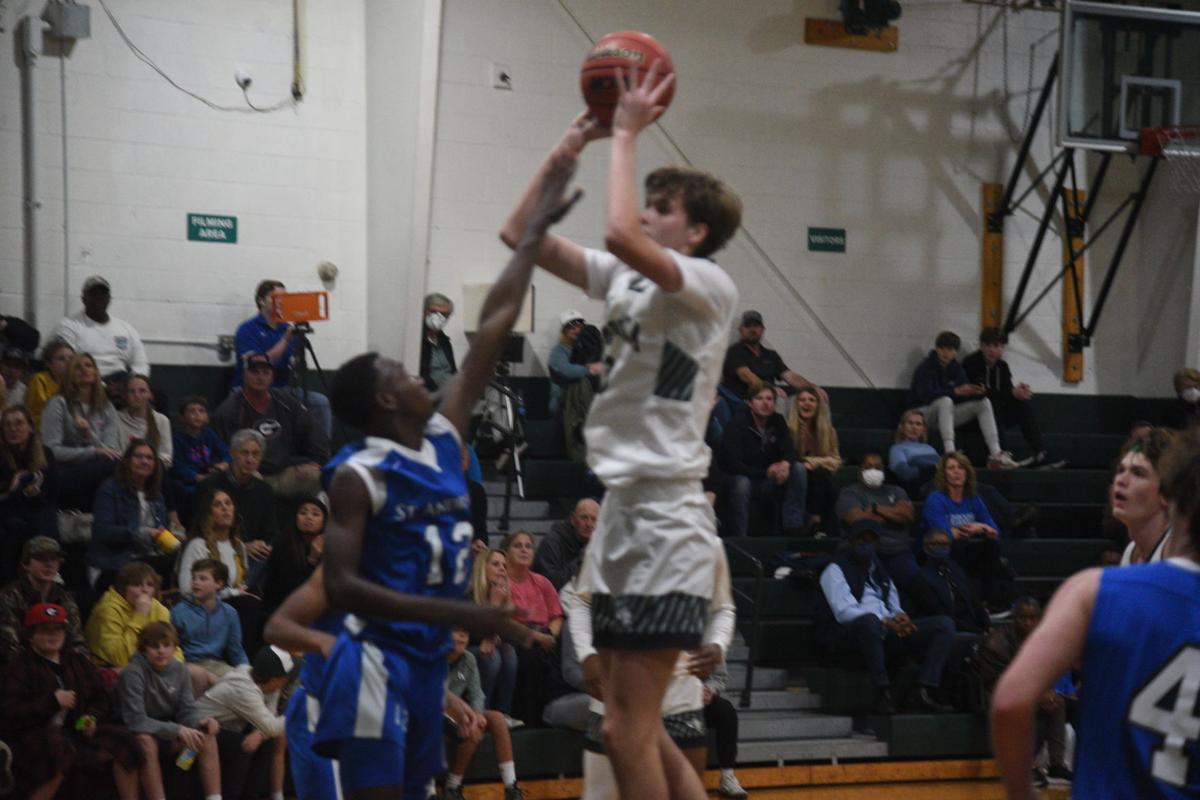 Frederica's William Jobe shoots over the outstretched Lions defender during the 62-50 loss. 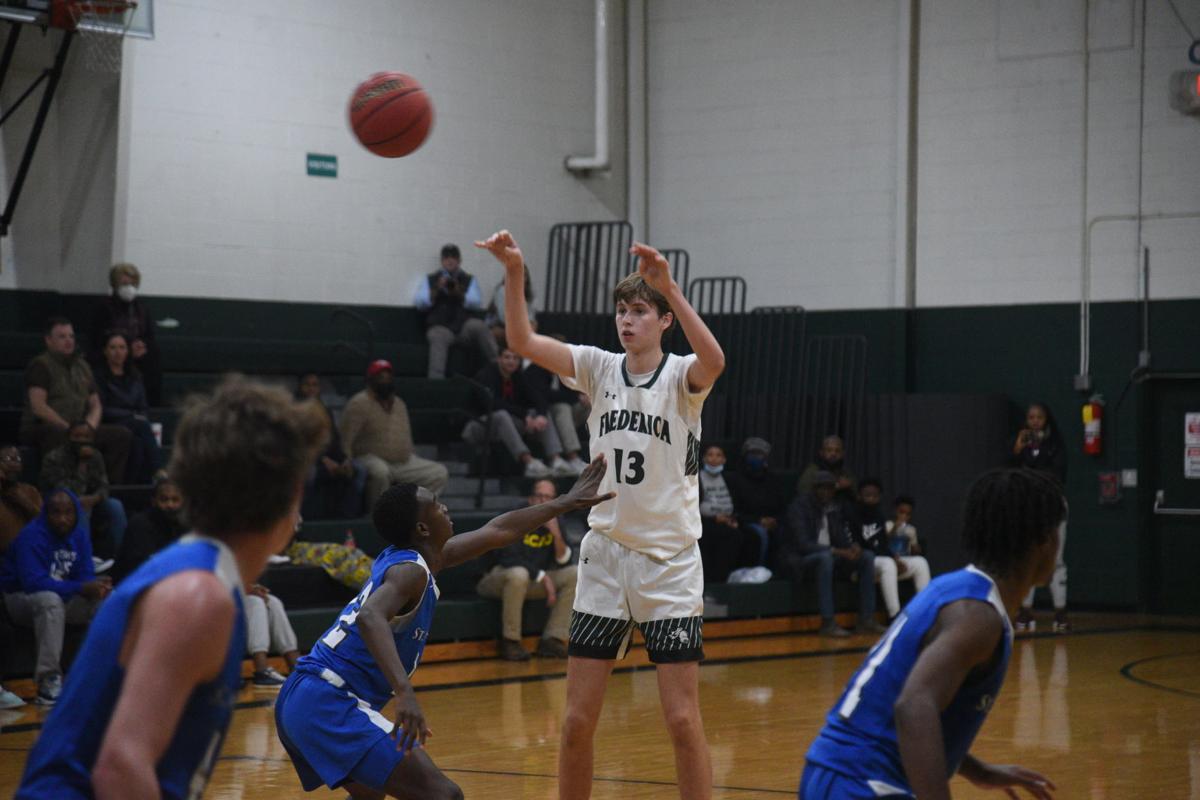 Frederica's offense tried to run through William Jobe and Vic Riden as much as possible in the loss to St. Andrew's. 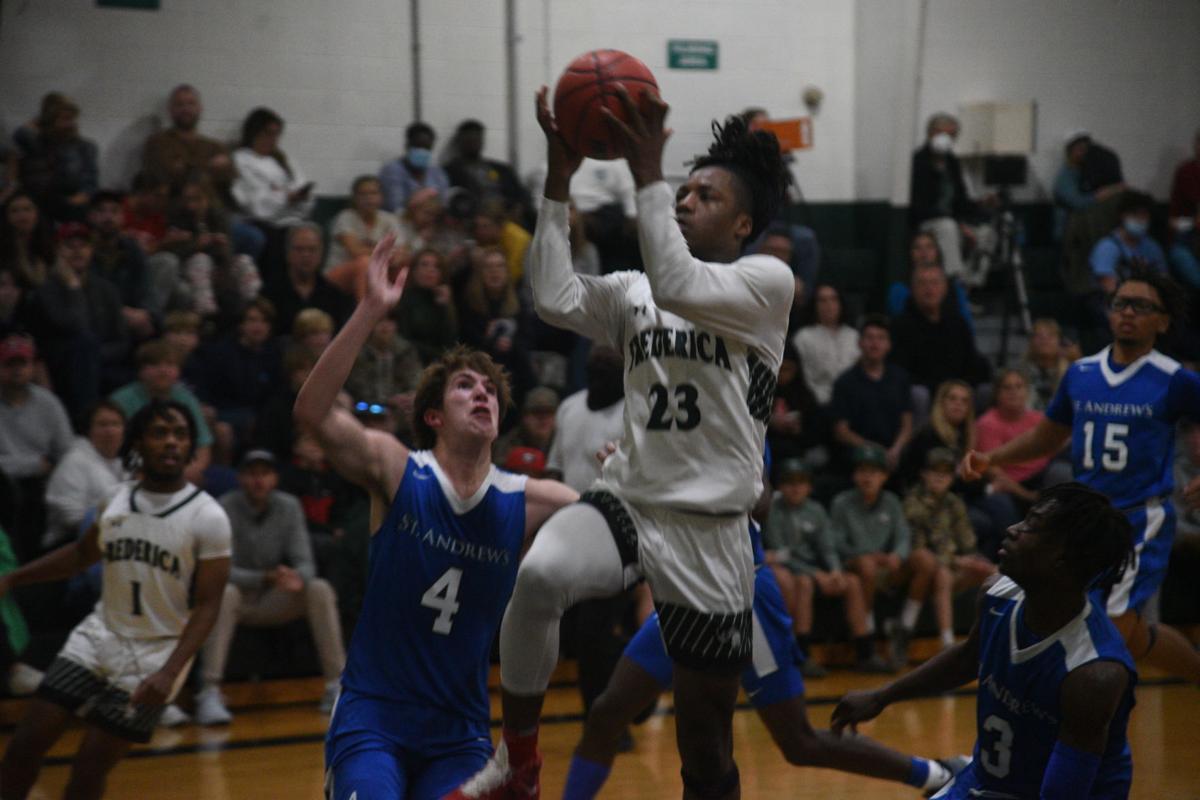 Frederica's Xavier Preston goes up for the contested layup against St. Andrew's. Preston scored six points off the bench in the game.

Frederica’s William Jobe deals with a double team during the teams game against St. Andrews.

St. Andrews's Kaleb Lofton goes up for the scoop layup as Frederica's William Jobe attempts to take a charge.

Frederica's William Jobe shoots over the outstretched Lions defender during the 62-50 loss.

Frederica's offense tried to run through William Jobe and Vic Riden as much as possible in the loss to St. Andrew's.

Frederica's Xavier Preston goes up for the contested layup against St. Andrew's. Preston scored six points off the bench in the game.

The Frederica Academy Knights struggled to hold onto the basketball in their 62-50 loss to St. Andrews on Friday.

On the defensive side of the court, the team ran a 3-2 zone to stop the penetration of St. Andrew’s ball handlers for as long as possible.

“We did ok in that 3-2 zone at first,” Frederica Academy head coach Carl Nash said. “We were covering their shooters pretty well. Then they started getting some penetration and some passes inside the zone. It’s very easy to do that against a 3-2 and that’s why we had to come out of it.”

Being up 18-17 after one quarter, Frederica quickly found themselves trailing.

The Lions (11-3, 1-0) opened the first three minutes of the second quarter on a 7-0 run before Nash called a timeout to get his team back into gear.

Unable to find a way to beat St. Andrew’s full court press, Frederica turned the ball over 18 times over the course of the game, gifting the Lions with easy baskets on the other end.

“We will get better,” Nash said. “Games like this help us and it actually gives you an opportunity to see what you need to do to work on against a quality team. I’m not down on our team for losing the game for as much as the way we did it, with the turnovers. The other thing is we made an emphasis on second shots. (St. Andrews) got a lot of second shots and their efficiency on second shots is almost close to 70 percent. When they get it, they can kick it out and shoot.”

Being down 33-24 at the half, the Knights scrapped their 3-2 zone defense and moved to a man defense. Nash pointed out that the Lions guards were able to find the middle man at the top of the elbow and either penetrate and kick or go to the basket.

Coming out of the locker rooms, Frederica continued its woes of controlling the basketball and giving away easy baskets.

With the team being outscored 21-11 in the third, the half-time adjustments didn’t work out for the Knights.

Being down 54-35 entering the fourth quarter, the Knights used off ball screens against the Lions zone to give their shooters space to knock down 3-point shots as they tried to bring the team back into the game.

As a Knights player would score on one end, the Lions would turn to the hot hand of Zyere Edwards. Edwards shot the ball well, scoring a game high 28 points and gave his team the confidence to come to St. Simons Island and beat Frederica.

If it wasn’t Edwards scoring, it was the second chance points that carried the Lions to the victory, scoring over 12 points and gaining valuable possessions to stop the Knights from coming back.

“They take advantage of your mistakes and that’s the kind of team they are,” Nash said of the Lions team and how efficient they are. “They do a really good job of taking your mistakes and converting them into points. I try to tell our team this all the time, turnovers and bad shots always lead to easy baskets for the other team.”

Returning to the court after being sidelined with a non-COVID illness, Jobe led the team with 18 points, grabbed five rebounds and blocked two shots in the game.

The two accounted for over 60 percent of the team’s scoring but Nash pointed out that the constant perimeter pressure by the Lions made it hard for the guards to give the two big men the ball.

“We had trouble getting the ball to them,” Nash said. “Their perimeter pressure was so much that we have to be able to be skilled enough and strong enough to make those passes to those bigs. If we can’t do that, then we are wasting our time (of getting the ball to Jobe and Riden).”

Frederica will look to snap their two game losing streak and win their first region game of the season when they take on Trinity Christian (9-2, 2-0) on Tuesday.

“I think we have to be a better defensive team obviously, especially on our man defense,” Nash said about changes going into Tuesday’s game. “I think that we have to attack. I got to get our players to understand how we attack offensively in the half court- If we can maintain our turnovers and be able to limit them to one shot then we will be fine and that’s what we have to do.”

Note: The Frederica Academy Lady Knights basketball game against St. Andrews did not occur tonight due to a Covid-19 concern within the Lady Lions team