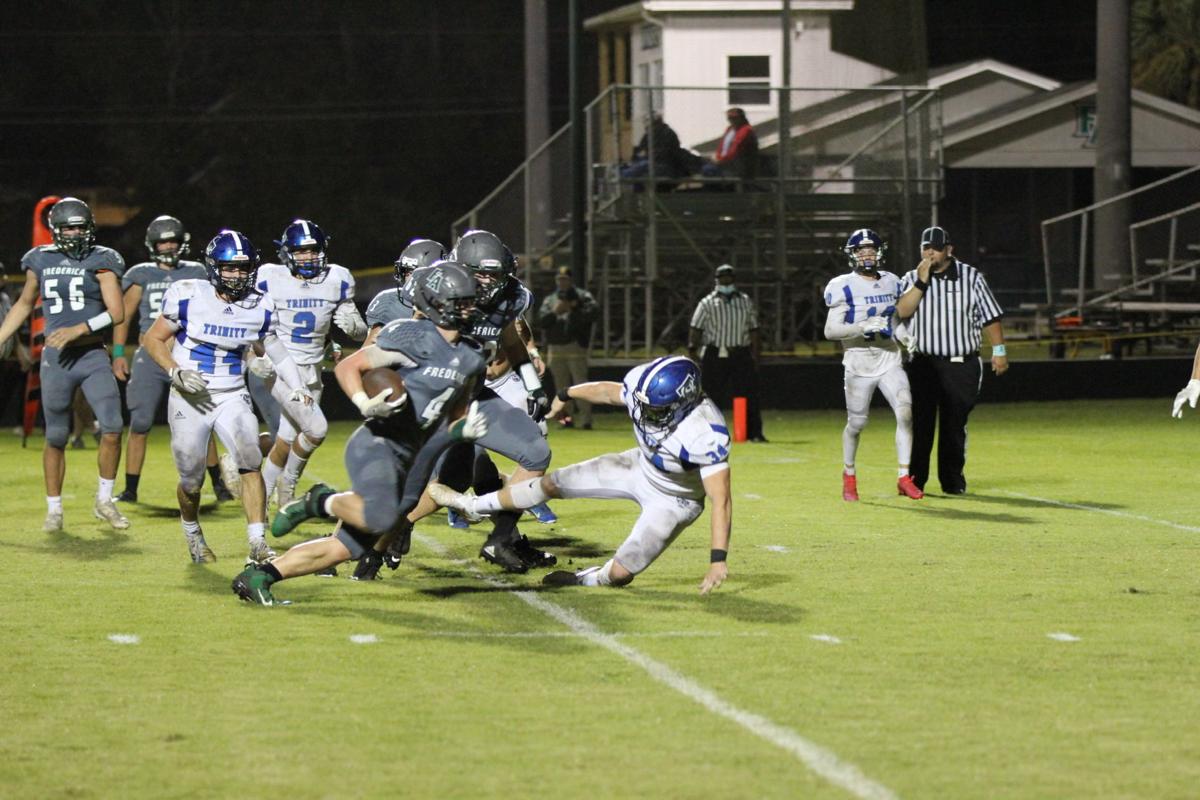 Frederica Academy’s Jordan Triplett runs into the end zone to score a touchdown against Trinity Christian on Friday night. 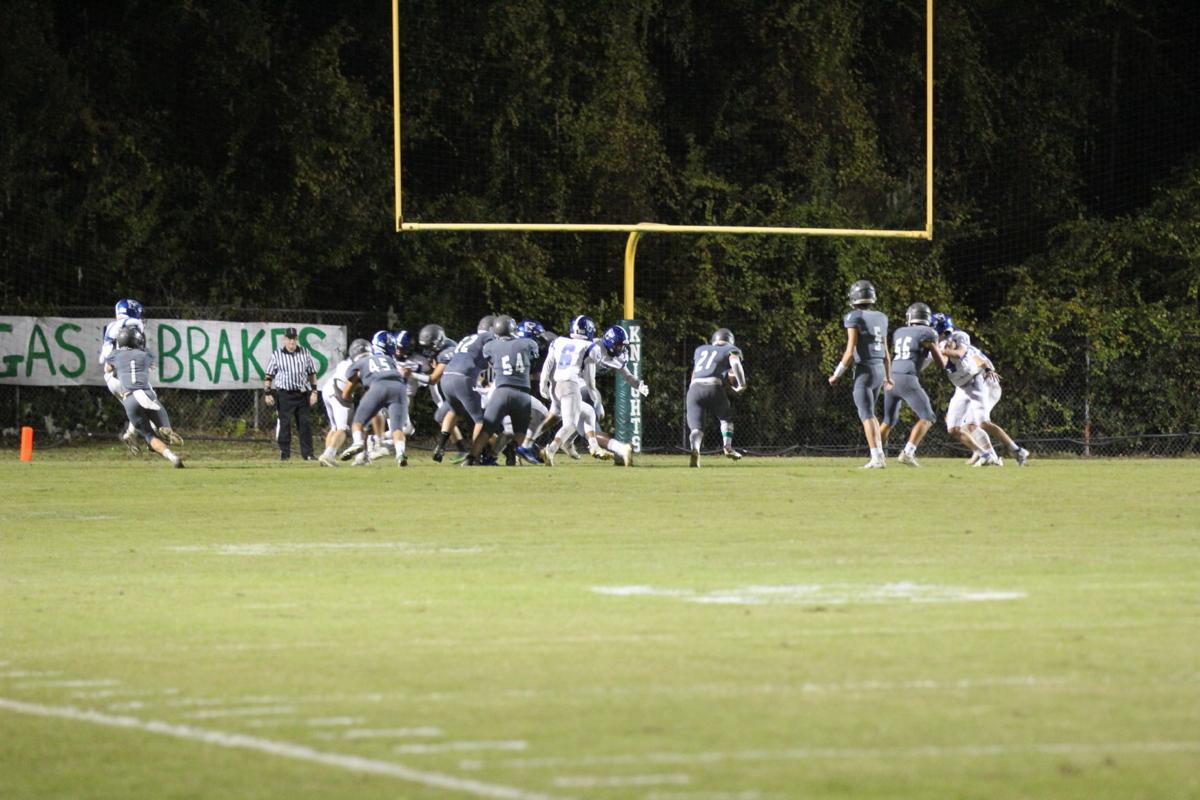 Kyle Perez runs through a wide open hole to score a touchdown on Friday night against Trinity Christian.

Frederica Academy’s Jordan Triplett runs into the end zone to score a touchdown against Trinity Christian on Friday night.

Kyle Perez runs through a wide open hole to score a touchdown on Friday night against Trinity Christian.

Frederica Academy’s football team finished the regular season with a strong 62-7 victory over Trinity Christian at home for senior night.

The Knights rush attack was unstoppable on Friday night as they amassed 377 yards on the ground and scored nine touchdowns from five different players.

Trinity Christian opened up the game by returning the opening kickoff for a touchdown but had very little success the rest of the game.

Frederica Academy coach Brandon Derrick said he felt like they started slow, but once they found their rhythm, it was go-time.

“I see that with us a lot of times, we settle down, and we get in our groove — we go play, and we execute,” Derrick said. “The first series or so we’re trying to find out where everybody’s at — the O-line kind of gets a fit.

“Once they get fit — tonight, Kyle had a good night. We were able to find grooves and make some plays. I thought the kids did a good job in the second half taking over the game, and I thought our young guys played well not to get up any points.”

For the fifth game of the season, the Knights defense held a team to seven or fewer points, and this game wasn’t the defense but the special team’s unit that gave up the points.

“Our defense not giving up a ton of points keeps us in games — it gives us a chance to play, and it’s been very effective,” Derrick said. “I think it’s a special group — seniors do a good job. They play hard, and they do a really good job for us.”

After the Crusaders went up 7-0, the Knights marched right down the field, and senior Kyle Perez ran it in from four yards out for his first touchdown run of the game.

The Knights missed the extra point and trailed 7-6 with 8:28 to go in the first quarter. After a defensive stop, Frederica took over and, after a big pass interference penalty on the Crusaders, found the end zone again. It was Jordan Triplett this time for a nine-yard touchdown run, his first of four on the game. The Knights went for two, got it and took a 14-7 lead with 3:18 to go in the first quarter and never looked back or struggled to score the remainder of the game.

Right before halftime, the Knights found themselves on their heels as Trinity got a big pass completion. However, they refused to let the Crusaders into the end zone. Frederica stopped the run three straight plays, and luckily the wideout dropped the pass on fourth down.

“I thought those guys did a really good job right before the half not to give up any big plays and or not give up score right there,” Derrick said. “They dropped it, but they did stuff the run down there three plays in a row, so we’re pretty tough.”

Triplett was one of five guys who scored rushing touchdowns on Friday night for the Knights. He led the team with 216 yards on 16 carries and four scores as he averaged 13.5 yards a carry.

“We can run the ball — we’ve done a really good job running the ball,” Derrick said. “We can put people in, and they’re — we rely on our O-line. They do a good job. They get a fit and a feel, and we plug people in — Jordan, Kyle, Amauri and Hamp all ran the ball good tonight. We can run the ball when we want to in between the tackles and outside when we need to. It’s become something we can lean on and execute.”

Perez made his return after missing most of the season due to injury. He had eight carries for 35 yards and two touchdowns in the first half.

Derrick said it was great to have another weapon in the backfield for the Knight’s offense to utilize.

“We just had to run him in and see how he could do,” Derrick said. “I thought it was a huge asset for us to have another weapon in there. He did a great job tonight, and hopefully, he’ll come back with a little bit more in his step next week and feel a little bit better.”

Now the Knights will have to wait for the playoff announcement today around 3 p.m. to find out their seeding and who they’ll be playing next Friday night. Pinewood defeated Bulloch Academy on Friday night as well, so that could help the Knights.