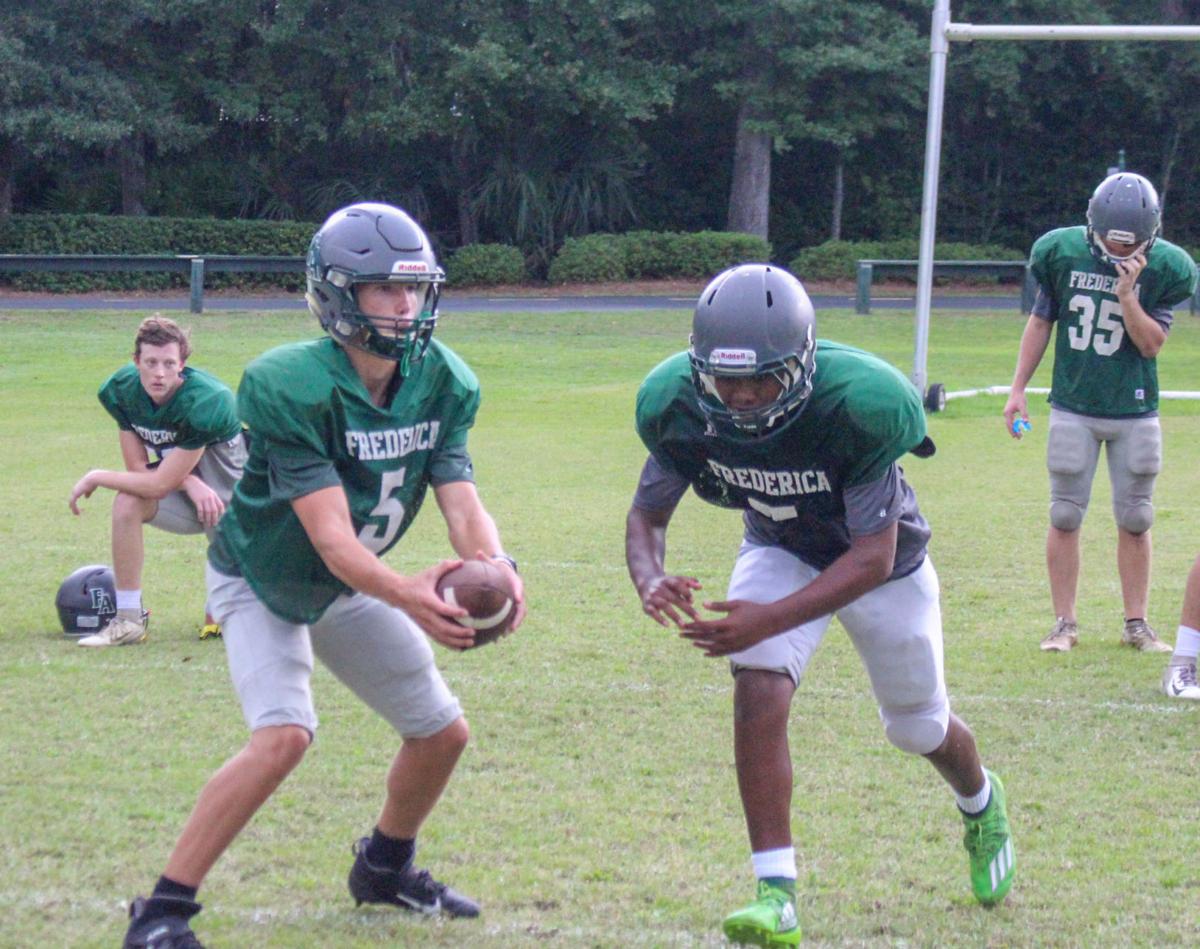 Thomas Veal, left, hands the ball off to Amauri Mountain,right, during practice. 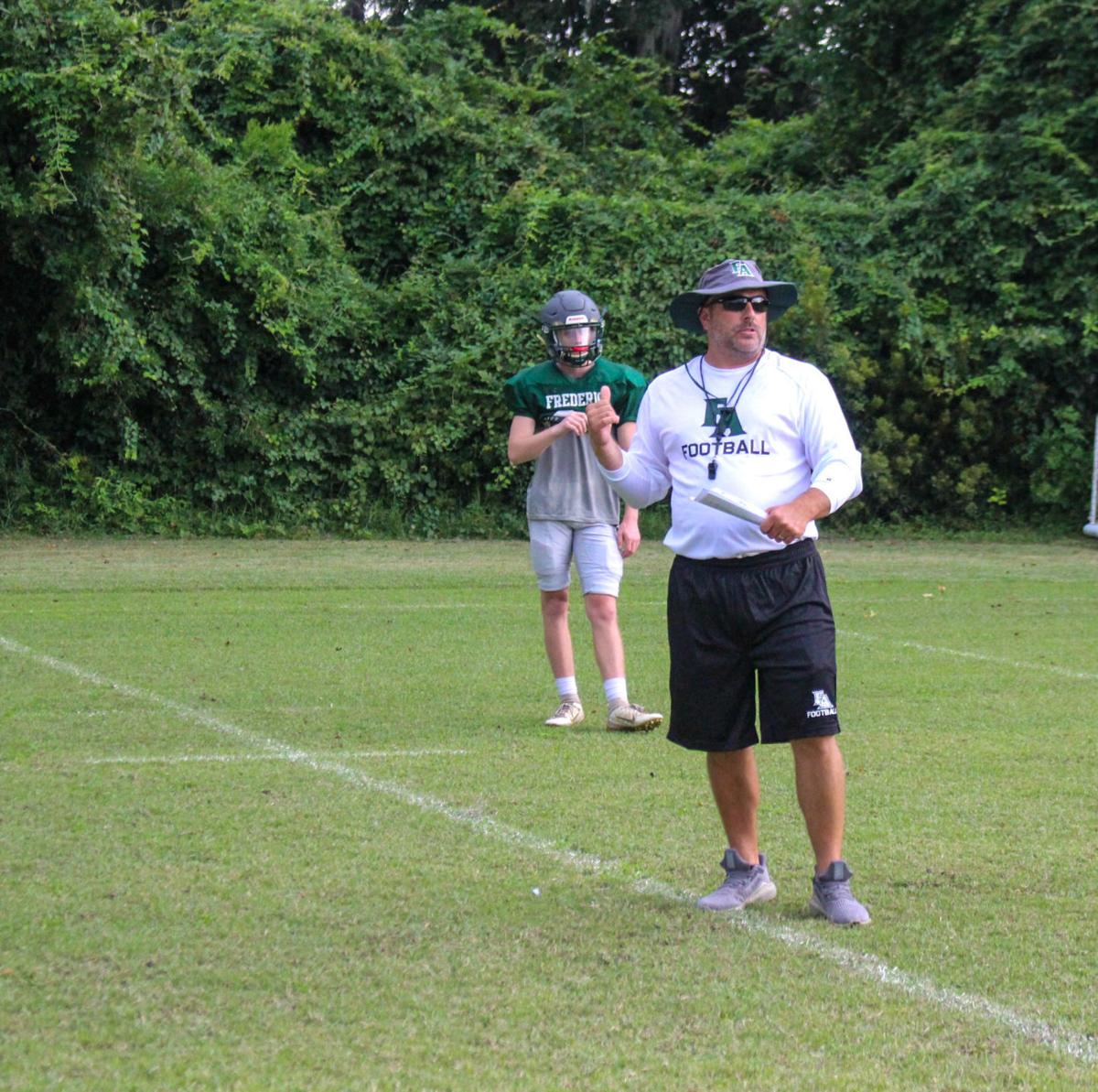 Frederica Academy head coach Brandon Derrick instructs the team on what to do during a specific play at practice. 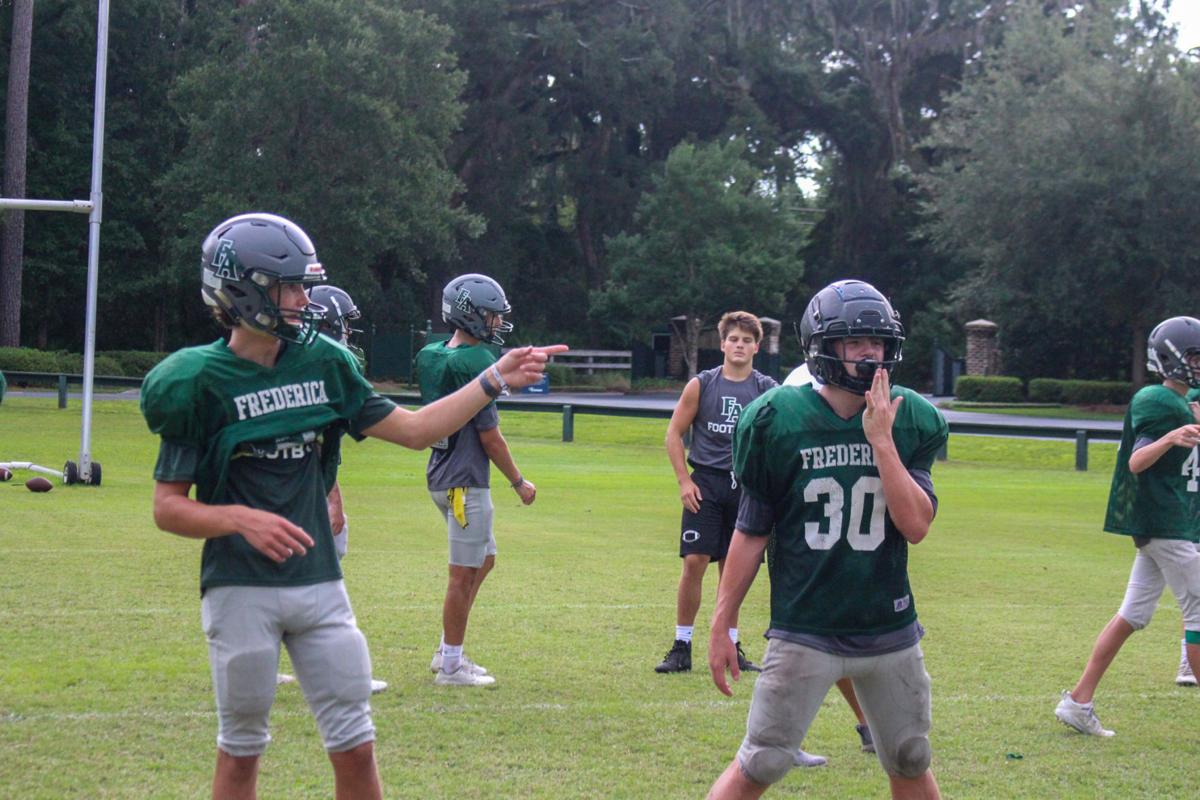 Thomas Veal, left, hands the ball off to Amauri Mountain,right, during practice.

Frederica Academy head coach Brandon Derrick instructs the team on what to do during a specific play at practice.

After having Week 1 off, the Frederica Academy football team will hit the road to open their season as the Knights take on Valwood at Goddard Field tonight at 7:30 p.m.

Frederica had to shut down practice through Sept. 7 after having a football player test positive for COVID-19. The Knights got back to work on Monday, and coach Brandon Derrick said it felt good to practice again; But this week will be a challenge as they take on the No. 2 team in the GISA Class 3A division.

“I think the kids have come out here pretty good,” Derrick said. “They’re out here trying to fly around and get it in. I’m glad to be back on the field, and we’re excited to play against somebody besides ourselves. We’ve only been able to have one real game-like scrimmage, so we got a lot of stuff to get good at here in a few days.”

The Valiants started their season last week with a big 51-8 victory over the Georgia Christian Generals.

Bay Moorman was one of the guys for the Valiants who scored against the Generals as he toted the rock for 59 yards and two touchdowns. Senior quarterback Pate Hogan also got into the end zone with a 30-yard run.

Derrick said the Valiants are strong up front on both sides of the ball, so it’ll be crucial for the Knights to keep guys fresh. Even though Valwood only has about seven more kids, that number can matter down the stretch.

“Probably going to be a little rusty Friday night. Like I told them, we just have to hold our ground and keep it zero to zero after one, and then I think I feel pretty good about it,” Derrick said. “They’ve got I think, 38 kids, we got 31, and somebody said, ‘Well, coach, that isn’t a big difference,’ but it is football wise — when you can rotate people. We’re going to have to do a good job of rotating as a coaching staff to make sure we keep everybody fresh.”

Valwood’s defense came up in a big way as they collected six sacks and forced three fumbles. Derrick said it’s going to be a good matchup, and whoever turns it over less will likely be the winner.

“They’re very physical on defense — they fly the ball. It’s going to be a really good game,” Derrick said. “If we don’t turn the ball over, we got a good chance of being in the game.”

For the Knights to win, Derrick said his guys will have to make sure the offense wins some battles up front. He said the quarterback has to be efficient as well. Thomas Veal missed most of last season due to injury, but has worked hard and earned the starting spot.

“We’re going to stay on blocks, and we’re going to make sure we’re doing our job assignment wise — every single time up front. We got to find all their blitzes, got to pick up their defensive line,” Derrick said. “We got to win some battles up front and on the perimeter — one on ones and makes some plays.

“We’re going to be efficient at quarterback, Thomas is going to be really good at times. We have to stay on those blocks up front — O-lines got to dictate this game.”

Even though the Knights have had to overcome some adversity this offseason especially the last couple of weeks, Derrick said regardless he expects to win.

“I don’t have any other expectation besides go in and win and be good on special teams. We’ve devoted a lot of time here in the last couple of days on special teams and take care of our business,” Derrick said. “My goal is to win every game — less expectations. I don’t care if they put us out all week, we’re going to try to find a way to get ready to go and win.”

The new roundabout at Demere Road and the East Beach Causeway got an addition Monday that won’t affect traffic flow, but it will enhance the driving experience.