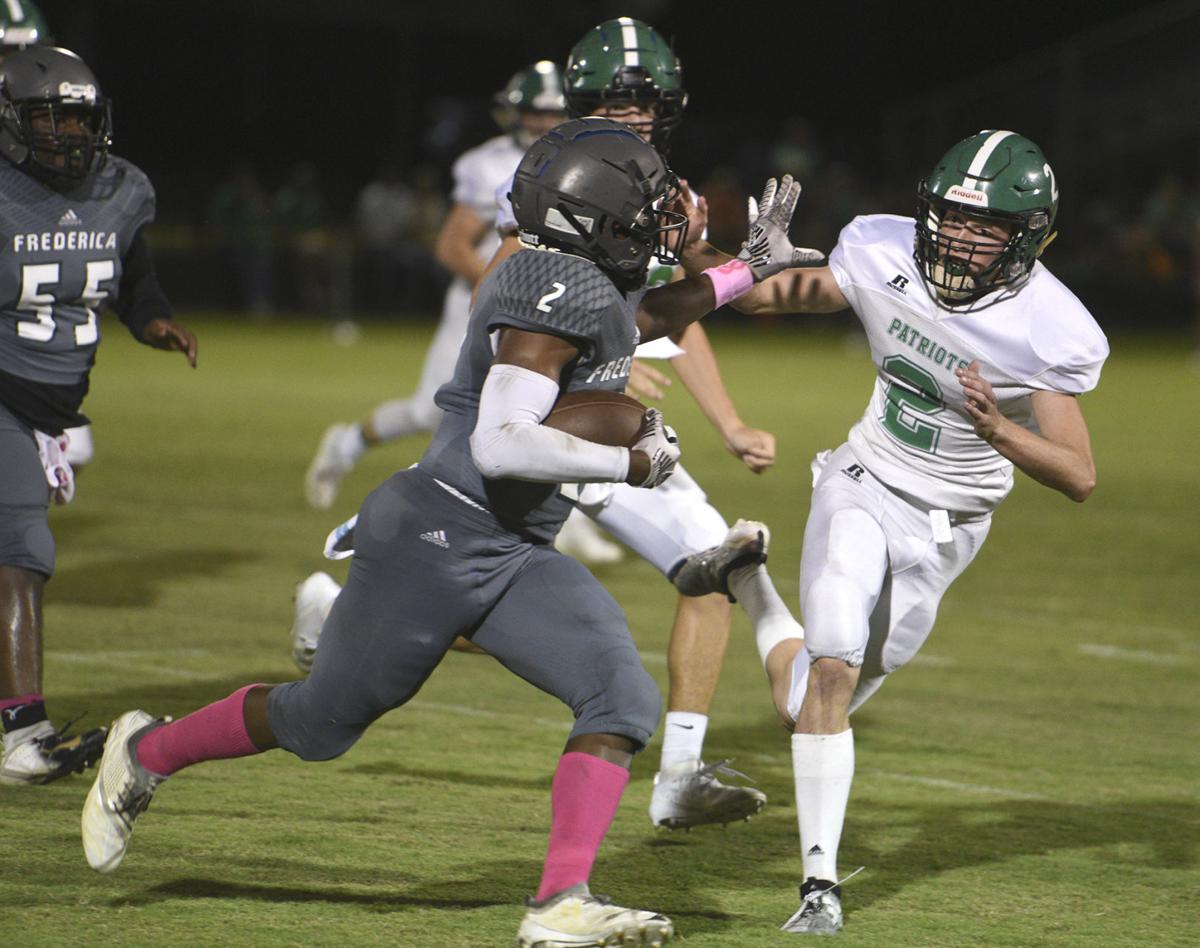 Frederica Academy’s Denver Anthony goes to stiff arm a Pinewood player during the game on Friday. 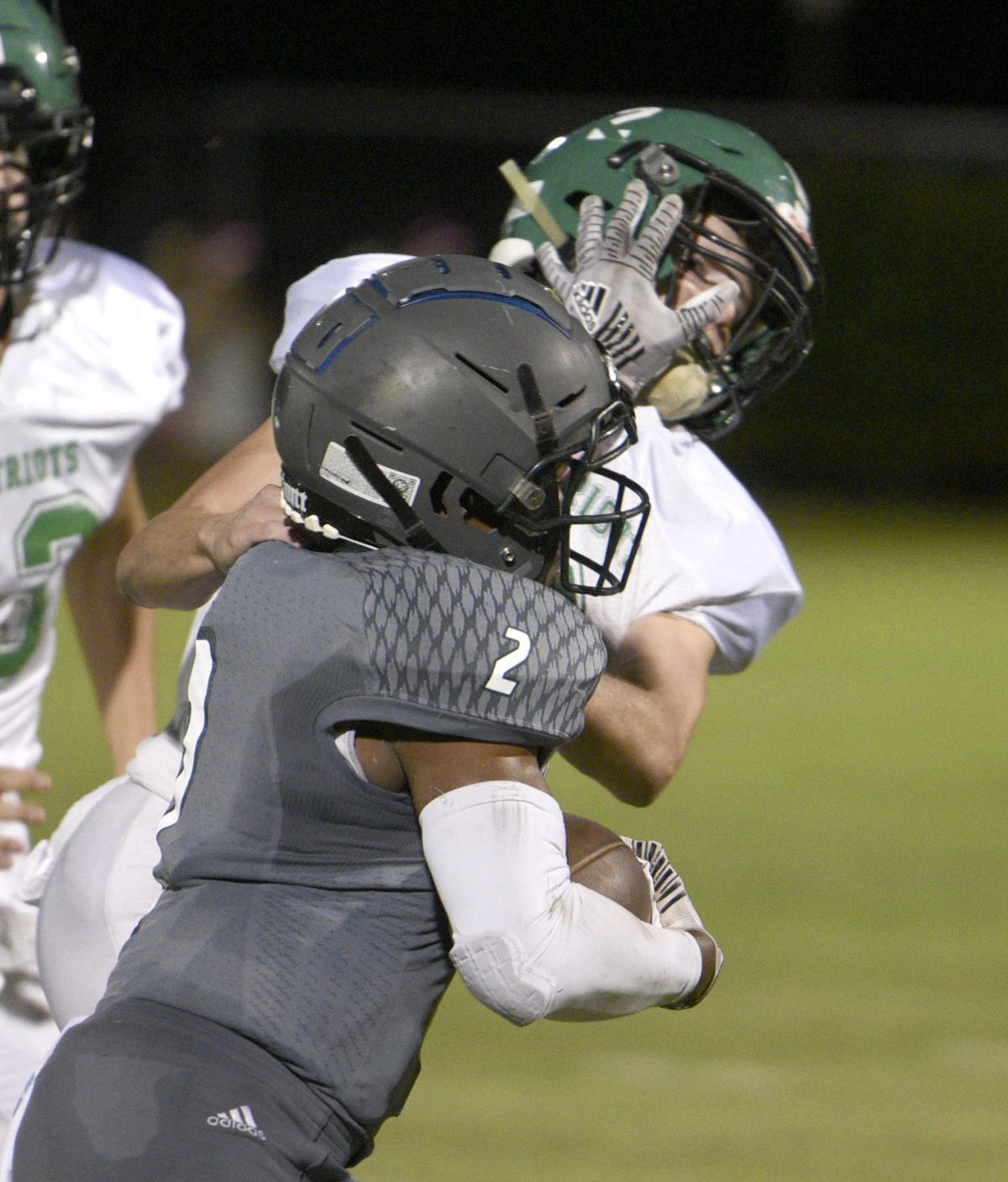 Frederica Academy's Denver Anthony during the game against Pinewood on Friday.

Frederica Academy’s Denver Anthony goes to stiff arm a Pinewood player during the game on Friday.

Frederica Academy's Denver Anthony during the game against Pinewood on Friday.

Frederica Academy was up 21-0 at half time against Pinewood, but due to an abundance of penalties, the inability to stop the Patriots quarterback, or their long ball resulted in a 30-28 loss.

The Knights played a tremendous first half against the Patriots with minimum penalties, and it looked like a well-oiled machine. After halftime, Frederica couldn’t find the momentum it had in the first half.

Frederica Academy’s coach Brandon Derrick gave credit to the Patriots and their effort. Derrick said that this was a game of attrition, and Pinewood wanted it more.

“They came to play in the second half,” Derrick said. “I mean we’re up 21-0 at the half, we have to go execute. We had two or three starters get hurt there in the first half, which is huge in our league. It was a game of attrition, and they wanted it a little bit more than we did in the second half.”

Pinewood’s starting quarterback Mic Wasson went into the half with 85 yards through the air and 49 rushing yards. Then he and Pinewood’s offense found their rhythm. Wasson finished 11-22 for 291 yards, two touchdowns, and two interceptions.

Of those 11 completed passes, five of them were for 24 yards or longer.

He was also the Patriots leading rusher as he had 15 carries for 101 yards and two rushing scores as well. The Knights defense had no answer for the sophomore quarterback. Wasson’s 12 carries in the second half orchestrated the comeback.

Derrick said that his team ran out of gas during the second half, and it didn’t help that a few starters went out and couldn’t play. However, he took full responsibility for the game.

“We didn’t do a very good job. I didn’t do a good job, so that’s all on me. That ain’t on the kids, it’s all on the coach. It’s my fault we lost, and I promise we’re going to get better in the next couple of weeks, it’s what we have to do,” Derrick said. “They played hard, and I thought our kids played hard, but we just kind of ran out of gas. Maybe that open week layoff hurt us a little bit. We haven’t played a full game in about three or four weeks, but we had our opportunities. We didn’t make it happen, and I think going forward, this will be a valuable lesson for us.”

Frederica opened the game with a march down the field, resulting in a two-yard touchdown from Denver Anthony, making it 7-0 with 7: 13 left in the first quarter.

Pinewood didn’t have an answer for the Knights throughout the first half and had the penalty problem. The Knights scored again after Jaiden Rose picked off Wasson, which set up Anthony for a 27-yard touchdown catch.

Frederica’s final score before half time came after two big Pinewood penalties that set up a 1st and 10 from the 15-yard line. Devlin called his number and ran it in for a two-yard making it 21-0 at the half.

Anthony had nine carries for 33 yards and a rushing touchdown. He also had five catches for 87 yards a touchdown catch. To put the icing on the cake, Anthony recorded an interception to avoid Pinewood scoring before half time.

“He’s a great football player,” Derrick said. “Denver plays both ways and has to play every snap. He gives us everything he’s got and goes out and practices hard every week and gets himself prepared. Right there at the end, we were going to try and put the ball in his hands to see if he could run it down the field.”

One of the Knight’s biggest issues on the night was penalties. In the second half alone, Frederica had four personal foul penalties and collected 10 in this half alone. While the Patriots made adjustments at half time and found the Knights weaknesses, Frederica didn’t help itself out.

Derrick said that his staff talks about silly penalties all the time with his kids. He said that it’s something they’re going to have to work on and get better about.

“You got to be disciplined, and you can’t lose your top,” Derrick said. “Some of its the discretion of the referees too. Our guy got called for one right there at the end. The ball popped up, and the guy picked it up and took off running. He thought he just had the ball, so he tried to tackle him, and they called him for souflexing a guy. That’s up to their discretion, and you get some and lose some. Our guys have to be a lot more disciplined. It’s stuff we’ve talked about already about not getting silly penalties, and we had a ton of those tonight. We got to fix it.”

Pinewood got back into the game due to the Knight’s mistakes and Wasson putting his team on his back. If he weren’t able to run the ball on Frederica’s defense, then the outcome would have been much different.

The Patriots came out extremely aggressive in the second half with a 42-yard catch on the first play of their opening drive. Frederica’s defense found a way to force fourth down, but Wasson and the offense had too much momentum as he tossed an 18-yard touchdown pass to Lake Dasher. This catch was his first of two touchdowns in the game.

Frederica quickly answered on its next drive when Kyle Perez took one 45 yards to the house on the first play making it 28-8.

Dasher finished with seven catches for 210 yards and two scores. He and Wasson were quite in sync, and it was like he caught everything thrown his way. Dasher scored again on a 97-yard pass to make it 28-16 with 4:02 left in the third quarter.

The Wasson handled the rest in the fourth quarter with a two-yard and one-yard touchdown runs, which made it 30-28 and the Knights one last shot.

Frederica attempted to score, but ran two running plays, a short pass and then another run and fell short.

Up next for the Knights travel to Perry to take on the Westfield School on Oct. 11 with kick off set for 7:30 p.m.