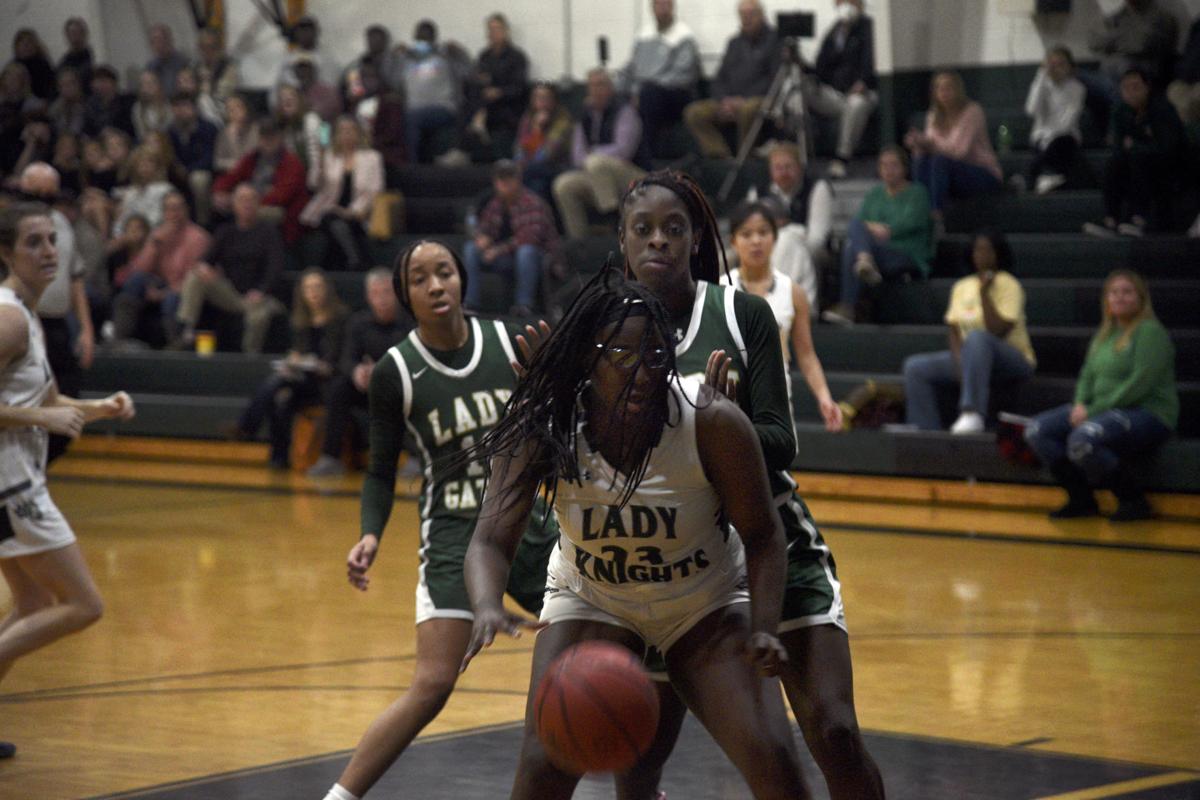 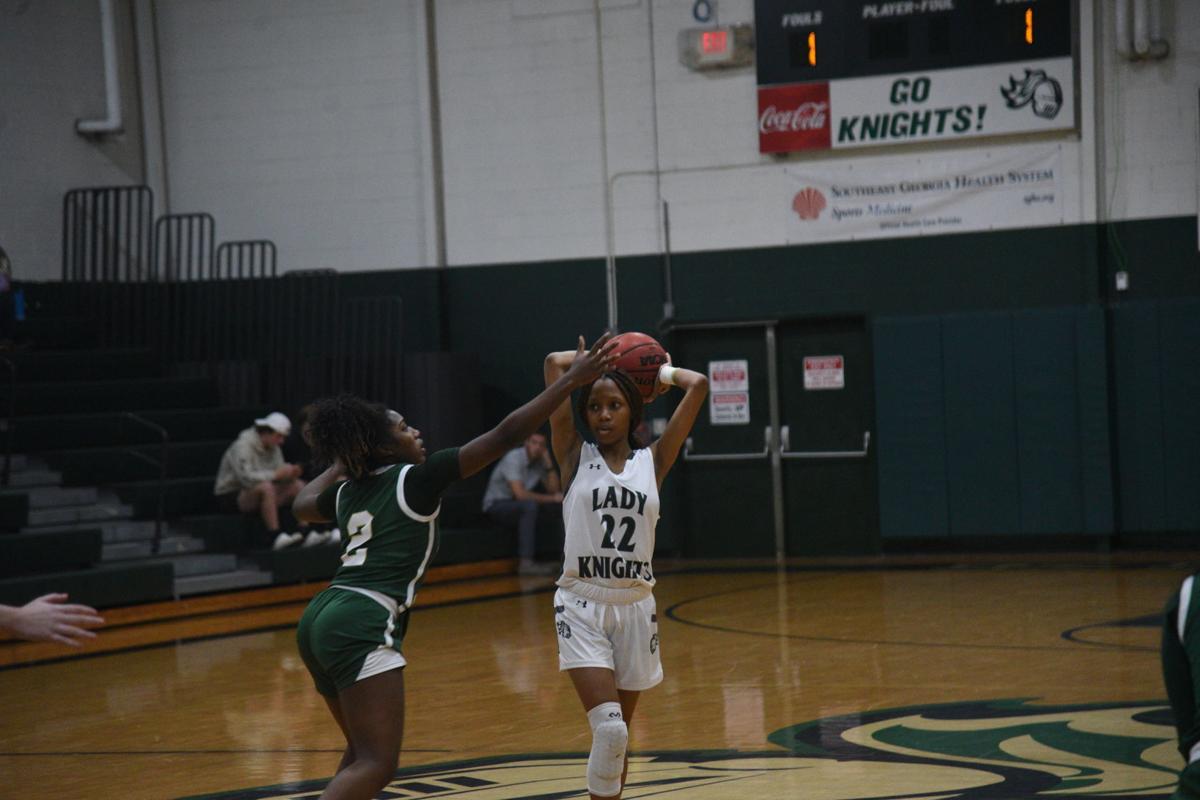 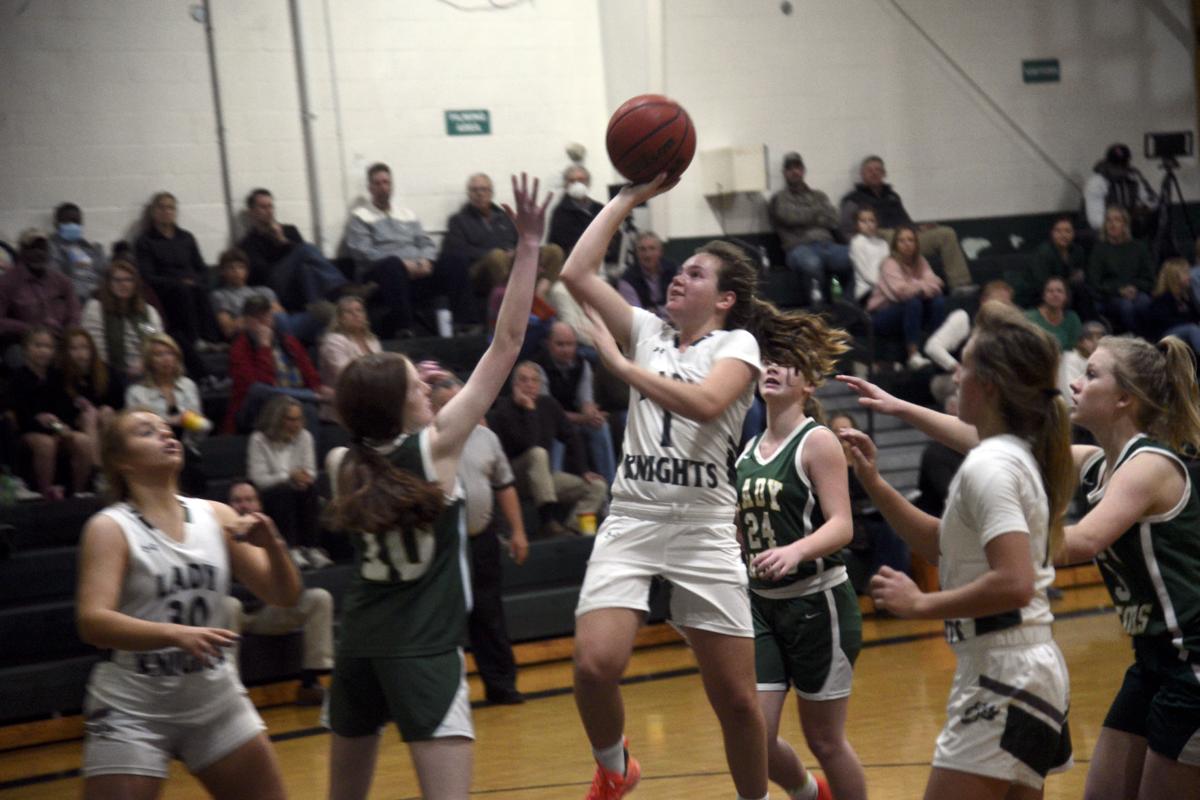 Frederica’s Margaret Gandy goes up for the floater against Bulloch, Friday. 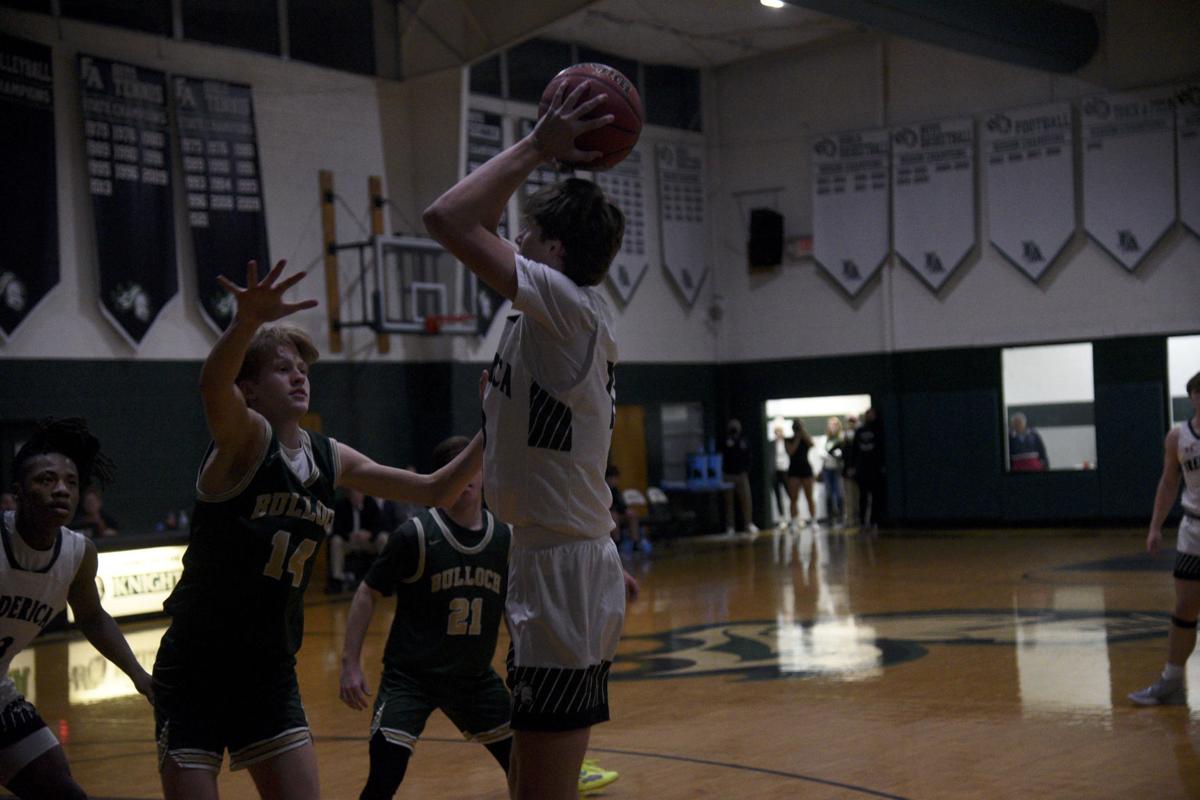 Frederica’s William Jobe shoots over the Bulloch defender in the teams 71-27 win. Jobe finished with a game high 29 points. 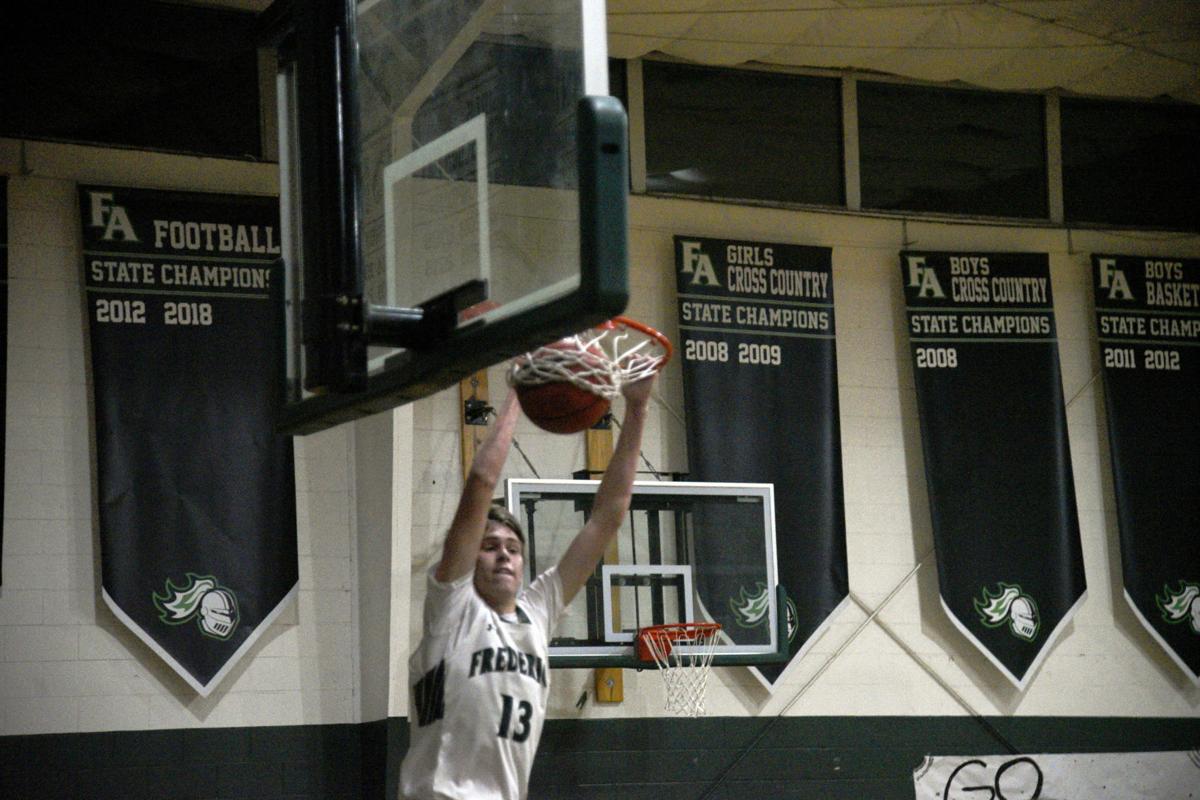 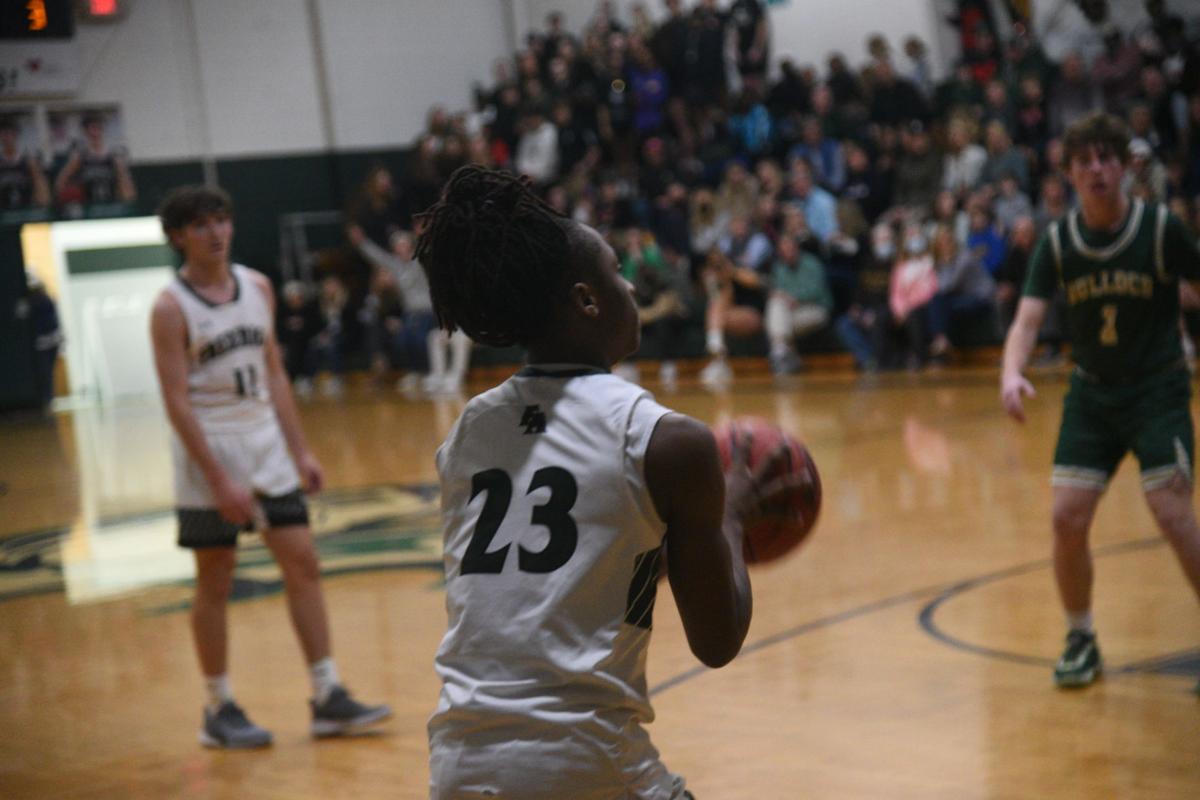 Frederica’s Xavier Preston shoots the corner three before the clock expires in the first quarter. 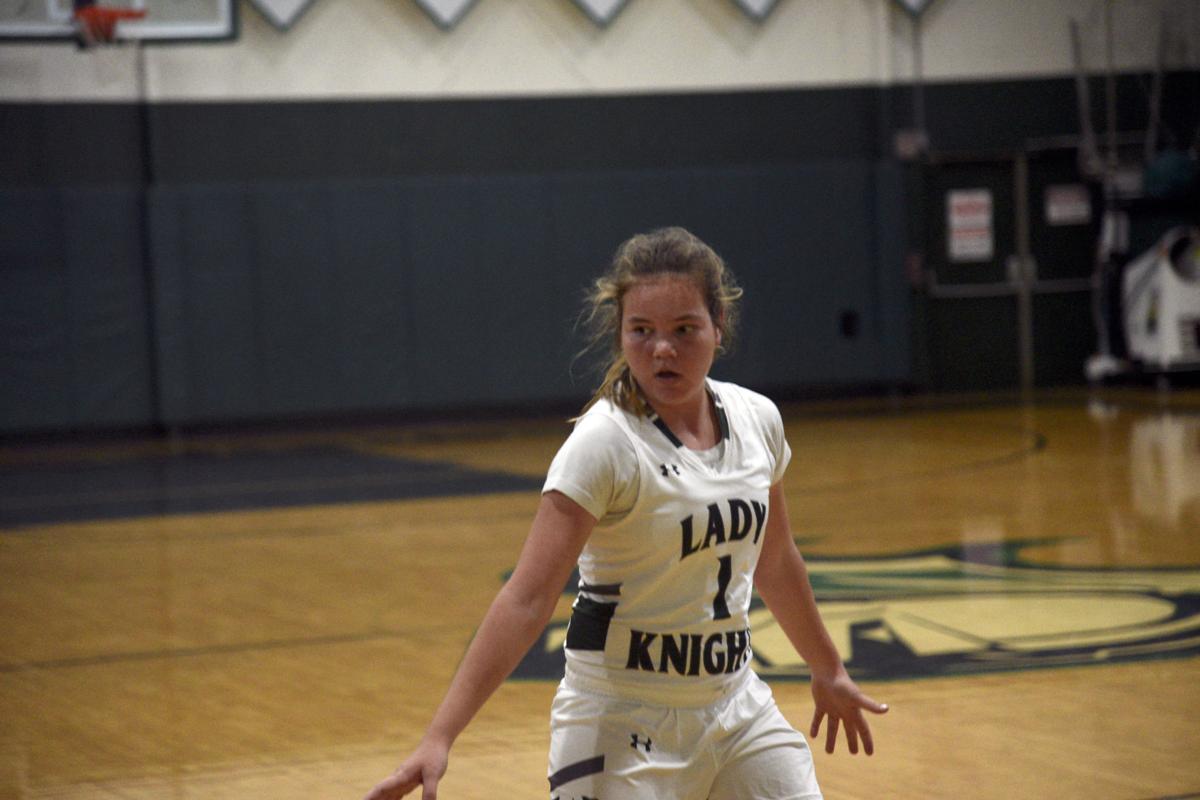 Frederica’s Margaret Gandy goes up for the floater against Bulloch, Friday.

Frederica’s William Jobe shoots over the Bulloch defender in the teams 71-27 win. Jobe finished with a game high 29 points.

Frederica’s Xavier Preston shoots the corner three before the clock expires in the first quarter.

The Frederica Academy boys basketball team (12-3, 2-2) returned to .500 in region play with an emphatic 71-27 home win against the Bulloch Academy Gators on Friday night.

Coming into the game, head coach Carl Nash wanted his team to set the tone early against a winless Bulloch team.

“I felt like we needed to press right away,” Nash said. “I don’t like doing that a lot of the time, but I felt like they were taking this team lightly and I didn’t like that at all. They’ve got a good coach and some young kids that can get hot on you. I decided to press and try and set the tone early.”

The Knights listened to their coach and jumped out of the gate on fire, scoring 24 points in the first quarter with William Jobe scoring 15 of his 29 points in the quarter. Jobe’s hot hand gave the Knights a 20-point lead against their rivals and had the crowd fully into the game.

The team would continue to sustain their lead over the Gators, scoring 21 points in the second to raise their total to 45 going into the break. Bulloch scored six points in the quarter to finally reach double digits, but the game was all but over from the opening tip.

Jobe continued his hot streak from the field as he tacked on 12 more points to bring his total to 27 first-half points. He also had five rebounds and three blocks in the half to dictate the game in all areas.

Coming out of the half, the Knights had a large lead but they started to let the Gators score easy baskets, much to the disliking of Nash.

“I wasn’t very happy when we came out of the locker room for the second half,” Nash said. “It’s hard to keep a team motivated when you are up 35, but I just don’t want my teams to come out lethargic like that, so I wasn’t very happy about that. Other than that we will take it as a good win at home and get ready for the next one.

Bulloch was able to score 11 points in the quarter, but the Knights kept pressure on the team and scored 23 points to push a 47-point lead into the final quarter.

The full-court pressure from Frederica was one of the main factors in the night, as the Knights forced 16 turnovers and contained their turnovers to four.

“We are not used to doing that,” Nash said of forcing 16 turnovers. “Our last two games all we’ve played is man. We haven’t played any zone, and I think it’s been really good. I’ve been happy with our man defense, it’s been really good and hopefully we will continue to do that.”

Jobe led the team in scoring with 29 points and finished with nine rebounds and three blocks on the night. Jordan Triplett scored 16 points, grabbed eight rebounds and dished out three assists. Vic Riden added 11 points and four rebounds off the bench.

With the Knights back at .500, the team will enter the second half of region play looking to avenge a bitter loss to Pinewood Christian, Jan. 21.

“I felt like we dropped one at Pinewood when we shouldn’t have,” Nash said about the second half of upcoming region play. “Losing that game by one, we didn’t play well until the last quarter. We were just too far behind. I wasn’t very happy about that and I think St. Andrew’s came in here and shell shocked us. For the most part I am very happy with our team. They come in everyday and work hard, they don’t complain, they know what they have to do. I really like this team and i hope they get an opportunity to play for a region championship. We’ve got a long way to go, so we will see what happens.”

The Frederica girls had been struggling in region play to start the season, dropping its first two games of the season.

The Lady Gators didn’t care about the struggles from the Lady Knights as they resorted to full-court press all night long.

In the first quarter, Frederica was able to use the duo of Margaret Gandy and Sophie Price to keep the team in the game, but the two of them were unable to maintain the pressure.

Unable to get anything going after the first quarter, the Lady Knights turned the ball over 36 times in the blowout loss.

Although the team was down 65-25 entering the fourth quarter, they were able to hold the Gators to two points in the final quarter.

Price led the team in scoring with 11 points, followed by Gandy’s seven points.

Frederica will look for its first region win of the season when they host Pinewood Christian on Jan. 21.