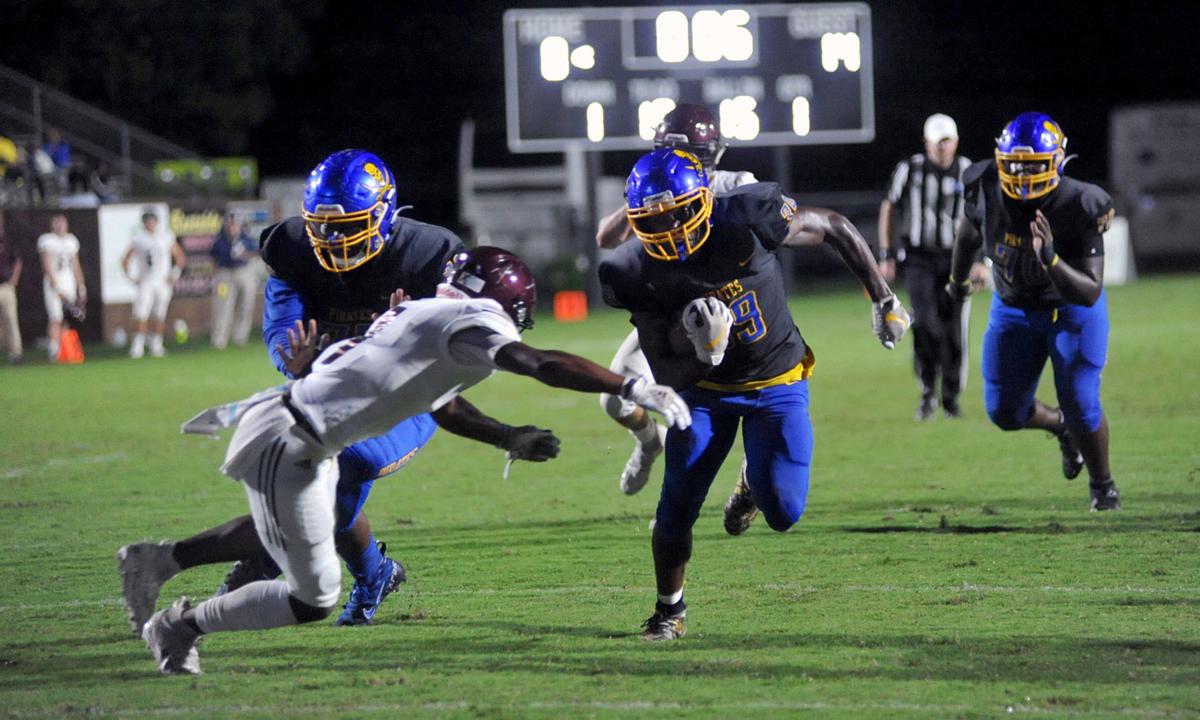 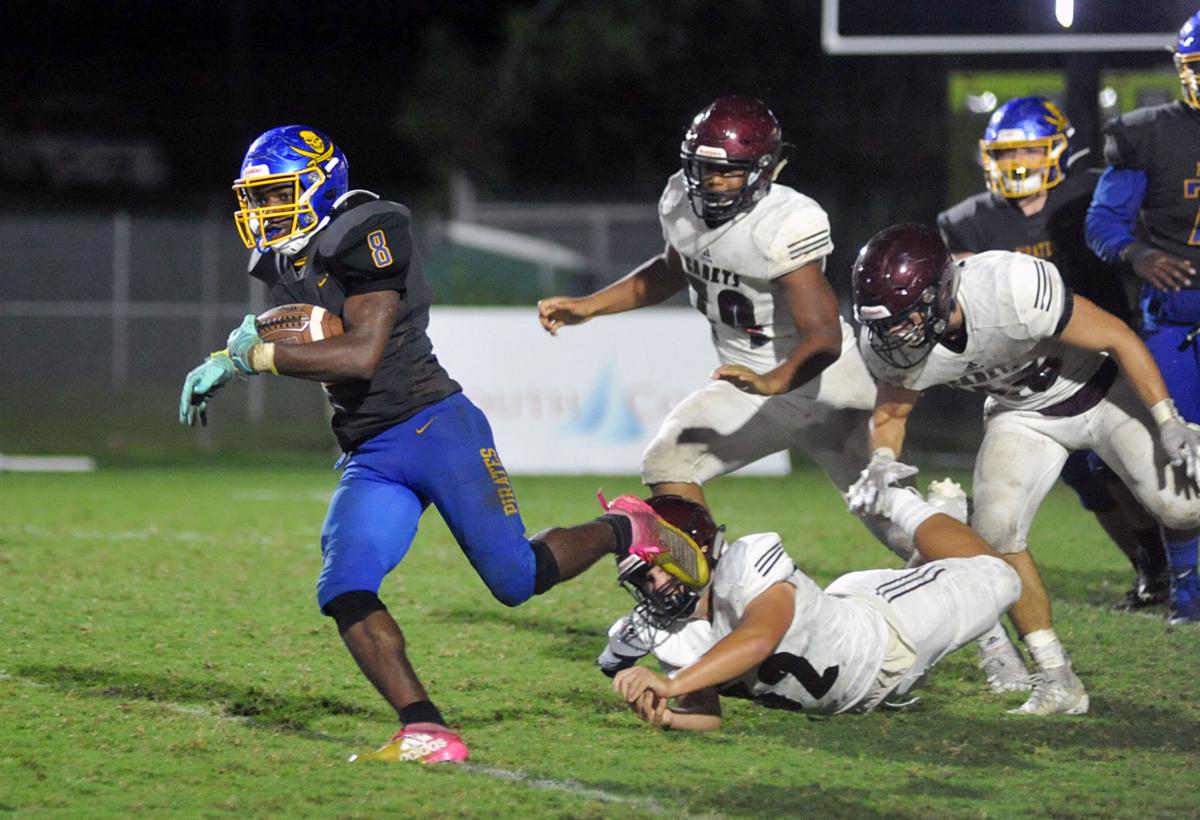 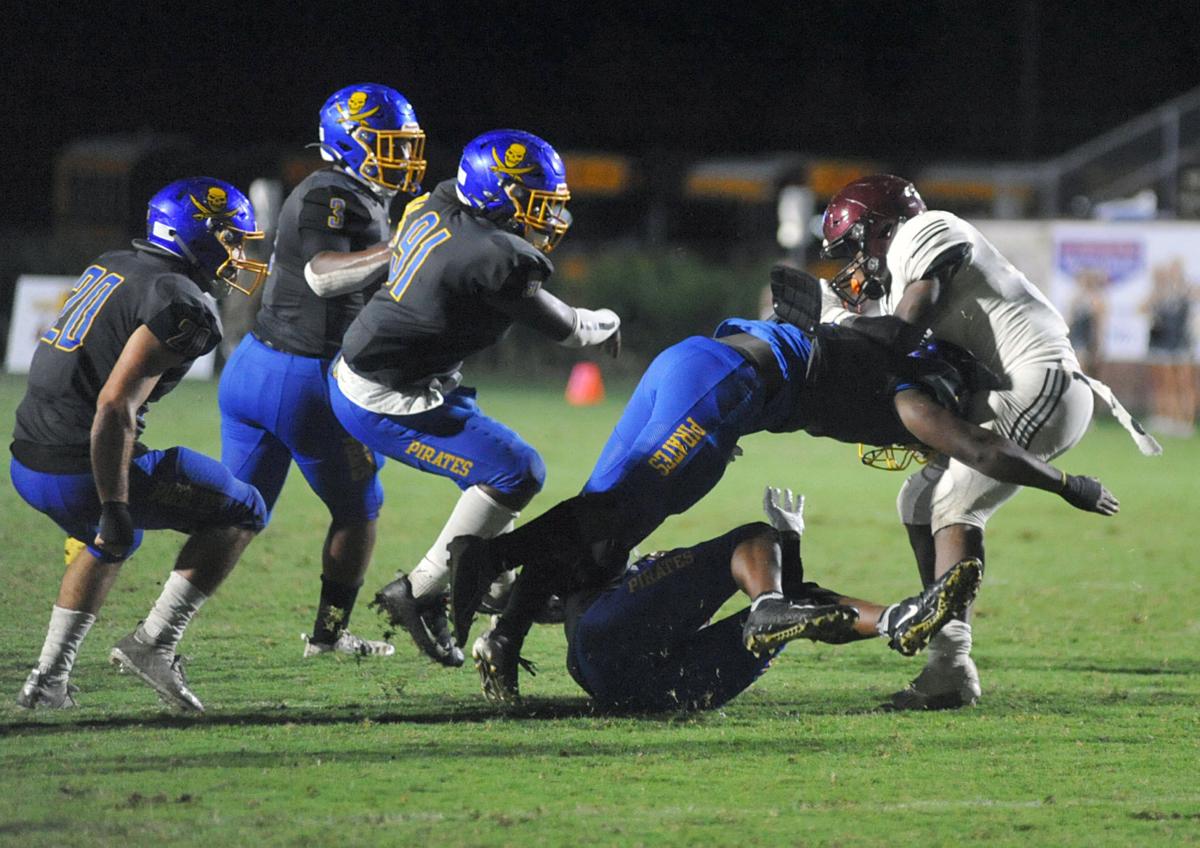 Benedictine beat Brunswick High, but both teams made their statements heard Friday at Glynn County Stadium.

The Pirates piled up 365 yards of offense, held the Cadets to 261 total yards, and were poised to deliver the go-ahead touchdown with fewer than five minutes remaining, but an untimely fumble ultimately sank Brunswick 21-16.

“I’m extremely proud of them,” BHS head coach Sean Pender said after the game. “I love this group of guys. We had an opportunity to win this, we started controlling it in the second half, and we played our hearts out. It’s just unfortunate mistakes.

Trailing 21-10 at halftime, Brunswick pitched a defensive shutout in the second half to give itself a chance to battle back against No. 3 Benedictine — a 4A program loaded with Division I talent on both sides of the ball.

The Cadets got the ball to open the third quarter, and they looked ready to put the game out of reach by marching 57 yards in eight plays until the ball popped free on the ninth play of the drive. Zane Rosenbaum scooped up the loose football to give the Pirates their second fumble recovery of the contest, and inject the home sideline with renewed confidence.

Despite the 11-point deficit, Brunswick controlled much of the action in the first half with its play along the line of scrimmage. Led by a pair of future D1 linemen in Caleb Cook and Kanaya Charlton, the Pirates’ offensive line pushed around the Cadets, allowing the team to rush for 169 yards over the first two quarters and finish the evening with 258 yards on the ground.

Benedictine took a 14-0 lead after just two possessions from each team, but Brunswick put together a nine-play touchdown drive on the ensuing drive, signaling it wasn’t about to go away quietly into the night.

A 42-yard pass from 247 Sports Composite three-star quarterback recruit Holden Geriner set up another Cadet touchdown early in the second quarter. But the Pirates answered with another long drive that ended with a 38-yard field goal, and suddenly Brunswick didn’t look like the 13-point underdog Maxwell Ratings projected coming into the game.

“At first, it looked like we were kind of timid, tippy-toeing a little bit, but then we calmed down, our nerves settled, and we knew we could play with them.”

Although Brunswick was unable to get much going after recovering the Benedictine fumble, it got the ball right back after forcing a three-and-out. The Pirates then proceeded to embark upon an 11-play, 78-yard drive that was capped by quarterback KJ Lee’s six-yard touchdown pass to Xavier Bean to narrow the deficit to just five points after a blocked extra point attempt.

Lee completed four of his five throws on the possession, twice converting on third down, including on the scoring pass. He’d finish 11-of-14 for 107 yards with a touchdown and an interception that was returned more than 50 yards to set up the Cadets’ first score in the opening quarter.

Following the Brunswick touchdown, Benedictine was again forced to punt the ball away after a false start on 4th and 1.

The Pirates took over at their own 6-yard line, and immediately got a 17-yard burst from junior running back Khamori Simmons, who finished the game with 186 rushing yards on 28 carries.

Alternating between Simmons and reserves Leon Charlton and Pat Leggett, who have stepped into a larger role in the absence of standout Chuckobe Hill, the Pirates were able to methodically make their way down the field. When Lee hit Tyrease Jones for a 17-yard gain that had Brunswick knocking on the door to the red zone, the upset appeared imminent.

A five-yard gain by Charlton set the Pirates up with 2nd and 5 from the 16-yard line, but on the ensuing play, Lee dropped the snap and failed to ever fully corral it.

The Cadets jumped on the loose ball to take over up five with just under five minutes remaining, and they were able to run out the clock.

Benedictine improves to 3-0 on the young season with the win; the second coming against a team out of Region 2-6A. Brunswick falls to 1-2 with losses to a pair of top 10 teams.

“It was a good night of football,” Pender said. “We just fell short.”