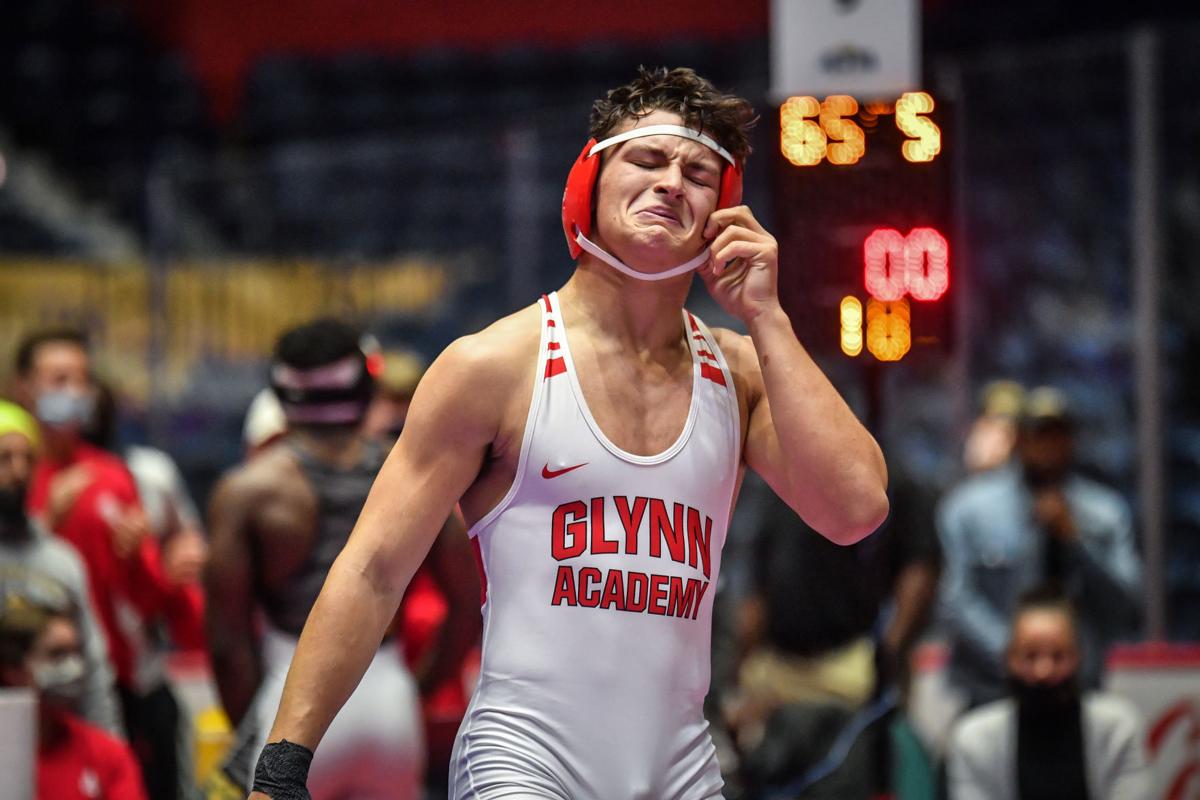 Jackson Wakeland gets emotional after realizing he won the 182-pound state title.

Jackson Wakeland celebrates winning the 182-pound title at the GHSA 6A State Tournament. 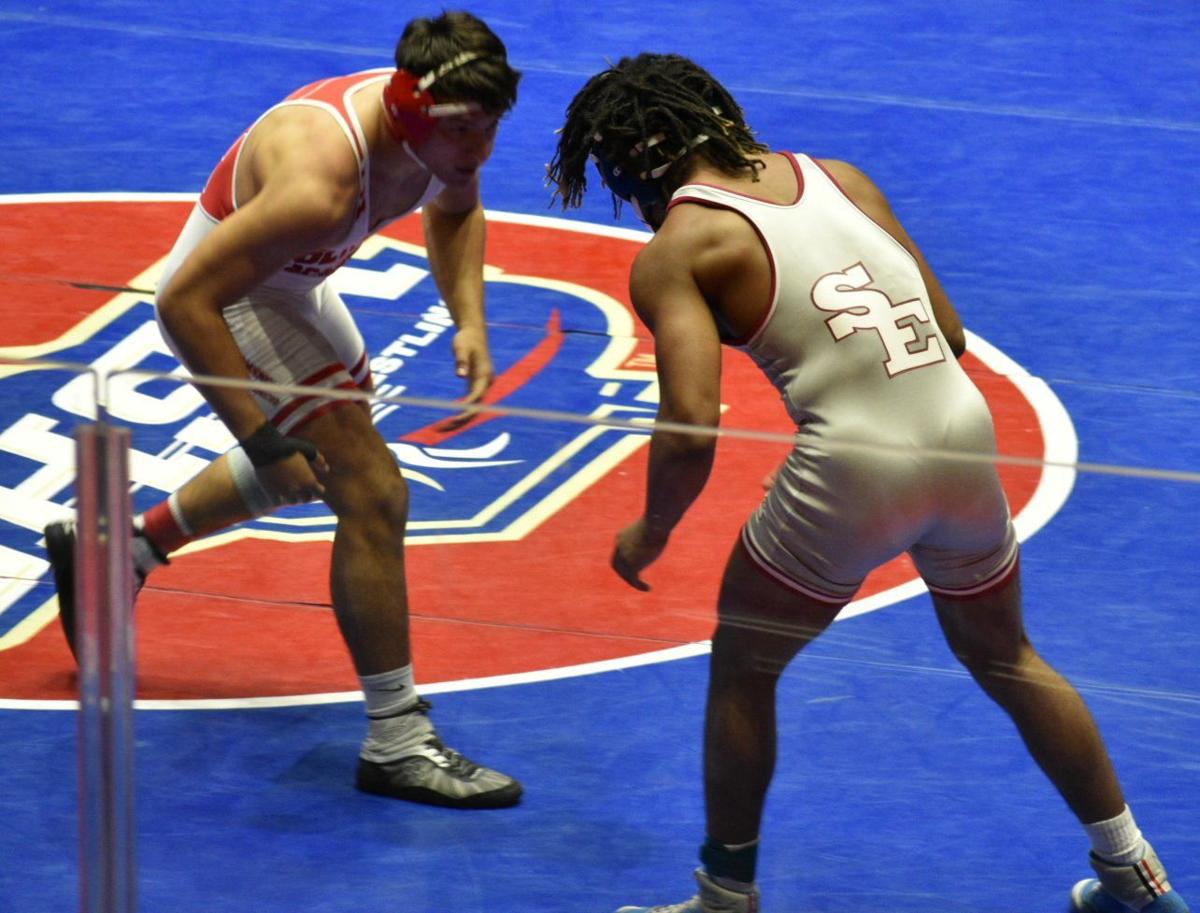 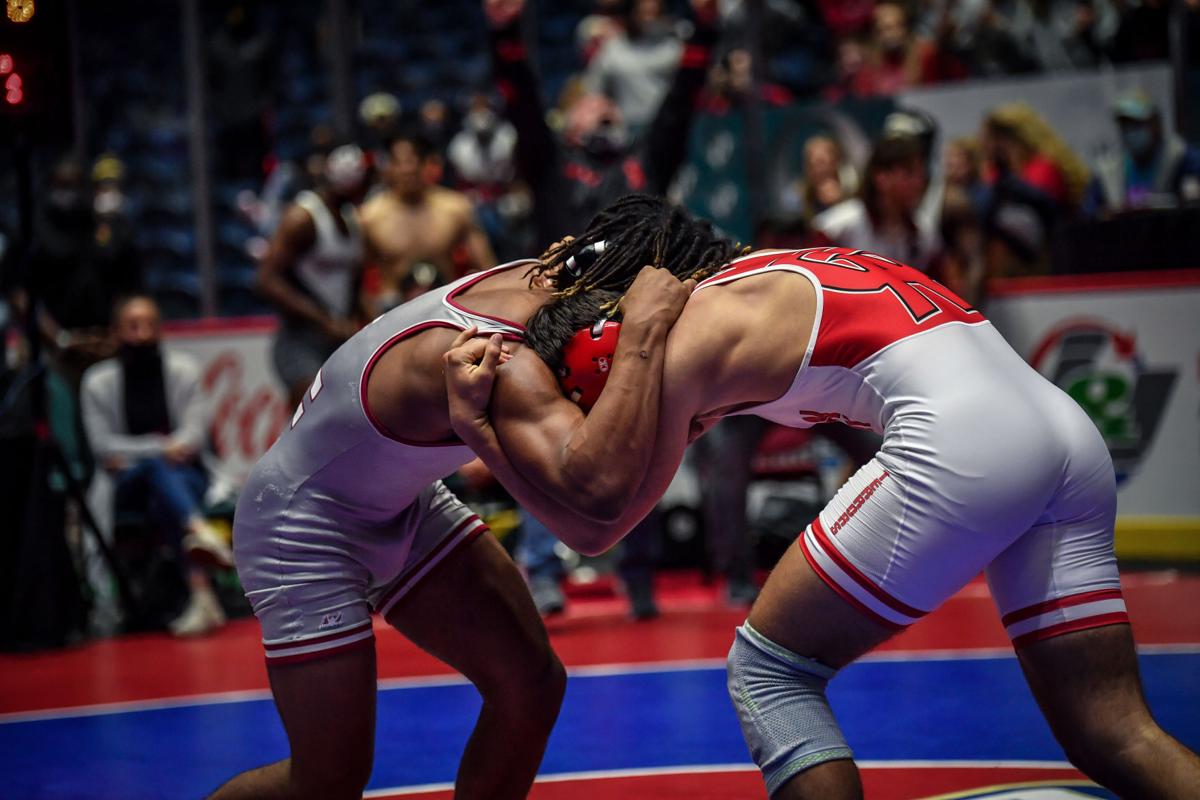 Jackson Wakeland and Brayden Bell battle it out in the 182-pound finals match.

Jackson Wakeland gets emotional after realizing he won the 182-pound state title.

Jackson Wakeland celebrates winning the 182-pound title at the GHSA 6A State Tournament.

Jackson Wakeland and Brayden Bell battle it out in the 182-pound finals match.

Glynn Academy wrestler Jackson Wakeland has only been wrestling for about two and a half years, but that didn’t stop him from becoming the Terror’s first-ever state champion wrestler — only the second in Glynn County.

Since he started wrestling in ninth grade, Wakeland’s desire to be the best, along with a strong work ethic, elevated him through the 182-pound weight class.

“He's got a desire to want to be the best that he can be in whatever he does,” Glynn Academy coach and Jackson’s dad, Scott Wakeland, said. “All you do is just encourage the good things and discourage the things that could be detrimental and put it in God's hands.

“I don't want to say it's easy to coach him, but it is because he wants it. That's what's important. It's not wanting the accolades or the write-up in the paper. No, he wants to be the best he can be, and from that comes all the other things.”

“Being the first Glynn Academy State champ is a great personal accomplishment, but what means even more to me is the growth that my teammates and I had throughout this season along the way to that victory,” Wakeland said.

He battled through four on Thursday to make it to the finals, and it wasn’t an easy feat.

He pinned his first two opponents on Thursday. Then in the third match against Nate Silva of Kennesaw Mountain, the two battled it out until Wakeland won 13-9 in overtime.

“I knew it was going to be tough,” coach Wakeland said. “Jackson, being just who he is, he gritted it out. He was in extremely good condition and was able to take him in overtime as the boy continued to wear down.”

The fourth match was against Chase Disney from Creekview. Jackson defeated Disney 9-4 to make it to the finals.

His finals match on Friday came against a familiar foe, Brayden Bell from South Effingham High. The two battled it out in the Area Tournament the week before, where Bell edged out Jackson.

“I stepped onto that mat knowing that I wanted to make history,” Wakeland said. “I knew that i was going to give every ounce of energy I had and prove to myself that my hard work and dedication was worth it.”

However, things would be different this time around, resulting in Jackson winning The Terrors’ first state title winner in wrestling. It wasn’t easy, though, and coach Wakeland said it was a battle.

Neither wrestler scored a point in the first round, so Bell chooses bottom to begin the second round. He escaped and earned a point to go up 1-0 on Jackson. After the second round, Jackson started on the bottom and quickly escaped making it 1-1. After grabbing Jackson's singlet, Bell earned a technical violation, ultimately sealing the deal for a Terror victory.

“Initially, I think I was in shock. I couldn’t believe that I had done it. I had won a state championship,” Wakeland said. “I accomplished something I dreamed of doing. Quickly, I got my head back on my shoulders, took off my ankle band, and walked over to my dad, and wow — then my emotions erupted. I cried tears of joy and relief. I put my gold medal around my neck and found my very happy, tearful mom, my brother, grandparents, and teammates to celebrate.”

Coach Wakeland said everything came together for the state tournament, and all of Jackson’s hard work had paid off.

“I'm just extremely proud — number one of what it took to get there, discipline, studying, practicing, drilling, constantly working on improving skills,” coach Wakeland said. “Even if he wouldn't have won — that in itself is the accomplishment. He was doing everything right, and that's all you can ask for as a coach — made it easy as a coach.

“I'm just ultimately proud because I didn't have to bark at him or give him a hard time about doing any of the things. He was driven to do that. He used his skills, the things that he's been blessed with, and he's worked hard at it. I'm just proud that he was able to win.”

His mom Kati, younger brother, grandparents and a small group from Glynn Academy were there to root him on and see him earn his title.

Jackson is one of those kids that understand what it takes to sacrifice things and how much dedication it takes to achieve something. That trait isn’t just on the wrestling mat either, but in the classroom and in anything he does. Jackson holds a 4.2 grade-point-average and is an active member of the local FCA chapter.

Coach Wakeland said it wouldn’t surprise him if Jackson repeated next year because he has that kind of drive.

“The Lord has blessed him, and he uses his gifts and talents to serve the Lord,” coach Wakeland said. “He's always that way. Very seldom do you see him without a smile on his face — very positive, very helpful, working with others, and any facet that he can. He just is a special kid.”

Repeating will be his goal for his senior season, and Wakeland has a few other plans in mind moving forward with wrestling.

“My next goal in wrestling is to repeat history and become a two-time state champion,” Wakeland said. “After that, college wrestling will be a must. As soon as I stepped foot on that mat my freshman year, I knew i wanted to pursue wrestling at a collegiate level. And if one thing leads to the other, I’d love to make it onto the USA wrestling team in the future.”