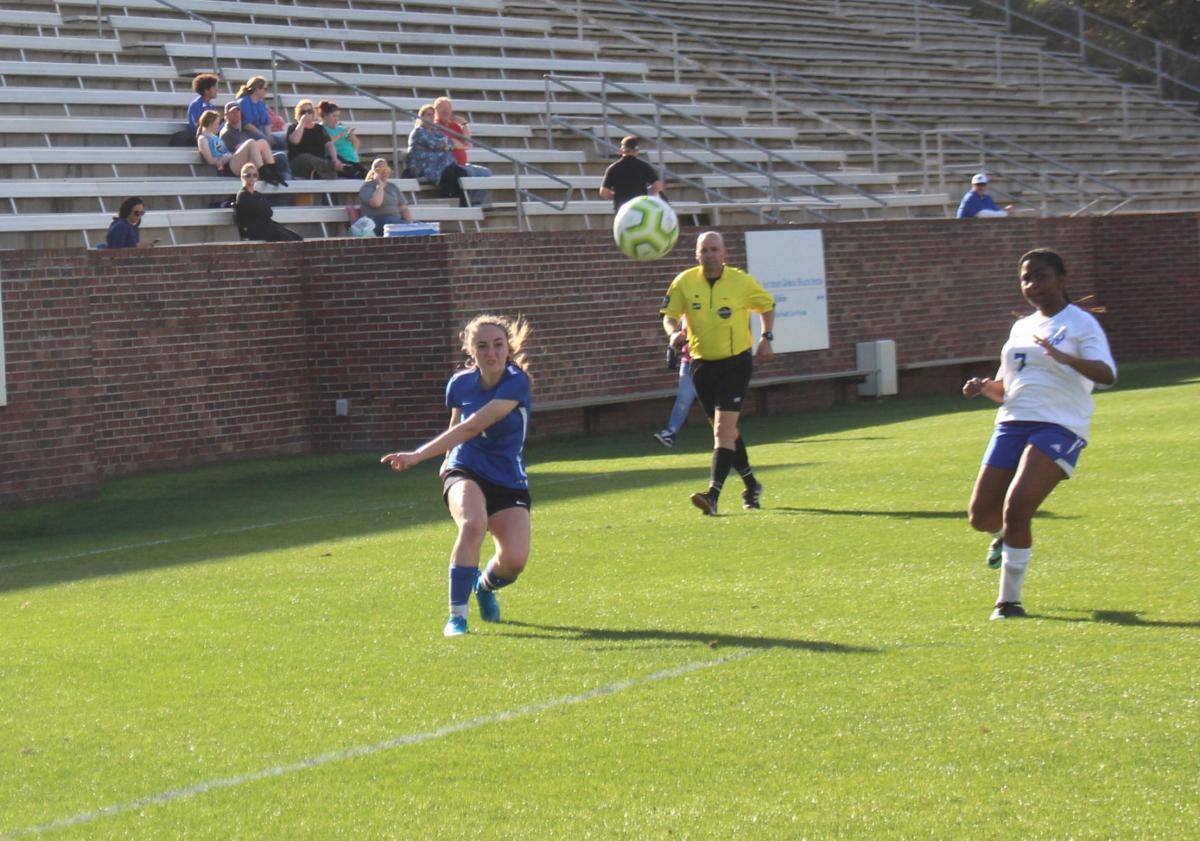 Jalyn Morgan kicks the ball toward the goal against Woodville-Tompkins on Tuesday. 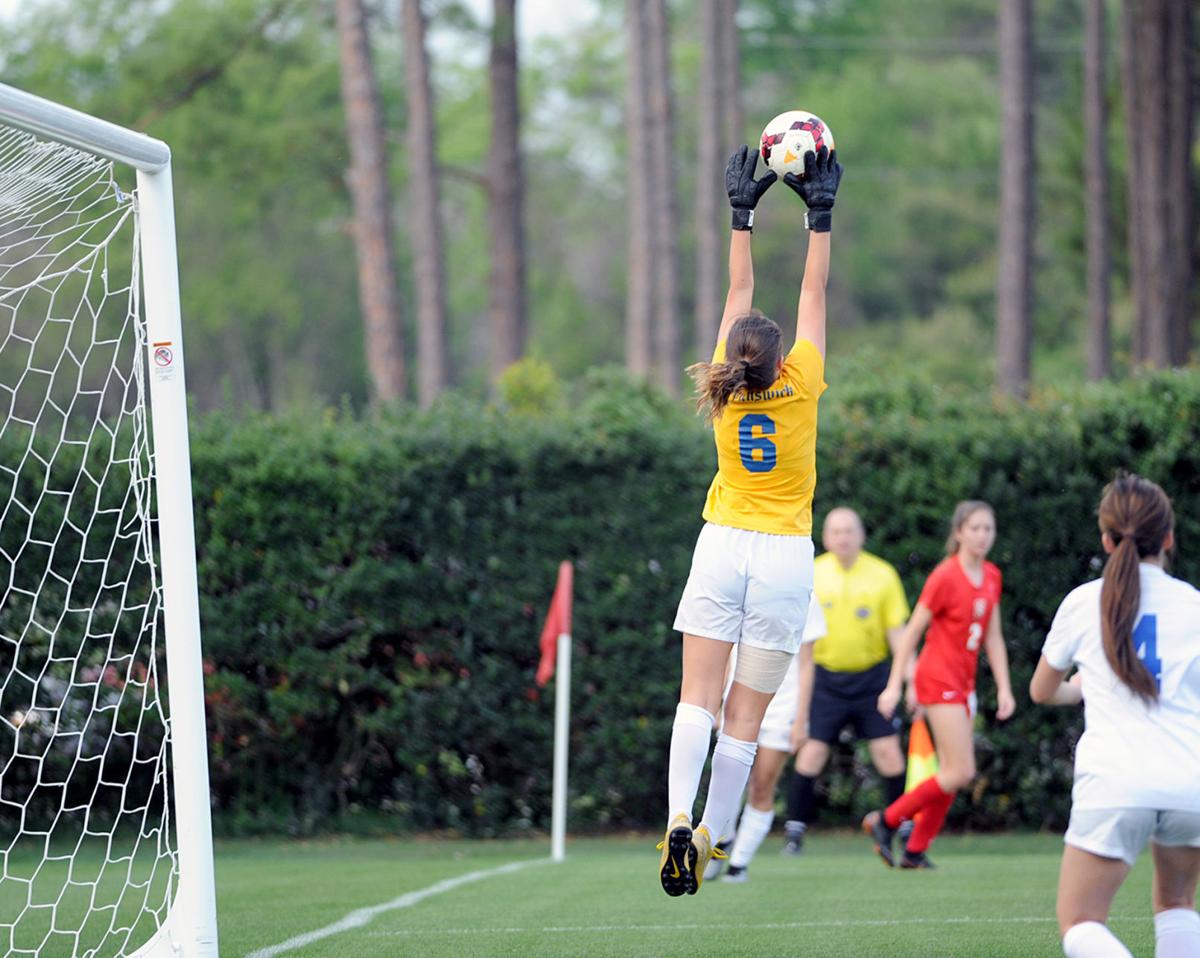 Brunswick High's Rylee Brumbaugh makes a save this past season at Glynn County Stadium. 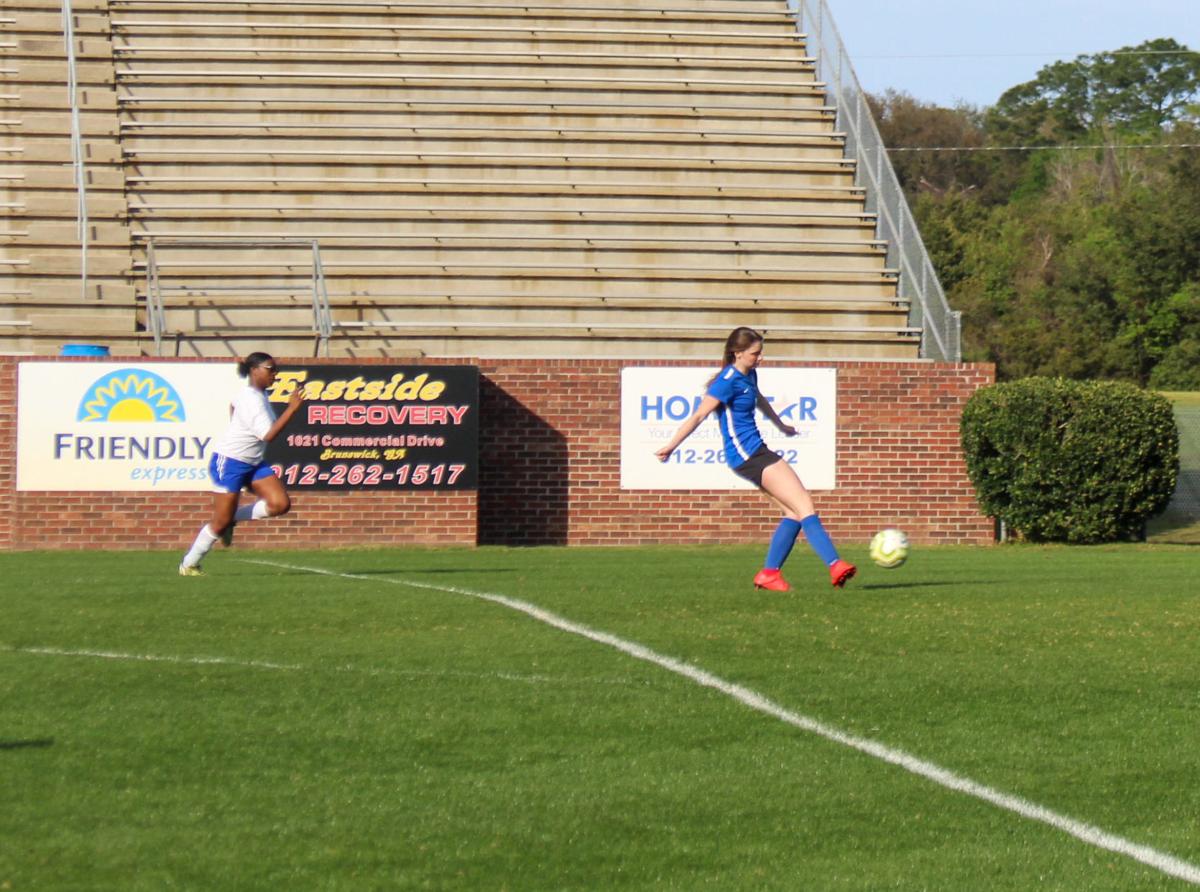 Mackenzie Ponsell takes a shot at the goal on Tuesday. 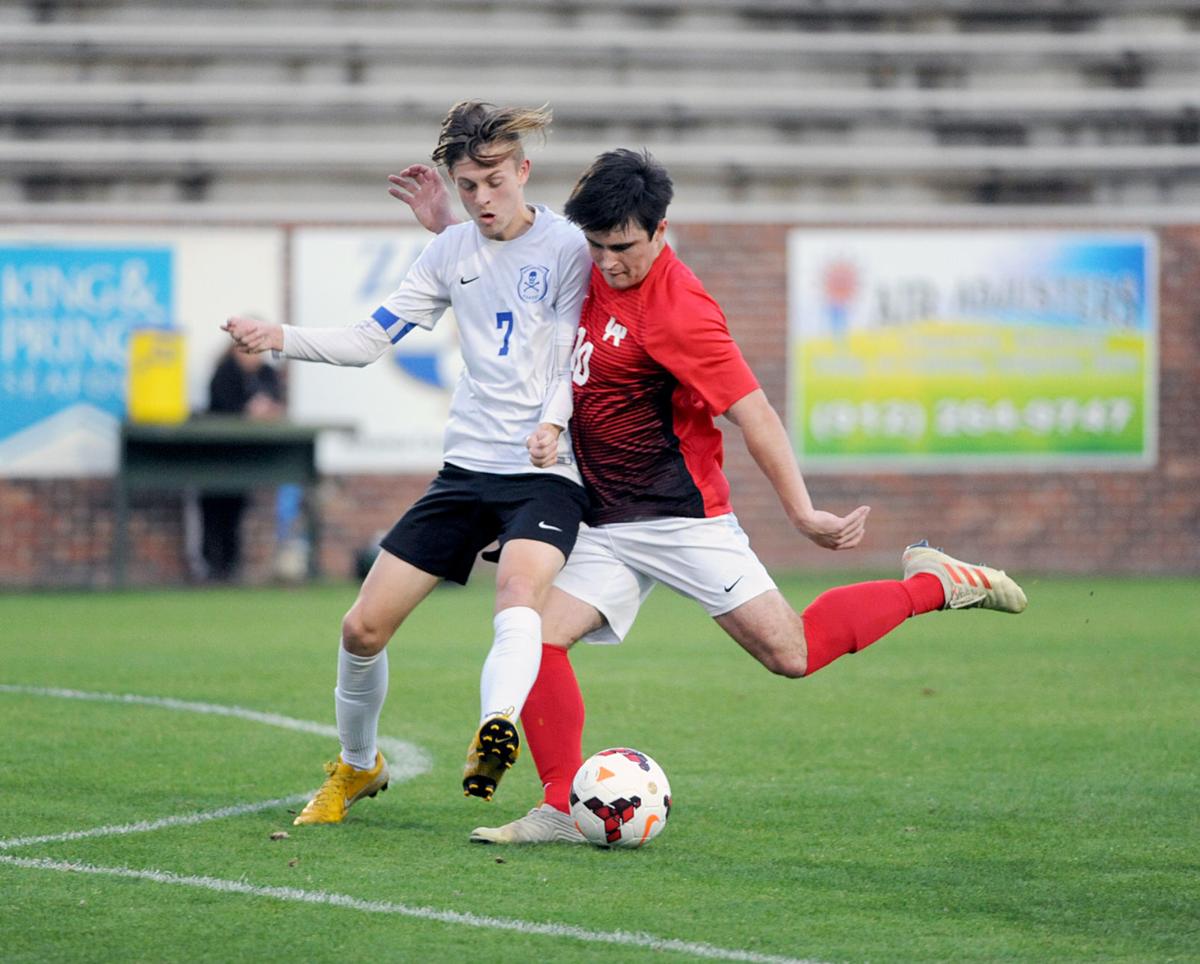 Brunswick High's Mason Palmer and Glynn Academy's Gray Sasser battler for a ball this past season at Glynn County Stadium. 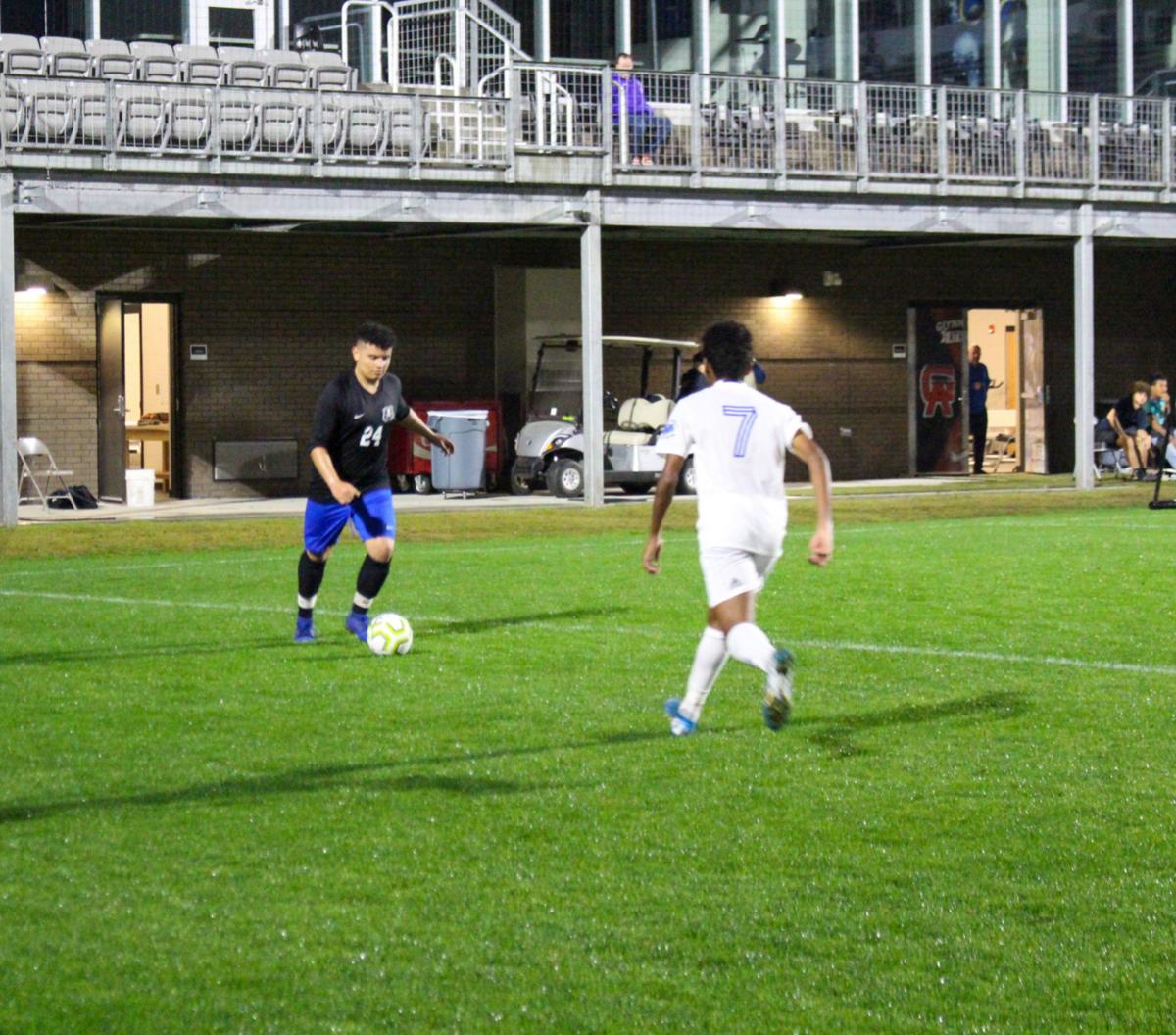 Jalyn Morgan kicks the ball toward the goal against Woodville-Tompkins on Tuesday.

Brunswick High's Rylee Brumbaugh makes a save this past season at Glynn County Stadium.

Mackenzie Ponsell takes a shot at the goal on Tuesday.

Brunswick High's Mason Palmer and Glynn Academy's Gray Sasser battler for a ball this past season at Glynn County Stadium.

As part of the Glynn County Schools Athletic Department’s ‘Be the Light’ campaign and videos they published earlier this month, The News is set to honor each of the community’s spring senior athletes.

Today we honor Brunswick High’s boys and girls soccer seniors. The boys’ team has six seniors graduating, and the girls have five.

While it’s a large group, they mean a ton to both the boys’ coach Daniel Szokoly and the girls’ coach Greg Sturm. They started as Brunswick’s coach when this group of seniors were freshmen, so the relationship is close.

Szokoly said he probably learned as much from his seniors as he taught them. That bond between coach and player formed during that first summer.

“They came the summer where I switched from the JV coach to head coach, and it was a brutally hot summer,” Szokoly said. “That was the first time I’d ever done summer practices –– they didn’t complain once they just came out and stuck it out –– it was a learning curve for all of us. I didn’t know that I shouldn’t have practices at noon on a summer day, and so we’re all just kind of learning together.”

The Pirates finished the season 4-3 overall and 1-2 in the region. Szokoly said it was unfortunate the season got cut short because he felt like his guys were gaining momentum.

“I’m very proud of how far they’ve all come, and it’s bittersweet because I finally got the team where I wanted everybody to be, and then the season got cut short,” Szokoly said.

With Szokoly taking over as the coach when these guys were freshmen, they’ve made many memories along the way.

However, the coach said those summer practices were some of his fondest memories of this senior group.

“It’s just low stress. There’s not a game hanging over your head,” Szokoly said. “No one has to be there — people want to be there. It’s just fun because everyone can take things a little bit less seriously and enjoy soccer.”

He said these senior’s leadership and discipline are what make them stand out to previous groups. They hold each other accountable.

“They made their expectations clear — day one of practice,” Szokoly said. “I didn’t have to get on to any players this year about goofing off or getting distracted because they would jump on them so quickly that it was great for me and made my life so easy.”

Like Szokoly, Sturm started when his group of seniors was freshmen. Four of his five graduating girls began with him, and the other joined this season after moving down from Atlanta.

“The opportunity to see them grow as soccer players, but also as young ladies have been amazing,” Sturm said. “To see the leadership they showed this year as seniors were, despite it being a shortened season, it’s been cool to see it. That was the best part of it.”

While it was a slower start for the girls, Sturm made some position switches, and it started turning their season around — until it got cut short. He said even though the season got cut short, this senior group has all contributed in their own way.

His favorite moment with this group was earlier this season during the Tournament of Champions.

“The team that we played was from Athens — generally, they’re a pretty good soccer area,” Strum said. “We didn’t really know what to expect going in, and we went out and played the best game of the season against a quality opponent.”

This group of seniors wasn’t familiar with being the leaders because many of them didn’t start last season and had never been in this position before.

“This year, taking the role of being in a really important position, and having to be on the field all the time, they really stepped up,” Strum said. “So I’m really proud of them.”