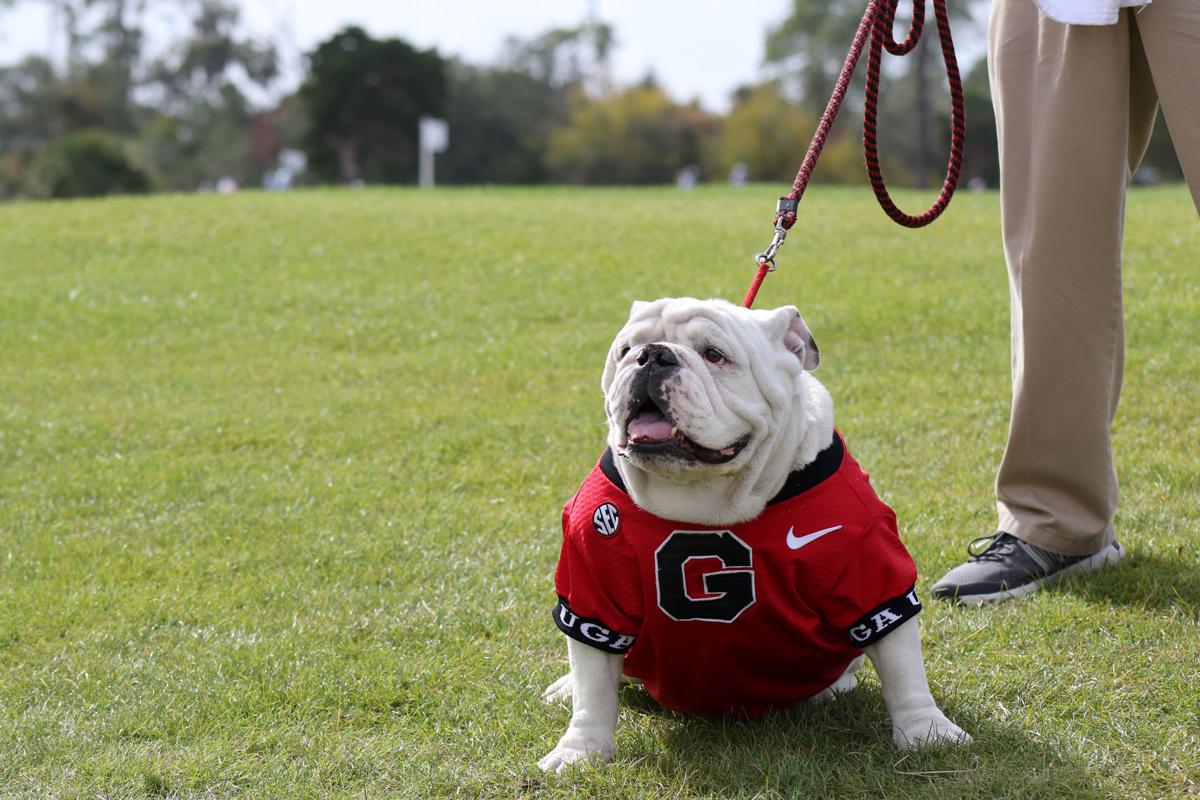 Uga X takes a seat outside the University of Georgia alumni tent on the Seaside Course of Sea Island Golf Club on Thursday during Day 1 of the RSM Classic. 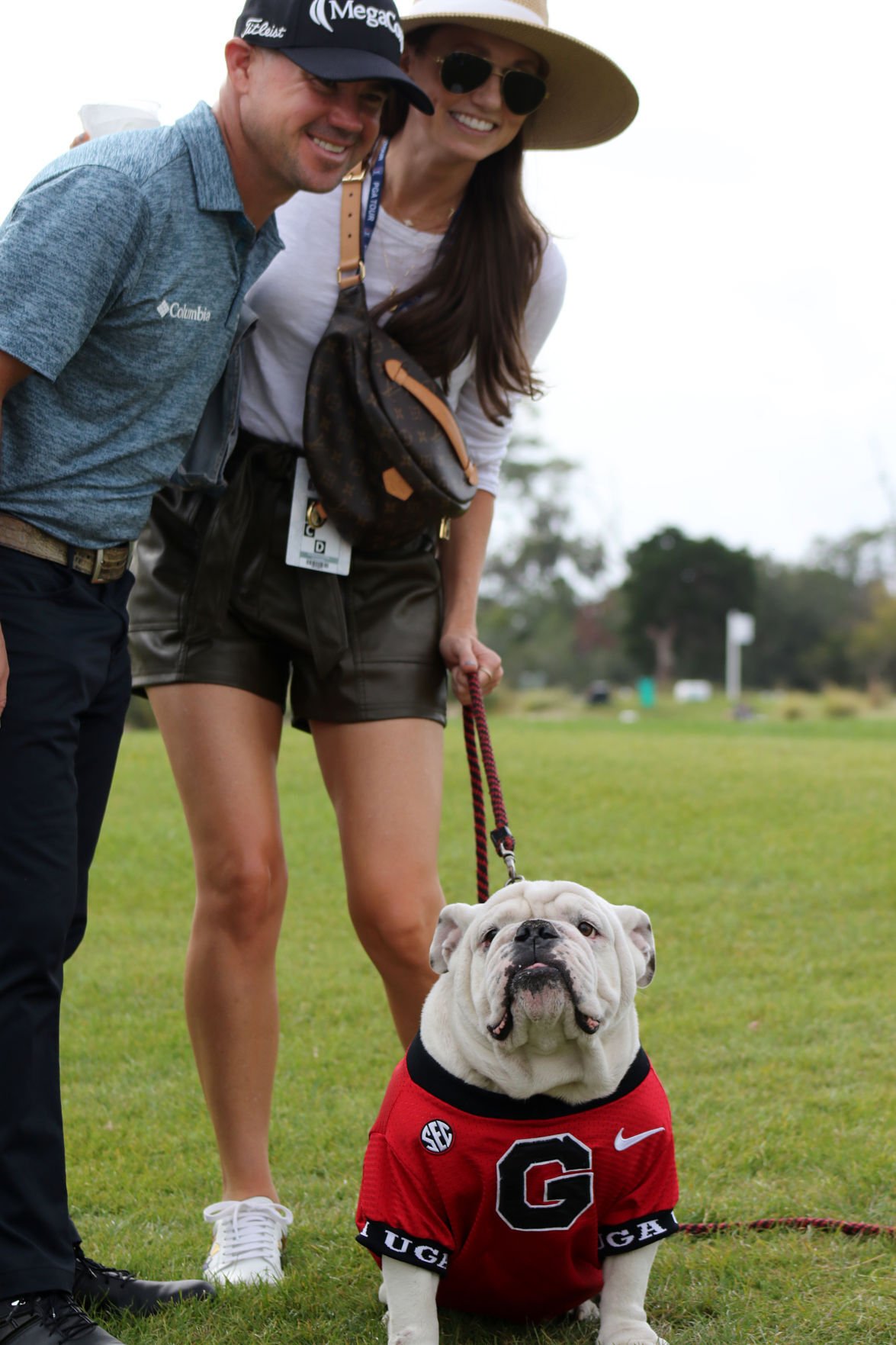 St. Simons pro Brian Harman and his wife Kelly Van Slyke pose for a photo with Uga X on the Seaside Course of Sea Island Golf Club on Thursday during Day 1 of the RSM Classic. 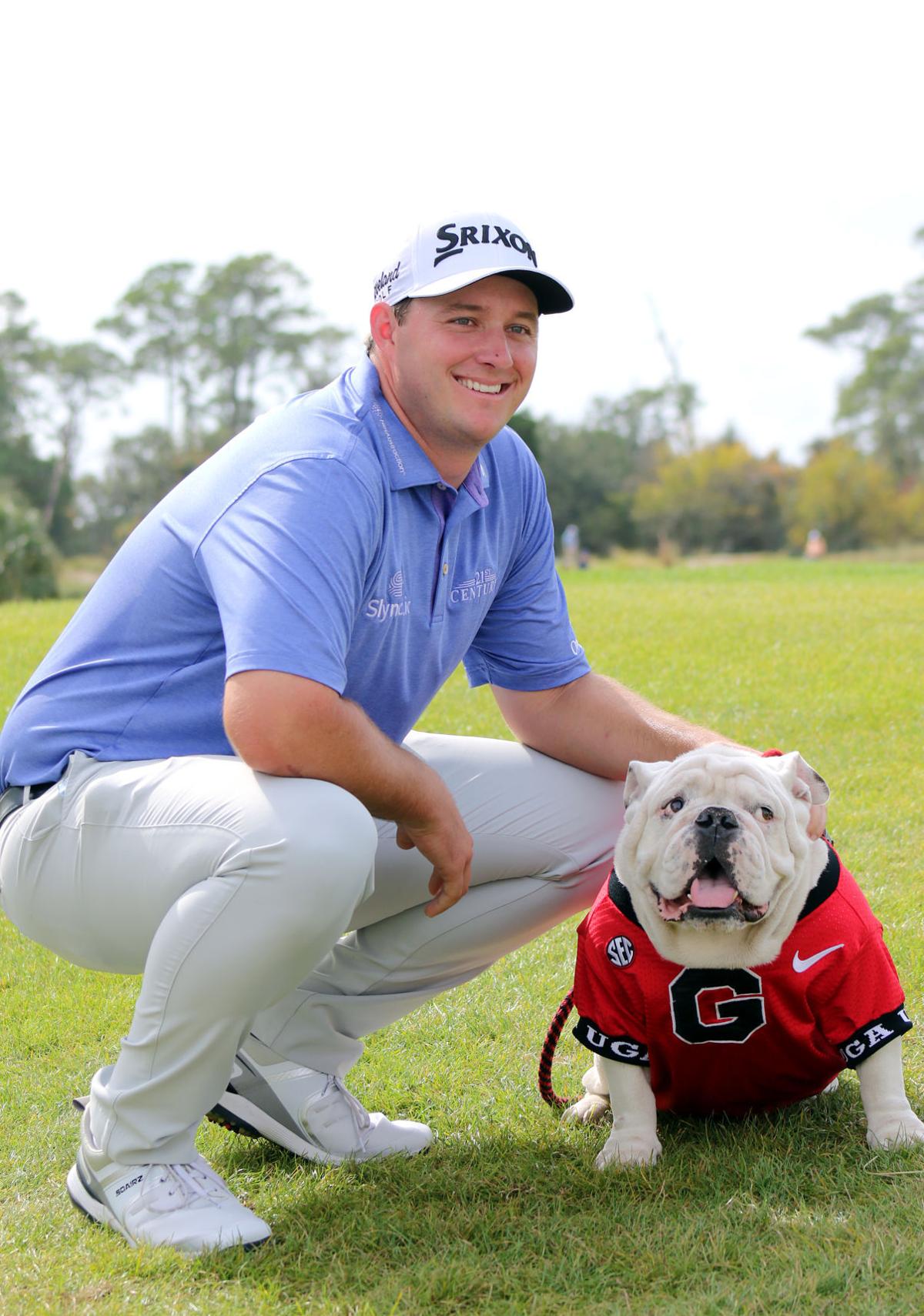 Sepp Straka poses for a photo with Uga X on the Seaside Course of Sea Island Golf Club on Thursday during Day 1 of the RSM Classic. 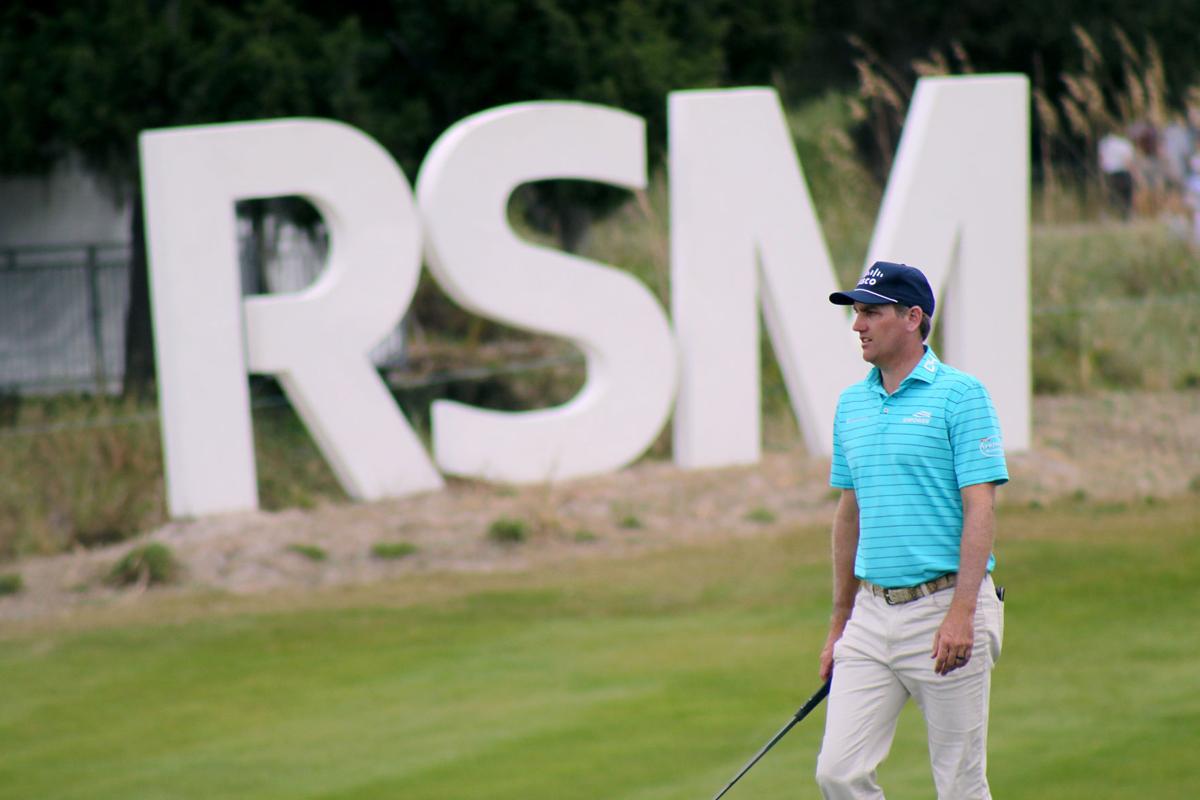 Brendon Todd walks No. 17 on Seaside during Day 1 of the RSM Classic on Thursday at Sea Island Golf Club.

Uga X takes a seat outside the University of Georgia alumni tent on the Seaside Course of Sea Island Golf Club on Thursday during Day 1 of the RSM Classic.

St. Simons pro Brian Harman and his wife Kelly Van Slyke pose for a photo with Uga X on the Seaside Course of Sea Island Golf Club on Thursday during Day 1 of the RSM Classic.

Sepp Straka poses for a photo with Uga X on the Seaside Course of Sea Island Golf Club on Thursday during Day 1 of the RSM Classic.

Brendon Todd walks No. 17 on Seaside during Day 1 of the RSM Classic on Thursday at Sea Island Golf Club.

Standing in the tee box of hole 17 on Sea Island’s Seaside Course on Thursday, Brendon Todd dropped a shot 6 feet away from the cup before strolling past the RSM adorning the fairway to cheers from the gallery.

After sinking the birdie putt, Todd was greeted by the familiar face of an English bulldog. It has become an RSM Classic tradition for former University of Georgia golfers to pose for a photo op with Uga outside the alumni tent situated between Seaside’s Nos. 17 and 18.

In recent years, Uga has found himself with an increasingly larger work load during tournament week as more Georgia golfers become regulars on the PGA Tour. Ten former Bulldogs golfers qualified for the FedEx Cup playoffs last year, the most by any college, and 35 titles have been won by UGA alumni since 2010.

“It’s awesome, I love it here,” Todd said following the opening round that saw him finish tied for 55th. “It feels like about as much of a home event as we get here on Tour. To have 11 Bulldogs in the field, have the support of the tent there is great.”

Todd was the first of four consecutive Georgia golfers to pass by the “Dawg House,” his birdie on No. 17 dropping him to 4 under on the round through eight holes.

Golf can be a fickle sport though. Rolling, Todd took a brief moment to take a picture with Uga X, who is dubbed Que, before continuing his round. His final 10 holes went for par.

“I hit a great 6 iron in there to about four feet, and slipped it in there,” Todd said. “Then they surprised me with a bulldog, which I’m not sure if it was Uga. I think they kept calling him Que.

“So we take a picture, then he took all my momentum. I didn’t make another birdie the rest of the day.”

Still, Uga had a rallying effect for other Georgia golfers. Greyson Sigg is the latest Bulldog to carve out a spot on the PGA Tour after being named the Rookie of the Year on the Korn Ferry Tour.

Sigg approached the alumni tent at 3 under, and after his encounter with Uga, he birdied four holes on the back nine — a bogey on No. 9 to end his round was the only blemish in a career round for the PGA Tour rookie.

“They called me over and Uga was standing there, so we got a quick picture, and I was like, ‘All right, now back to golf,’” Sigg said. “But it was good to see him for sure. I hope he brings some of this good mo over to the golfers.”

Picking up on some of the good from Georgia’s undefeated and top-ranked football team collected by Uga and transferred through the osmosis of a pet, Sigg shot a 64 on Thursday — four strokes lower than his previous best round — finishing tied for 21st at 6 under.

In just his 16th event on the PGA Tour, Sigg got off to the best start among an impressive group of former Bulldogs, save for Russell Henley, who is two strokes off the lead at 8 under.

Harman and Mitchell finished tied with Todd at 4 under, English and Kirk are just behind at 3 under, Straka shot 2 under, Thompson finished at 1 under, Swafford finished at even par, and Kisner rounded out the group at 4 over.

Harman, a St. Simons resident, was one of the Georgia golfers to receive a show of support from Uga. The continuous line of Bulldog mascots has been owned by the Frank W. “Sonny” Seiler family of Savannah since 1956.

A Savannah native, Uga’s appearance was particularly meaningful for Harman, as were some words of encouragement from Georgia football head coach Kirby Smart earlier this week.

“It’s pretty incredible when you look at the PGA Tour, and how successful the Georgia golfers have been,” Smart said. “I’m certainly proud of what they’ve done and what they’ve been able to do. I’ll be watching how the finish goes this weekend down there.”

Harman praised Smart’s work with the football team, mentioning he had the opportunity to play nine holes with the coach before the season.

“it was nice getting to meet him,” Harman said. “I’m just so happy for his success, and I wish him all the luck in the world.”

While each of the 155 golfers remaining in the RSM field have a title on their mind this weekend, the pack of 11 also have another couple of championships on the brain as they return near their old stomping grounds.

The SEC Championship game is set for Dec. 4 in Atlanta, where Georgia will meet the winner of the SEC West in a showdown that could clinch the Bulldogs’ No. 1 seed in the College Football Playoffs.

Some of the PGA Tour veterans have adopted Smart’s mindset, echoing his talking points when it comes to the football team.

“Got to stay focused,” English said Wednesday. “I think Kirby knows exactly the feeling the team has with being with Alabama for a while. He doesn’t let them get too complacent about being No. 1 and they know they’ve got to challenge every single week and I think they step up to the plate.

“They haven’t had a game where they fall flat and I think that comes from the top. Kirby’s got them going and I hope would get to see it this year.”

Harman thought better than to give his prediction on the Bulldogs’ season: “mum is the word,” he said.

Sigg had no such reservations when prophesying the program’s first national championship since 1980.

“I think they’re going to do it,” Sigg said. “Absolutely.”