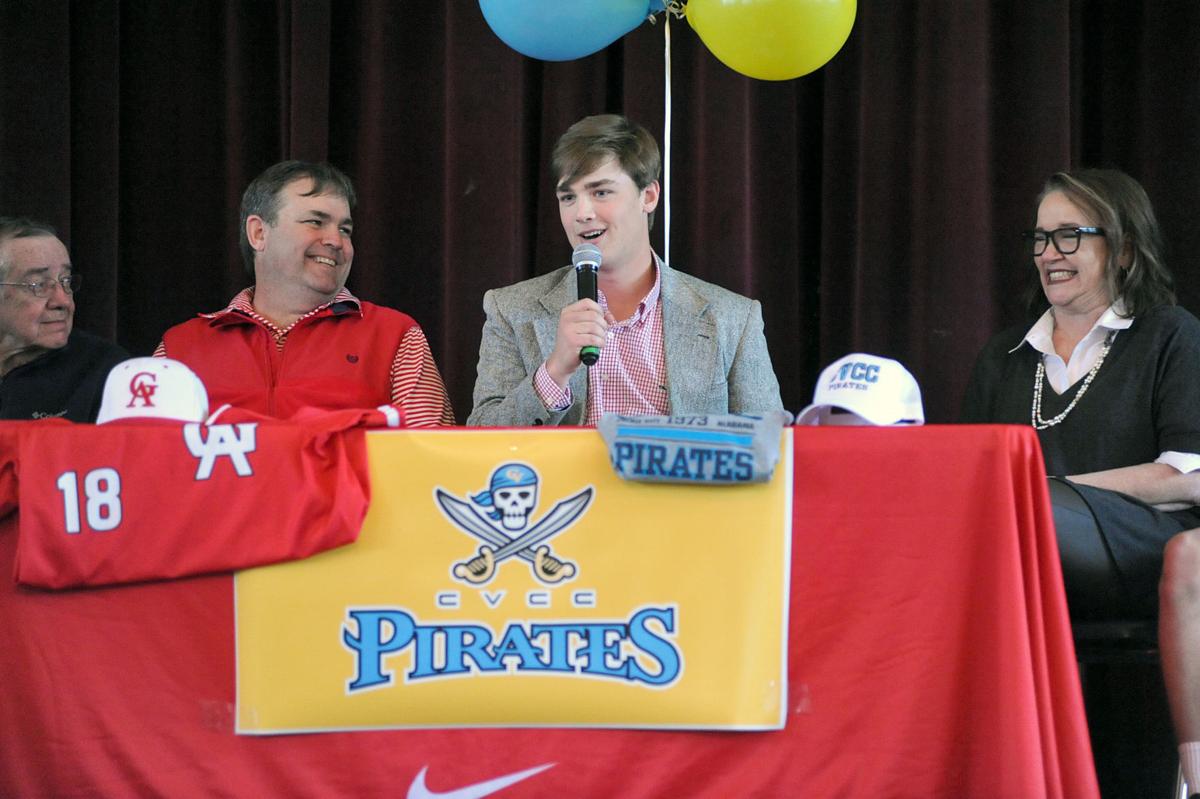 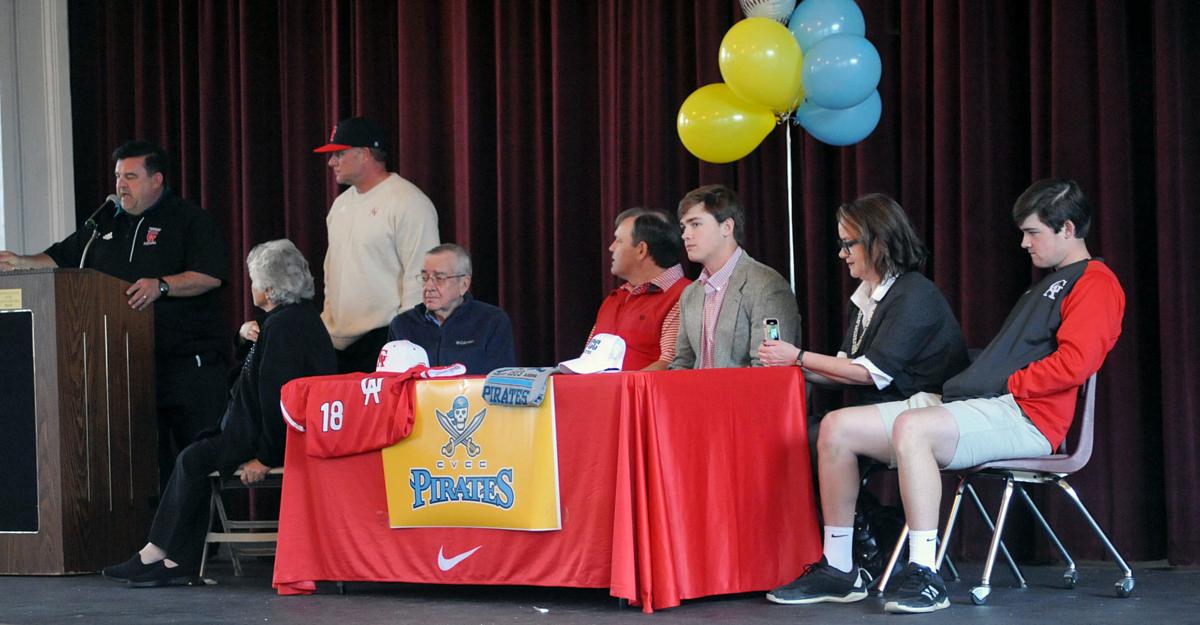 Glynn Academy’s Paul Hegeman is joined on stage by his family before committing to play baseball at Chattahoochee Valley Community College during a signing ceremony Thursday. 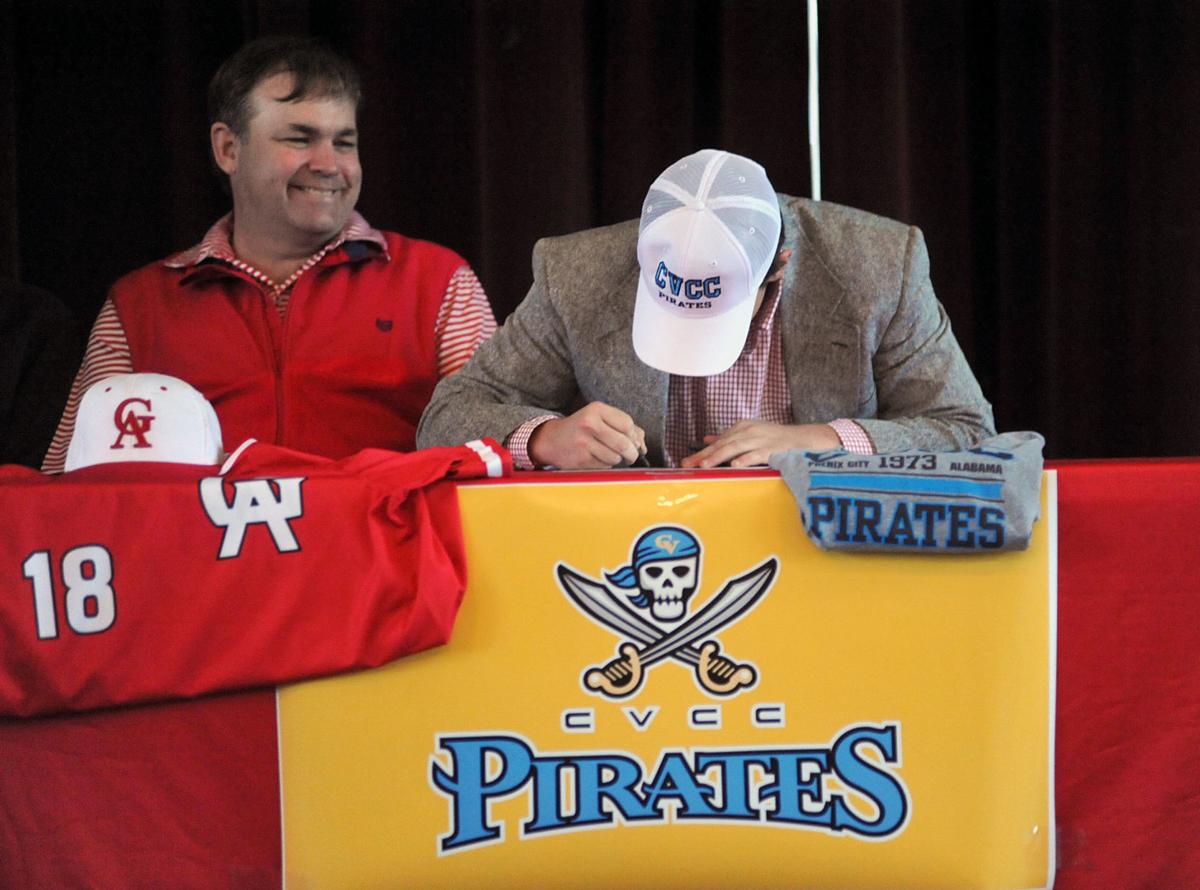 Glynn Academy’s Paul Hegeman is joined on stage by his family before committing to play baseball at Chattahoochee Valley Community College during a signing ceremony Thursday.

A blue and yellow sign reminiscent of Glynn Academy’s crosstown rival hung from a table on stage in the school’s auditorium Thursday as Hegeman signed a letter-of-intent to continue his baseball career at Chattahoochee Valley Community College in Phoenix, Ala.

“It’s weird, but it’s all right,” Hegeman said with a smile as he described his feeling on donning the colors of his high school rival. “It’s a great opportunity to play some great baseball, so I’m looking forward to it.”

A three-time all-region player at Glynn Academy, Hegeman hit .333 at the plate for the Terrors last season with three home runs and 17 RBI. On the mound, he crafted a 3.28 ERA over 51 13 innings, striking out 62 while walking just 15.

“He’s been a staple of our program the three years that I’ve been here, and he’s a tremendous asset in so many ways,” said Glynn Academy head coach Trent Mongero. “He’s a leader by example– his true work ethic, his passion, his character. Just can’t say enough about this young man.”

Hegeman’s standout season earned him an invitation to play for the 2019 Junior Team Georgia in the 25th annual Sunbelt Classic, a tournament in Oklahoma that acts as a showcase for the top prep baseball players in the country.

The experience seems to have helped Hegeman take his game up yet another notch — he’s 7-of-18 with six walks, three RBI and three runs scored for the 6-0 Red Terrors this season. In his only appearance on the mound, the senior went a full seven innings against Gainesville, allowing just four hits and two earned runs while striking out 12.

Despite his numbers and accolades, Hegeman said the recruiting process was sort of slow for him. It picked up near the end with a few Division 2 schools extending offers, but ultimately he felt there were more opportunities available to him at the junior college level.

A two-year pit stop at one of the top JUCO schools in the nation could prove to be extremely beneficial to Hegeman, who also played tight end for the Terrors’ football team during the fall. Now, Hegeman can put his full focus on being the best baseball player he can be.

“I’m going to be able to do it year-round,” Hegeman said. “Football has always been like my break from baseball, so to say, but I’ve really enjoyed football and everything it’s given to me.

“But now I get to play baseball, and focus on that year-round, so I’m really looking forward to where that takes me.”

Hegeman was confident he could have found an opportunity to play college football if that was the path he wanted to pursue, but baseball has always been his passion and first love.

He’s played the sport for as long as he can remember.

“My dad would always take me out in the yard and throw with me,” Hegeman said. “I don’t remember him ever saying no to playing catch with me. I’m very appreciative of that.”

Hegeman will join a baseball program at Chattahoochee Valley Community College that has led the Alabama Community College Conference in nearly every offensive and defensive statistical category two seasons ago, and has made appearances in the NJCAA DI Baseball World Series in each of the past two years.

“What an opportunity he has,” Mongero said. “Those who don’t understand junior college baseball, he’s truly going to one of the top programs in the United States of America. Those baseball players there are going to get drafted or play Division 1 baseball when they come out. So it’s a huge opportunity, and he’s certainly earned it.”

While the state gradually lifts restrictions imposed to stop the spread of COVID-19, political campaigns continue to shift toward virtual gatherings and social media.

Reading fuels imagination, and the Marshes of Glynn Libraries hopes youth in the community will take time this summer to use books as a means of transporting themselves to new worlds.