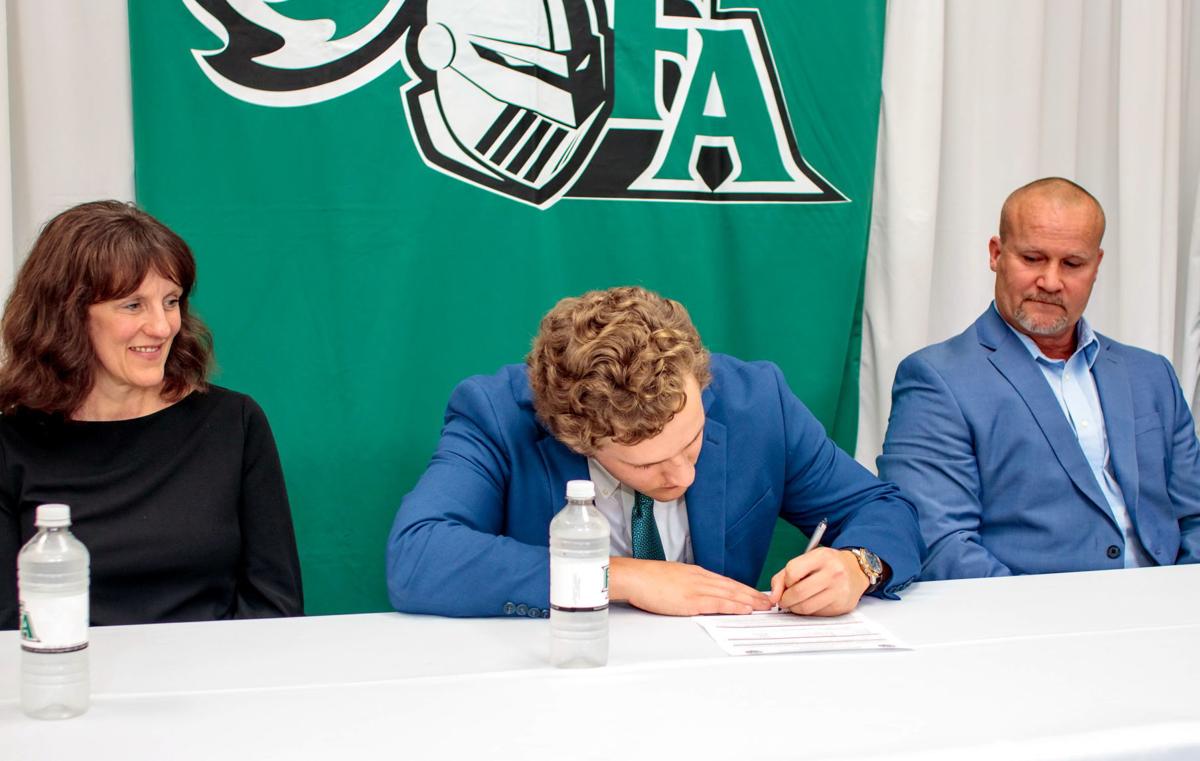 Frederica Academy’s Deke Jernigan is joined by mother Carla and father Handy as he signs an LOI to play baseball at Tallahassee Community College during a National Signing Day ceremony Wednesday. 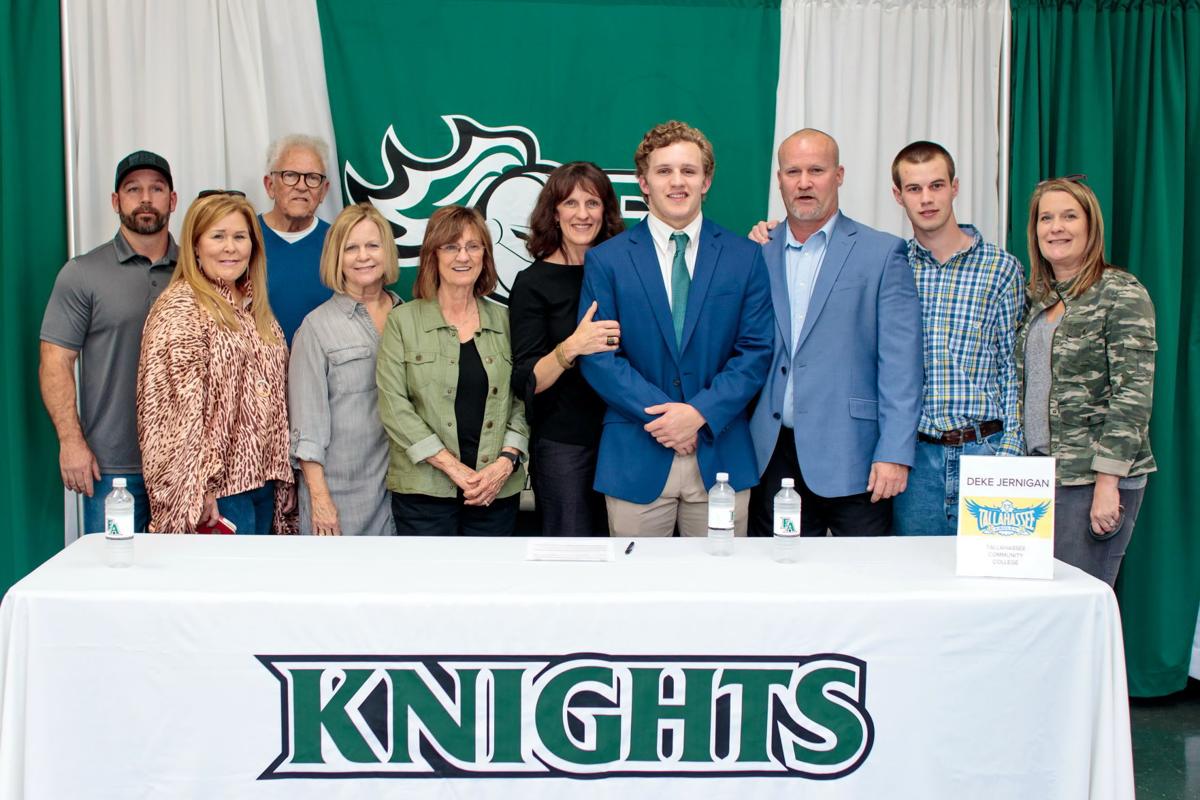 Frederica Academy’s Deke Jernigan is joined by his family after signing an LOI to play baseball at Tallahassee Community College during a National Signing Day ceremony Wednesday. 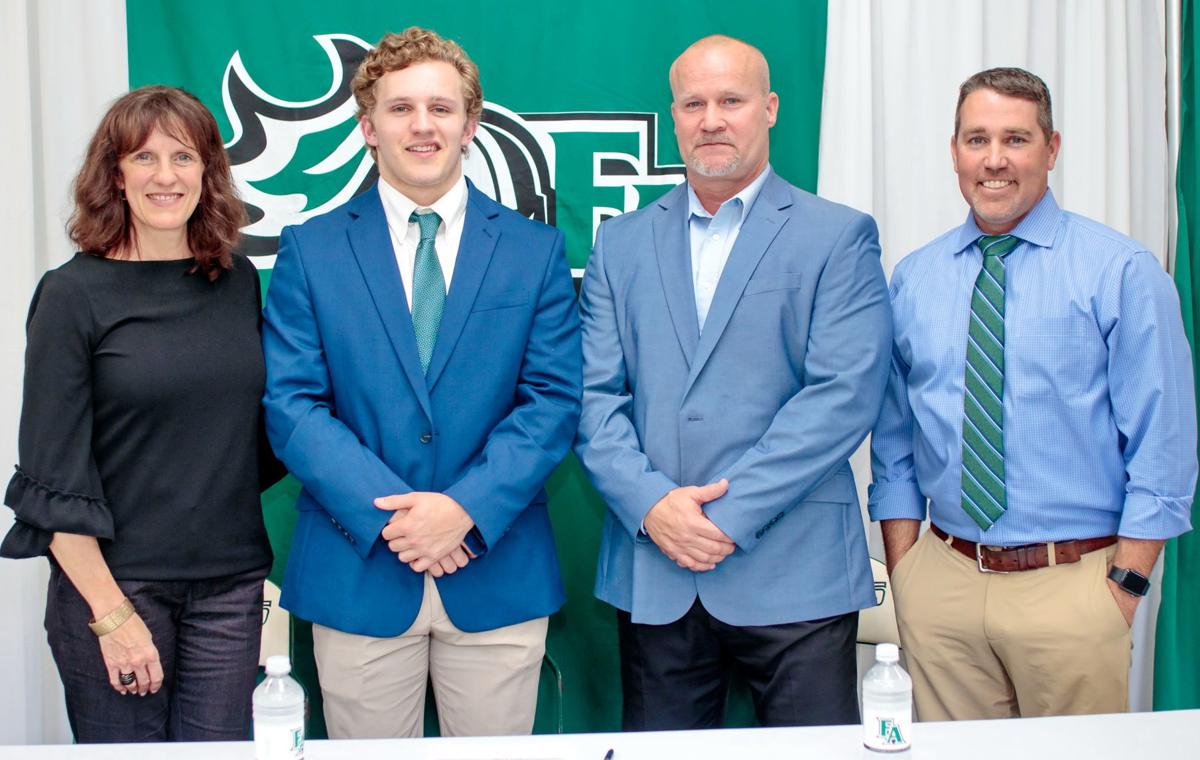 Frederica Academy’s Deke Jernigan is joined by mother Carla and father Handy as he signs an LOI to play baseball at Tallahassee Community College during a National Signing Day ceremony Wednesday.

Frederica Academy’s Deke Jernigan is joined by his family after signing an LOI to play baseball at Tallahassee Community College during a National Signing Day ceremony Wednesday.

Deke Jernigan has been an all-state selection in two different sports each of the last two years.

But when it came time for the Frederica Academy standout to pick between furthering his career on the gridiron or on the diamond, it was an easy decision.

Jernigan signed a letter of intent to play baseball at Tallahassee Community College during a National Signing Day ceremony Wednesday at Frederica Academy, pushing his chips all-in on his first love.

“I’ve just always loved baseball more, honestly,” Jernigan said. “It’s always been that sport that I just loved, and I always wanted to go the long way in it.”

Jernigan’s love for the sport translated to production almost immediately upon beginning his prep career at Frederica Academy.

As a sophomore, Jernigan hit .440 for a Knights team that won Region 2-3A and finished as state runners-up in GISA Class 3A. He continued his hot hitting the following year, and over the past two seasons he’s launched over 20 home runs and stolen more than 35 bases, an especially rare feat for most catchers.

“Deke’s kind of been the catalyst for our offense the last three years,” said Frederica head baseball coach Greg Roberts. “As Deke went, we kind of went. Last year alone he scored over 40 runs. That alone is an astronomical feat. It says a lot about, not only how dangerous of a hitter he is, but also how good a baserunner he is and how aggressive he is at times.

“Normally, I felt pretty good when I saw Deke get on base because we had a chance for a big inning, or at least to push a run or two across.”

Jernigan has been just as crucial for the Knights’ football team, playing a pivotal role in the program’s state championship run a year ago.

Over the past two seasons, Jernigan has racked up more than 140 tackles, 10 tackles for a loss, four forced fumbles, and an interception, in addition to carrying the ball 64 times for 528 yards and four scores this past season.

“Deke’s just a phenomenal athlete,” Roberts said. “Not just football, he’s capable of pretty much anything. You throw a ball at him, and he can handle himself. He’s just super athletic. His hand-eye-coordination is phenomenal. His build, his strength, he’s well put together, and he’s become a very savvy baseball player.”

Now that Jernigan’s football career has come to an end, he’s fully-invested in making the most of baseball his senior year, and moving forward.

Jernigan received offers to play baseball for a few Division II programs, but he’s decided to bet on himself by choosing to spend his next two years at Tallahassee Community College.

“What really made me want to commit there is, he said I’ve been playing football along with baseball and all that, and I haven’t really, what he said is, ‘I haven’t put all my cookies into baseball yet,’ and I just want to go two years down there, then basically I can go any route after that,” Jernigan said.

Although it’s not a four-year school, it’d be difficult to find many collegiate leagues as competitive as the Panhandle Conference in the National Junior College Athletic Association.

“I think it’s wide open,” Roberts said of Jernigan’s future as a baseball player. “The good thing for Deke is Deke can play a lot of different positions. He kind of got thrown into his catching role for me because that’s what we needed the most and he was the best qualified candidate for the job at the time. We needed a catcher and he was the guy that fit the mold the most.

“But the the thing about Deke, he can play the outfield, he can play corner infield spots. He’s capable of a lot, so he’s going to have a lot of options, whether he goes to catch or do one of the others defensively. He can hit, he can run, so he brings a lot of different options to the table.”

Jernigan said he hasn’t yet discussed with the coaching staff what exactly his role will be in Tallahassee, but he’s expecting to take on a utility role playing all over the diamond. While he likes catching, Jernigan said he wouldn’t mind playing anywhere else the coach needs him to.

Roberts is confident that Jernigan will succeed no matter where he ends up.

“I think Deke’s one of those guys that’s going to move on and continue to play baseball if that’s what he wants to do,” Roberts said. “He’s talented enough; as long as it’s what Deke wants, Deke’s going to get it done. That’s just kind of the way it is for him.”