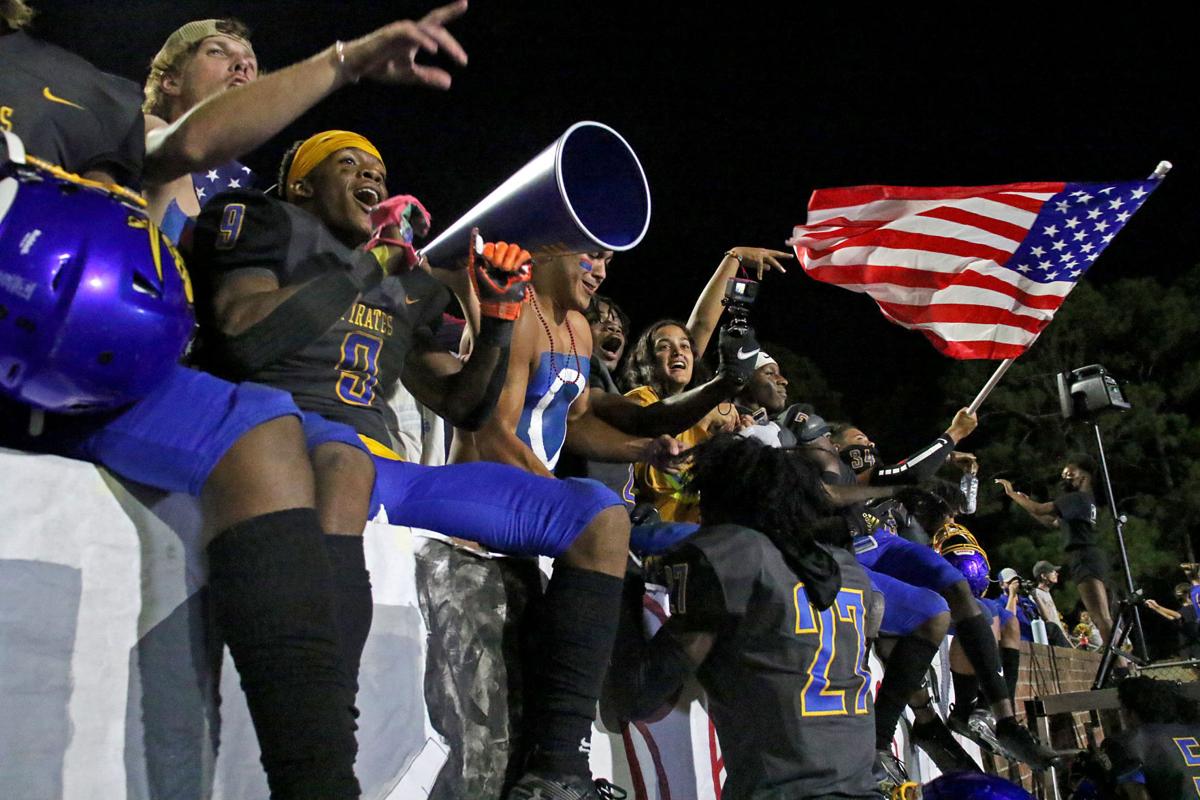 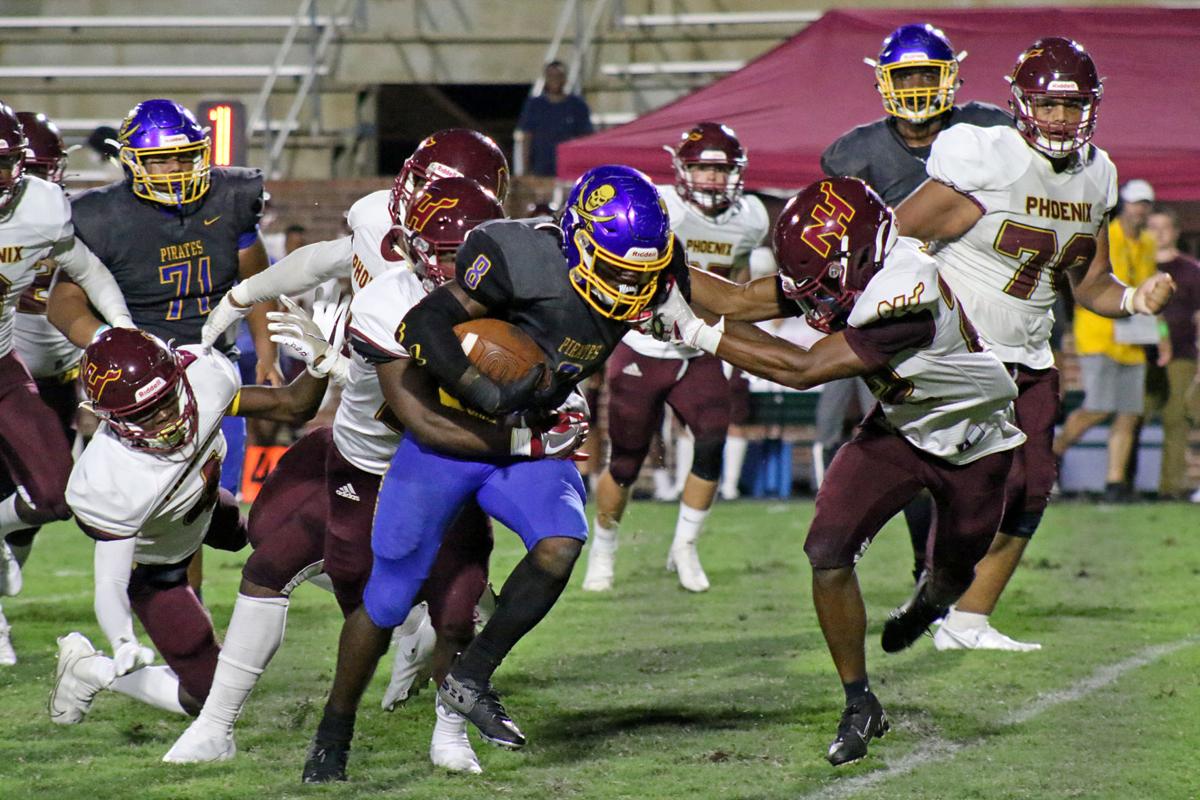 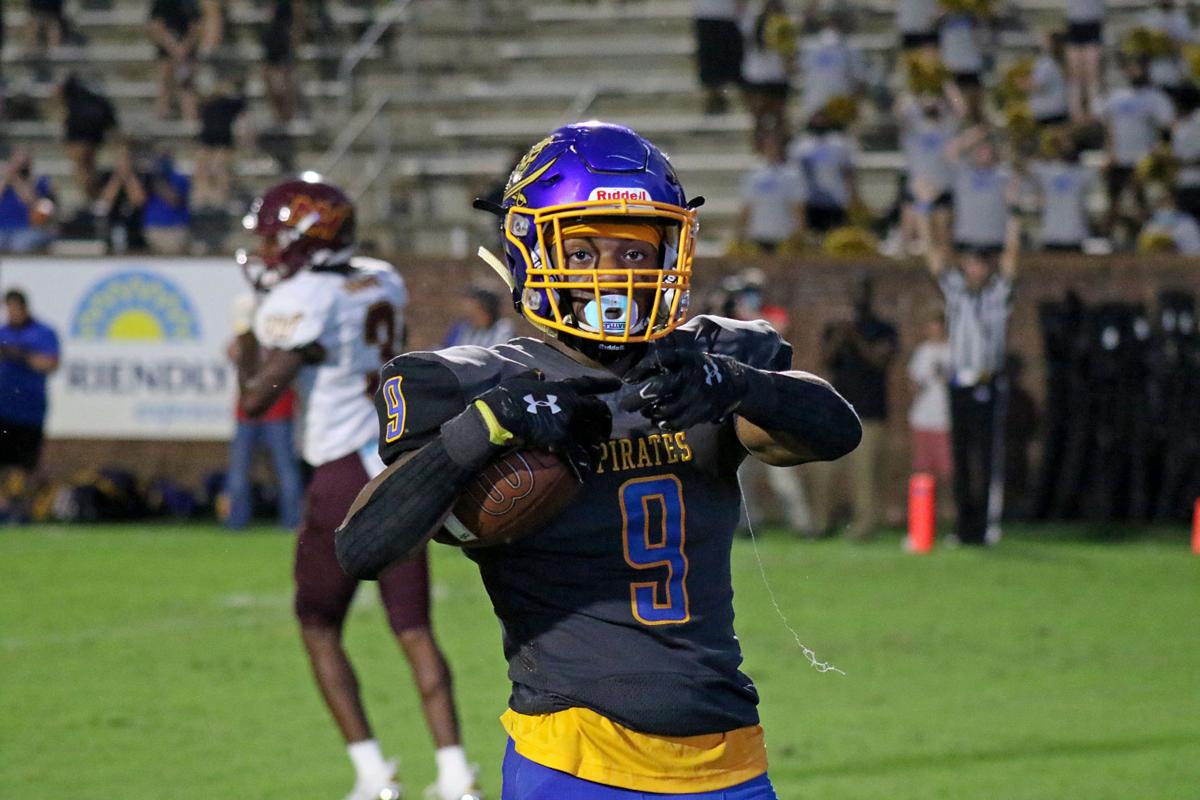 Offense, defense, special teams — Brunswick High did it all as it built a 21-point lead over New Hampstead just four minutes into the matchup between top 10 teams Friday at Glynn County Stadium.

As it turned out, a contest between the ninth-ranked programs in Class 6A and Class 4A was no contest as the Pirates rolled 52-24, securing Brunswick’s best start since 1999.

“I’m proud of the way we responded,” said Pirates head coach Sean Pender. “We knew this was going to be a fight. This team has been putting up 50 points in their last two games, and they get after it. It’s a good football team. They have a tremendous quarterback, they’ve got good receivers, and we knew we had to step up and make plays…

“Overall, I’m proud of the way we played. I think every position was pretty solid.”

Brunswick (3-0) got major contributions from all three phases throughout the evening as it handily disposed of a New Hampstead program ranked for the first time in school history. The Phoenix (3-1) entered the contest unbeaten, having outscored its opponents 142-18.

The Pirates were unfazed.

A 78-yard kick return by Terry Mitchell to open the game set up a 4-yard touchdown run for Ree Simmons on BHS’ first play from scrimmage and began an avalanche that buried New Hampstead from the jump.

On the ensuing possession, a pass by Phoenix quarterback Paul Seeley was batted into the air and picked off by Staffon Stanley inside opposing territory. Following a 25-yard catch-and-run by Kevin Thomas, Brunswick extended the advantage to 14-0 on a 3-yard scoring run by Chuckobe Hill.

Once New Hampstead got the ball back, it promptly went three-and-out, and the subsequent punt was blocked by Nick Gray — who also forced and recovered a fumble on the night. Brunswick took over at its 9-yard line after the block, and on the first play, Hill found the end zone once more.

Hill finished the game with 87 rushing yards and three touchdowns on just 11 carries. He also recorded a 28-yard catch. As a team, the Pirates rushed for 252 yards and racked up 391 yards of total offense to 305 yards for the Phoenix.

Trailing by three scores early, New Hampstead turned to Seeley, who entered the game as the Class 4A passing leader with 660 yards, to get the team back into the contest. The Phoenix drove 81 yards in 11 plays to score a touchdown and cut the deficit to 21-8 with 2:27 remaining in the opening quarter.

But New Hampstead never could slow Brunswick long enough to claw its way back into the game.

It took just eight plays for the Pirates to hit paydirt again when Simmons’ second touchdown of the half pushed the lead back to 28-8 with 11:21 in the second quarter. After a New Hampstead three-and-out, Brunswick tacked on a field goal.

The closest the Phoenix got to making it a one-score game came early in the third quarter. A 46-yard touchdown pass on a wheel route got New Hampstead to within 31-16 with 38 seconds until halftime, and upon getting the ball to open the second half, the Phoenix drove to just outside of the red zone with an opportunity to trim the deficit to a touchdown.

But despite three penalties on the Pirates, including a pair of defensive pass interference calls, the Phoenix turned the ball over on downs at its 28-yard line. Eight consecutive runs later, Hill completed his rushing touchdown hat trick to extend the lead back to 22 points.

Brunswick added two more touchdowns on runs from Jayden Drayton and Leon Charlton to cap off an impressive offensive display that saw the Pirates go the entirety of the contest without punting. Quarterbacks Sutton Ellis and Jeffery Waye split snaps with each contributed the team’s 139 passing yards.

“They both deserve opportunities,” Pender said of his signal callers. “They both work hard. Neither one real separates themselves in practice, so I’m still giving both opportunities.

“It’s worked for us all summer, and it’s working for us now. I’m not going to fix what’s not broken.”

The Pirates are rolling a month into the season, now with two victories over top 10 programs under their belts through three games.

“You keep up with the statistics — I’m just going to do one game at a time,” Pender said. “I’m going to enjoy the win tonight; it was a win against a very good football team. I think New Hampstead is a tough team. I think they’re going to do very well, but coming here in this environment, we’ve got a good environment here.

"We had a great student body. They were fired up. We played well, and we played physical. We were able to capitalize on that physical play, and we executed. It was a good night for us.”