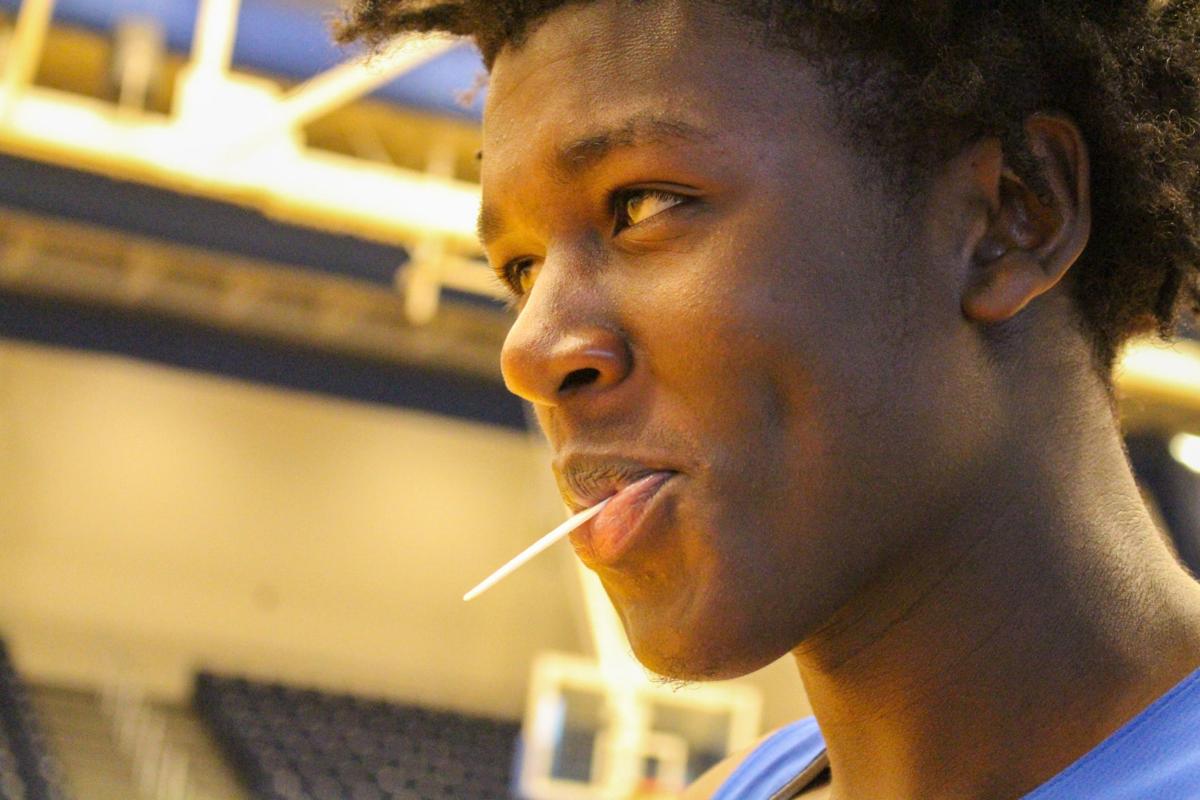 Brunswick basketball player Jaden Dunham begins to chew a piece of gum during practice on Thursday. 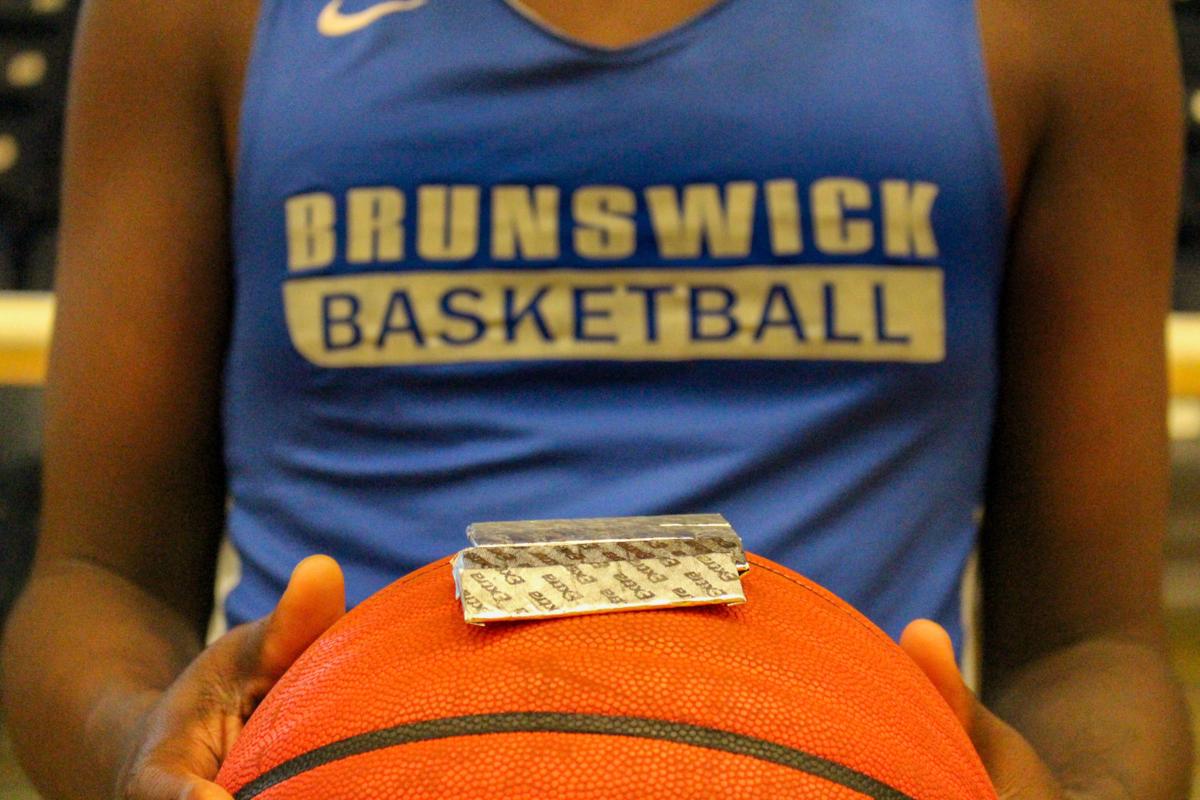 Jaden Dunham poses with a basketball and Extra gum. 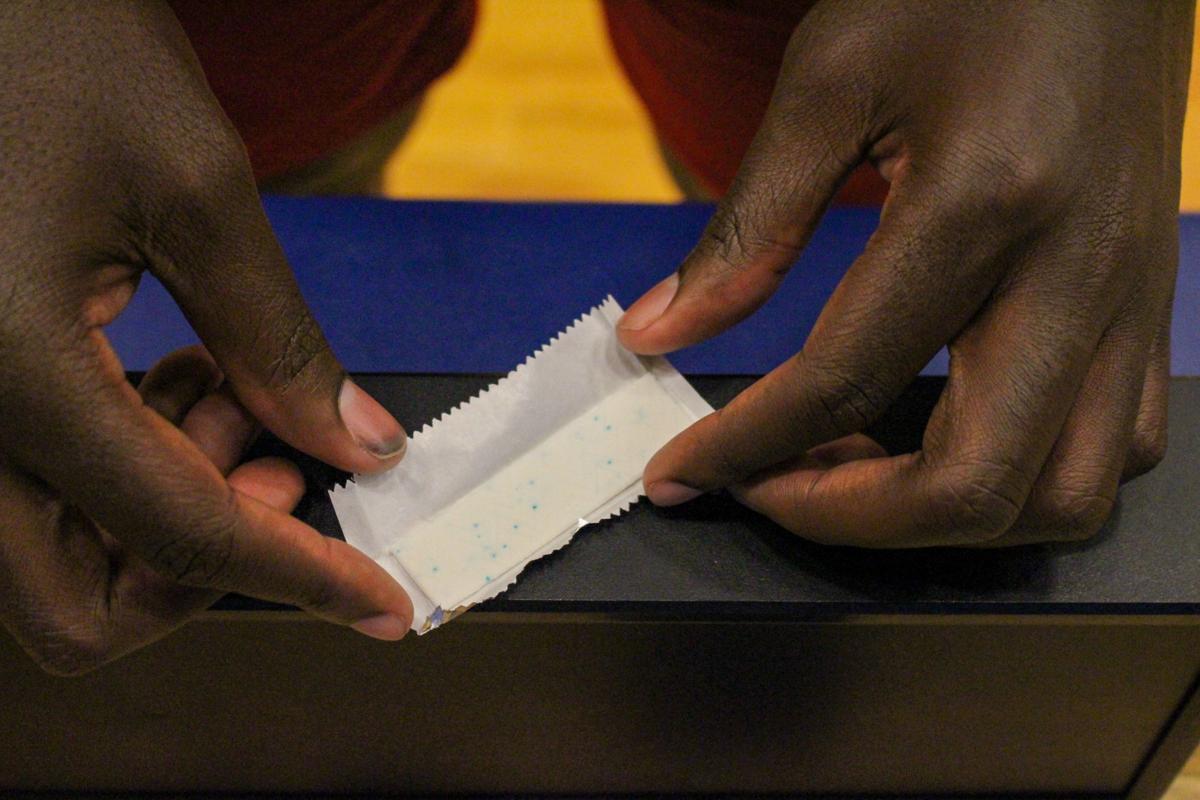 Jaden Dunham opens a piece of gum, showing part of his pregame ritual. 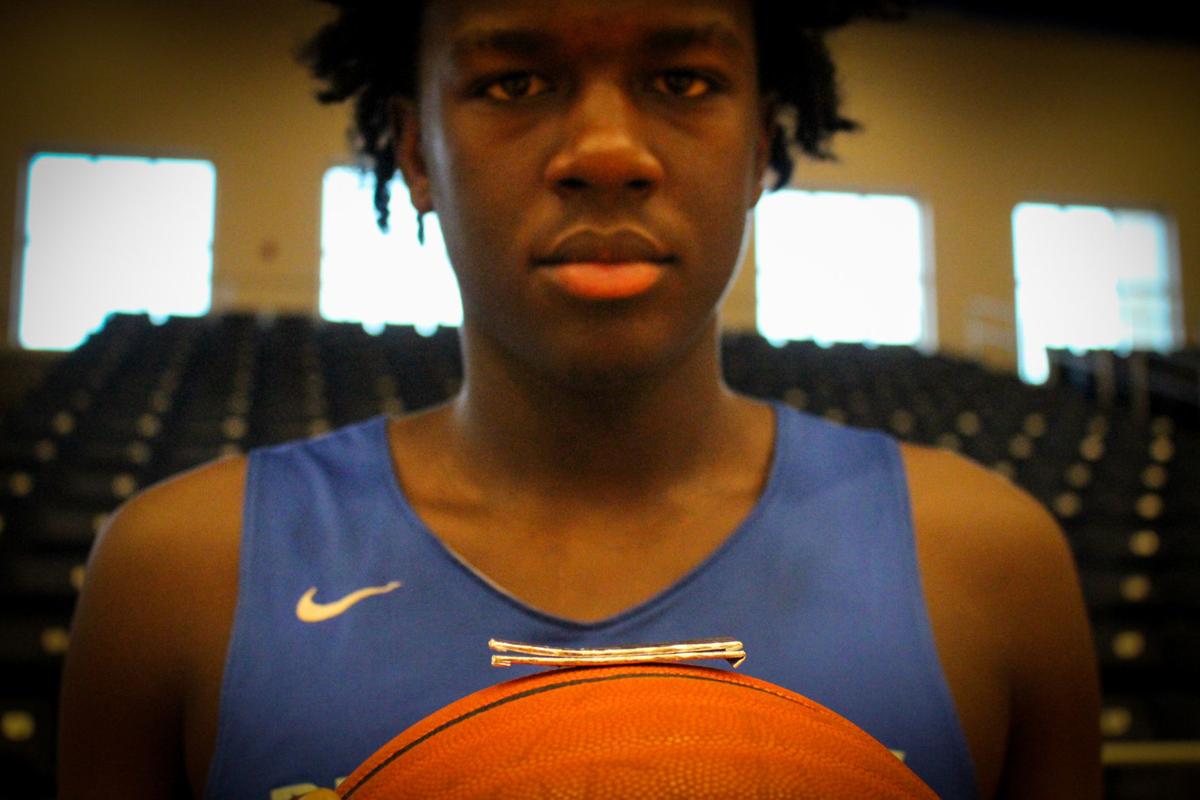 Brunswick basketball player Jaden Dunham begins to chew a piece of gum during practice on Thursday.

Jaden Dunham poses with a basketball and Extra gum.

Jaden Dunham opens a piece of gum, showing part of his pregame ritual.

After the starters get announced, the seconds tick slowly off the clock, and the game gets ready to begin, Dunham makes his way over to the scorer’s table. There he picks up a piece of Extra’s Watermelon flavored gum to ease his nerves, and now he’s ready to play.

This ritual started in his sophomore year at the home game against Glynn Academy.

“Gum keeps me from being nervous on the court,” Dunham said. “My sophomore year, when I was playing on varsity, I used to be nervous a lot. Then Ms. Charisse, our stat keeper, she was like, it’s ok, calm down. I saw she had gum, and my mouth was dry at the time, so I asked, may I have a piece of gum. I played good the first time I asked for a piece. Ever since then, I started chewing gum, and she reminds me each game. So every tip-off I go and get a piece.”

Dunham says doing this each game allows him to get rid of any nervous he has and helps stay focused on the game.

“It keeps me calm,” Dunham said. “It puts juice in my mouth, so I’m not nervous, and my mouth isn’t dry. It keeps me relaxed.”

Gum is just part of the senior’s game day routine he has. Dunham always has the same meal, listens to the same song and has things he does until it’s game time.

“Before we ever come back to the gym on game day, I go to American Deli and eat,” Dunham said. “It’s something we always do, and I always get a Philly cheesesteak and some fries. With teriyaki sauce on my fries. Then when we get back to the gym, we play music. We play Chief Keef’s ‘Faneto’ on repeat.

“Before tip-off, I wave at my grandma in the crowd. She sits in the same spot every game, and she always smiles at me. I got to wave at her, and I never forget to wave. I also like to wear Uggs on game day, the man Uggs. I have to wear them on game day.”

For home games, he goes one extra step, and that’s with his socks. Despite his lucky socks having red on them, Dunham said they make him comfortable on the court.

“Every home game, I wear Nike socks with red on them at the top,” Dunham said. “I wear them every game. You will never catch me in a different pair of socks. My coach gets onto me about it. I told them they were free, and he said not everything free is good, but that’s what gets me through the game.”

Dunham is a 6-foot-7, 210 forward that is a big piece to Brunswick’s success. As one of the seniors on the team, he knows that he has to bring his best. He’s averaging 15.9 points, 10.2 rebounds, and 2.7 blocks on the season. Dunham has scored 303 points and has tallied 53 blocks on the season.

“For me, this is my season. This is my best season so far,”Dunham said. “I have like four 20 point games. Last year I played good, but others were shining on the court. I’m one of the only seniors, so I have no choice but to step up and lead.”

Up next for Dunham and the Pirates will be two road games. The first will be a region game at Bradwell Institute today with tip-off set for 8:30 p.m. Brunswick will head to Coffee County on Saturday for a non-region game and redemption after falling short to the Trojans last weekend.