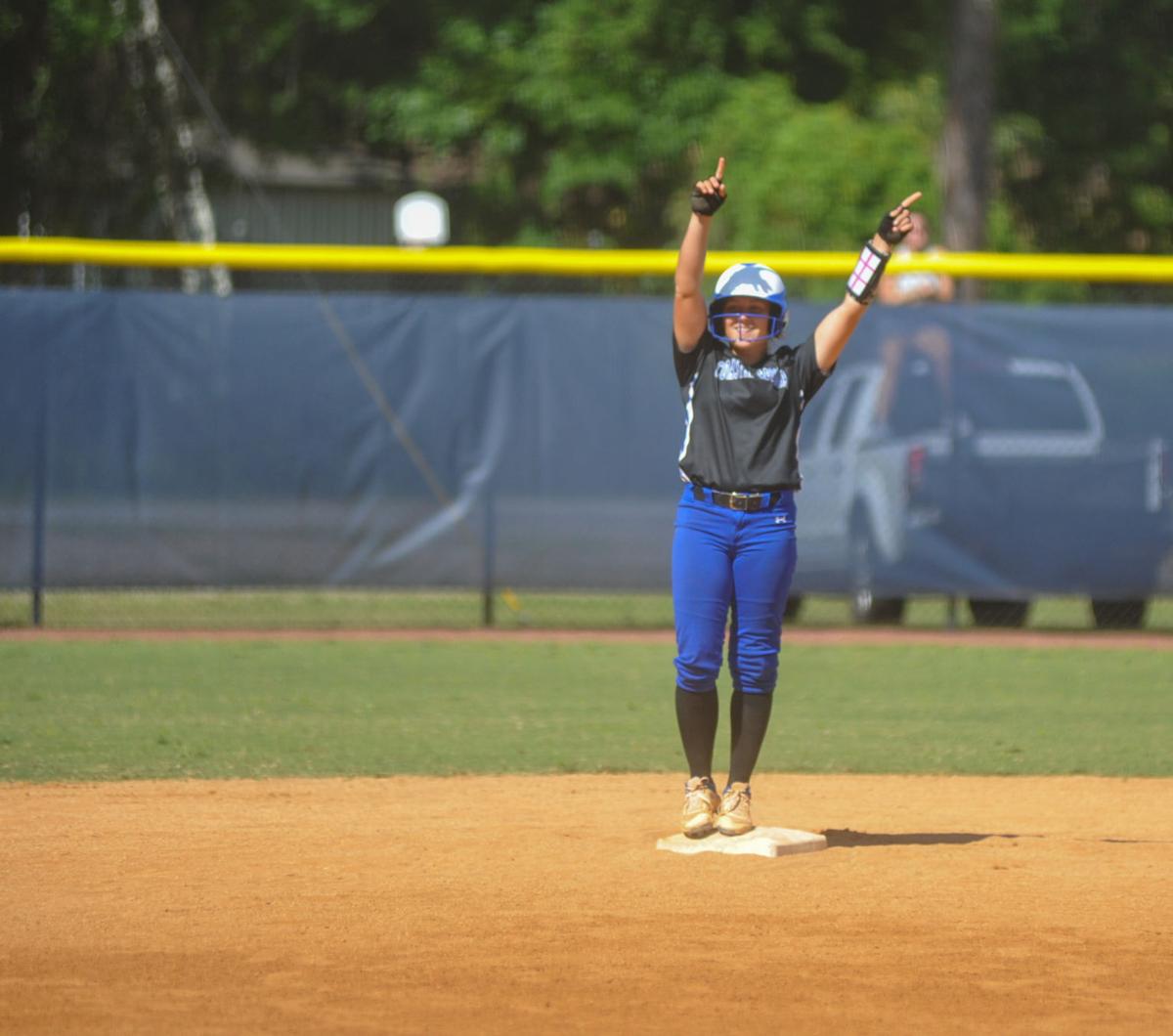 Coastal Georgia's Bryce Peacock celebrates a two-RBI double against Warner this past weekend. 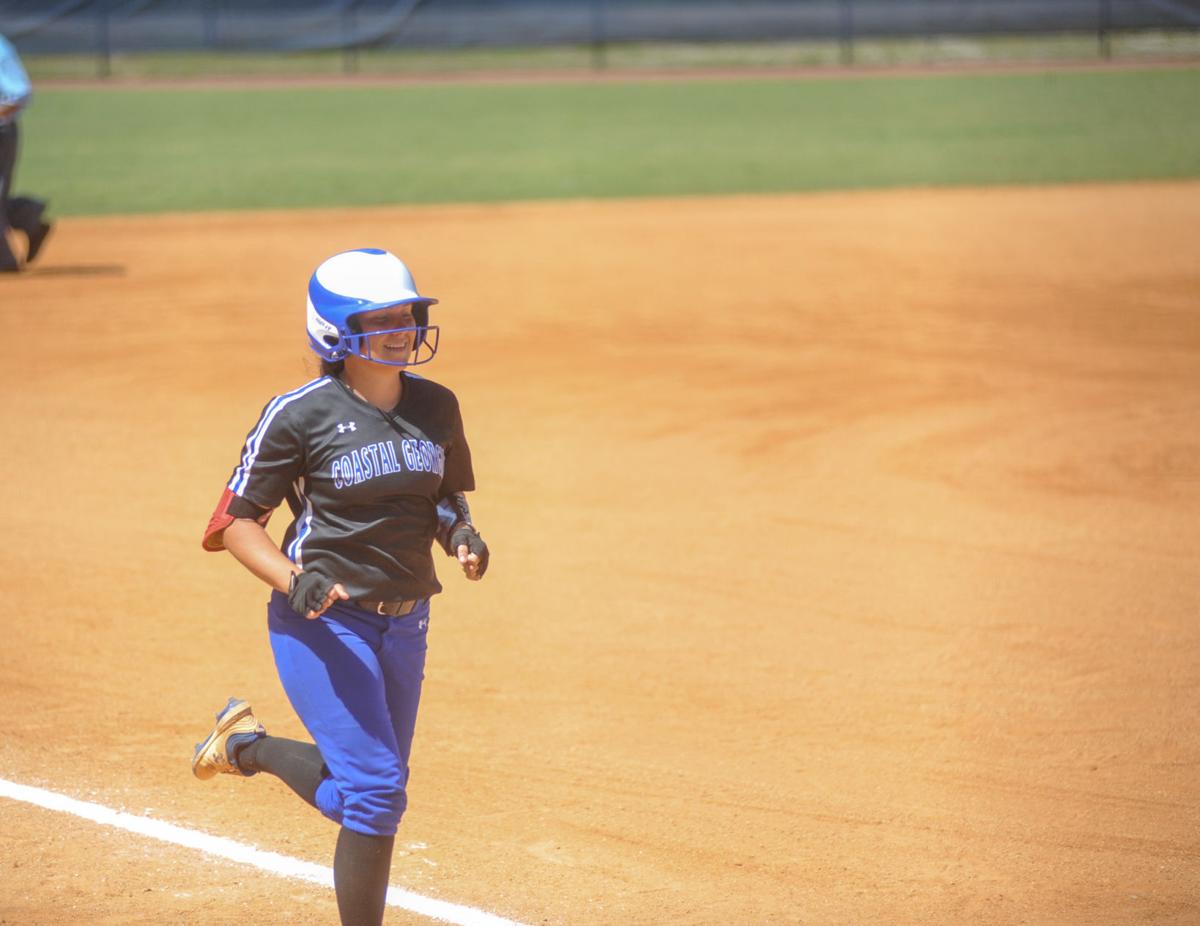 Bryce Peacock smiles as she approaches home plate after hitting her sixth home run of the season on Saturday.

Coastal Georgia's Bryce Peacock celebrates a two-RBI double against Warner this past weekend.

Bryce Peacock smiles as she approaches home plate after hitting her sixth home run of the season on Saturday.

Coastal Georgia’s softball team closed out the regular season on an eight-game winning streak as the Mariners swept Warner University on Saturday to earn second place in The Sun Conference standings.

The Mariners won Game 1 3-1 and Game 2 4-3, with freshman Bryce Peacock recording four RBI in that second game to secure the win.

“All these seniors have had great careers and helped us win a bunch of games,” said Coastal coach Mike Minick. “So we were hoping we’d do good for them. We came out against the 19th ranked team in a country and beat them twice. We’re just staying hot, and I’m really excited.”

Coastal hasn’t lost a game since April 20 and according to Minick, there have been some fundamental changes.

“Our pitching is better, and we’re hitting the ball better than we were earlier in the year.”

One of those people that have contributed is Peacock. She leads the team with a .405 batting average and six home runs, including the sixth on Saturday.

She has 38 runs on the season, 47 hits, 10 doubles, two triples, 24 RBI and 25 stolen bases. Peacock is just one of the women who have shown up the last eight games, but her pitching and 4 RBI Saturday led the team to keep that streak alive.

“She’s a pretty good freshman, isn’t she? I mean, she’s done that for us all year,” Minick said. “She’s had a great year. She pitches well when she gets the chance. She’s just so clutch for us, and we’re so excited to have her.”

Peacock said she was nervous about pitching on senior day after Bowen couldn’t play due to injury, but she settled in as she threw 6.1 innings, allowing three runs on four hits and striking out four.

“I was so nervous,” Peacock said. “I was like, ‘OK, just pull yourself together. We’ll get through this.’ I pitched really well, so I was very proud of myself.”

Then you look at her work at the plate, and it’s steadily improved all season long.

“So every time I go into the batting cage, I’m usually working with my dad or coach Terry just trying to get my swings in and out,” Peacock said. “Usually, my home runs or any good hit usually comes from when I’m down in the count. I try to work hard in the batting cage to get my swings good. It helped me this week, especially in these two games.”

While she isn’t the only one who’s helped lead the team to these eight straight wins, she said it was an entire team effort. Even though it was the second time Coastal saw them for three of the four teams, they found ways to defeat them and keep that momentum.

“We just knew like the pitchers were going to be tough, but we have hit a lot more,” Peacock said. “We focused more on our hitting, and we’ve done a lot more live at practice. Really and truly what we’ve done, we came together as a team. We started making more of the 50/50 plays, diving plays, and making the big outs when we needed them. So I’m really proud of my team.”

With that sweep, the Mariners became the Sun Conference regular-season runners-up and will be the second-place seed in the conference tournament. This momentum is coming at the right time for Coastal, and a first-round bye will give them time to sit on it before taking on their opponent in the second round next weekend.