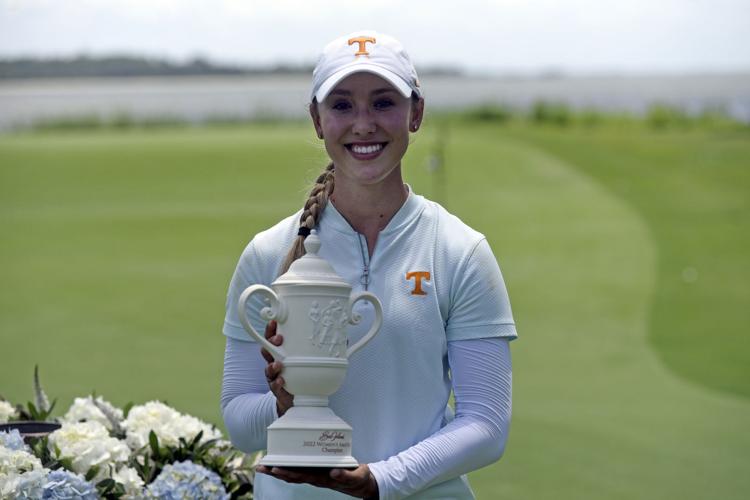 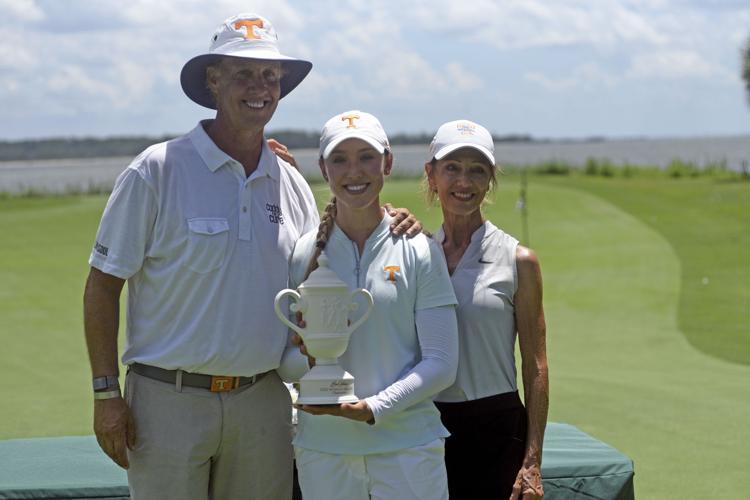 Kayla Holden and her parents smile with the Sea Island Women's Amateur trophy. Holden shot 2 under for the tournament to claim hold of the title. 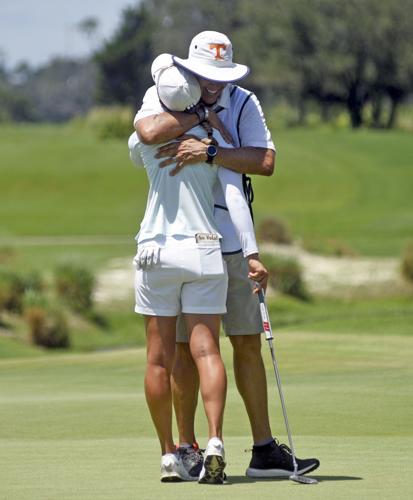 Kayla Holden hugs her dad after sinking the winning putt at the Sea Island Women’s Amateur on Thursday. 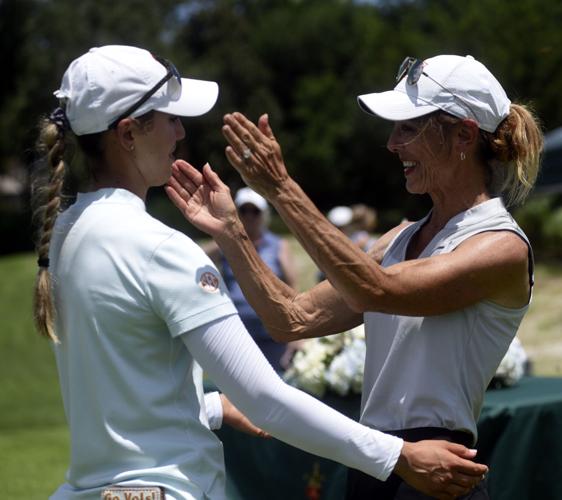 Kayla Holden and her parents smile with the Sea Island Women's Amateur trophy. Holden shot 2 under for the tournament to claim hold of the title.

Kayla Holden hugs her dad after sinking the winning putt at the Sea Island Women’s Amateur on Thursday.

Every shot counts in the game of golf, and on the final day of the second annual Sea Island Women’s Amateur event, it stayed true.

Two shots back from Patterson to start the final round, Holden caught a hold of her future teammate on the fourth hole after consecutive bogey’s by Patterson.

Staying even keeled with her dad on the bag, Holden knew she had a chance to win the tournament.

After shooting 1 over on the front nine of Seaside, Holden shot 1 under on the back nine to bring herself back to even par for her final round.

Staying afloat at the top of the leaderboard with the defending champion Hannah Levi, Holden had a chance to claim victory on the 54th hole.

Forced into a three-way tie between Levi, Holden, and Emma Schimpf as they walked the 18th hole, Holden sat on the fairway and watched the two paired in the group ahead take their final shots of the tournament.

“When I got to 18, yes I knew Hannah, Emma and I were tied,” Holden said after her win. “I knew I needed to do something special to either pull it off or at least get it to a playoff.”

Schimpf sent her drive into the water, forcing her to attack the green for a chance to get a possible par putt to stay alive in the three way tie. As she sent her shot off the green, Schimpf stayed calm as she lined up for a pitch shot that would need to be holed out for something special.

Only seeing her chip shot reach the top of the fringe, Schimpf slammed her club in frustration, realizing her opportunity to claim the title to be out of reach.

Levi’s approach shot narrowly missed the green, forcing her to putt from a long distance to put pressure on Holden in the group behind her. Only grabbing a par on her final hole, Levi hugged her mom as the hopes of a possible playoff and chance to repeat were still on the table.

Then came the clutchness of Holden.

With her second shot being 165 yards away, Holden took her 6-iron out of her Lady Volunteers bag and drilled her shot to six feet from the hole.

“I had been feeling really good with my driver all week, and I’ve been hitting it solid,” Holden said of her 18th hole shots. “My driver is my strongest club in my bag. I just picked my target, went through my routine and executed. My second shot I hit 6 iron, and it was just perfect. As soon as it came off the face, I just knew it was going to be a good shot. And sure enough it was and I was able to make the putt.

As the crowd gathered around the 18th at Seaside clapped at a fabulous shot, Holden stayed calm as one putt could change her young golfing career.

Letting Patterson and Peter finish their putts, Holden walked around the green with her dad behind her to read the green and see what spot was ideal for the winning putt.

Holden stepped up to her ball and tapped in her 6-foot putt into the bottom of the hole for the winning putt.

Grabbing her ball from the bottom of the cup, Holden hugged her dad, who knows her game the best, and supported her from the start. Making the rounds to say thank you with Patterson and Peter, Holden walked off the green and into her mom’s arms to embrace the moment of capturing the most important win of her amateur career.

“It’s always amazing to have my parents come to watch me play,” Holden said. “They come to every single college event that I play in. Having them here and having them watch just made it that much more special. Having my dad caddy for me is always a special time and fun to get it done together.

“My dad knows my game more than anyone else and I trust him with all of his experience and what he knows. He was able to help calm me down and help me play smart golf today and take things one shot at a time.”

Before walking off the green and making her way to the scorers table to make the win official, Holden said she was excited to celebrate the win in true style, by going to Buc-ees.

“Last night actually,” Holden said of her Buc-ees celebration choice. “We were in the hotel room and I said to my parents ‘If I win tomorrow, we are going to Buc-ees and I’m getting anything that I want.’ I will see what I can get.”

Hoping to maybe find her favorite candy, the cherry sours in St. Augustine, Holden will use the last few weeks of the summer to relax at home before starting her junior year at Tennessee.

“This was really special,” Holden said as she looked ahead to next years season. “I’ve been working really hard for a long time and it’s really cool to see the hard work pay off and definitely gives me a lot of confidence heading into the season and really looking forward to our season and how we play as a team.”

Organizations working to better the lives of youth and families in Glynn County were celebrated Wednesday and given funds to support their mission.