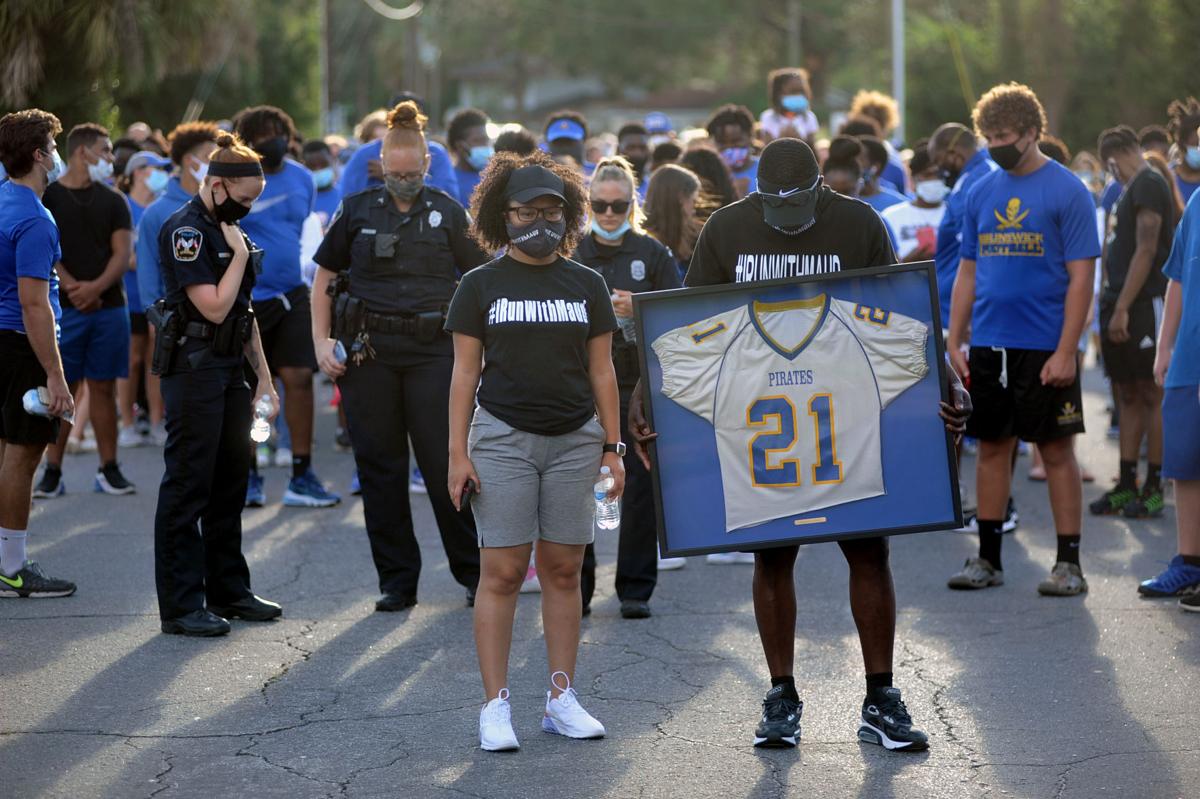 Ahmaud Arbery’s Brunswick High football jersey is displayed during a moment of silence at during the school’s Unity March. 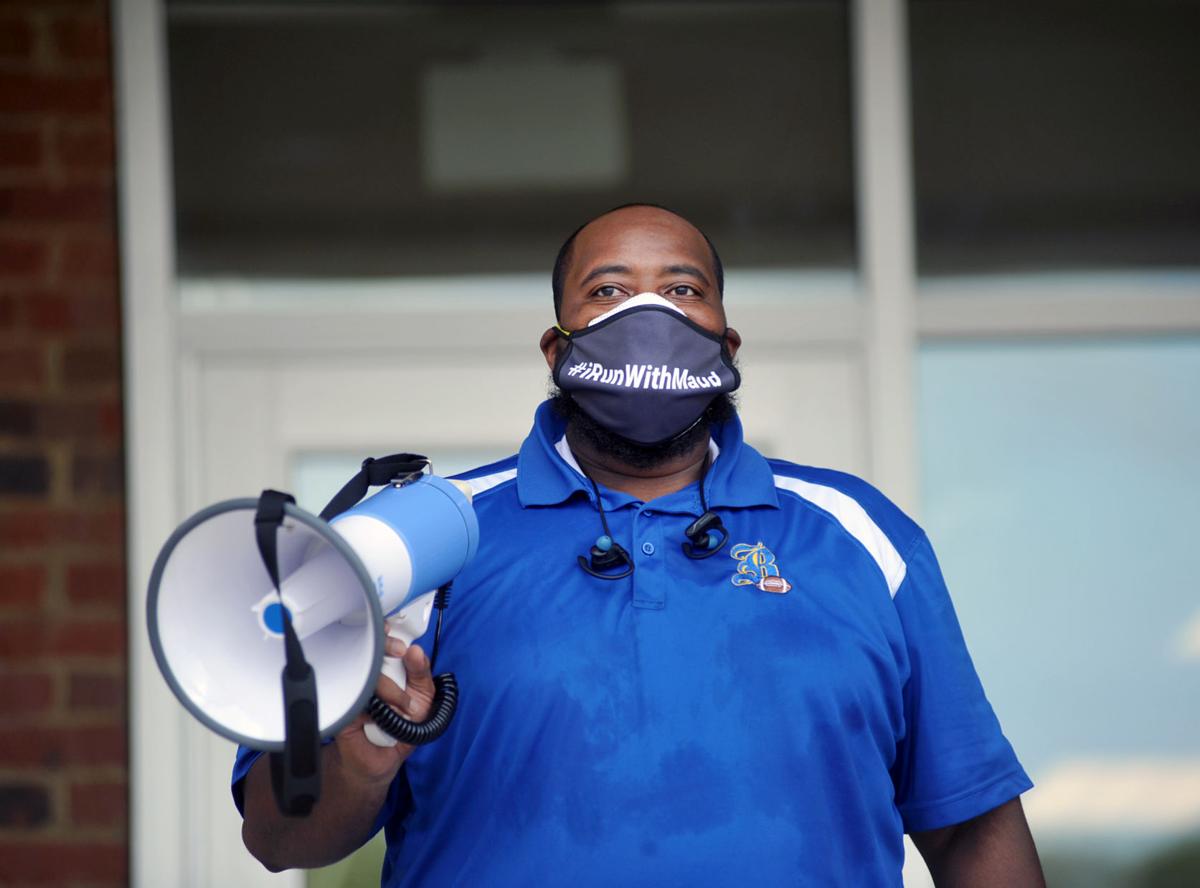 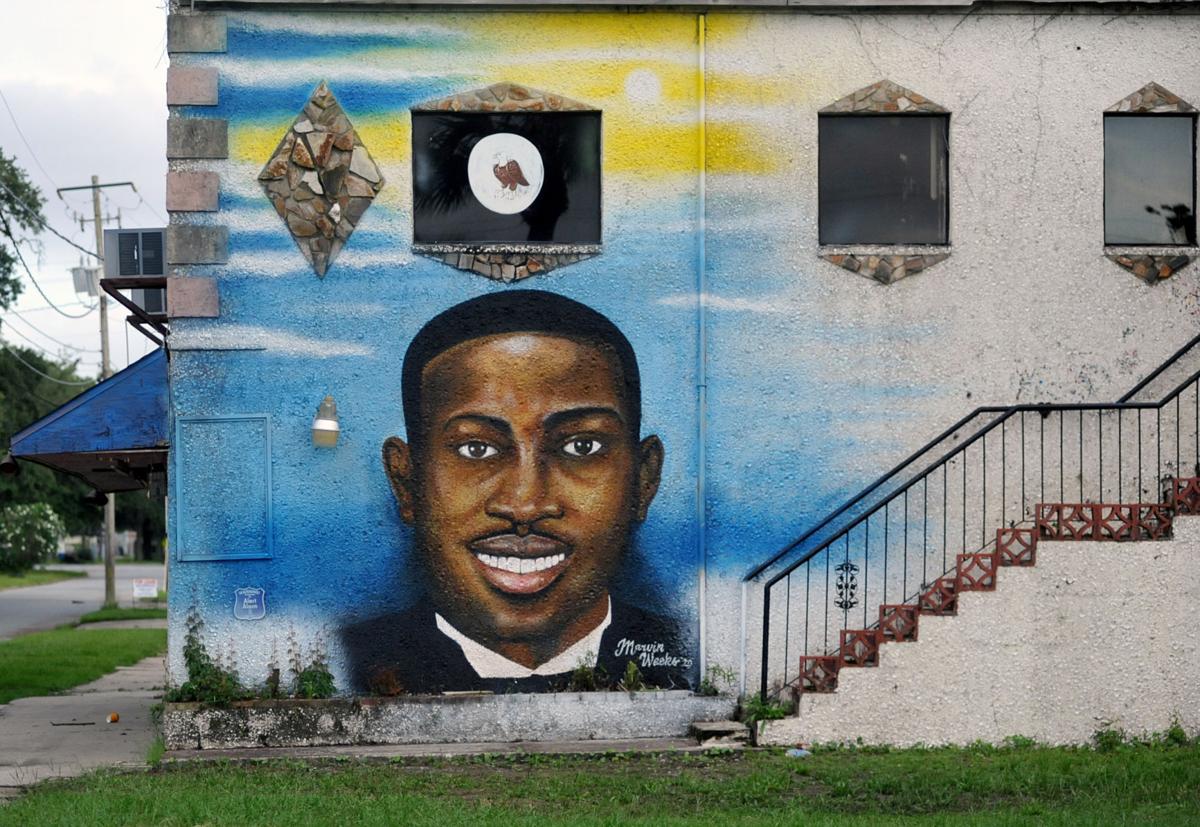 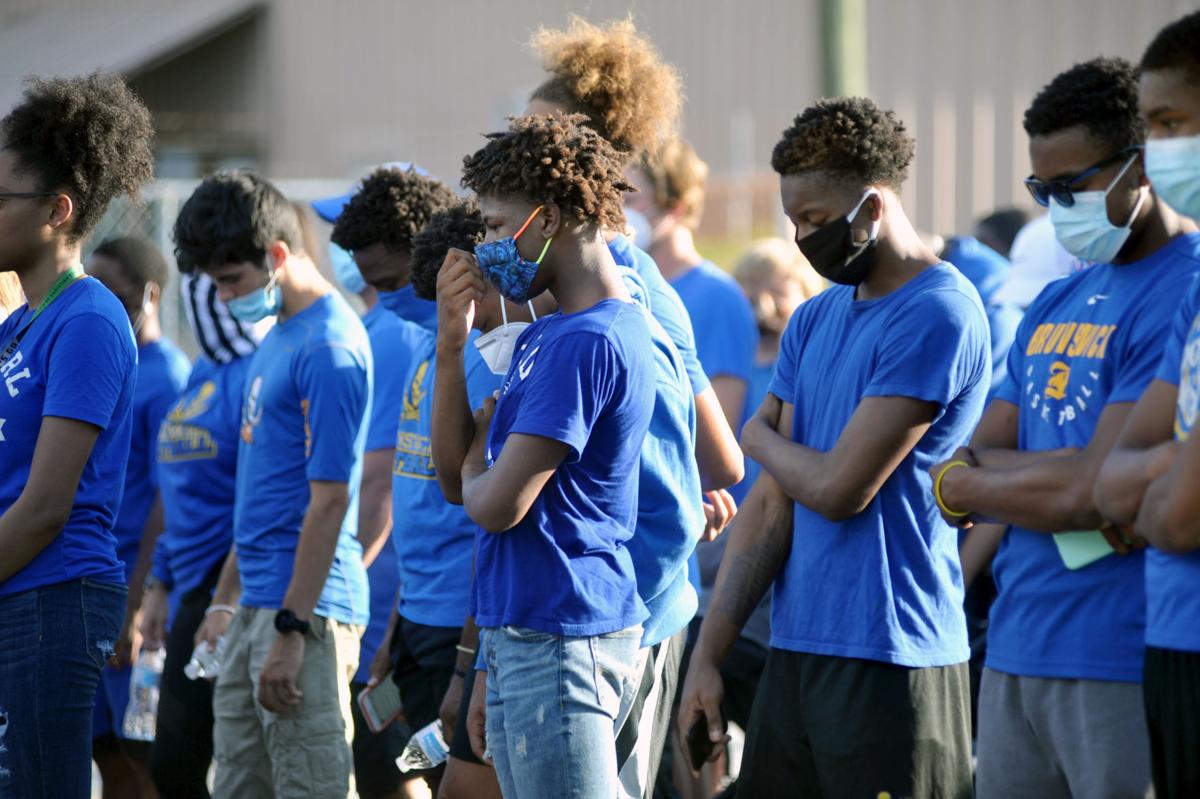 Brunswick High football players bow their heads during a moment of silence during Tuesday's Unity March.

Ahmaud Arbery’s Brunswick High football jersey is displayed during a moment of silence at during the school’s Unity March.

Brunswick High football players bow their heads during a moment of silence during Tuesday's Unity March.

It has been one year since Ahmaud Arbery was gunned down by a father-son tandem on a Sunday afternoon in Satilla Shores for having the audacity to jog through the winding streets of the neighborhood.

Occurring just months before nationwide protests were sparked in the wake of more senseless killings of unarmed Black citizens, Arbery’s execution was a tragedy that could have torn the community apart.

Instead, with the help of the 2.23 Foundation, Ahmaud’s death has united millions across the globe hoping to prevent a similar catastrophe from ever happening again. One tactic the organization has employed is the Finish the Run campaign set to begin Feb. 23 — the one-year anniversary of the killing.

“We want to be able to do what Maud didn’t get a chance to do that day, which is to leave Satilla Shores,” said 2.23 Foundation co-founder John Richards. “As we leave, we want to continue that trek. We know it’s a marathon, not a sprint in looking for justice and to bring these men to trial and get convictions, but also, how can we prevent this in the future?”

Locally, Richards, a Brunswick native and social justice advocate, and the 2.23 Foundation will hold a candlelight vigil and a memorial walk through Satilla Shores beginning at 5:30 p.m.

But Ahmaud’s story has long since outgrown the borders of Glynn County.

No arrests were made immediately following the fatal shooting, and the case bounced from one district attorney’s desk to another until a video of the incident was released May 5 and subsequently went viral.

Forty-eight hours later, the Georgia Bureau of Investigation made the first arrests in the case — the same day Jason Vaughn, another 2.23 co-founder and one of Arbery’s high school football coaches, went on Facebook Live and uttered the now famous words: I Run With Maud.

The first virtual run was held May 8, on what would have been Arbery’s 26th birthday, with the goal of keeping his story and the pursuit of justice alive.

As it turned out, Arbery’s friends and family members weren’t the only ones running with him. More than 100,000 videos with messages of support were posted May 8, and the #IRunWithMaud hashtag was imprinted more than 800 million times on social media platforms.

It seems as if anyone from any walk of life can see themselves in Ahmaud’s shoes.

Oprah Winfrey typed out an emotional Instagram post. Ellen DeGeneres called for justice on Twitter. Charles Barkley and Shaquille O’Neal gave their thoughts during the NBA on TNT’s coverage of the Western Conference Finals. Tom Brady and The Players Coalition penned a letter to Attorney General William Barr requesting an investigation into Arbery’s death.

Vaughn believes it was the nondescript nature what Ahmaud was doing when he was hunted down that has led to the outpouring of sympathy.

“I realized that a lot of people relate to Maud because so many people go out for a walk or a jog just to exercise,” Vaughn said. “And especially women have been in situations where they feel extremely vulnerable at a park with someone following them or down a trail when they felt uneasy. So they’ve felt the vulnerability of being out doing something you love, and then somebody comes to interrupt your life and creates a dangerous situation.

“People related to what happened to Maud because they’ve had that very real fear before.”

But there have also been various running clubs that have told the 2.23 Foundation what happened to Ahmaud has forced their communities to reckon with privilege they’ve taken for granted in feeling free to run through neighborhoods without concern, sparking larger conversations.

Similar conversations have been held with exercise tracking network Strava and the running division of The North Face as virtual runs continued to be held the 23rd of each month.

The next step for the 2.23 Foundation was figuring out how to best turn words into actions. The Finish the Run global campaign could be just the solution.

Runners can register for the virtual run at https://events.elitefeats.com/223run through March 3. More than 3,500 people had registered for the run as of Monday evening.

The entry fee is $23 with all proceeds going directly to a scholarship fund for local students of color pursuing careers in social justice.

“As we’re going through the summer, our audience is growing, trying to figure out how we can continue to hold local officials to account, we did get to a point where we’re in firefighter mode — how can we prevent this from happening again,” Richards said. “What kind of things can we do programmatically, what kind of things can we do to help prevent something like this from ever happening again. One of the things that really came up, especially with Coach Vaughn as a high school football coach and teacher; Demetris (Frazer) is a college athlete and a graduate of Brunswick High School, we felt like the natural connection was to young people, and being able to equip them for advocacy in the future.”

The hope is that in removing the financial barrier to college for students in Brunswick, where more than 34 percent of the population was below the poverty level in 2019, more will have the opportunity to become prosecutors, policy makers, or public officials.

“We thought it was important to focus on those areas because those are what really failed us in the wake of Maud’s murder,” Richards said. “We wanted to make sure that we were looking to develop leaders to fill those offices so that we don’t have to deal with that again.”

A year after Arbery’s untimely demise, the city of Brunswick is still healing, but steps have been taken in the right direction.

One of the biggest was the ousting of Brunswick Judicial Circuit District Attorney Jackie Johnson, who recused herself from the case once it was discovered that one of the suspects worked as an investigator in her office.

County officials claimed GCPD officers were told by Johnson’s office not to make an arrest at the scene of Arbery’s death.

Johnson denies the allegations, but she was voted out of office six months later.

“Being able to get Jackie Johnson out of office was a very huge deal,” Richards said. “The rest of the county was 65-35 Republican thereabout, and that was the one seat that overwhelmingly voted to remove her from office. It said a lot about our city and about the county, and that was: We’re not going to stand for this anymore.

“It’s unfortunate, and we’re still living that pain through what happened to Maud; it also served as a spark for a lot of people, and it’s a spark that won’t go away. I think that over the next several years, you’re going to continue to see that advocacy.”

There’s plenty of reasons to believe the movement brought on by Ahmaud’s tragic passing is here to stay. We’re going to see a better Brunswick because of it.