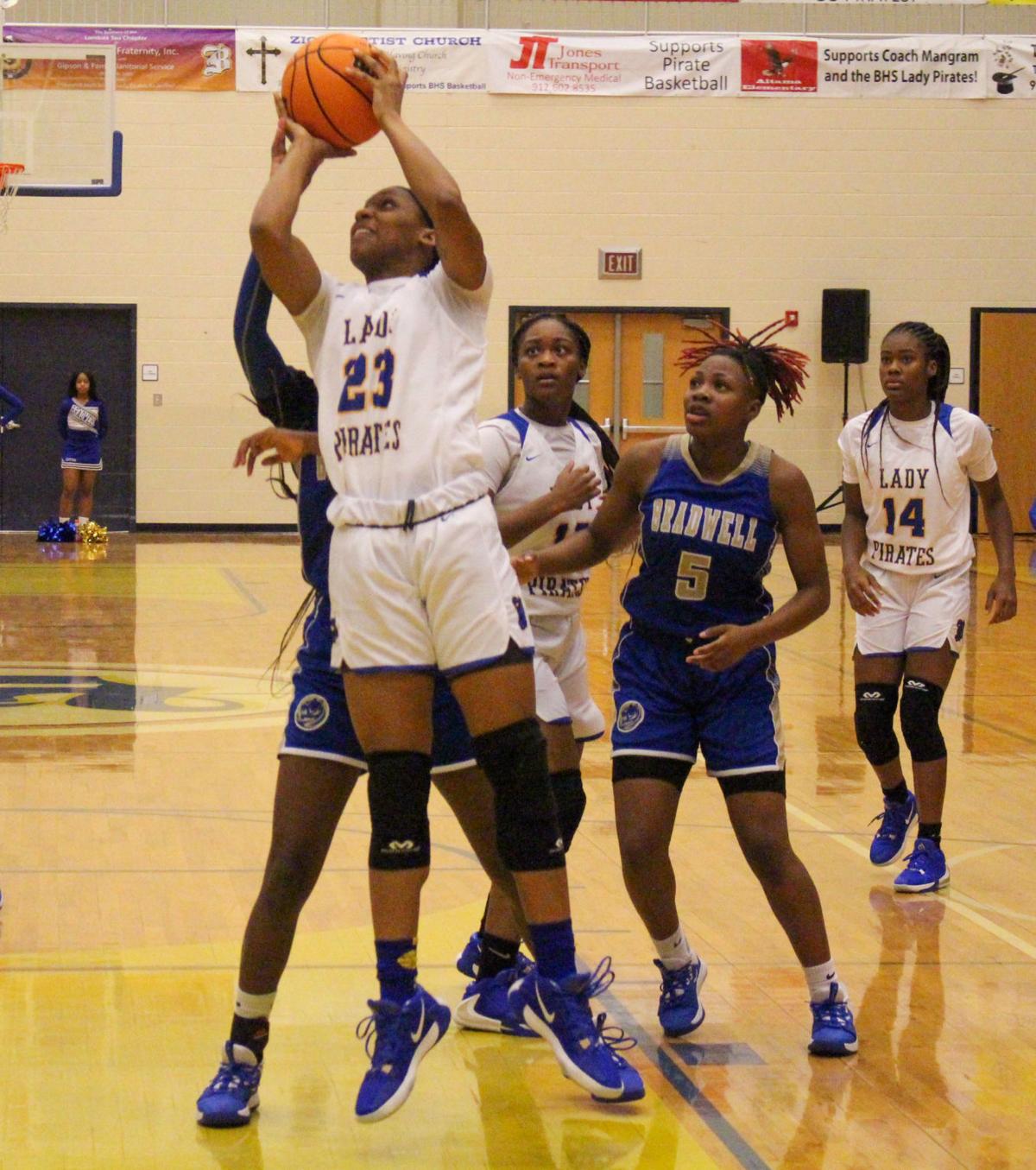 Brunswick High basketball player Makaila Brown pulls down a rebound and goes up for the basket against Bradwell on Friday. 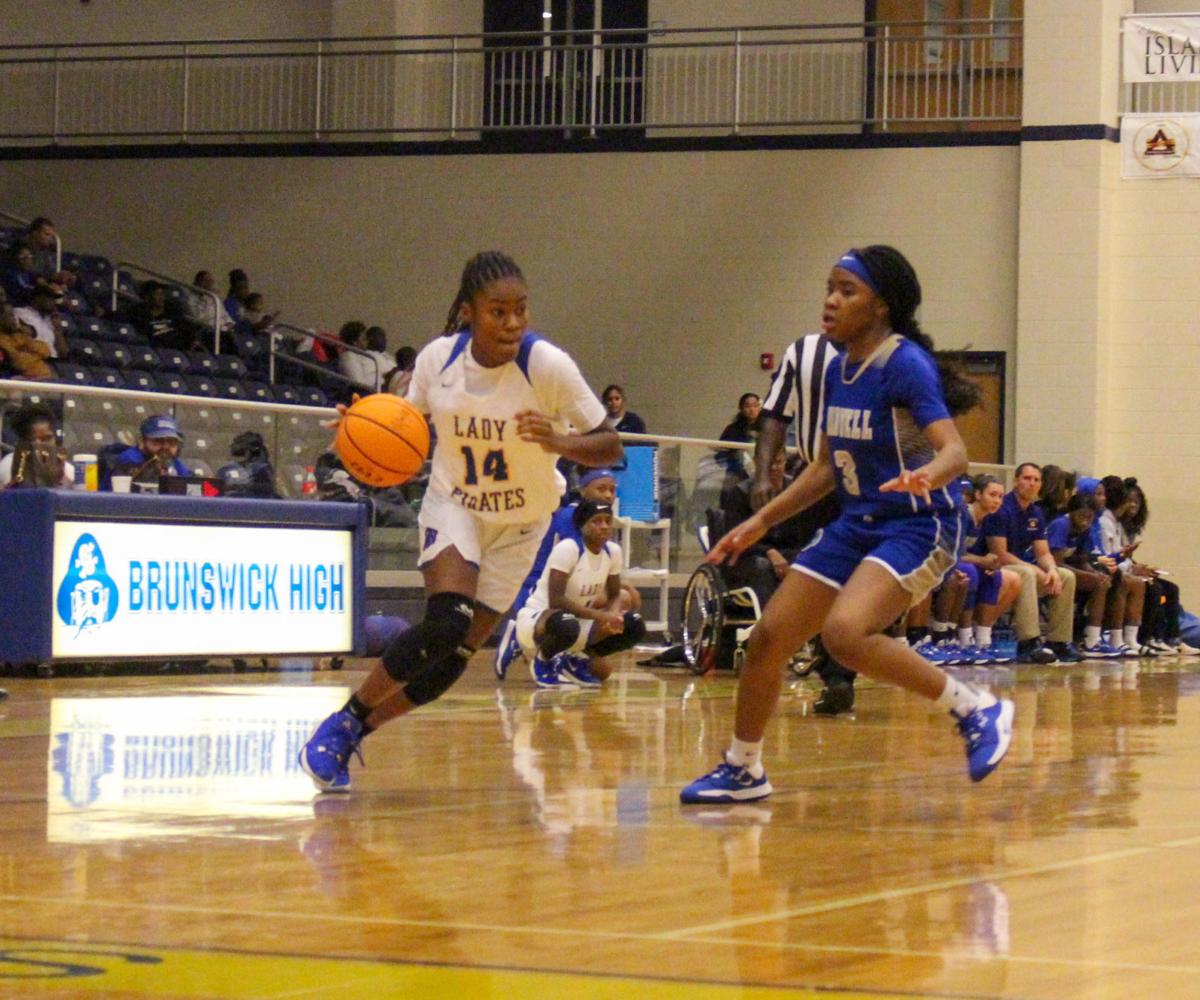 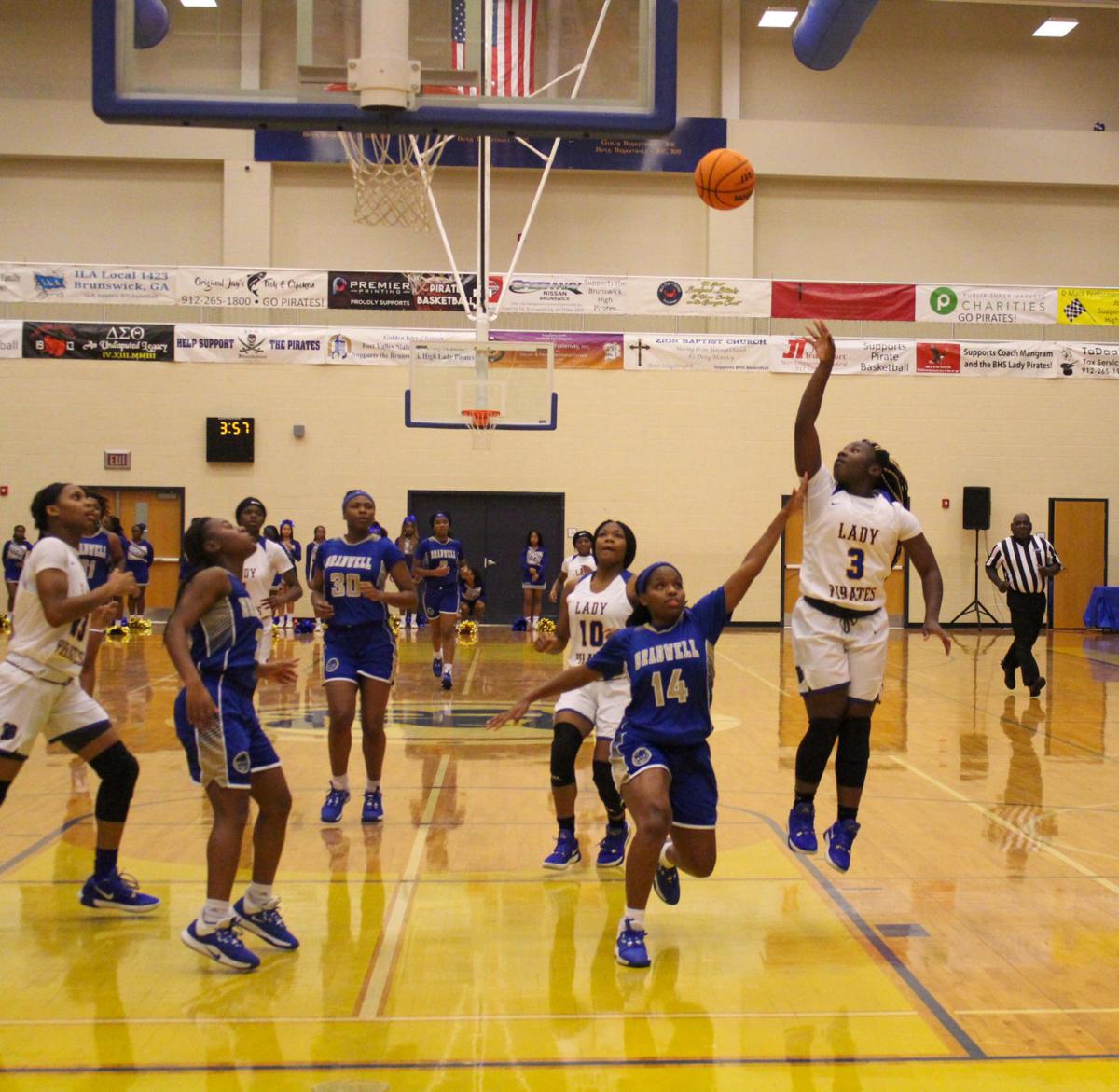 Marquesia Heidt pulls up to shoot a floater against Bradwell on Friday night. 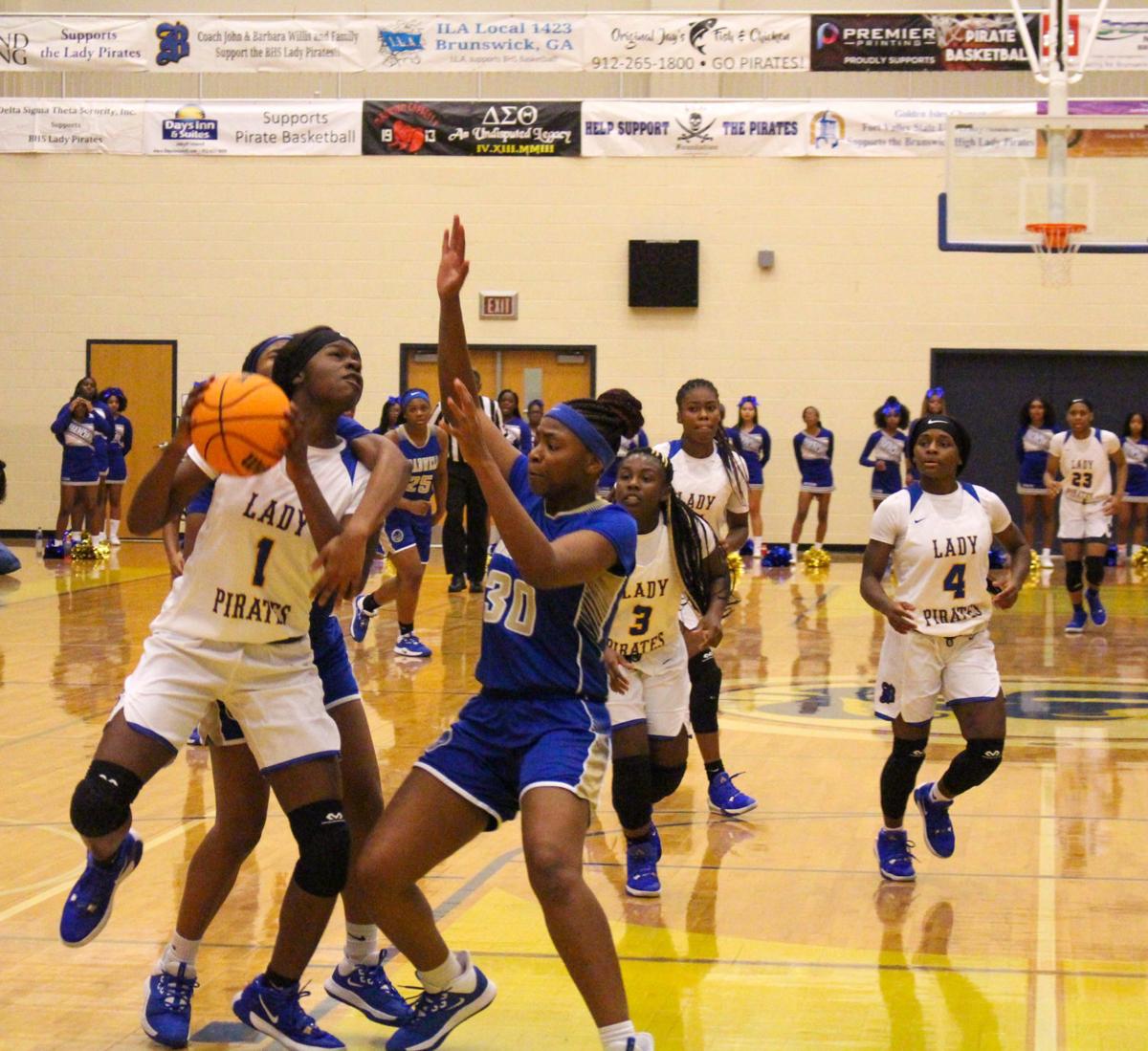 Brunswick High’s Keya Daniels drives to the basket. Right, Glynn Acadmey’s Zoesha Smith gets set on defense during a game this season. 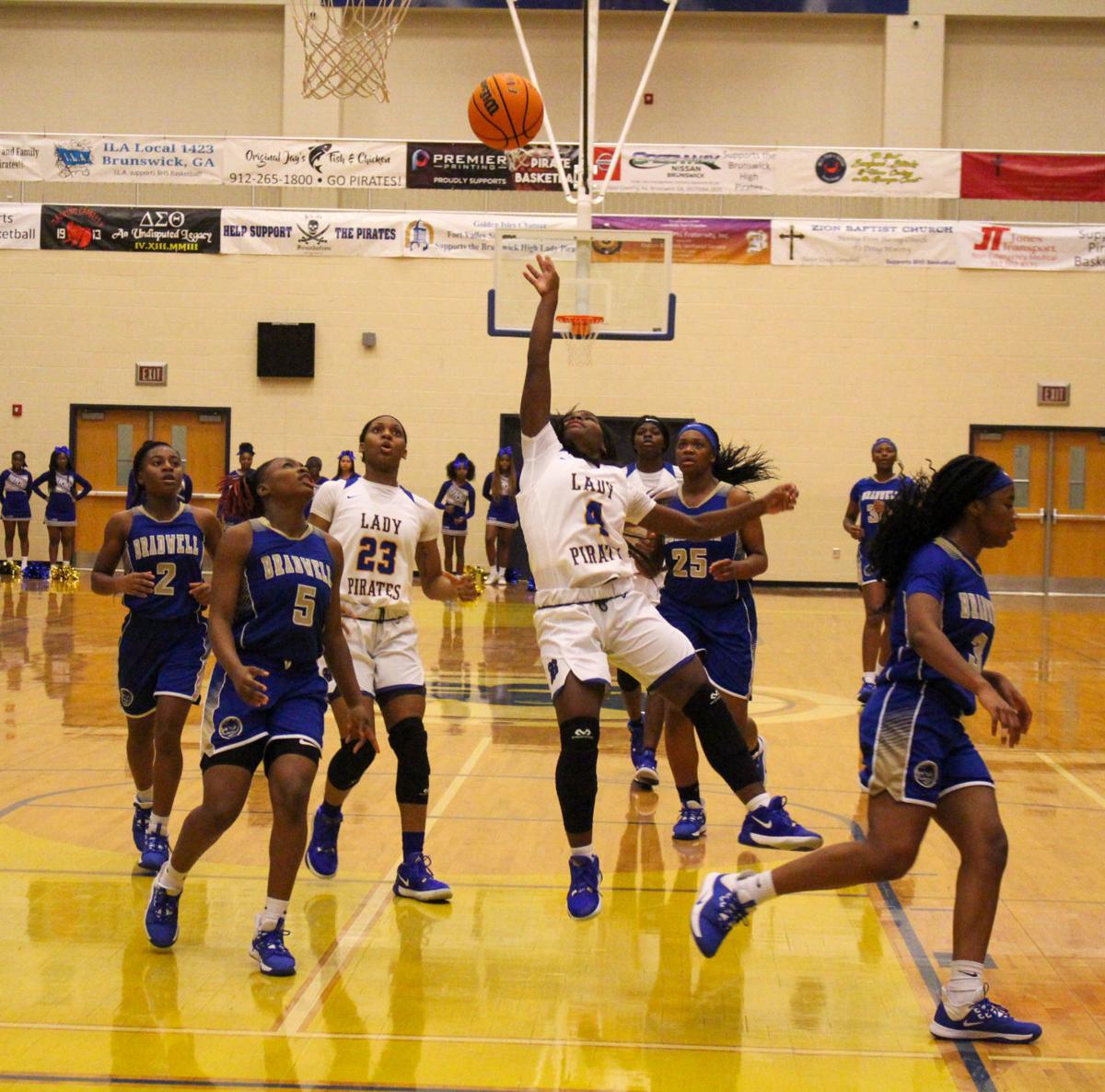 Jaliyah Howard shoots a layup against the Bradwell Tigers on Friday.

Brunswick High basketball player Makaila Brown pulls down a rebound and goes up for the basket against Bradwell on Friday.

Marquesia Heidt pulls up to shoot a floater against Bradwell on Friday night.

Brunswick High’s Keya Daniels drives to the basket. Right, Glynn Acadmey’s Zoesha Smith gets set on defense during a game this season.

Jaliyah Howard shoots a layup against the Bradwell Tigers on Friday.

That win gives the Lady Pirates their fourth straight win.

Brunswick’s coach Maria Mangram said that the team started hot against the Tigers but cooled off, and they cannot do that.

She said that the team played hard, but they need to become a little more consistent. Mangram said that they’re getting better, but need to work on some things.

“We work fundamentals every day, in class, we work it, and in practice, we work it,” Mangram said. “We work ball handling every day, I try to put them in game-type situations, and we do situational scrimmages. It’s taking what you know and putting it in the game.

“We have to work on our basketball IQ too. It’s not the highest of where I want it to be. We’re gradually getting better. We’re winning games, so as a coach, you’re happy with a win, even the ugly ones. But tonight was a big one because it’s a region win. Those are more important than any other games.”

The Lady Pirates struggled at times during the first half after the strong start but never allowed themselves to get out of the game. At halftime, Bradwell held a small 26-22 lead over the Lady Pirates.

Brunswick came out strong in the third quarter, especially Keya Daniels and Makaila Brown. These two lit up the court, and both finished the game with double-doubles.

Brown led the team with 16 points and 12 rebounds and only played 21 minutes. At half time, she only had two points, so she exploded on the court in the second half, which was exactly what Brunswick needed.

Down the stretch, Bradwell couldn’t stop her or Daniels. They both were huge parts of the win on Friday.

Mangram said that it’s important period to be able to do that, especially from Brown. However, she wants her to do it for a full game and not just one half.

“If she would do it out of the gate, then the games wouldn’t be close, but we don’t do a good job of that,” Mangram said. “I mean, we did jump out on them, but then we relaxed. They will gut someone and then take the knife out as opposed to gutting them and cutting them deep. That’s our mentality. We are very nice.”

Daniels was close behind her with 15 points, 10 rebounds, and five steals. She was all over the court and played hard. Daniels was able to force mistakes and make plays on both sides.

Mangram said a win is a win, but she wants them to not make it so hard on themselves moving forward.

“I tell them, high school basketball is a game of runs, you kind of have to get the momentum at the right time. Also, it’s about making free throws and layups, and we just struggle with that,” Mangram said. “This is my 11th year, and for the life of me, I don’t understand how you miss. We practice it every day. We run sprints, and we have to get so many by a certain time. Like we do all that, and we do it in-game time situations in practice, and we still can’t put the ball in the hole. I mean it’s a region win, and we will take it. We just put in too much work for them not to be able to reward themselves.”

Brunswick’s varsity boy’s team also defeated Bradwell on Friday night 64-40 to earn its fourth win in a row as well.

Tyrease Jones was the leading scorer for the Pirates with 12 points.

Jaden Dunham helped out on both the offensive and defensive side of things as he scored nine points, six rebounds, five assists and had two blocks.

Up next for the Pirates is a game against Beach High today with the girls’ tip-off slated for 6 p.m. Both them and the boy’s team will take on the Bulldogs at home today after the JV squads.