Sign Up
Log In
Purchase a Subscription
You are the owner of this article.
Edit Article Add New Article
You have permission to edit this article.
Edit
Welcome, Guest
Home
FULL MENU
News
Life
Sports
Obits
e-Edition
Classifieds
Jobs
Events
Subscribe
doc. 2021/2022
1 of 8 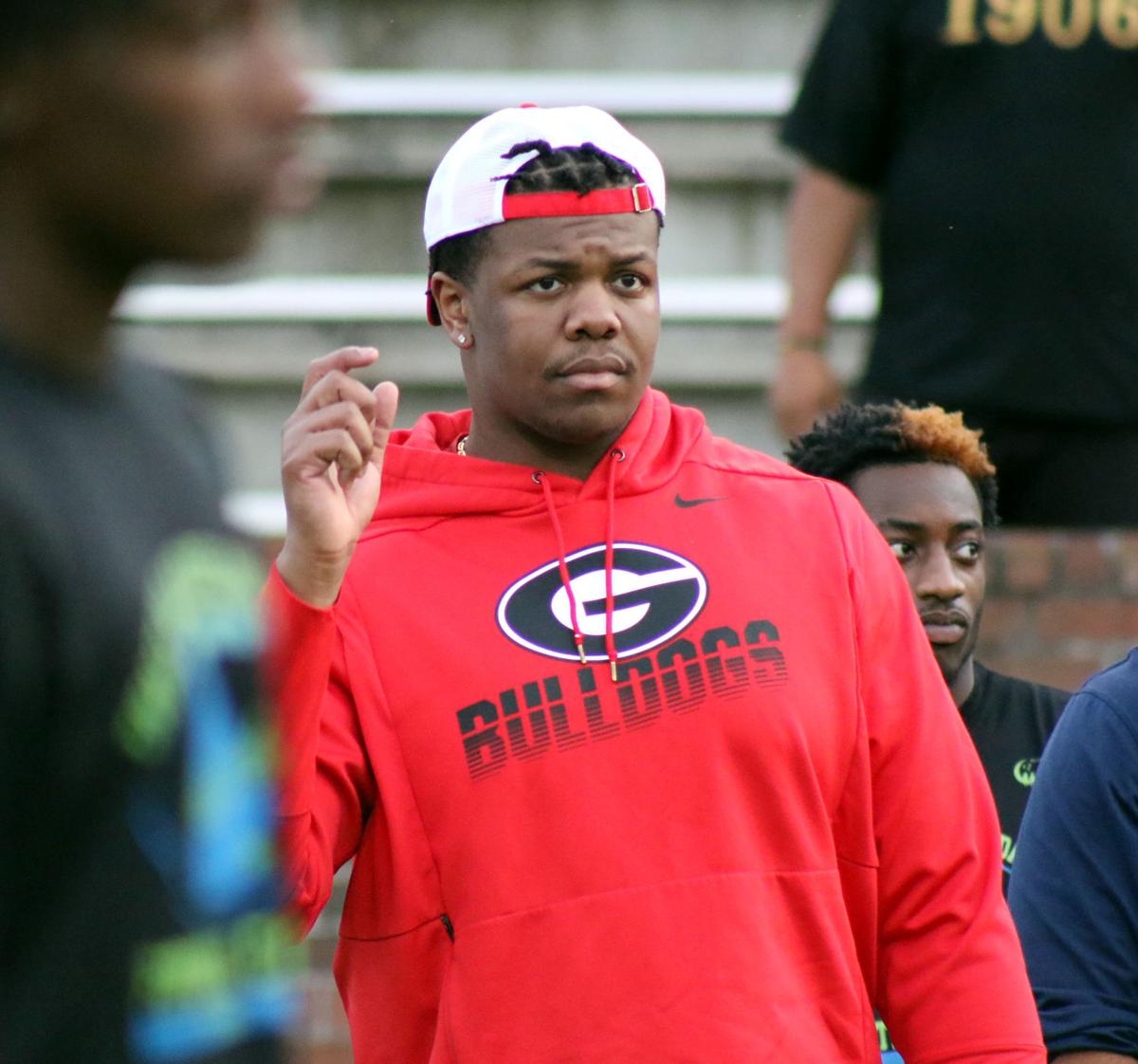 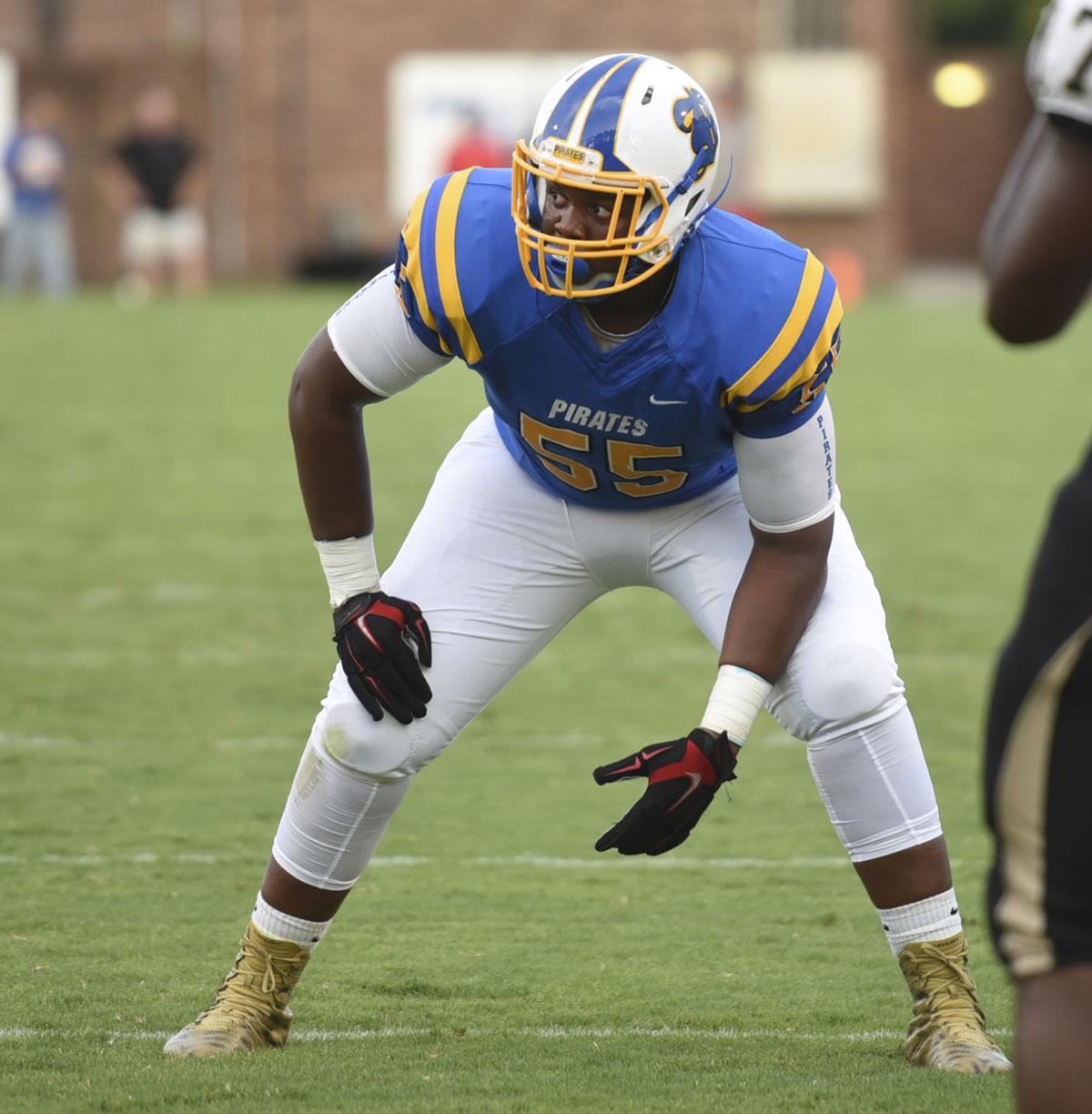 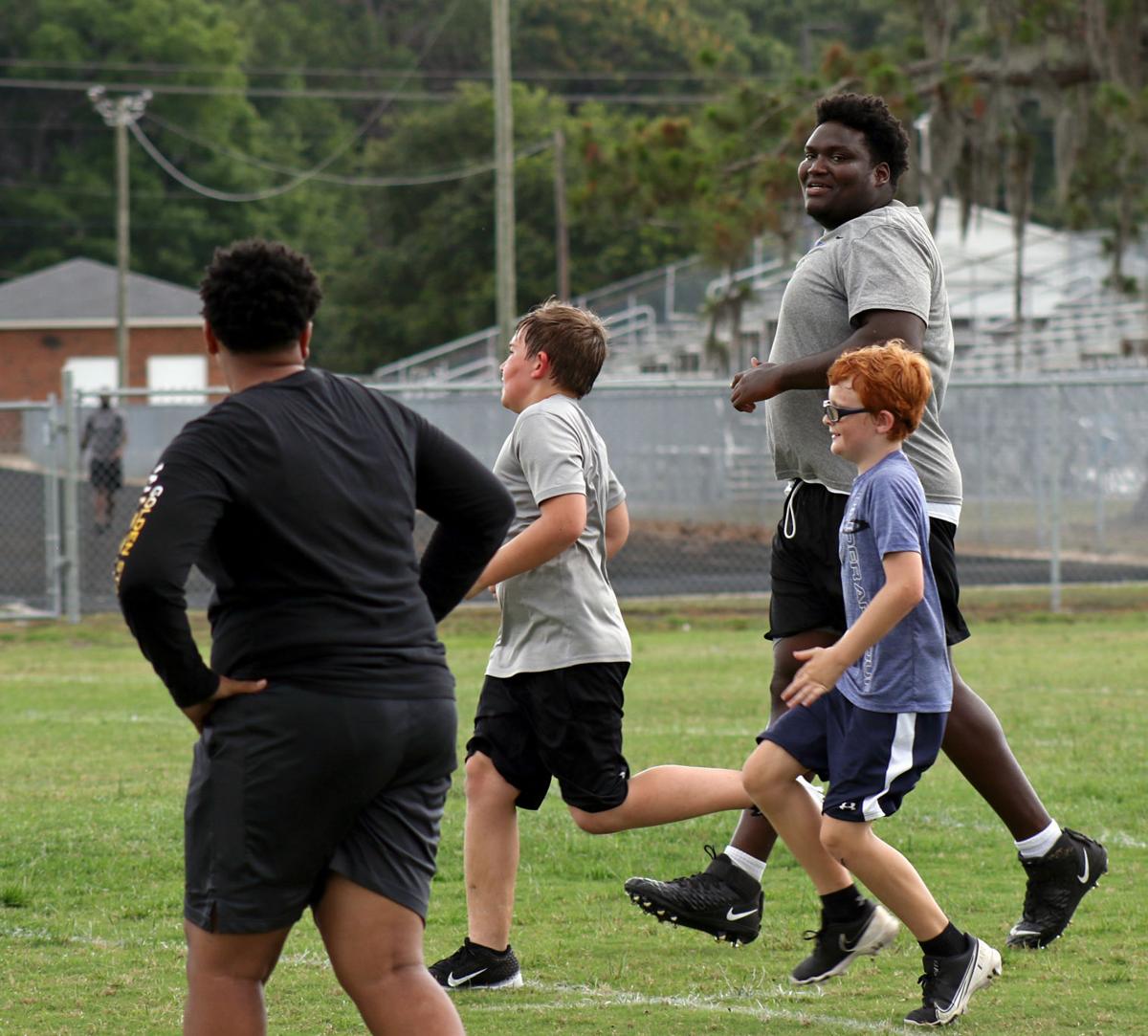 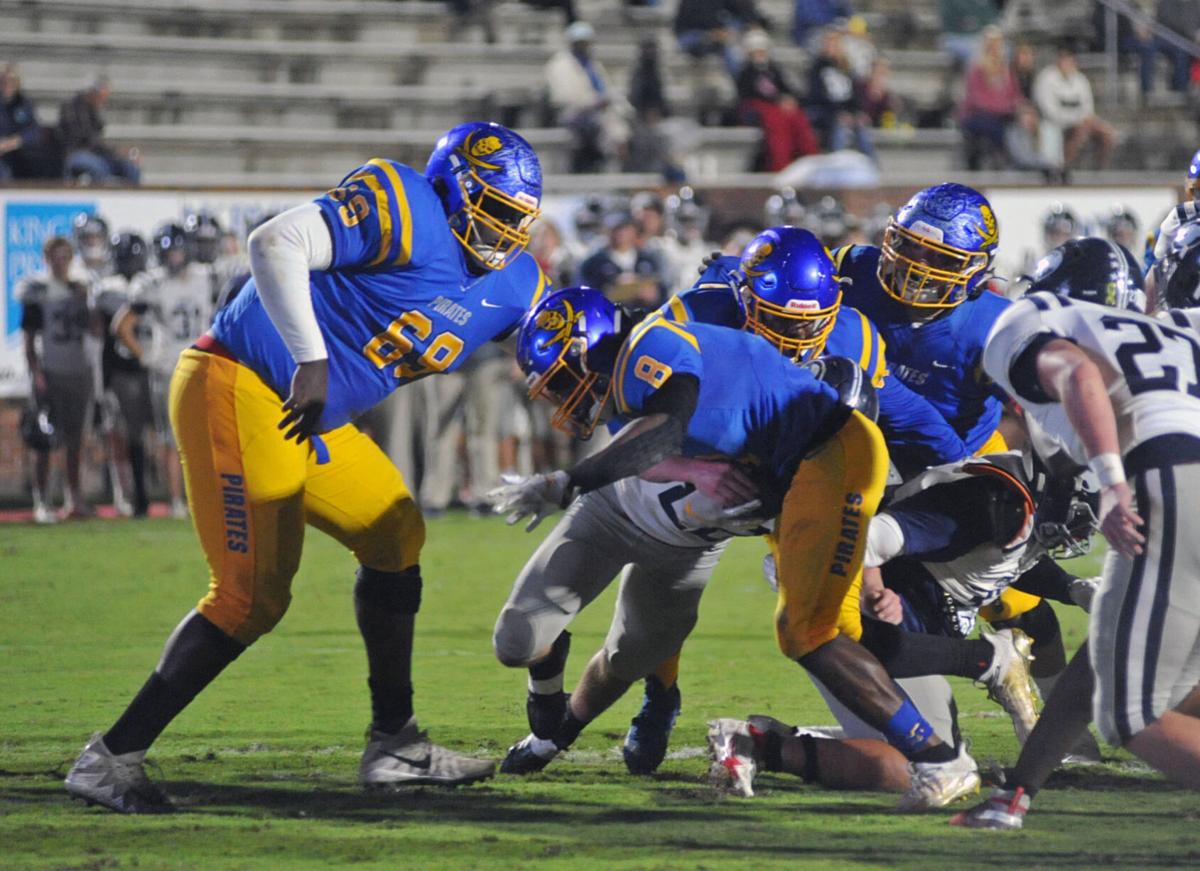 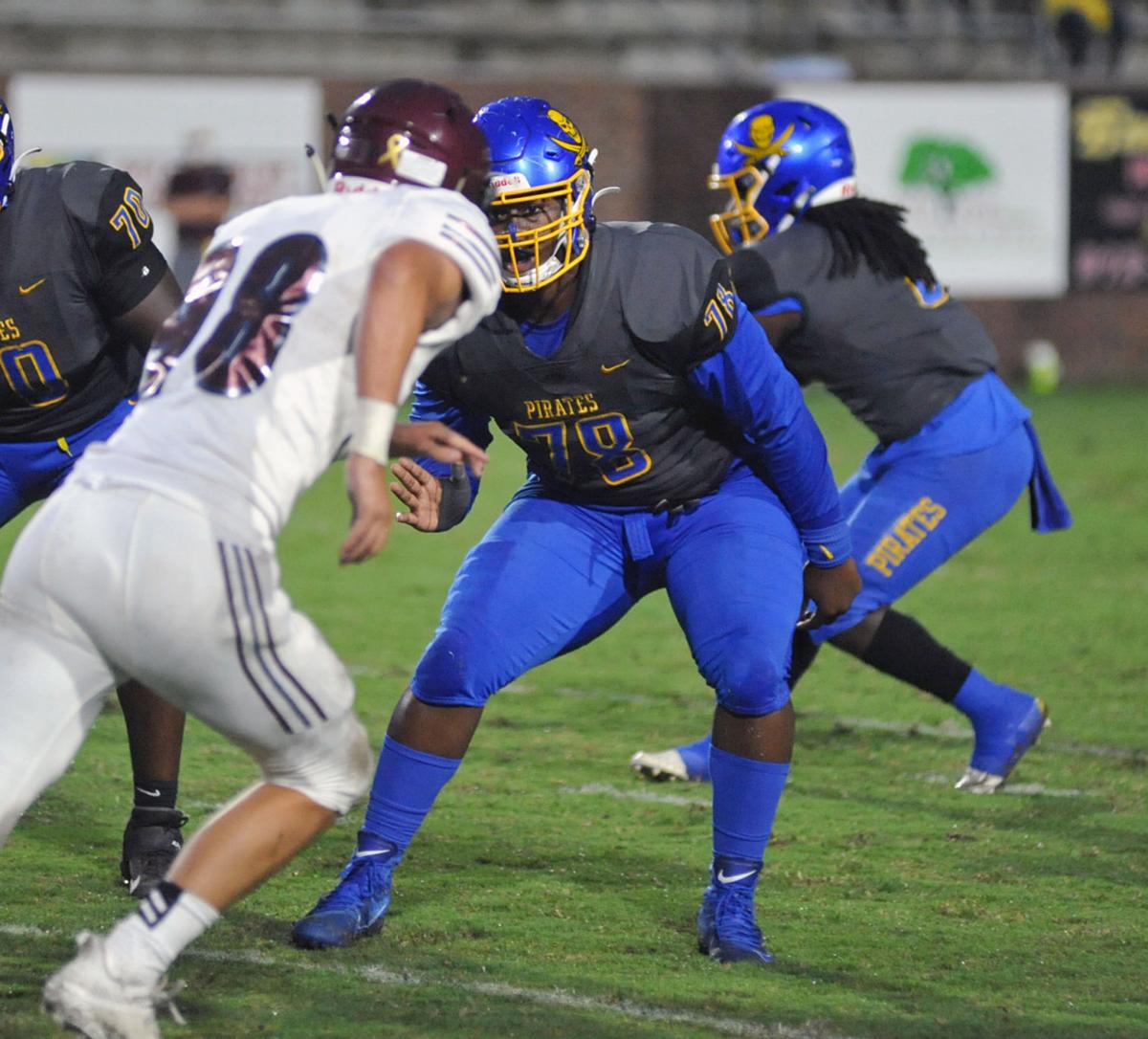 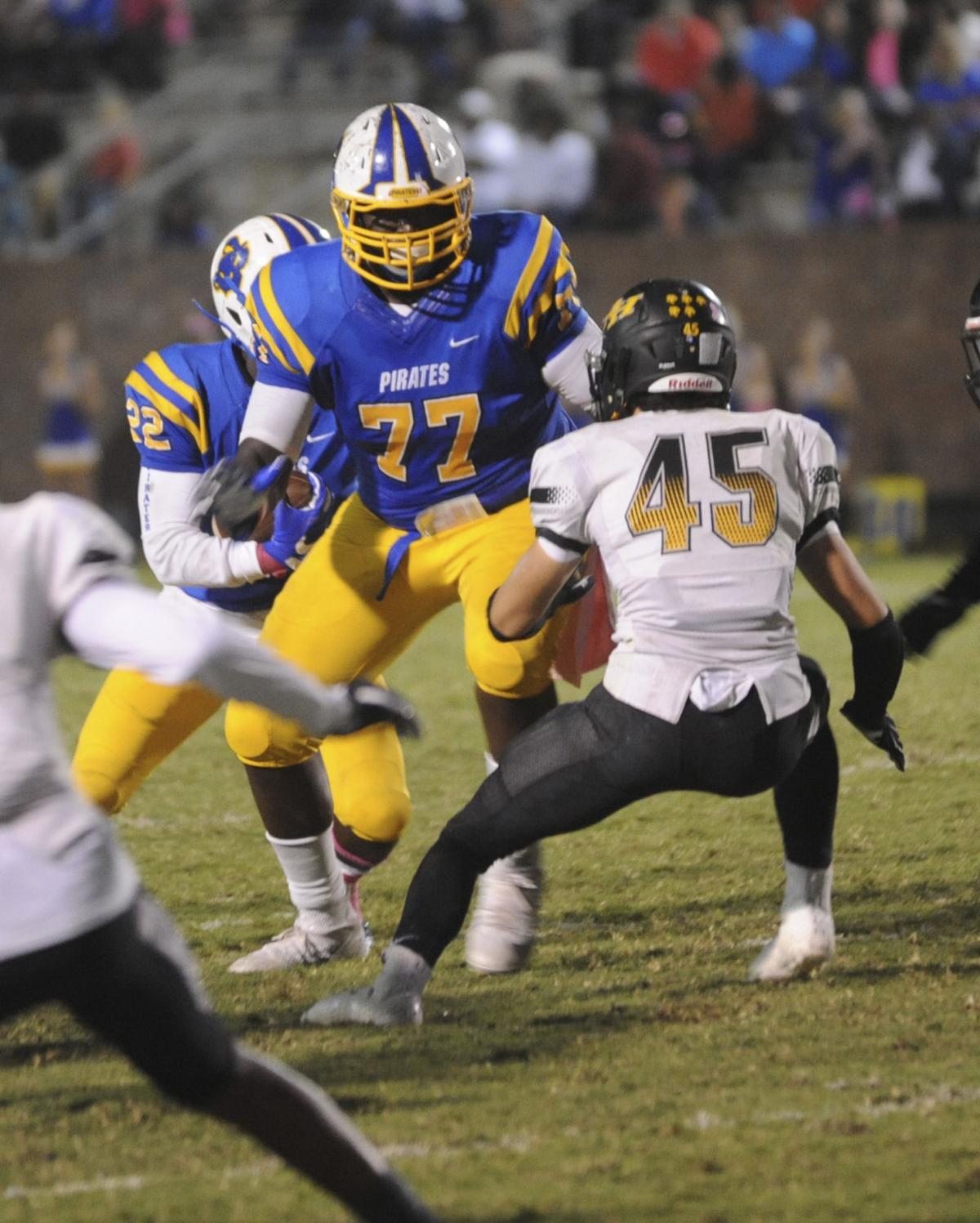 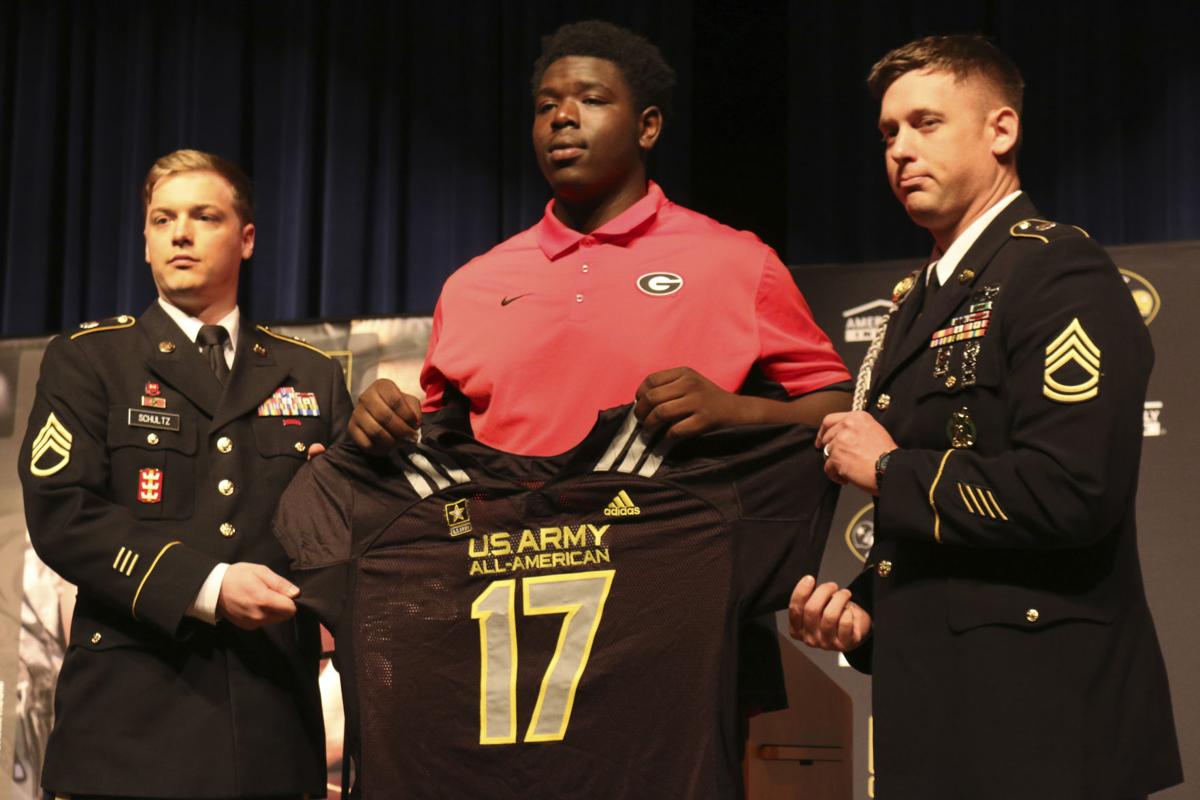 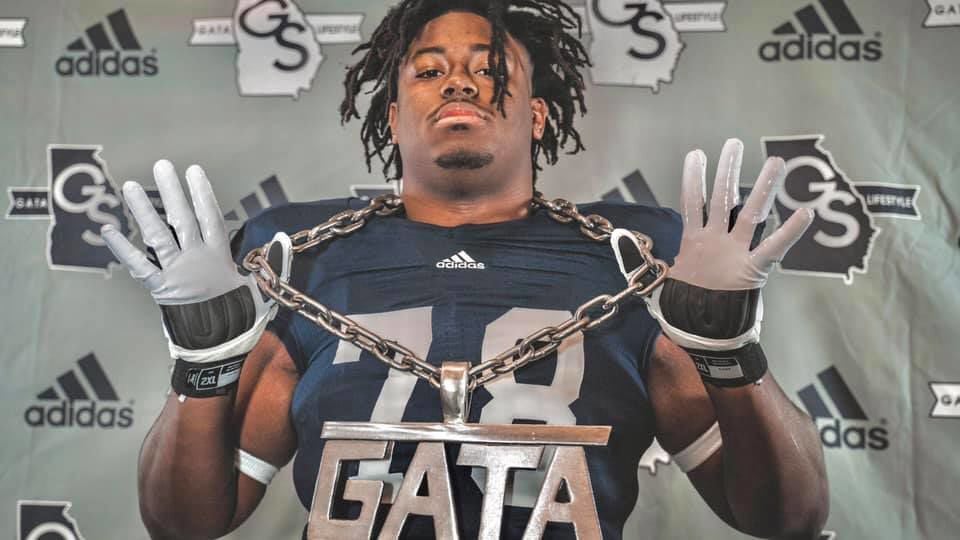 They feed the big boys well over at Brunswick High, but that’s not the only reason the Pirates have become an annual factory for collegiate offensive lineman.

D’Antne Demery originally signed on to be a part of the University of Georgia’s 2017 class, Warren McClendon also chose the Bulldogs when he graduated in 2019, and Caleb Cook joined Georgia Southern as a member of the Class of 2021.

“One thing you can’t coach is size, and that’s definitely one thing that we’ve been blessed with here — just guys with great size,” said Pirates assistant head coach/offensive line coach Garrett Grady. “When you see offensive lineman, you think they’ve got to be big, they’ve got to be really, really tall, or have long arms, but the thing people maybe overlook their quickness. And one measurable you can’t forget with offensive linemen is the size of their heart. I think a lot of these guys play with a lot of grit. They’re tough kids. They don’t quit when stuff gets hard.”

While Brunswick has clearly been the beneficiary of some physically gifted athletes in the trenches — look no further than the next link in the chain, 6-7 rising junior Jamal Meriweather, who has already received offers from Marshall and Michigan State — the Pirates have found a way to get the best out of each offensive lineman that’s come through the program since head coach Sean Pender and his staff took over in 2017.

Even outside the Division I players, former Pirates like Valdosta State center Tye Hinson and Reinhardt guard John Cano have proven themselves invaluable starters at their respective schools by maximizing their strengths.

“Tye was a big, strong guy, but there was nobody on the team that was going to be a bigger leader than him, that’s what he brought to Valdosta State,” Grady said. “Cano has got a mean streak in him — a good guy off the field, but when he’s in-between the lines, he’s going to get after it… Those guys found a way to get there. They didn’t get there because of their size; they got their because of their hard work.”

The offensive line unit often finds itself with the most individual time throughout a usual practice at Brunswick, and the staff ensures they make the most of those periods, drilling footwork, pass protection, hand placement and more each session.

For Grady, the goal is to make practice so rigorous that the game feels easy for his players.

A national championship-winning offensive lineman at Valdosta State himself, Grady can recall how daily practice sessions against All-Conference nose tackle DeMario Jones improved his game. Brunswick offensive linemen have the same foil right now in Kashawn Thomas, a rising junior defensive lineman who already has an offer from South Carolina.

“Going up against great competition in practice every day, that goes back to the saying, ‘Iron sharpens iron,’” Grady said. “You look at our defensive front, there’s no slouches up there. They’re going to get after them. They’re going to make them better…

Despite the mentality the staff has instilled on the field, since Grady arrived at Brunswick, the Pirates’ offensive linemen have also exemplified the term “gentle giant.” The three most recent Division I recruits — McClendon, Cook and Charlton — are known high-character players that are just as dedicated to their craft in the classroom.

But when they step between the lines, the protective instinct takes over. Grady believes offensive linemen have got to take pride in knowing no one is going to touch their quarterback.

Though crucial in cultivating the “All About the Family” mentality of the Pirates, typical of a former offensive lineman, Grady readily divvies credit to his players for their enthusiasm in paying it forward among the chain of succession.

Each future collegiate offensive lineman at Brunswick has been eager to share their knowledge and pass the torch.

“I know Warren looked up to Tye and Cano, and Caleb looked up to Warren,” Grady said. “All the guys before, they always help the younger guys out, bring them along, and show how hard they play.”

Just take it from Charlton, who spoke about how meaningful it was for him to continue the tradition.

“It’s very important to me,” Charlton said after committing to FSU. “To be honest, when I came to Brunswick, I never knew I would be able to have this opportunity. Coach Grady, he’s an amazing man. He was the main one to help me, to help Caleb, and he’s helping Jamal right now. Warren had his stuff before Grady came, but Grady still helped.

“To continue this going on is a special thing for me because it shows me I’m great enough to go to college, and to complete high school. I know I’ve still got work — all of us know that — and we all want to put on for the city. This city has been great to us through our ups and downs, Brunswick High School and the city has been great, and we’re going to put on for the city.”

But as proven to be the case at Brunswick High over the past four years, do your job, and you very well may be looking at an opportunity to play college football.