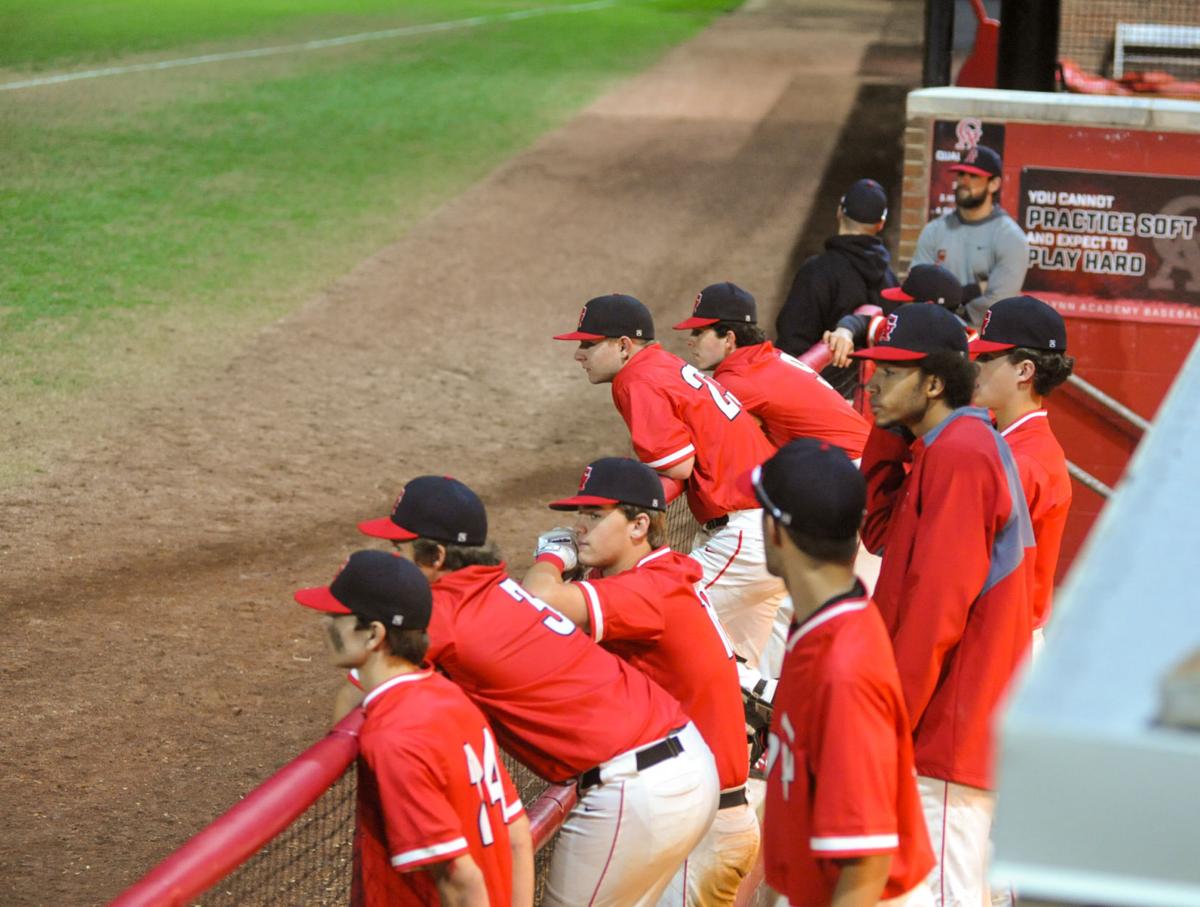 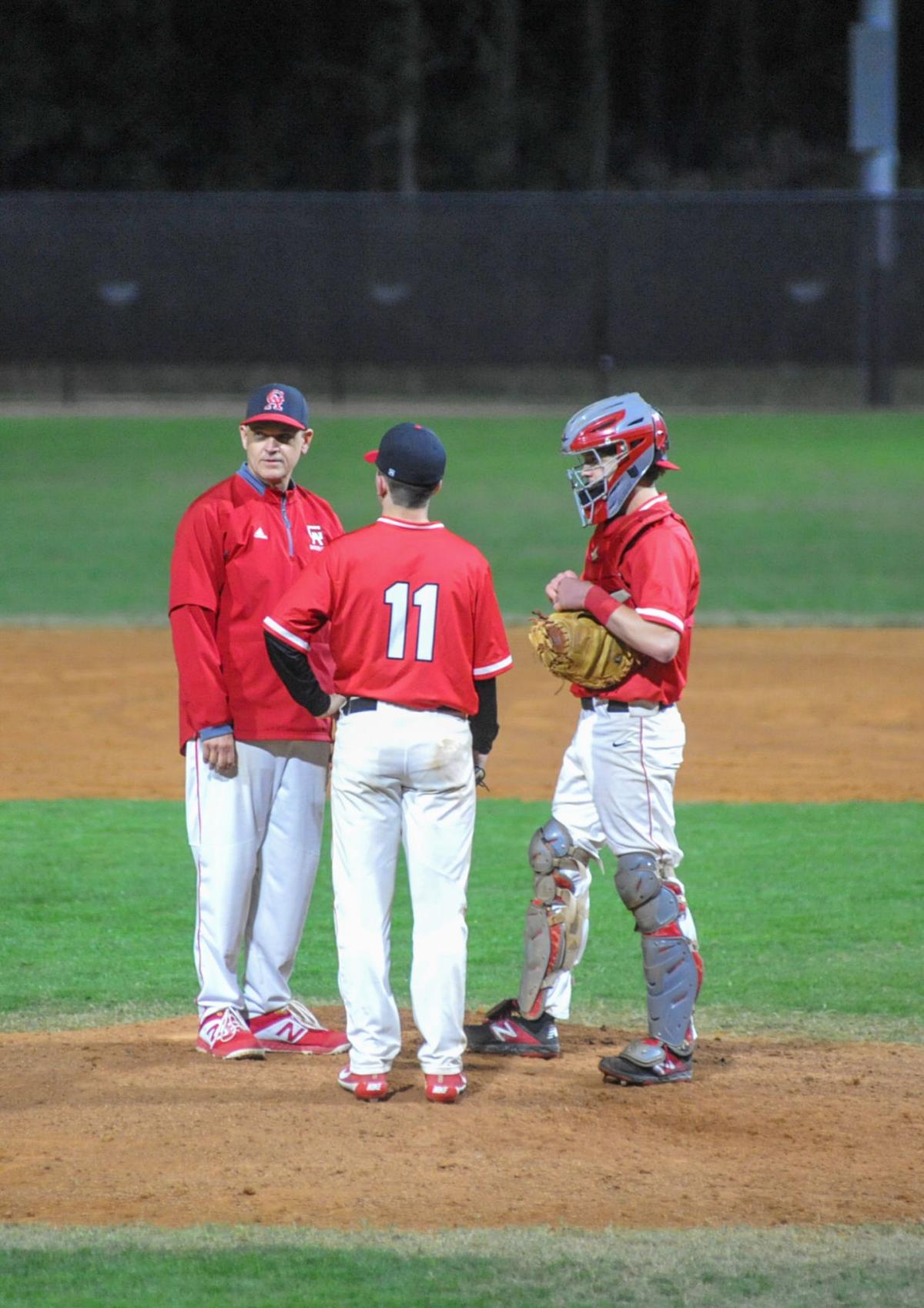 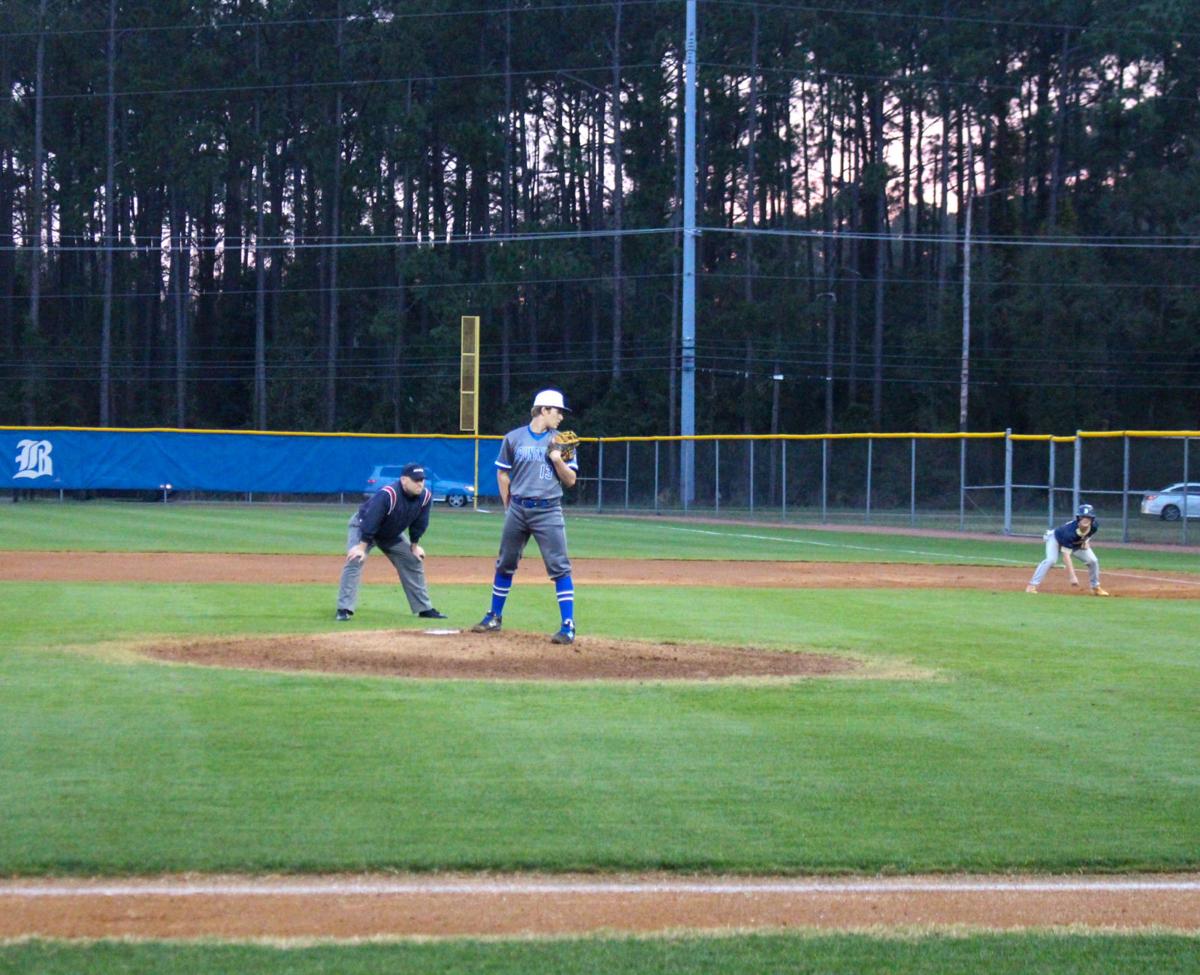 Brunswick High’s Chamberlin Dent looks over to first before deciding on his pitch Tuesday night. 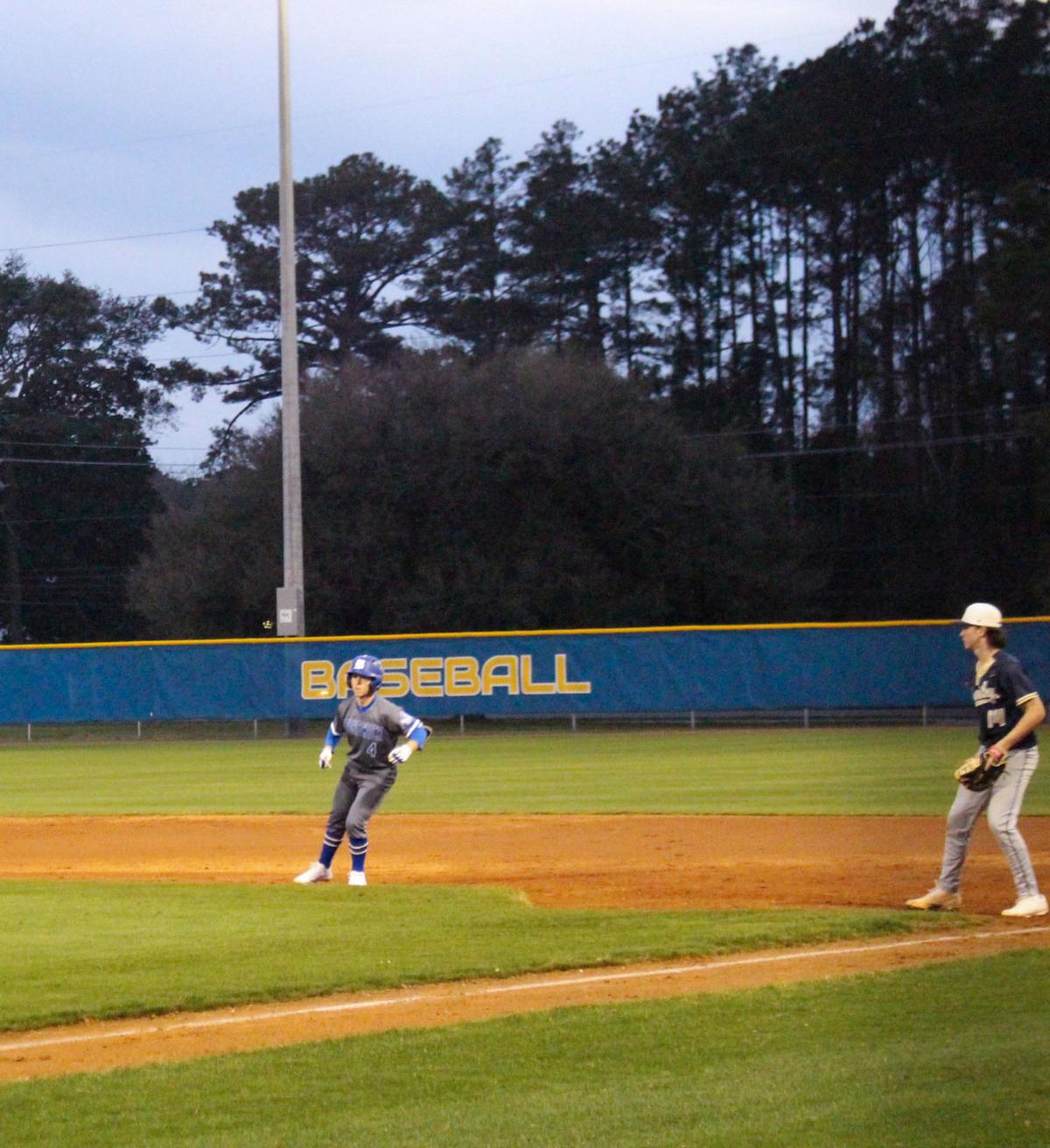 Nick Goff gets a big lead off of first base on Tuesday night. 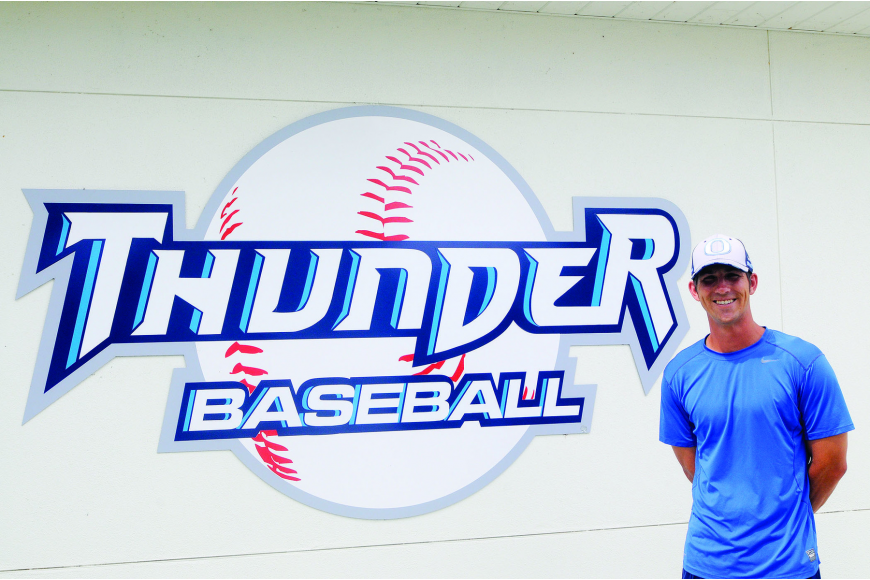 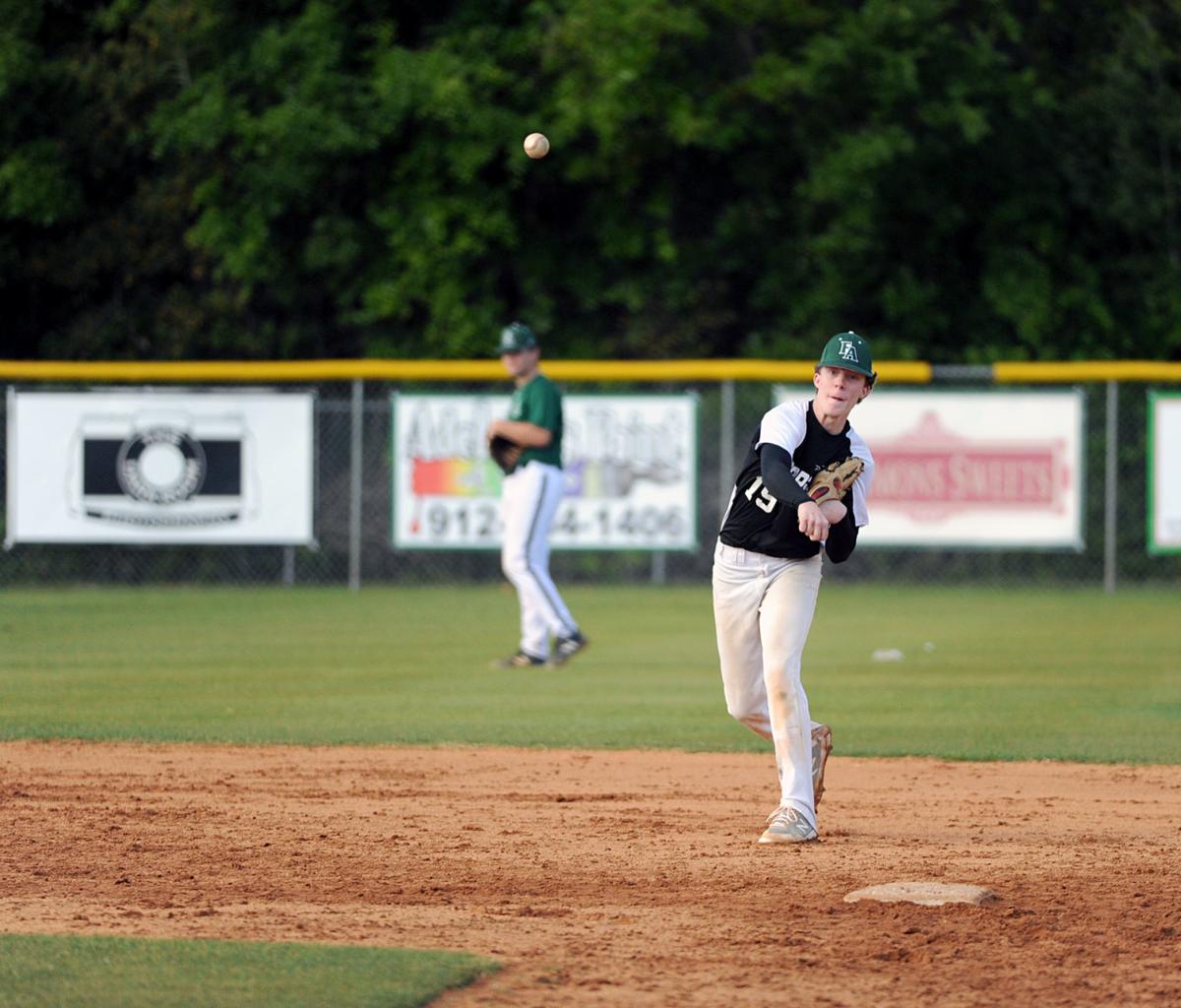 Frederica Academy’s shortstop fires to first after fielding a ball during practice Tuesday.

Brunswick High’s Chamberlin Dent looks over to first before deciding on his pitch Tuesday night.

Nick Goff gets a big lead off of first base on Tuesday night.

Frederica Academy’s shortstop fires to first after fielding a ball during practice Tuesday.

Baseball season begins this week as Brunswick High, Frederica Academy and Glynn Academy all have their first official games of the year.

The Terrors are the first to play as they welcome Camden County today at Wainwright Field. Brunswick High’s first game will be Tuesday as they host Charlton County, and Frederica will begin on Thursday with a road game against Savannah Country Day.

Brunswick and Frederica both have new head coaches this season as Greg Roberts came to BHS from Frederica to coach, and the Knights hired Tim Orlosky.

After last season getting cut short due to COVID-19, all three coaches are excited to return to the diamond and begin this new season.

“I think everybody’s ready to see some baseball,” Roberts said. “I know the kids are and us. I think their parents may be as excited as they are.”

“It’s hard to explain it,” said Glynn Academy coach Trent Mongero. “Playing games in the spring has been a part of my life since I was about four years old, and to have the carpet ripped out from underneath us, so to speak, in the middle of the season, and then not have a summer — It just feels weird. Like, there’s this missing piece, and we get to fill that gap again, and the guys are fired up.”

With the 2021 season kicking off, all three head coaches gave their takes on the season and some insight into their teams.

The Terrors started practicing again about a month ago to get ready for the 2021 season. Despite COVID-19 still causing issues, Mongero said it’s been business as usual in preparing for the season. He said they were blessed to have some workouts in June and July, but now that the season is here, it’s all about continuing to get better each week.

“You’re never quite ready by game one,” Mongero said. “Your goal is to be your best by the end of the regular season. So it’s a continual adjustment process the whole time.”

Glynn Academy graduated some of their starters last season and will be looking for guys to step and feel some of those roles. Mongero said quite a few guys are returning that’ll be key components on this year’s squad.

“We lost some key players, especially on the mound,” Mongero said. “That was a huge hit for us, so we’re going to need some guys to step up on the bump if we’re going to have any chance of reaching our goals and making a run in the playoffs.”

“Jackson Bufkin is back who got quite a bit of playing time last year. Whenever Paul (Hegeman) was pitching, he was catching,” Mongero said. “Spence Hartman and John Long were breaking into the varsity lineup when the plug was pulled on us. Those two guys were sophomores last year, and then Hank Noonan had broken into the starting lineup pretty early in the season as a freshman.”

On the mound, the Terrors will look to Wood, who was arguable their top pitcher last season. Through non-region, Mongero said he would use various arms to figure out who will carry them in region play.

“Blake competes at an extremely high level, and even when he doesn’t have his best stuff, he’s going to find a way to give your team a chance to win,” Mongero said. That is the sign of a tremendous high school pitcher.

Mongero also said junior Tom Echols could see some time on the mound as well.

“We’re looking at him to be a significant contributor. We also got Shaun Munoz, who was in the closer role last year. We’re still not sure what his specific role is going to be, but he is going to be in the mix for sure.”

Two youngsters in the mix are Aeden Beuning, freshman A.J. Ward. Then Tyler Motos, a senior, could see some time on the mound as well.

Mongero’s expectations are simple — he wants to continue to grow as a team and find the best mix of players that’ll help lead the team to a deep playoff run and compete for a region title.

The Pirates welcome Roberts from across the causeway as their new coach. Despite some COVID-19 struggles and having kids quarantined, Roberts said it’s going well.

“I like where we’re at and like what we’re doing — hopefully, we can keep getting better every day,” Roberts said. “What little bit of summer we got and had a great fall. We’ve been around each other a lot. I think they’re grabbing on to what my coaching staff has put in place. I’m excited. I’m loving being here. I love the kids. They’re working hard.”

He inherited a gritty team that’s got a lot of talented returners. Roberts named a few guys that have been standing out so far.

“I’m excited about Devonte Gadson, a returner from last year,” Roberts said. “He can do so many different things and play so many different positions. He’s a huge piece for us right now. Isaiah Wellman, another senior, right now is slated as our number one on the mound. We’re very excited about what he’s going to do for us. Kyle Lodise will more or less be locked down as shortstop for most of the year when he’s not pitching — has come on strong here as of late, phenomenal defender and expecting huge things from him this year as well.”

Roberts said there are a few things that make Wellman special on the mound.

“For one, he’s left handed. Two, he comes with a plethora of experience — of any guy on our staff, he’s definitely got the most,” Roberts said. “His velocity is good. When he’s locating, he’s really tough because the ball moves well. He’s spent a lot of time on off-speed stuff. He’s getting better and getting stronger as well.”

The Pirates picked up senior Caden Hutchinson from Glynn Academy, and Roberts said he’s already putting in a lot of work, and the team has already accepted him.

“I got high expectations for Caden. He’s jumped right in,” Roberts said. “He’s been a phenomenal teammate. He works his tail off every day of practice. Right now, he’s getting some infield looks at some different places. We’re even talking about sending him to the outfield, some as well.

Roberts said he’s excited about this team, and after the scrimmage, feels like the kids are buying into his system.

“Every facet of the game, I feel like we did pretty well, which was a testament to them of buying in and trusting what we’re trying to do,” Roberts said. “It’s also a testament to our coaching staff of how well they’ve gotten prepared and where we’re at right now. I’m happy with that.”

The Knights will be the last to kick off this season, and like the Pirates, welcome a new coach. Despite not having a ton of time with the players, Orlosky said he’s excited about this season.

“We’ve been on and off the field with some COVID scares and things like that,” Orlosky said. “I think we’ve done pretty well — made some good strides defensively and in in the cage. So I’m pretty excited about the upcoming year.”

Even though he’s still learning about his team, Orlosky named three guys that have already stood out to him.

“Mason McGraw looks good right now, up the middle, on the mound and at the plate,” Orlosky said. “Ben Armstrong, another infielder, is hitting the ball well. He’s also shown some good things off the bump. Ben Carol returned to Frederica. I believe he was in Texas before, but he’s proven to be a solid catcher. I think the bonus has been his performance so far, at the plate. Just with those three guys, it’s been a pleasant surprise, for me anyway, to see they were a little farther along than I thought they might be.”

With so many guys that can play various positions, Orlosky said having those utility players is key. He said it could make the team good, especially at a smaller school like Frederica.

The Knights are still looking for their ace pitcher, and Orlosky said he might not make a firm decision until later in the season.

“I can see us piecing together a lot of games and keeping some of their outings a little shorter, especially at the beginning of the season,” Orlosky said. “I think for me, in my first year, I’m going to feel those guys out in shorter starts and shorter appearances at the beginning of the season, and maybe not decide on a typical rotation until maybe the middle of the year.”

Players have put in the work for Orlosky despite being new to the program. He said they’ve committed themselves to the weight room and getting in the work.

“They’ve been a pleasure to work with — I’ve been thrilled just with the school and the caliber of kid who’s been on this field,” Orlosky said. “We don’t have 35 guys running around out here, and maybe that’s what makes it more enjoyable — you only have 12 or so, and they’ve been fun to work with — I’ve enjoyed it.”

Orlosky said his expectations in year one are to have his guys play hard every single game.

“If we prepare well enough and I do my job, then they should win,” Orlosky said. “So, ultimately, if that doesn’t happen, that’s on me. As long as those guys play hard — my expectation is they play hard.”