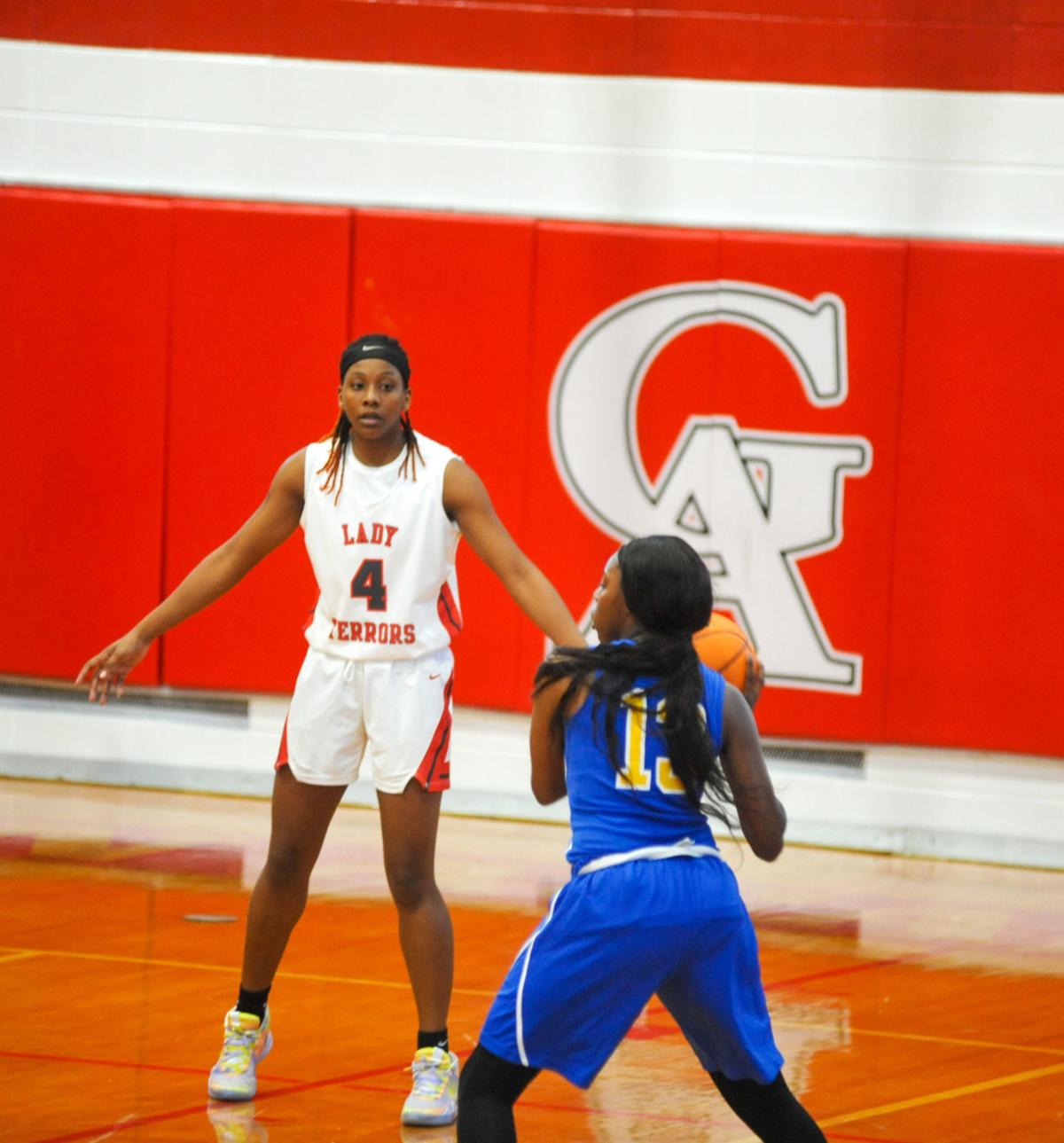 Glynn Acadmey’s Zoesha Smith gets set on defense during the game against Beach on Saturday. 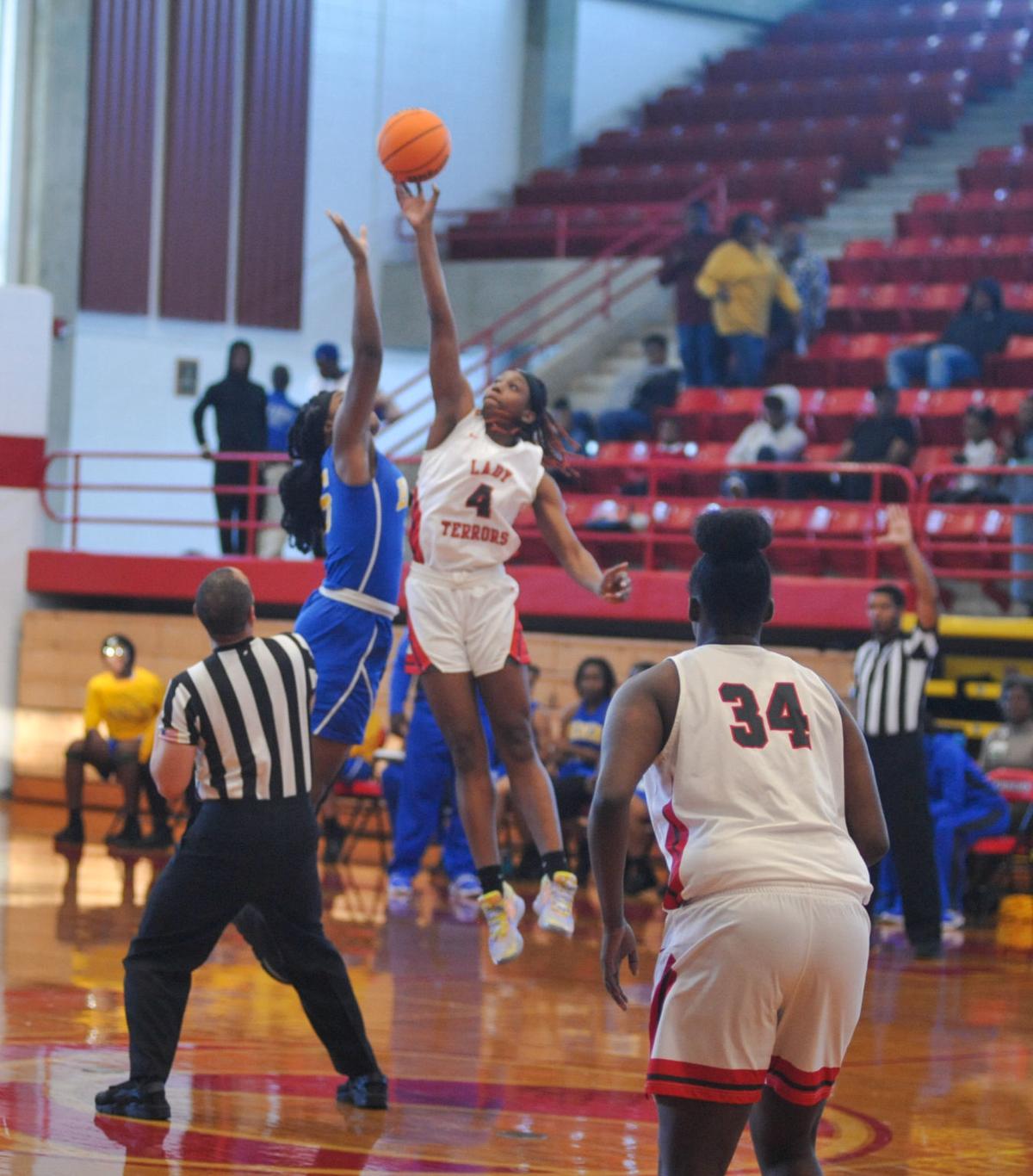 Glynn Academy’s Zoesha Smith, left, wins the tip off against Beach on Saturday as La’Trinity Best, right, looks to catch the ball. 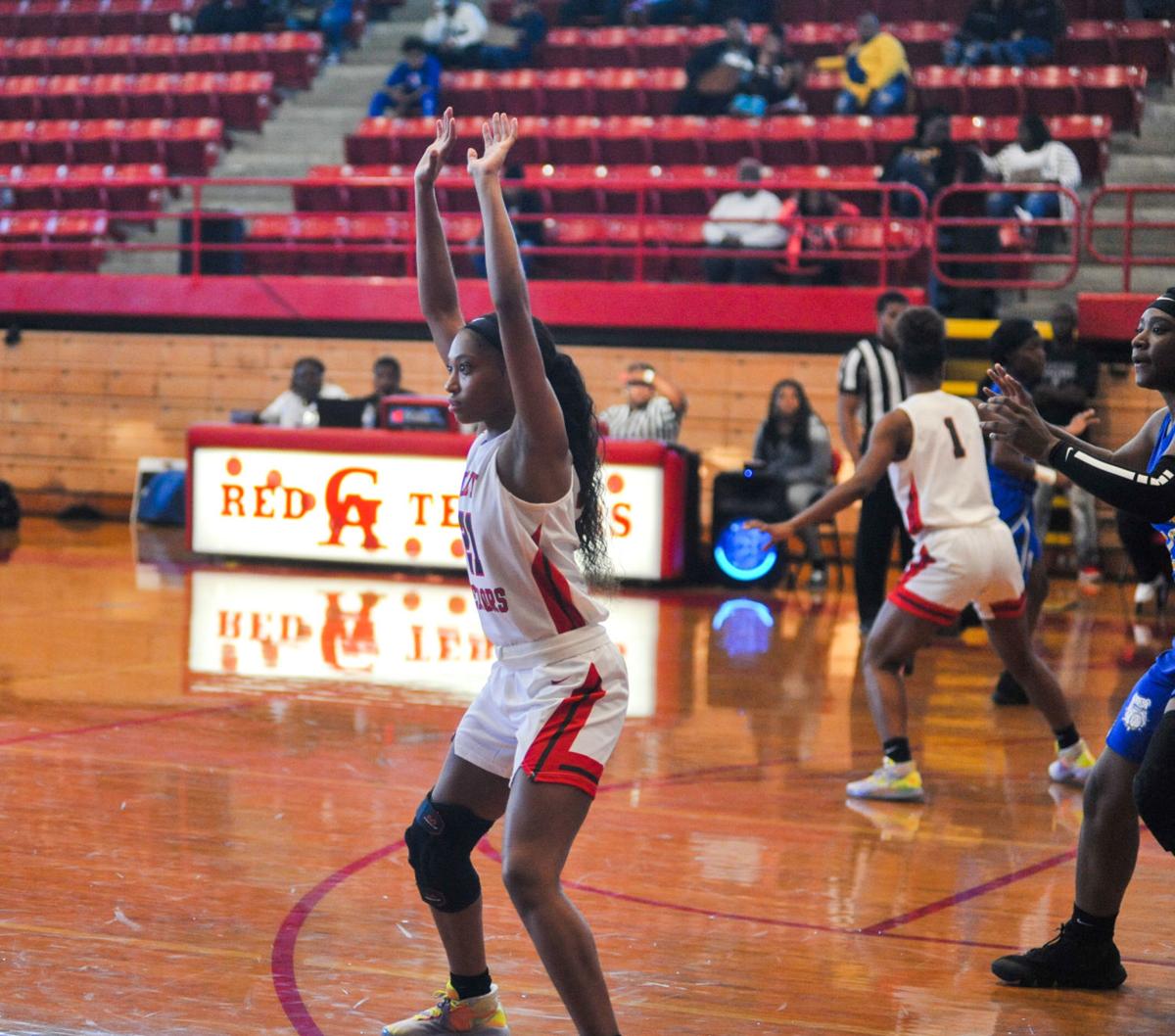 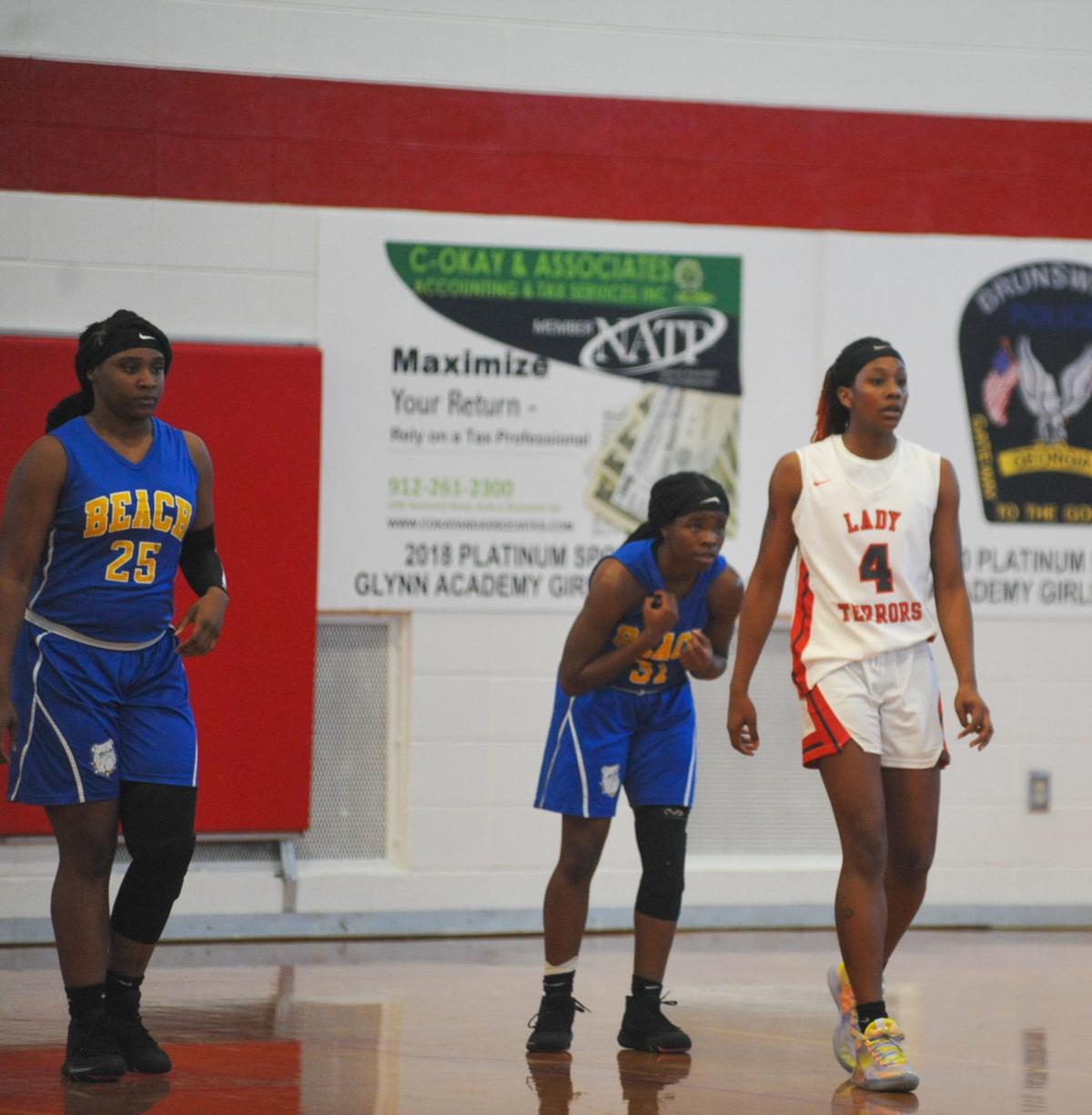 Glynn Academy basketball player Zoesha Smith waits for the ball to be brought down the court against Beach on Saturday. 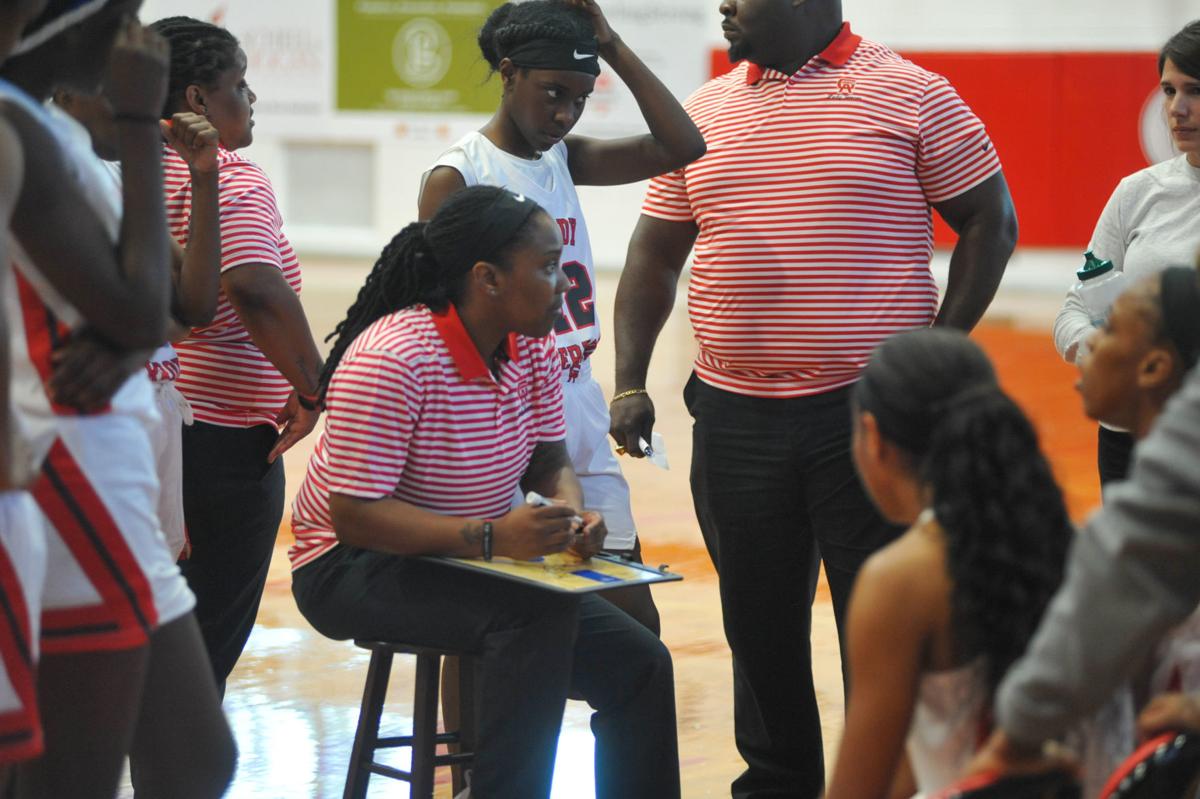 Glynn Academy's girl basketball coach Sharnesha Smith addresses her team during the second half against Beach on Saturday.

Glynn Acadmey’s Zoesha Smith gets set on defense during the game against Beach on Saturday.

Glynn Academy’s Zoesha Smith, left, wins the tip off against Beach on Saturday as La’Trinity Best, right, looks to catch the ball.

Glynn Academy basketball player Zoesha Smith waits for the ball to be brought down the court against Beach on Saturday.

Glynn Academy's girl basketball coach Sharnesha Smith addresses her team during the second half against Beach on Saturday.

With that win, the Lady Terrors are 5-0 on the season and are showing how dominate they are on both sides of the court.

The Lady Terrors held Beach to 14 points at the half and didn’t let them back into the game. Glynn allowed the tempo of the game to get a little quick toward the end of the ball game, but after a quick timeout collected themselves and finished strong.

“We performed well, and we had a good game plan coming into this,” Glynn Academy coach Sharnesha Smith said. “I felt like they executed it perfectly. We focused on some key people that they had, and for us, it’s us being consistent on both ends of the court. So I challenged my girls with that.”

Glynn Academy has a lineup full of playmakers on offense and defense. However, the two that impress the most are the Lady Terrors power forwards La’Trinity Best and Zoesha Smith.

These two fed off each other throughout the entire game. If Best didn’t bring down the rebound or make the shot, it seemed like Smith was there to back her up, and Best did the same for Smith.

Smith led the team with 23 points on Saturday and improved her season average to 20.8 points a game. She’s also leading the team in rebounds averaging 12.5.

Best wasn’t far behind her and made some key shots at the beginning of the game to get the momentum going for Glynn. She finished the game with 14 points. Talia Hamilton was the third leading scorer on Saturday as she added seven points respectably.

Smith said that these two are strong together and that the things they can do on the court together are amazing.

“They’re like our two-headed monster, to be honest,” Smith said. “Both of them are high caliber elite athletes that can do some things. Most importantly, with their size, they’re able to handle the basketball, make good decisions, and they’re just aggressive. They clean up around the basket pretty good, and then they’re finishing very well for us so far. I’m happy they’re on my team, and I’m not going up against them.”

Right now, Glynn averages 48.2 points a game and is making 39 percent of its shots. Smith said that through five games, she is impressed but also notes that there are a few things they can still work on getting better.

“I’m impressed with our execution on both ends so far has been very good,” Smith said. “The game plan and the preparation, the focus that they have every shoot around going into every game has been phenomenal. I’m very happy about that.”

“I think with us getting better at, I think we could control tempo a little better, shot selection, and I think fatigue kicked in a little bit. We have some players who are playing quality minutes for us, and I think they have to push through that fatigue a little bit, but I think we’re alright, though.”

The Lady Terrors hit the road Tuesday for a game against Statesboro High with tip-off slated for 5 p.m. Glynn will look to stay perfect on the season before heading into region play next on Friday.