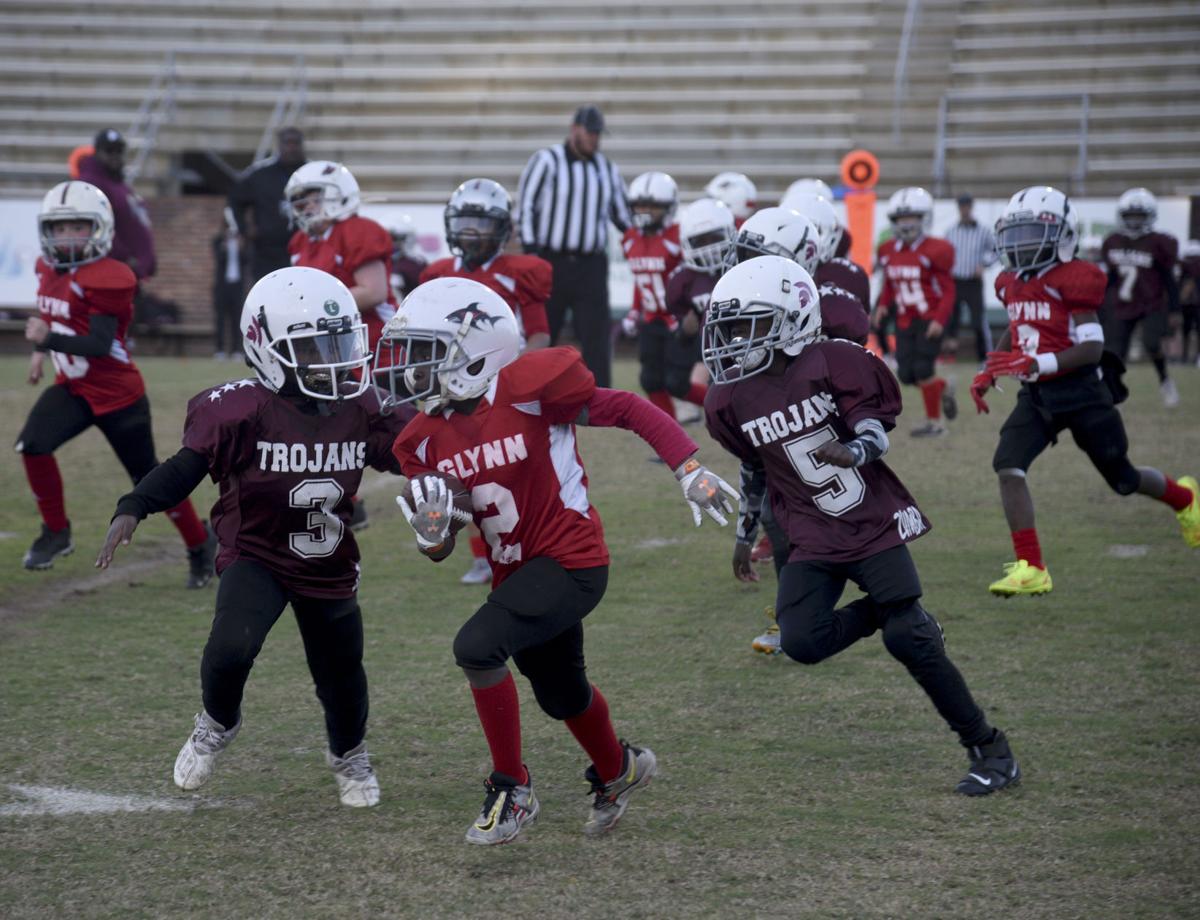 Glynn County’s Zian Foster bounces to the outside against Coffee in the Sharks 25-0 win. 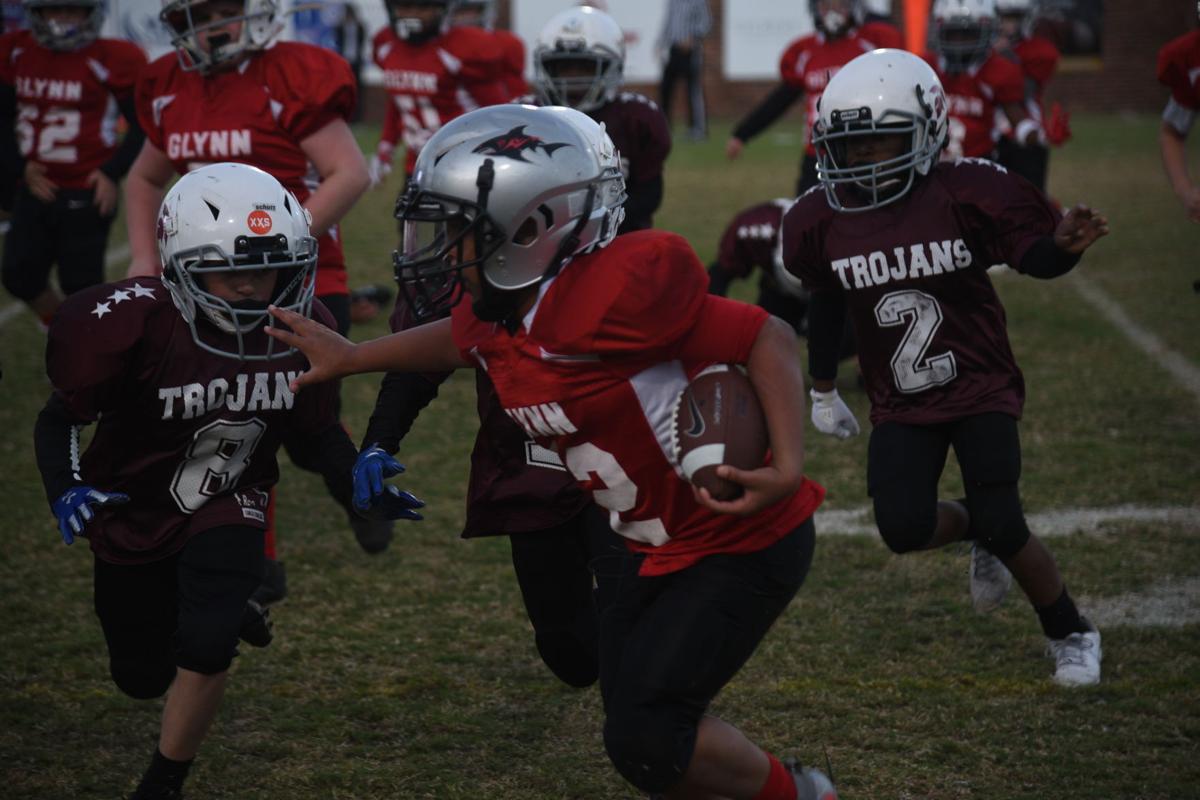 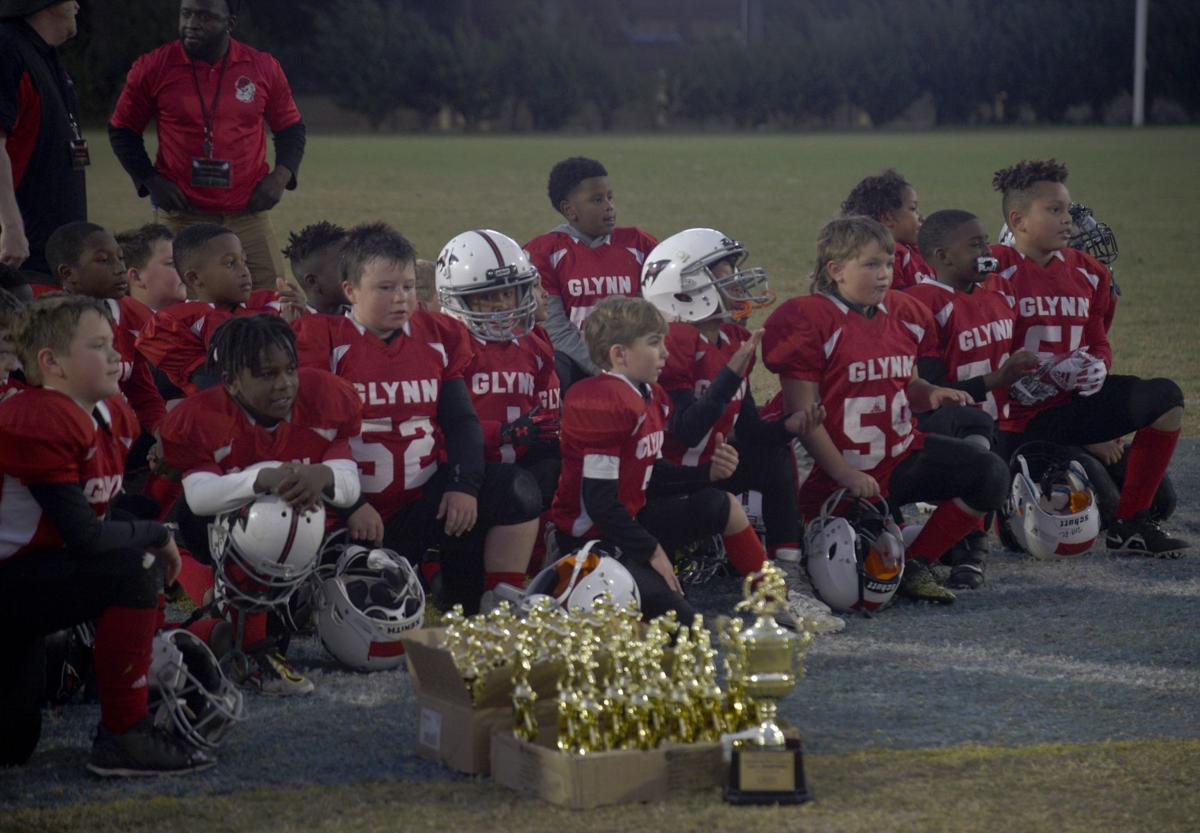 The Glynn County Sharks await the trophy celebration after its 25-0 win over Coffee.

Glynn County’s Zian Foster bounces to the outside against Coffee in the Sharks 25-0 win.

The Glynn County Sharks await the trophy celebration after its 25-0 win over Coffee.

Having only been together for three weeks, the Glynn County All-Stars showcased their skills under the bright lights of Glynn County Stadium.

The Sharks took the field and from the first snap, they showed why they were the reigning district champions.

After both teams started their opening drives with punts, the Sharks defense forced a turnover on downs inside their 20-yard line.

Using the clock to their advantage, the Sharks burned six minutes of the game clock before scoring the game’s first touchdown by running back Corey Wheeler from 13 yards out.

Glynn would convert the extra-point play and set up shop on the defensive side of the 20-yard line.

On the first play of the drive, Coffee’s Kyan Mizell was strip-sacked by Wheeler, and the Sharks defense swarmed on top of ball.

Two plays later, Wheeler would punch in his second touchdown of the game and pushed the team to a 13-0 lead heading into halftime.

During the halftime break, the coaches went over the game plan with the players and told them to not take it easy and to continue chewing the clock.

The players listened and executed the game plan from their coaching staff.

Eating five minutes of the eight-minute clock, Glynn ran nine offensive plays before reaching the end zone on the 10th play of the drive. Wheeler yet again found the end zone after rushing for 22 yards on the previous carry and doing his best Derrick Henry impression.

Head coach Josh McDonald said the team overall is talented and pointed to the group of running backs who all do different things well.

“They just all buy into the team concept,” McDonald said. “We teach blocking schemes so you can see where we open holes up and all of them are successful.”

Coffee’s offense wasn’t ready to face the Sharks’ defense throughout the game, turning the ball over again on a fumble just before the end of the third quarter.

Glynn’s offense continued to run the ball and keep the ball inbounds at all times. On the team’s seventh carry of the drive, Wheeler found the end zone for the fourth time.

Leading 25-0, the Sharks made sure to keep the shutout intact on Coffee’s final offensive drive. Three straight negative plays pushed the Coffee offense into a passing situation on fourth and long.

Although the pass was completed, the Sharks held firm and forced its fourth turnover of the game.

As the final horn blared and the clock read 0s, the Glynn County Sharks celebrated as a team and earned their district trophies.

“It’s just awesome,” McDonald said of being back-to-back region champions. “The county rallies around these kids and they were able to come out and beat a very good coffee team, that dominated their side of the bracket. It’s just been really fun to watch them do it two years in a row.”

The team’s next game will be either on Dec. 4th or 5th in Effingham County.