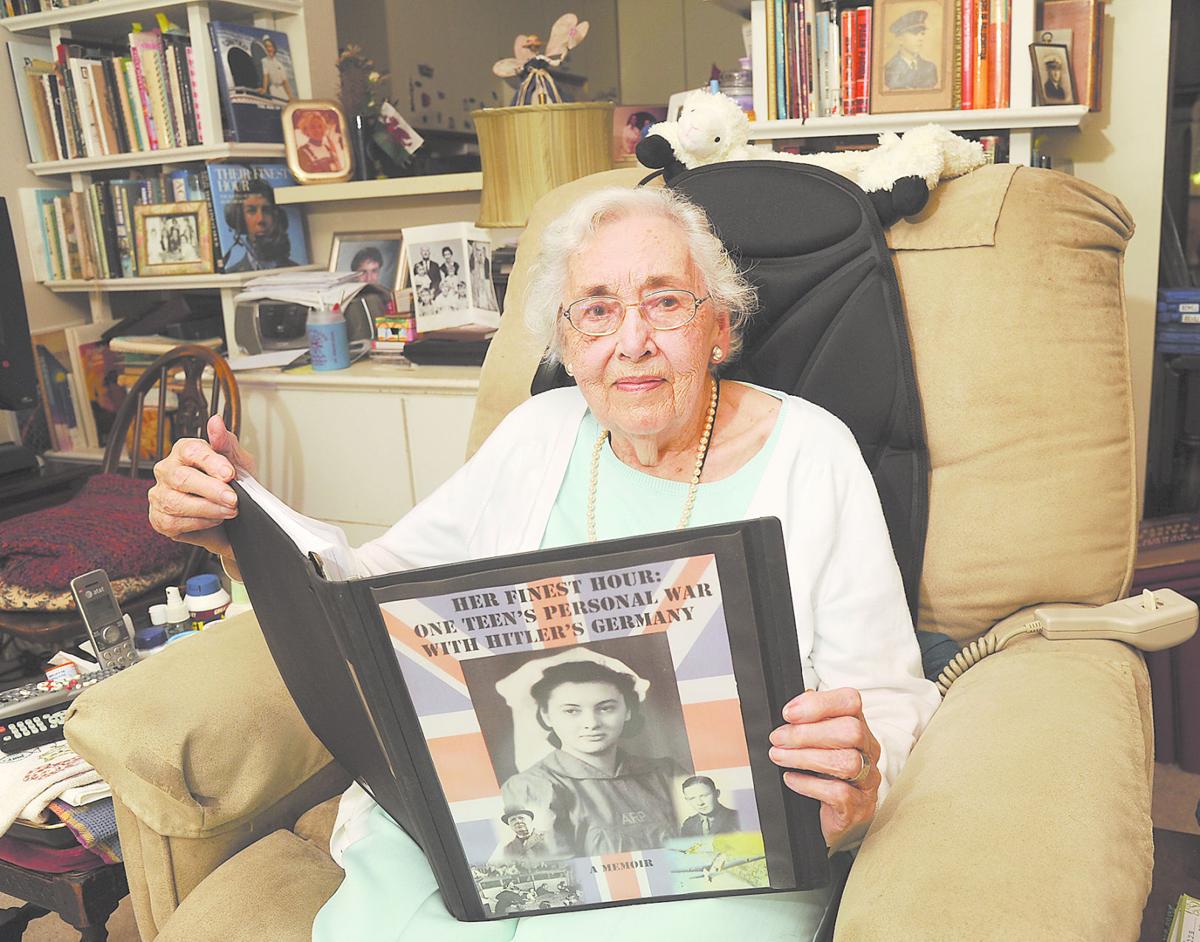 St. Simons Island resident Terry Doster holds the original manuscript of her memoir, “Her Finest Hour” on Wednesday. Doster served as a “plotter” working with Radar to pinpoint Nazi attacks on England during the Battle of Britain. 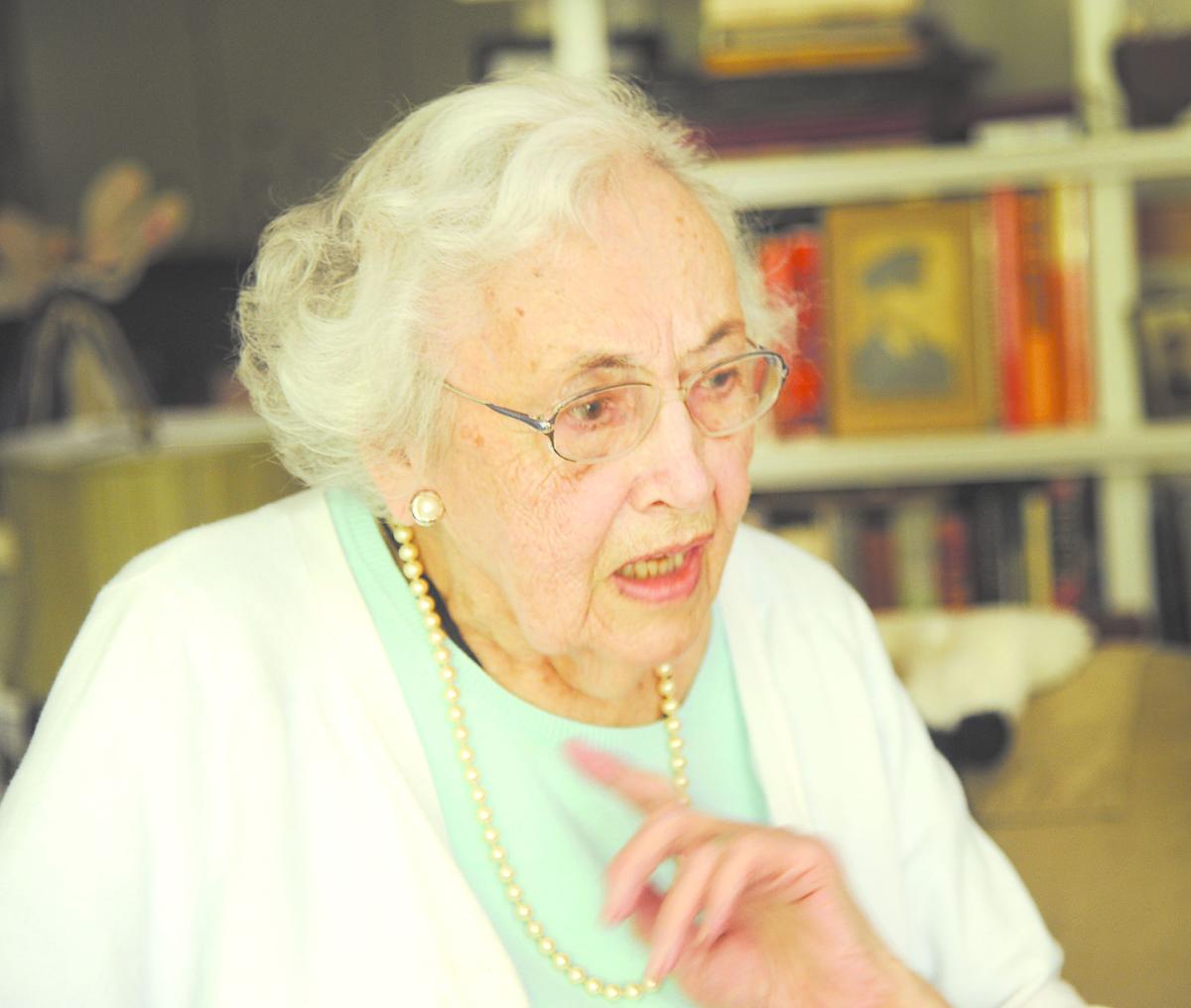 St. Simons Island resident Terry Doster holds the original manuscript of her memoir, “Her Finest Hour” on Wednesday. Doster served as a “plotter” working with Radar to pinpoint Nazi attacks on England during the Battle of Britain.

Stepping into Terry Doster’s home, one might as well be stepping into any charming British lady’s home. Pink roses sit in a dainty vase, an unfurled Union Jack flag rests in the corner, books and albums are neatly stacked on shelves.

From one of those volumes, a young girl, clad in an old-fashioned uniform, stares out from the cover.

“I’ll tell you how this book came to happen,” the 91-year-old said, picking up the manuscript. “I was complaining to my son, Stephen, because I was diagnosed with macular degeneration and could no longer drive. I’ve never been good at sitting still. It isn’t my style.”

Her son, who happens to be an author, suggested that she spend some time recording whatever thoughts came to mind on a tape recorder.

The St. Simons Island resident took his advice, logging in many hours recounting her life in vivid detail. Many of the memories focused on her youth in England during World War II. When she was finished, she gave the tapes to her son.

“Never in a million years did I think that it would be turned into a book. I was just talking. If I knew it was going to be a book, I’d probably have talked differently,” she said with a laugh.

But despite her self-criticism, her son transcribed the tape and the words that flowed became “Her Finest Hour.”

The story paints a picture of an ordinary girl thrust into extraordinary circumstances. Even her recollection of how World War II began seemed somewhat normal to the then 16-year-old.

“My father bought a weekend house down on the coast between Worthing and Shoreham. We were going to go on the beach and were passing a neighbor’s house, he was doing something in his garden and his daughter was in the window. I could hear the radio playing from inside and my father asked them if there was any news. She came back and said, ‘Oh yes, war has been declared,’” Doster said. “It was just said so matter of factly.”

Soon everything changed. The authorities, expecting assaults from the Germans, installed numerous air raid sirens. Doster remembers the primitive systems being set off by anything — including flocks of birds.

“We called it the Phoney War for quite a while. The sirens would go off like a banshee all the time. They hadn’t perfected the Radar system so it kept going off. And we were all supposed to go down to the shelter but after so many times going down there, I think we all just would rather die in our beds than in that damp little space,” she said.

False alarms soon gave way to the real deal. In the summer and fall of 1940, the Nazis began an intense aerial bombing campaign over England, known as the Battle of Britain. The assault, which claimed tens of thousands of civilian lives, eventually became a decisive British victory and turning point in the war.

This year marks the 75th anniversary of that battle.

Doster was front and center for the attack, being bombed out of two homes and witnessing carnage on a daily basis.

“During one of the first raids over England in the Blitz one of the first bombs fell near our house. It felt as though the whole house had been picked up and set back down again. And then the plaster from the ceiling started to come down like snow on the bed and on me,” she said.

“So I got up and went to the bathroom to wash it off, and I couldn’t open the door because the ceiling had fallen in. I thought, ‘Well gosh, aren’t I lucky.’ The bathroom is next door to my bedroom and it could have fallen on me, and I would have been a goner.”

The family moved from that home to another outside of London. But they couldn’t escape the daily fire raining from the skies from German bombers.

“One time a live bomb landed in our garden but it didn’t go off,” she said.

After that incident, Doster’s father moved the family to a flat outside of London.

“He said it seemed like Hitler was following us wherever we went. We might as well be back in London,” she said.

Doster soon left art school to join the war effort herself. Her sister, Sylvia, was working with intelligence operations in Italy and she hoped to do something equally important.

Doster was eventually added to a secret project, working with the Women’s Auxiliary Airforce in the classified Radar operations system, pinpointing where Nazi attacks were coming.

“It was called plotting. We would plot the movements on a table with a map so we could see exactly where the bombers were,” she said.

Many of those attacks came disturbingly close to many of the bases where she worked.

“They would usually drop eight bombs. And you could hear them coming closer to you,” she remembered. “You just hoped it wouldn’t get to you.”

During her time serving, Doster had many notable encounters with legendary fighter pilots. She even came face to face with British Prime Minister Winston Churchill himself, a chance encounter that still mortifies her today.

“We knew he was coming to tour the facility, but his entourage arrived earlier. He was an hour late. We were all very busy and they kept asking me all these questions: ‘What’s this for,’ ‘why are you doing that’ and so on. I tried to be polite but I was getting frustrated,” she said.

The questions continued as she tried to make a phone call from the operations room, something that was difficult to do even without the distractions and noise. So Doster did the best she could to try to communicate with her cohort on the other end of the line.

“I ducked my head under the desk because I couldn’t hear the woman with all of the noise. Then I felt a sharp jab in my back and this big booming voice said, ‘What are you doing?’ I hit my head on the desk, and that was the last straw,” she said.

“I had never lost my temper or yelled at anyone in my life, but I came up with the phone in my hand and yelled, ‘What does it look like I’m doing?’ Of course, I was staring right into the smiling face of Winston Churchill.”

That brought the noisy roomy to a dead silence.

“I said, ‘Sir, I’m so sorry.’ And he patted my shoulder and said, ‘I’m sorry, my dear, I didn’t mean to disturb you,’” she said. “Of course I was worried about what would happen to me. Would I be shot at dawn? I felt terrible. We all adored Churchill.”

Turns out, Churchill was quite forgiving — going about his business at the base then giving Doster a wink on his way out. It’s made for an amusing story ever since.

There were other moments of levity throughout the war. Of course, with any war, there was also a lot of pain. Doster lost a very close cousin to the fighting as well as her fiancé, Michael Cuddon, who was killed fighting in North Africa. But through it all, her resolve and that of England kept her going.

“I had sadness, but you had to cope with it because other people had sadness too. You couldn’t say, ‘Oh poor me,’ because something had happened to everyone. Everyone had lost someone and life changed for everyone,” she said.

Hope reemerged as the war began to wind down. But Doster remembers the official end as being anticlimactic.

“When D-Day finally happened, we were all exhilarated after six long years. The only fireworks we had were the rockets and flares we used for emergencies. The rockets were a bit dangerous because they had sticks attached so when the rockets went off we had to dodge the sticks,” she laughed. “But for me it just kind of ended with a whimper.”

After the war, Doster went on to become one of the first female flight attendants for the British Overseas Airways Corp., which became British Airways. She also met and married a Georgia native and Naval officer, George Doster. The couple eventually moved to St. Simons Island in the 1960s and raised five children.

Looking back on her experiences on the cusp of her 92nd birthday, Doster still feels pride for what she and her comrades accomplished and feels that, as a whole, humanity hasn’t lost that same collective sense of resolve.

“You had to have a still upper lip, even if it was trembling,” she said with a smile. “But we got through it. I think we survived because of Churchill. Churchill and tea.”

Reporter Lindsey Adkison writes about business and other local topics. Contact her at ladkison@thebrunswicknews.com on Facebook or at 265-8320 ext. 346.

"Her Finest Hour: One Teen's Personal War with Hitler's Germany, a Memoir" by Stephen Doster is available by contacting William Connor at A-Argus@live.com.

"He said it seemed like Hitler was following us wherever we went. We might as well be back in London."