Sign Up
Log In
Purchase a Subscription
You are the owner of this article.
Edit Article Add New Article
You have permission to edit this article.
Edit
Welcome, Guest
Home
FULL MENU
News
Life
Sports
Obits
e-Edition
Classifieds
Jobs
Events
Subscribe
1 of 4 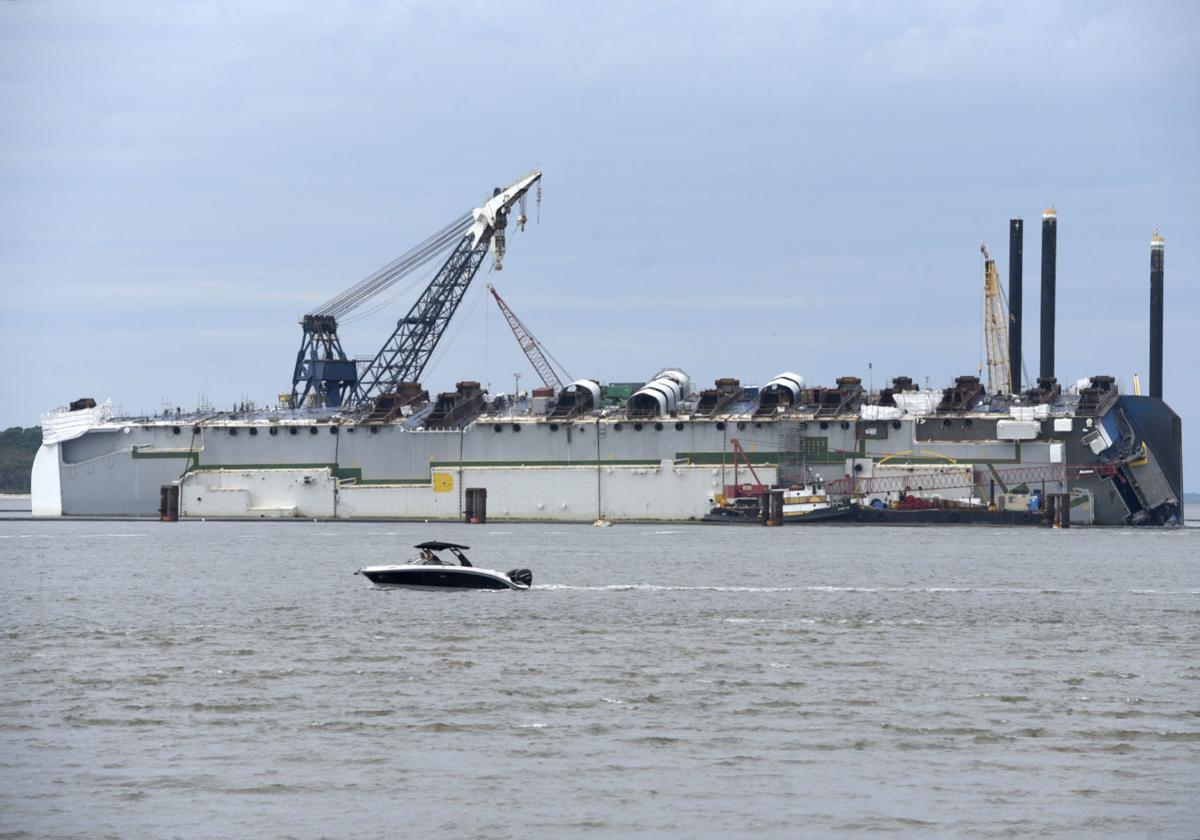 Work continues to remove the Golden Ray from St. Simons Sound on Wednesday. 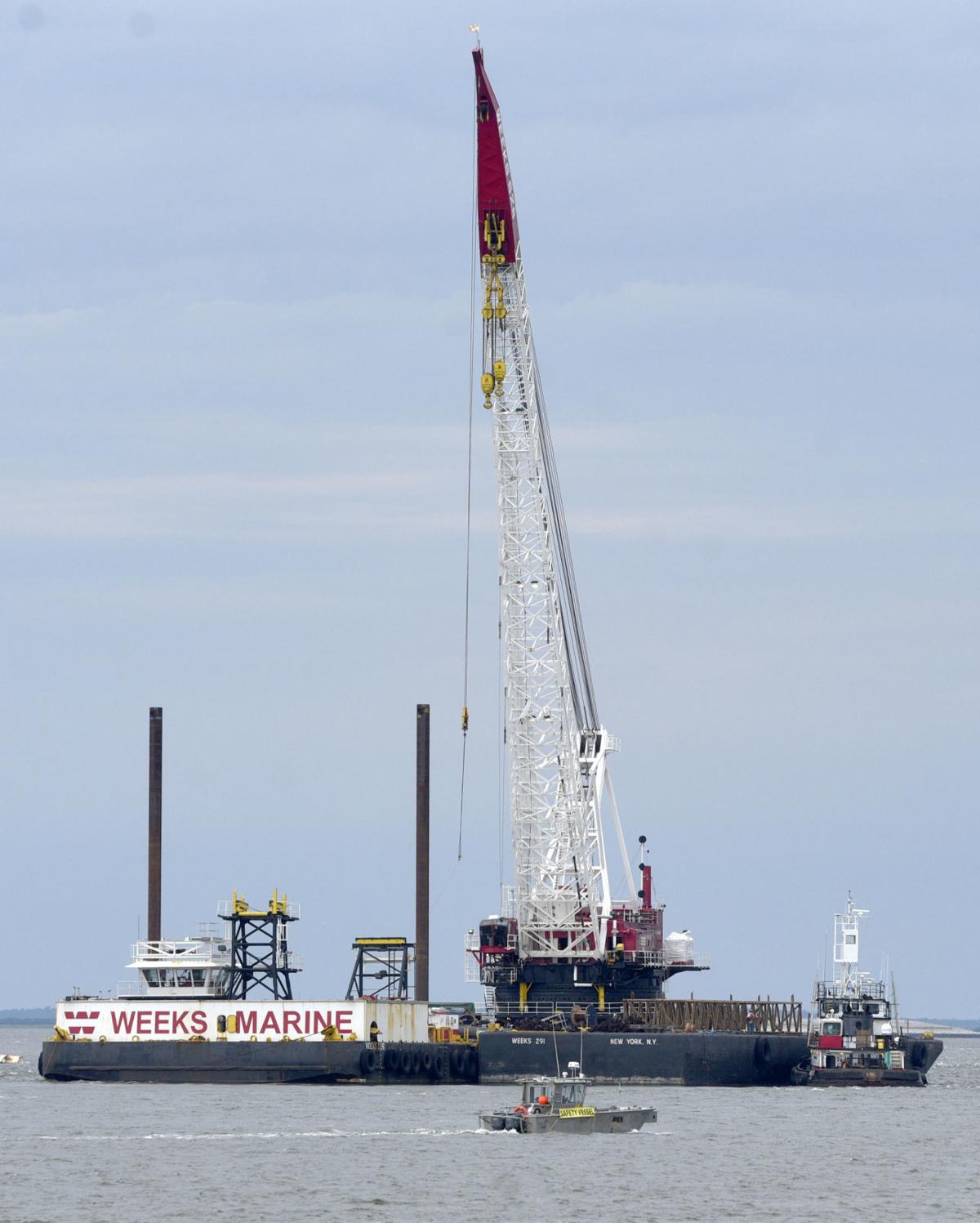 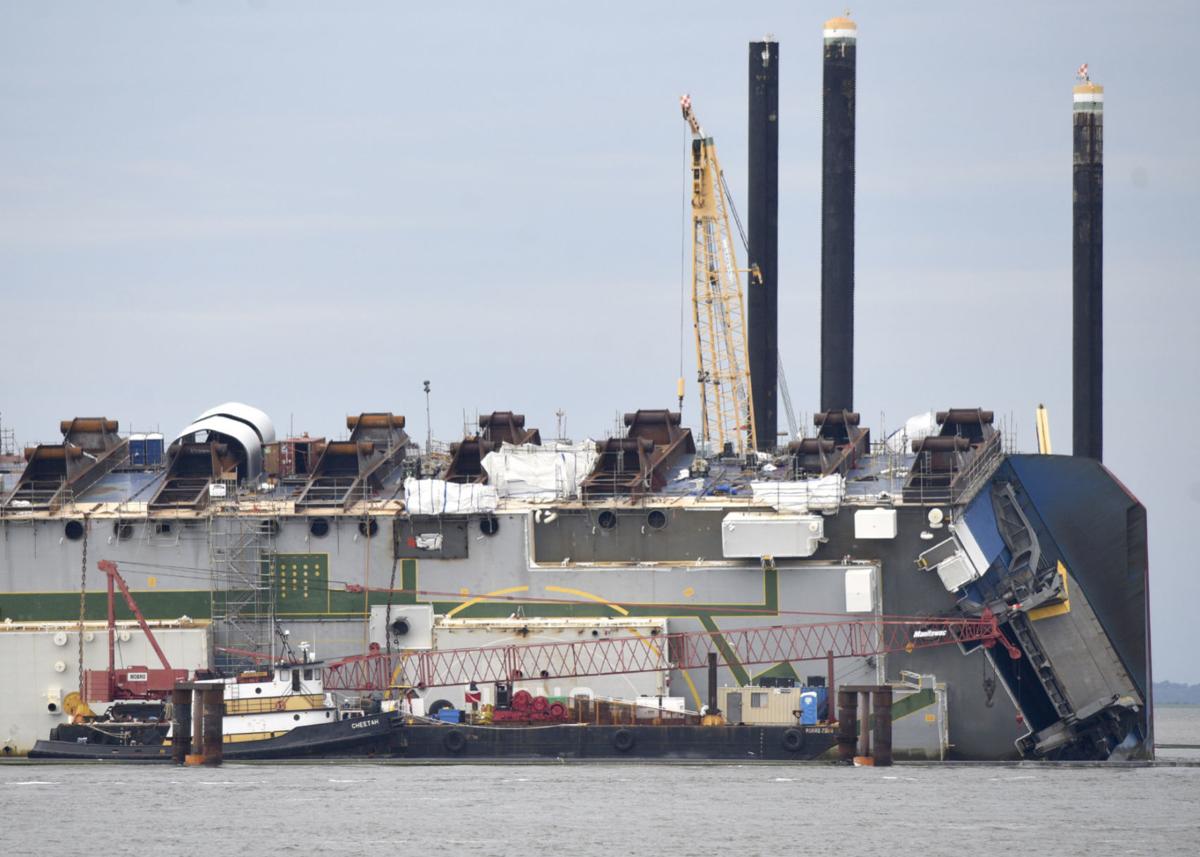 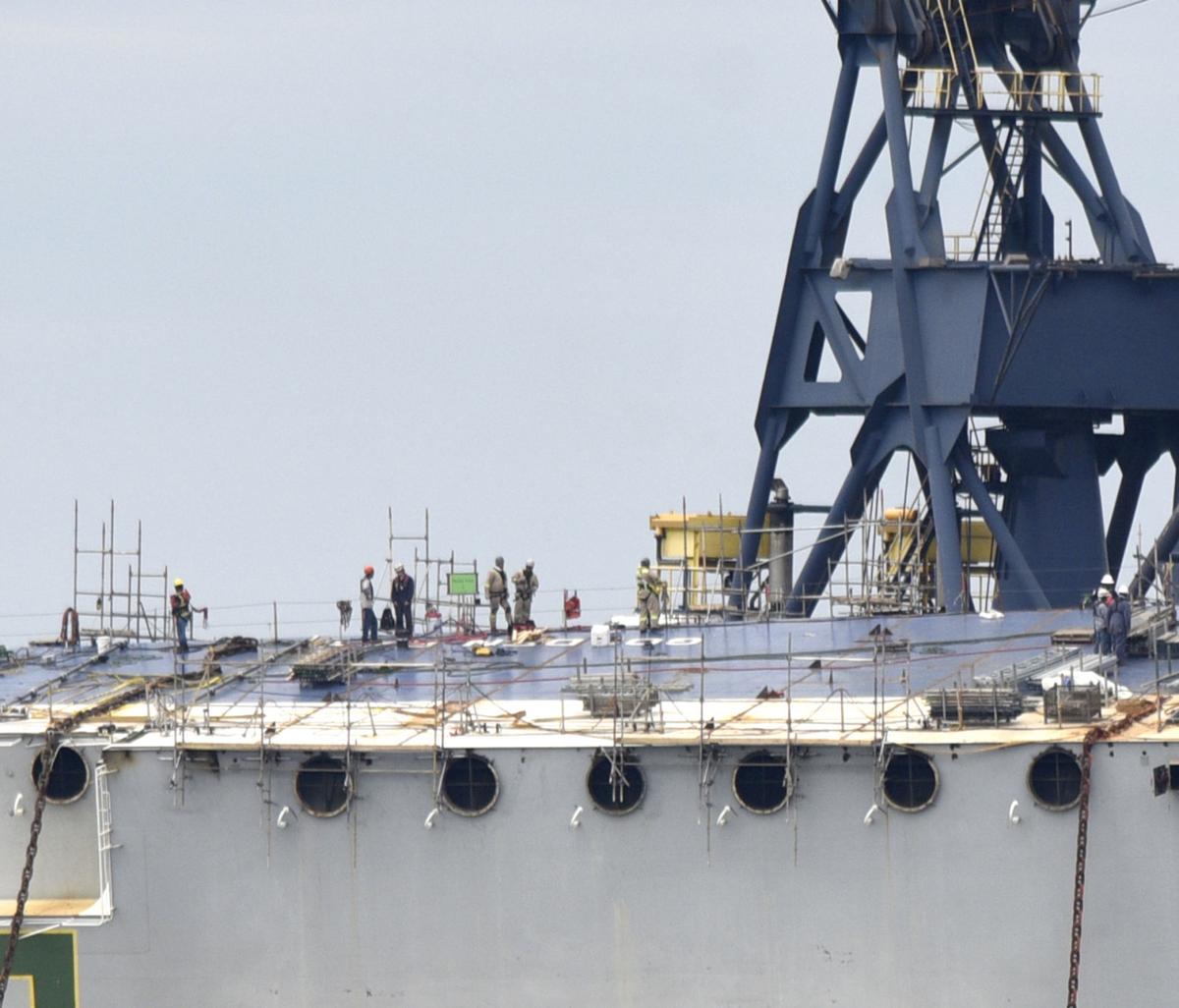 Work continues to remove the Golden Ray from St. Simons Sound on Wednesday.

And so the theme of really, really big hardware continues at the floating construction site that centers around the 656-foot-long shipwreck of the Golden Ray in the St. Simons Sound. Just one lifting lug piece that was secured to the exposed starboard hull of the ship Sunday weighs a whopping 39 tons. And that was only half of the 12th lifting lug.

Crews with T&T Salvage are working to attach the other half of the 12th lug, a task that may be completed by early next week, said Coast Guardsman John Miller, spokesman for Unified Command. Ultimately 16 of these hulking lifting lugs will be welded to the starboard side of the ship, which overturned in the sound on Sept. 6 while heading out to sea with a cargo of 4,200 new vehicles.

Each lifting lug is built to specification, meant to distribute the weight more evenly within the area it occupies. This will be crucial when chains attached to the lugs lift herculean slices of the ship from the water via a gargantuan crane barge, a mammoth task expected to begin sometime this summer. Crews are working around the clock to get the job done.

“It’s kind of a milestone, getting that first half of the 12th lug in there,” Miller said Thursday. “We’re just about there to have 75 percent of the lugs on. They are all built to unique specifications and are of different weights and sizes. But each piece weighs a couple of dozen tons or more, pretty much.”

High tech monitors are in place to gauge how the shipwreck’s hull is holding up to the extra weight on top of the ship’s starboard side. Thousands of tons of aggregate rock, and even weighted shipping containers, have been placed around the ship’s sunken portside hull over the past several months to further stabilize the ship.

“When you add that much weight to a ship that’s not designed for that, you have to keep a close watch on it,” Miller said. “But we’re monitoring it to make sure we’re not jeopardizing the integrity of the hull and the safety of the workers. It’s all technology and pretty dang precise.”

The sturdy nylon mesh netting is intended to catch debris that shakes loose during the cutting process, particularly the vehicles in the cargo hold.

The netting is distributed among 28 panels. Each is specially designed for its place in the barrier, accounting for water depth and other factors, Miller said. The panels will cover a 5,000-foot perimeter around the ship. Each will be attached between support piles, which were placed in connected pairs.

“The interesting thing is no one has ever done this kind of thing before,” Miller said of the complex barrier. “It’s remarkable.”

The bottom of the netting will be held in place by weights attached to anchor chains, approximately 30 pounds per foot along the bottoms, Miller said. Scuba divers will secure the netting, but they will be limited to only a couple of hours under water per day due to the sound’s swift-flowing tides, Miller said.

The panels will be stretched into position for placement by a special spreading bar designed specifically for the task.

“These engineers are amazing,” Miller said. “They are literally, like, building new tools for every situation. The spreader bar picks up the panel and stretches it out and places it between the pilings. The divers will affix the panels of netting to the pilings.”

The panels will be attached at the surface to 148-foot-long floating pipes that have been placed to connect each pairings of piles.

Unified command hopes to have all the panels in place within three to four weeks, Miller said.

Though sturdy, the netting material is soft to prevent injury to marine life, he said. Its holes are of a size that will catch debris but allow marine life to pass safely, he said.

“The gaps are five-foot squares designed to allow turtles and other wildlife to swim through,” Miller said. “It looks kind of like a seatbelt, but it is really soft – neither the corners nor the edges are sharp so as not to injure marine life that may pass through.”

On the surface, an oil pollution boom will be attached to the outside of the 36-inch in diameter floating pipes. The booms consist of an inflated synthetic fabric that will rise 18 inches above the water, with a vinyl skirt dropping 34 inches below the surface.

Workers spent several months pumping out most but not all of the estimated 380,000 gallons of oil from the Golden Ray’s fuel tanks.

All of this leads up to the arrival of the VB 10,000, the 240-foot tall barge crane that will do all the heavy lifting and extreme cutting. For comparison, the road surface of the Sidney Lanier Bridge attains a height of just 185 feet.

The dual-hulled VB 10,000 rises to a steel-girded center arch that supports the heavy lifting with a “hook height” of 178 feet.

The barge will begin its journey here from Port Arthur, Texas, in mid-June via a pair of towboats, Miller said. It will enter the environmental protection barrier through a gate, and it will then move into place to straddle the shipwreck.

Like everything else, the barge is specially designed – in this case, high walls to prevent pollutants and debris from spilling over the sides.

Weather and other conditions permitting, Unified Command hopes to have the VB 10,000 in place within six to eight weeks. The command aims to remove the bulk of the shipwreck before the onset of peak hurricane season, typically from August to October.

“We’re trying to get everything done, prepped and staged,” he said. “So once the Versabar (10,000) does get here, they can get it in there and get in place and it can start cutting. That’s depending on some contingencies, but we’re aspiring to begin that phase in six to eight weeks.”