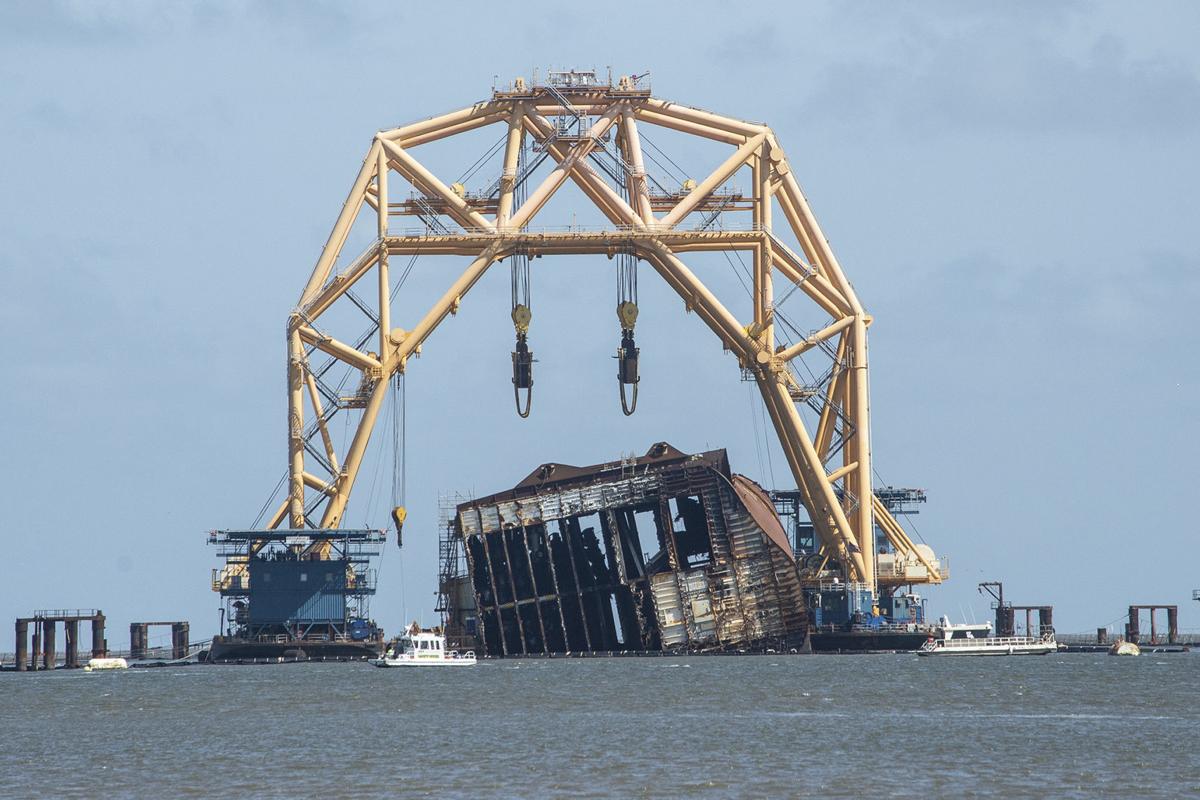 The VB 10,000 is undergoing maintenance before the next cut begins on the remains of the Golden Ray. 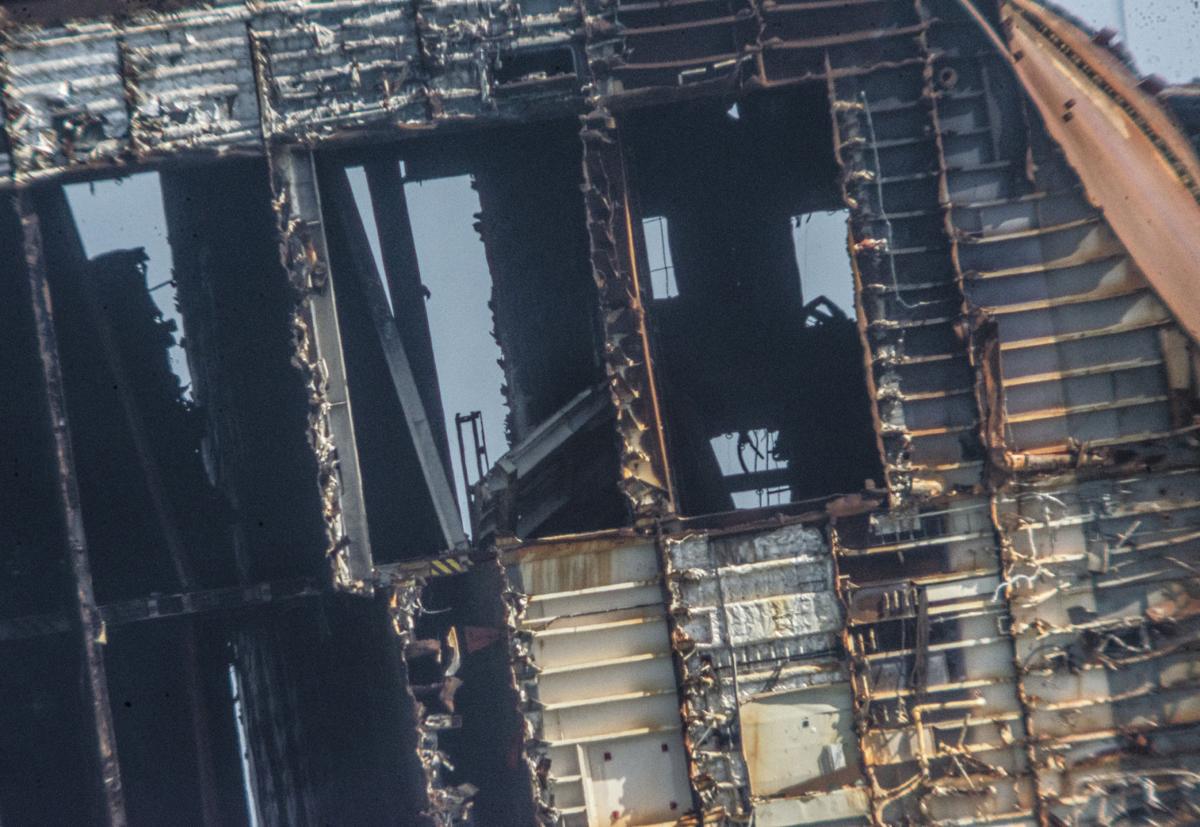 The VB 10,000 is undergoing maintenance before the next cut begins on the remains of the Golden Ray.

At certain angles, the sun now shines from one end to the other of the dwindling remains of the shipwrecked Golden Ray.

But that does not necessarily signal a light at the end of the tunnel for the ongoing herculean task of removing this gargantuan steel scrap-heap from the St. Simons Sound. Maintenance and refitting on the VB 10,000 will continue for at least another week before the crane barge begins its next-to-last cut into the shipwreck, according to Unified Command.

With the 3,640-metric-ton Section 3 having been removed earlier this month, about 227 feet of the shipwreck remains half-submerged between St. Simons and Jekyll islands.

The Golden Ray was 656 feet long when it capsized onto its port side on Sept. 8, 2019 while heading out to sea from the Port of Brunswick with a cargo of 4,200 vehicles.

The VB 10,000 and the cutting chain it powers have sheared through and removed five gargantuan sections since cutting on the shipwreck began in November. That leaves two more cuts and three sections remaining.

But there is much work to be done on the VB 10,000 before it can begin cutting on Section 6, said U.S. Coast Guardsman Michael Himes, spokesman for Unified Command.

“You can now see through what remains of the wreck,” Himes said. “From the earliest estimates I’ve heard, cutting could begin as soon as the end of next week. Right now, they’re still going through the whole system to inspect it for wear and recommend any needed repairs.”

The 255-foot-tall VB 10,000 is anchored to the east of the shipwreck’s remains during the maintenance work. The biggest task has been lowering the crane vessel’s giant pulleys that play such a key role in powering the cutting chain in its trek up through the shipwreck sections, Himes said.

Crown pulleys are secured high in the arches of the VB 10,000. Traveling pulleys hang below from the wiring, connecting the cutting chain to the system that powers it, he said.

All are being lowered to the deck of a barge, stationed between the VB 10,000’s twin hulls, he said. Some of the pulleys are being worked out, replaced with pulleys that were trucked to Houston, Texas, for repairs early last month, he said. Other pulleys will have to be switched from one side to the other, accommodating the needs of cutting at the opposite end of the shipwreck, Himes said.

Much of the wiring also is being replaced. Other equipment is being repaired or replaced as needed.

Thousands of feet of wiring wind through the VB 10,000’s rigging, connecting the chains to the winches.

“It can take half a day just to bring one of the pulleys down,” Himes said. “They have moved pulleys from one arch to the other so they can line them up properly. The chain, the traveling blocks (pulleys), the wires, the crown blocks, they bring all those down as well. They’re going through the whole system to inspect for wear and tear and to recommend any needed repairs.”

Some observers have questioned whether the stability can be maintained as the chain continues applying upward cutting force against a shipwreck that gets increasingly smaller and, by turns, lighter.

That is not an issue, Himes said. The upward force of the cutting chain averages between 200 and 400 tons, he said. Each of the remaining three sections weigh between 3,500 and 4,000 metric tons, he said.

A chief officer on the Golden Ray got his math wrong when calculating the stability of the ship and its cargo of 4,161 vehicles, causing the 656-foot-long car carrier to capsize in the St. Simons Sound on Sept. 8, 2019, the National Transportation Safety Board affirmed Tuesday.

A top officer's errors in calculating the stability of a cargo ship loaded with nearly 4,200 automobiles likely caused the giant vessel to overturn along the Georgia coast, U.S. investigators said in a report Tuesday.

Brunswick is among five Georgia cities recognized with the Sustainable Futures Award for the way the city is approaching housing issues.