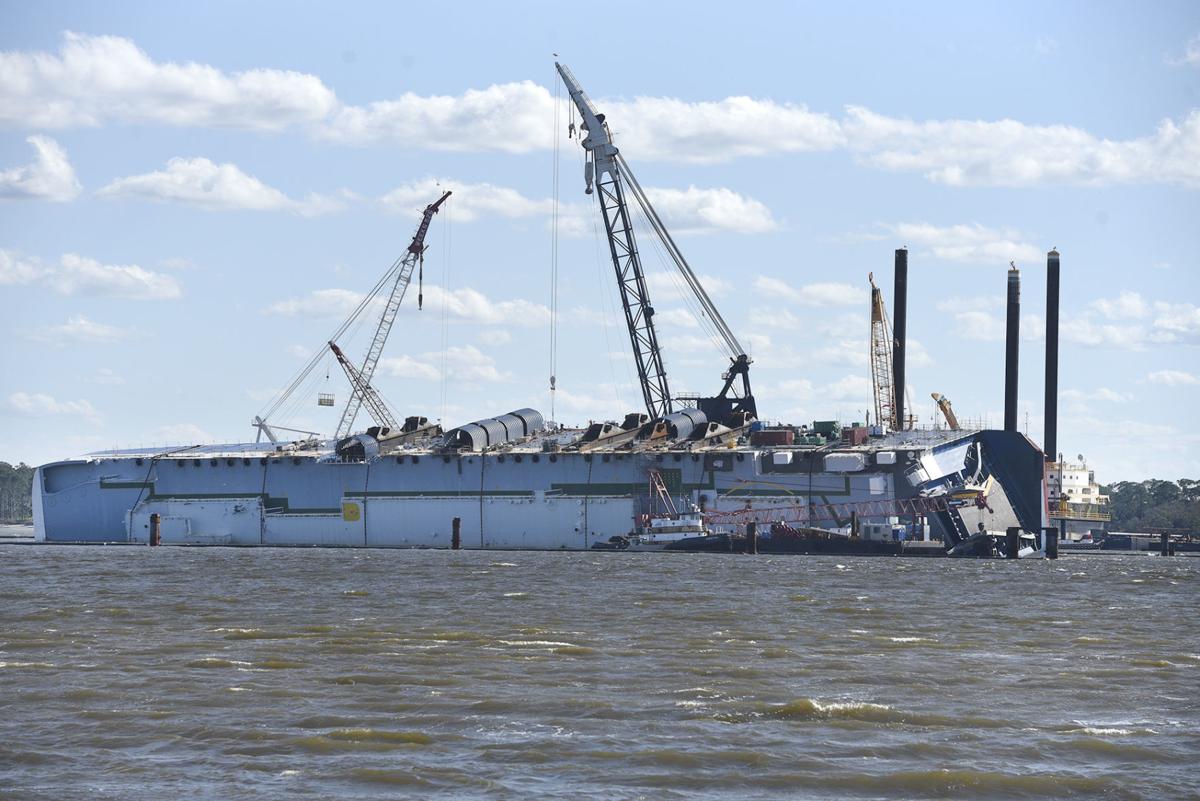 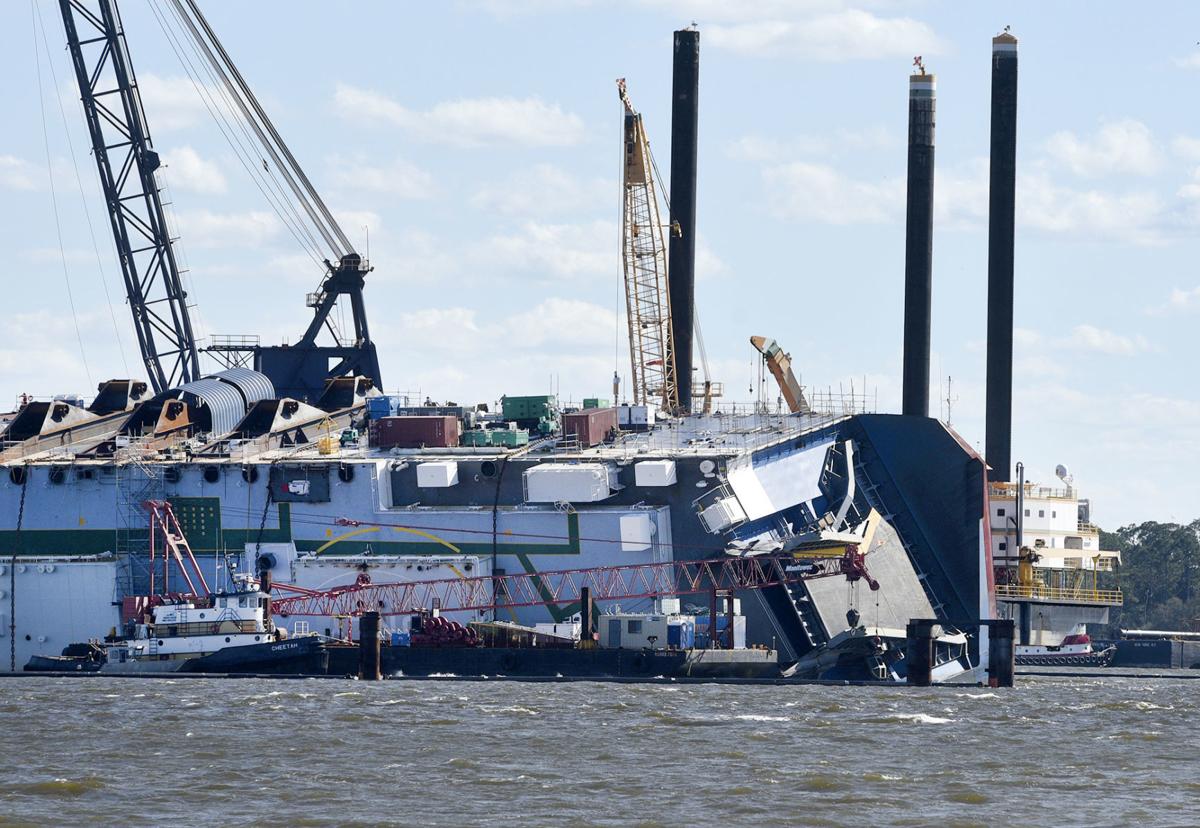 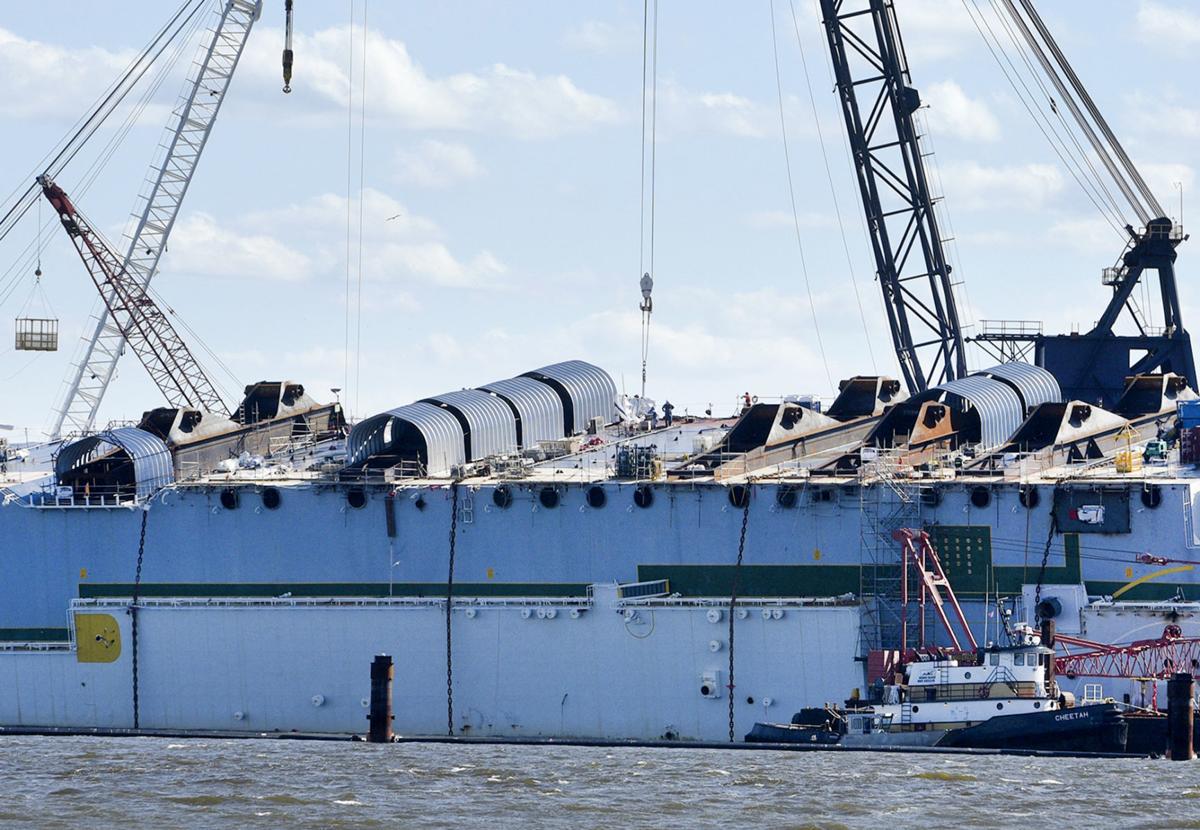 Crews continue to work on the Golden Ray on Thursday. 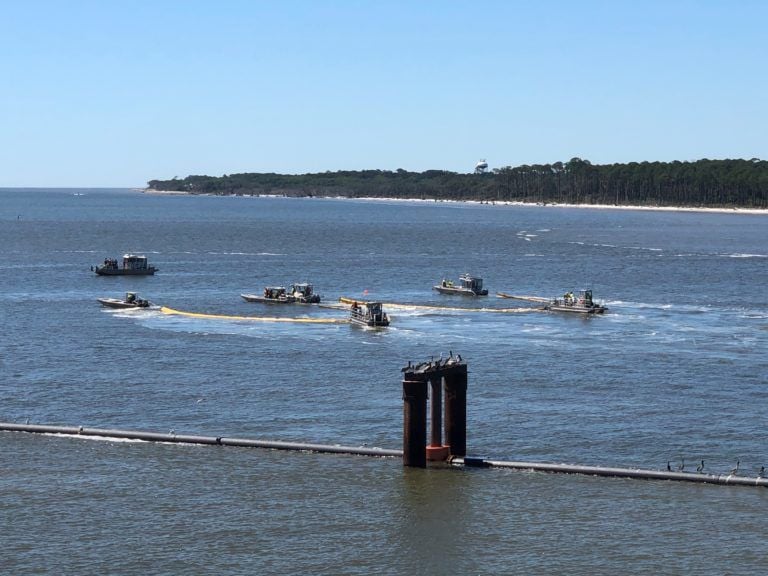 Crews continue to work on the Golden Ray on Thursday.

The massive, complex and multifaceted endeavor to remove a 656-foot-long shipwreck from the St. Simons Sound continues at a steady pace, but officials overseeing the project are now less certain about a specific completion date.

Unified Command had said since early February that it hoped to the have the bulk of the overturned freighter Golden Ray removed by peak hurricane season. With the June 1 start of the hurricane season now a month away, Unified Command’s most specific answer Thursday was that contractors are progressing as quickly as possible while maintaining worker safety and protection of the estuary.

Contractors are working to complete a 33-acre environmental barrier around the Golden Ray, which has sat half-submerged on its port side in the sound between St. Simons and Jekyll islands for nearly seven months. Workers also are preparing to install the sixth of 16 lifting lugs, onto which chains attached to a gargantuan crane will attempt to lift the shipwreck out in pieces.

“We would like to be able to assign a certain end date, but this is a massive undertaking,” said Coast Guardsman Kip Wadlow, a spokesman for Unified Command. “We are trying to do everything as safely as possible and to make sure there are no injuries to crew members or damage to the environment. We are doing everything we can to safely remove the Golden Ray. We are working as quickly and as safely as possible.”

Unified Command consists of the Coast Guard, the Georgia Department of Natural Resources and Gallagher Marine Systems. It is responsible for ensuring the Golden Ray’s owner and insurer abide by the environmental guidelines set forth in the federal Oil Pollution Act of 1990.

The ship’s owner hired T&T Salvaging for the removal. Weeks Marine is the subcontractor constructing the environmental protection barrier.

Work on the barrier began Feb. 22. It will encircle the shipwreck in an underwater mesh netting and a pollution retention surface boom.

All 80 of the barriers’ 140-foot-long support piles have been driven deep in the sound’s sandy bed, placed in pairs. Most of the 36-inch diameter polymer pipes that serve as surface boom have been put in place, Wadlow said. The floating pipes stretch from one pairing of piles to the next, with an attached vinyl skirt that stretches a few below the water.

Work to install the panels of mesh netting, which are designed to catch any debris that shakes loose when the cutting process begins, has not begun. The Golden Ray carried a cargo of some 4,200 vehicles onboard when it capsized while heading out to sea Sept. 6 of last year.

Meanwhile, work continues on getting all 16 lifting lugs in place on the 25,000-ton ship’s exposed starboard hull. Thus far, T&T Salvage has installed five of the lifting lugs, each especially designed to best handle weight distribution on its particular section of the hull.

“The sixth lug has arrived this week,” Wadlow said. “They may look similar in shape but there is a different design specification for each. They are being manufactured at various locations within the U.S. and Europe. Once everything is in place, we will probably be within 48 to 72 hours of attaching the sixth lug to the Golden Ray.”

All ongoing work is in preparation for the arrival of the VB 10,000. The dual-hulled, arching crane barge is 240 feet high. It will enter the barrier through a gate and straddle the shipwreck. A giant chainsaw attached to the VB 10,000 will slice the ship into eight pieces. The crane will then lift each piece from the water – via chains attached to the specified lifting lugs – and place it on a specially-designed barge for transport to a recycling facility in Louisiana.

Wadlow could not give an estimated arrival date for the VB 10,000, which will be towed here from the Gulf of Mexico in a journey of 10 days.

However, the project’s cleanup crews hit the waters around the shipwreck Monday in a flotilla of surface skimmer boats for an emergency response drill. The crews will be on the water, inside and outside the barrier, during the ship’s removal efforts. The crews plan to respond immediately to any oil or pollution discharges that occur during the cutting, Wadlow said.

Each of the seven cuts through the hull will take up to 24 hours of nonstop cutting.

“It’s a like a sports team,” Wadlow said of Monday’s drill. “You’re going to play like you practice. So this exercise provides them a chance to practice what they would do during an actual incident, to make sure they are able to use the equipment and execute the plan in the best possible way. Also, it’s an opportunity for Unified Command to assess our current plans and identify any areas of concerns.”