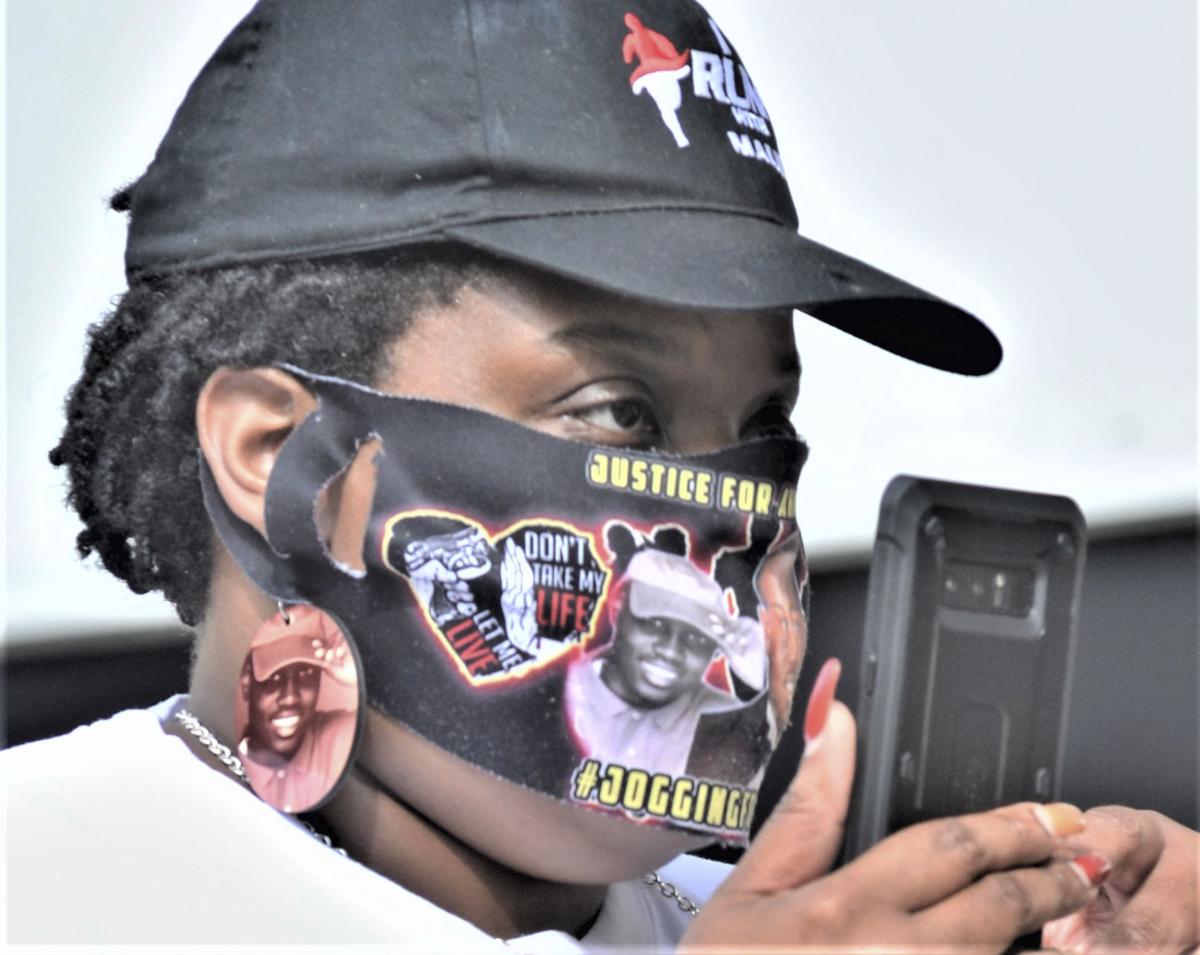 Ahmaud Arbery’s aunt, Thea Brooks, wore his likeness on earrings, her cap, her face mask and a T-shirt as she videoed Tuesday a news conference by Community First Planning Commission’s legal committee calling for change. 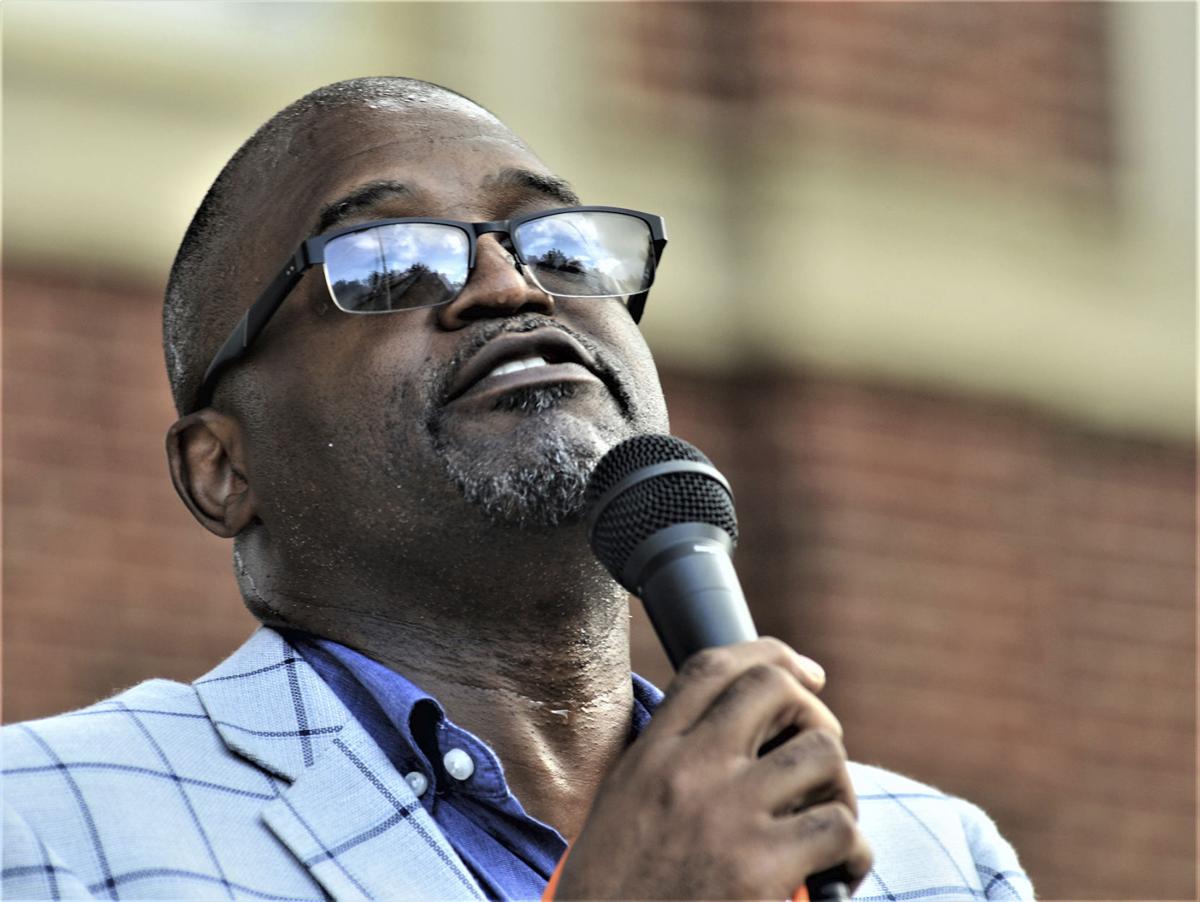 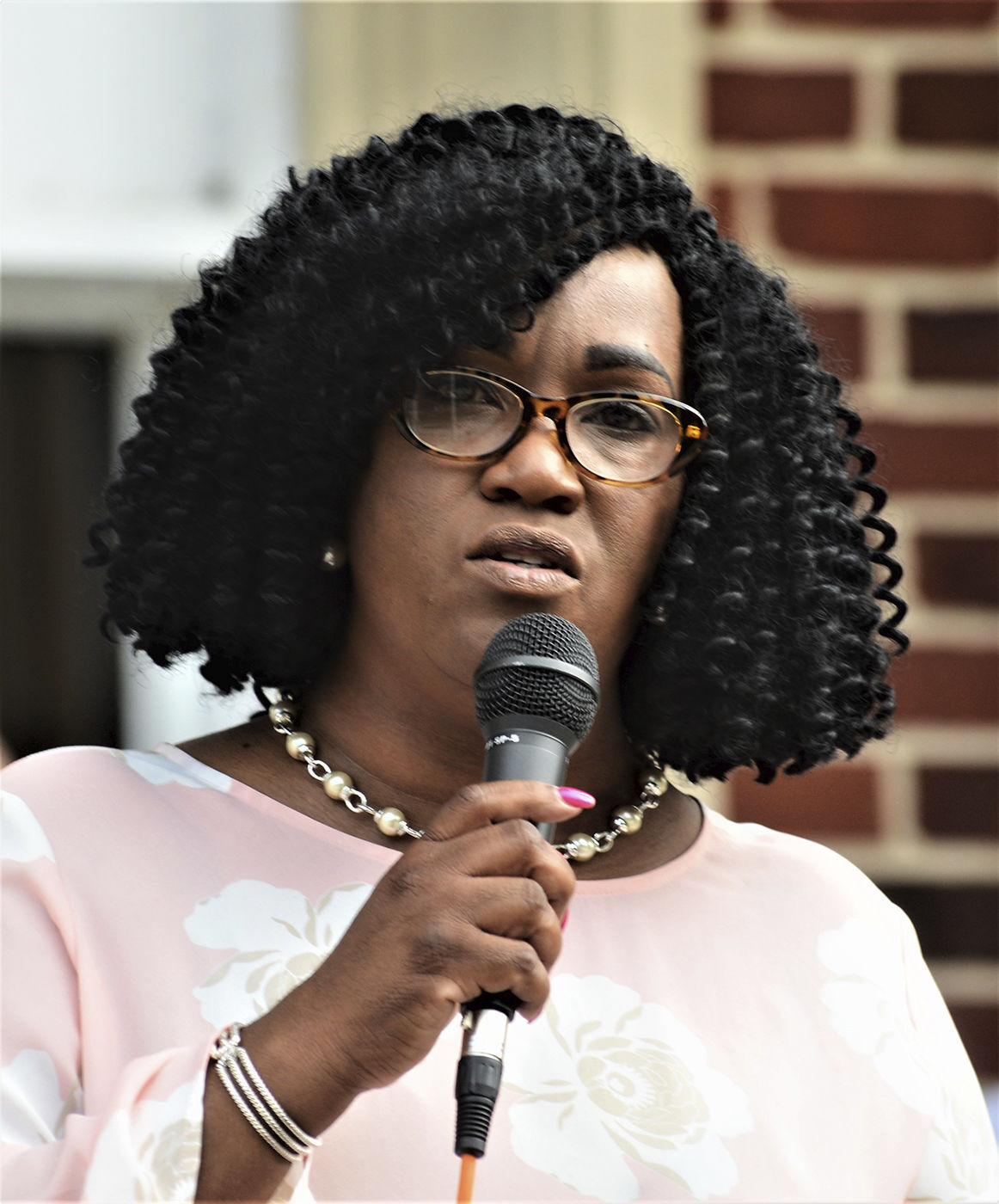 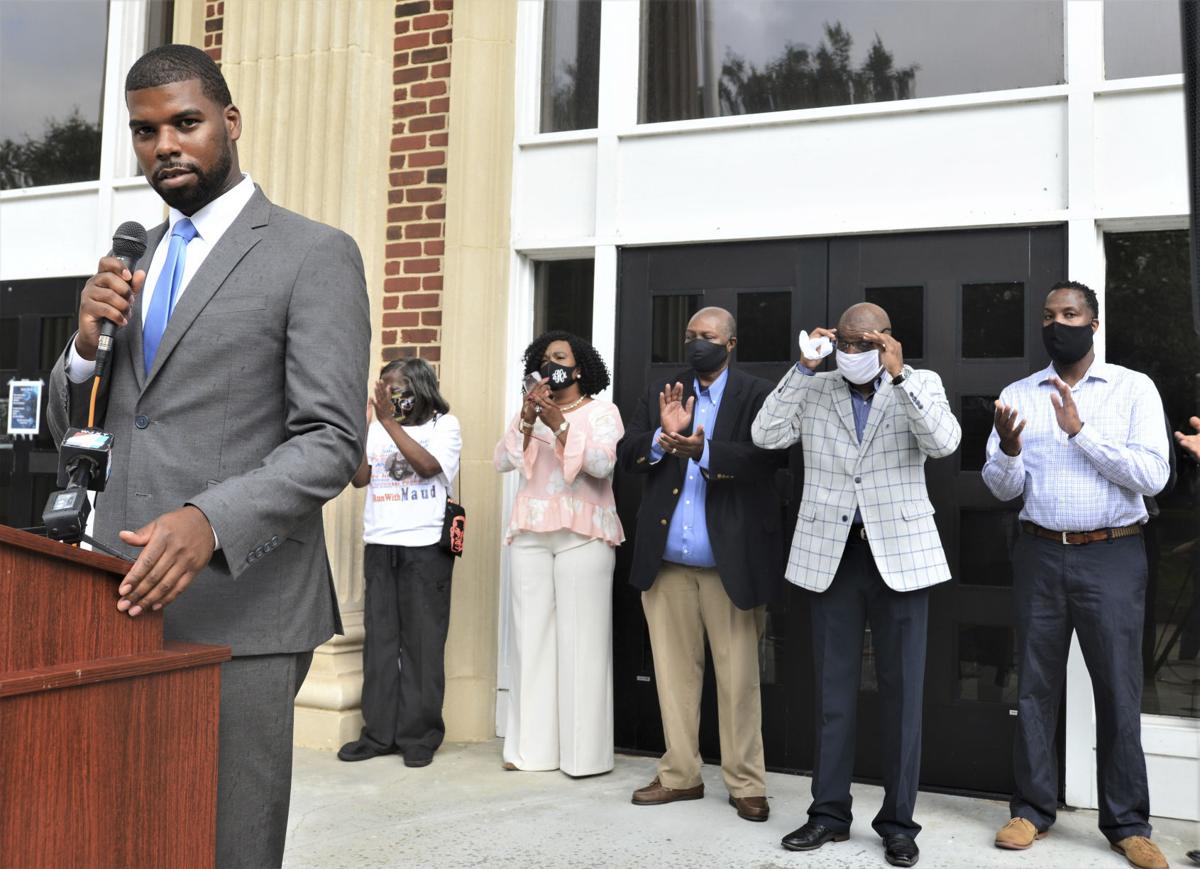 Christopher Bruce, political director of the ACLU of Georgia, spoke on the need to respond to the U.S. Census as others listen.

Ahmaud Arbery’s aunt, Thea Brooks, wore his likeness on earrings, her cap, her face mask and a T-shirt as she videoed Tuesday a news conference by Community First Planning Commission’s legal committee calling for change.

Christopher Bruce, political director of the ACLU of Georgia, spoke on the need to respond to the U.S. Census as others listen.

It’s been nearly seven months since Ahmaud Arbery was killed while jogging in the Satilla Shores neighborhood, and community leaders, members of Ahmaud Arbery’s family and the Georgia ACLU are tired of waiting for the government to react.

Darren West, pastor and chair of the Community First Planning Commission’s legal committee, called for “systemic change” at the Glynn County Police Department to restore trust between police and the African American community in the wake of the Feb. 23 slaying of Arbery at the hands of Satilla Shores residents Gregory McMichael and his adult son, Travis McMichael.

Arbery was jogging through the Satilla Shores when he was confronted and eventually shot by the McMichaels. William “Roddie” Bryan filmed the incident.

Arbery died at the scene. The McMichaels and Bryan, all three of whom remain in the Glynn County Detention Center on a charge of murder, are White. Arbery was Black.

Glynn County police officers did not arrest the McMichaels at the scene — a decision made based on advice from the Brunswick Judicial Circuit District Attorney’s office, county government officials claim. Brunswick DA Jackie Johnson, who recused herself from the investigation, has denied the claim.

The Georgia Bureau of Investigation entered the investigation after a video by Bryan surfaced, and the GBI arrested the three men in May.

Chief among the changes West wanted to see was the creation of a citizen oversight panel to review complaints against police and recommend disciplinary action. He also noted the GCPD has never had a Black police chief or even considered appointing a Black police chief.

While not specifically calling for action, West said he had learned in conversations with Glynn County commissioners that the body cams employed by GCPD officers allow footage to be deleted before the cameras are turned in.

“I don’t know if I’m supposed to say that, but I’m saying it anyway,” West said.

GCPD Chief Jay Wiggins recently told the police advisory panel he is asking for new body cams that will prevent tampering. The request was published in The News.

The GCPD is not the only organization West called out. He and ACLU Political Director Christopher Bruce called on Brunswick Judicial Circuit District Attorney Jackie Johnson and Waycross Judicial Circuit District Attorney George Barnhill, who advised county police the McMichaels should not be charged in the shooting, to step down from their positions.

The two DAs have been under pressure to resign for months since word of the case reached the ears of civil rights and activist groups.

Bruce also brought state officials into the mix, demanding along with West that more information be released about the GBI’s investigation into the shooting. Brunswick has waited long enough, he said.

Little news about the investigation has surfaced since the case reached nationwide attention, West said, leading Community First, the state branch of the ACLU and Arbery’s family, among others, to call on Gov. Brian Kemp, Lt. Gov. Geoff Duncan and Georgia Attorney General Chris Carr to speak publicly about the shooting and to update the public on the investigation’s progress.

The case passed through the hands of three district attorneys before reaching Cobb County DA Joyette Holmes, who is currently investigating the shooting in cooperation with the GBI.

“Your silence is deafening,” West said.

West said Glynn County commissioners have not shown a willingness to move ahead with a citizen board to oversee complaints against county police officers.

The idea had been pitched as a way to hold individual officers publicly accountable by tasking an oversight committee with recommending certain disciplinary actions to the county commission, he explained.

West said Commissioner Browning, in particular, has been dragging his feet, attributing the lack of movement to Browning’s election loss in the race against Sammy Tostensen in the June Republican primary election.

Browning said after the press conference that he recalled receiving a call from someone wanting to discuss an oversight committee, but said he told them what he tells everyone: to request a spot at the commission’s next meeting.

“That’s how we handle things if people want to talk to the board and tell us what’s on their mind,” Browning said.

Browning did not recall discussing the particular issue with West but said he would not have treated the request differently than any other.

West and Bruce asked everyone to fill out the 2020 Census and to remember to vote. Census data is routinely used in doling out federal and state funds to communities and schools, Bruce said. The only surefire way for African American communities’ voices to be heard in politics is through the ballot box, he added.