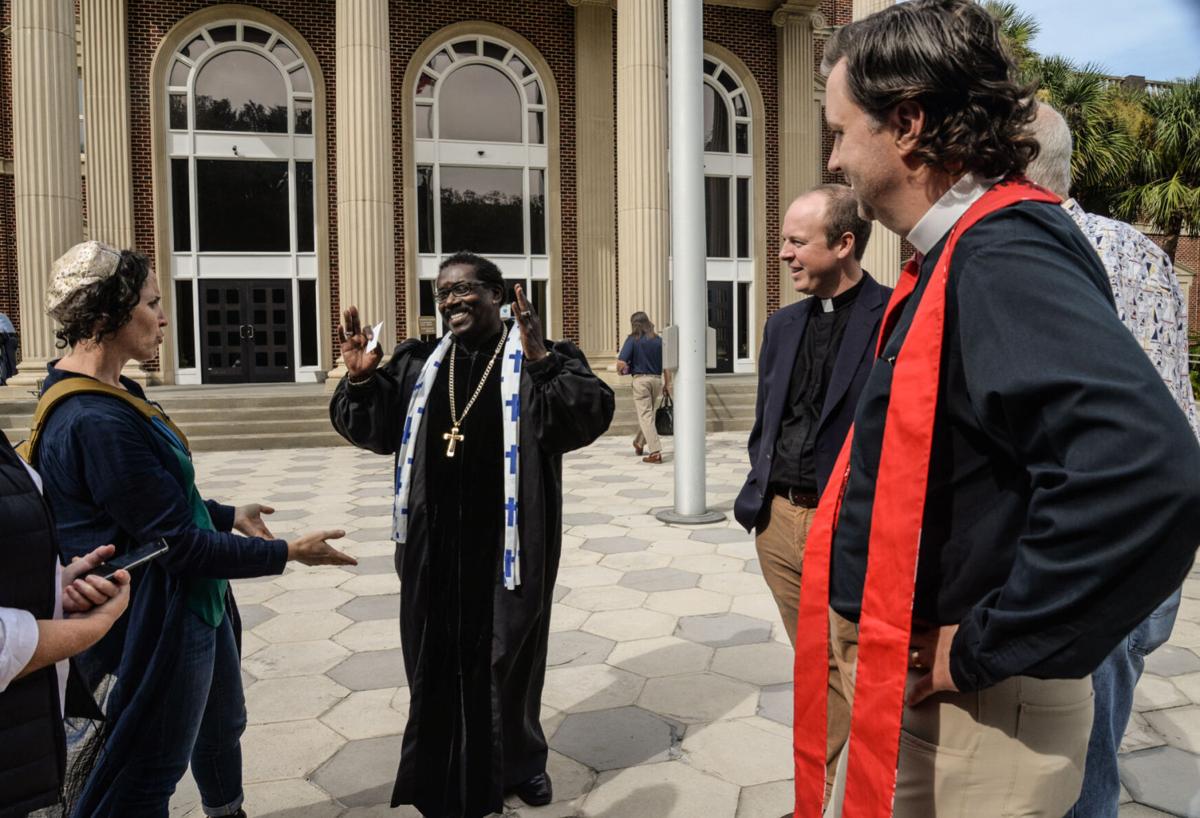 Rabbi Rachael Bregman, left, of Temple Beth Tefilloh in Brunswick, along with Rev. Alan Dyer, third from left, pastor of St. Simons Presbyterian Church, and Father Tom Purdy, right, rector of Christ Church Frederica, greet the Rev. Raymond Johnson of Mt. Pisgah Baptist Church in Marion, S.C., after he arrived at the Glynn County Courthouse on Monday afternoon on the first day of jury selection for three men charged with murder in the shooting death of Ahmaud Arbery. 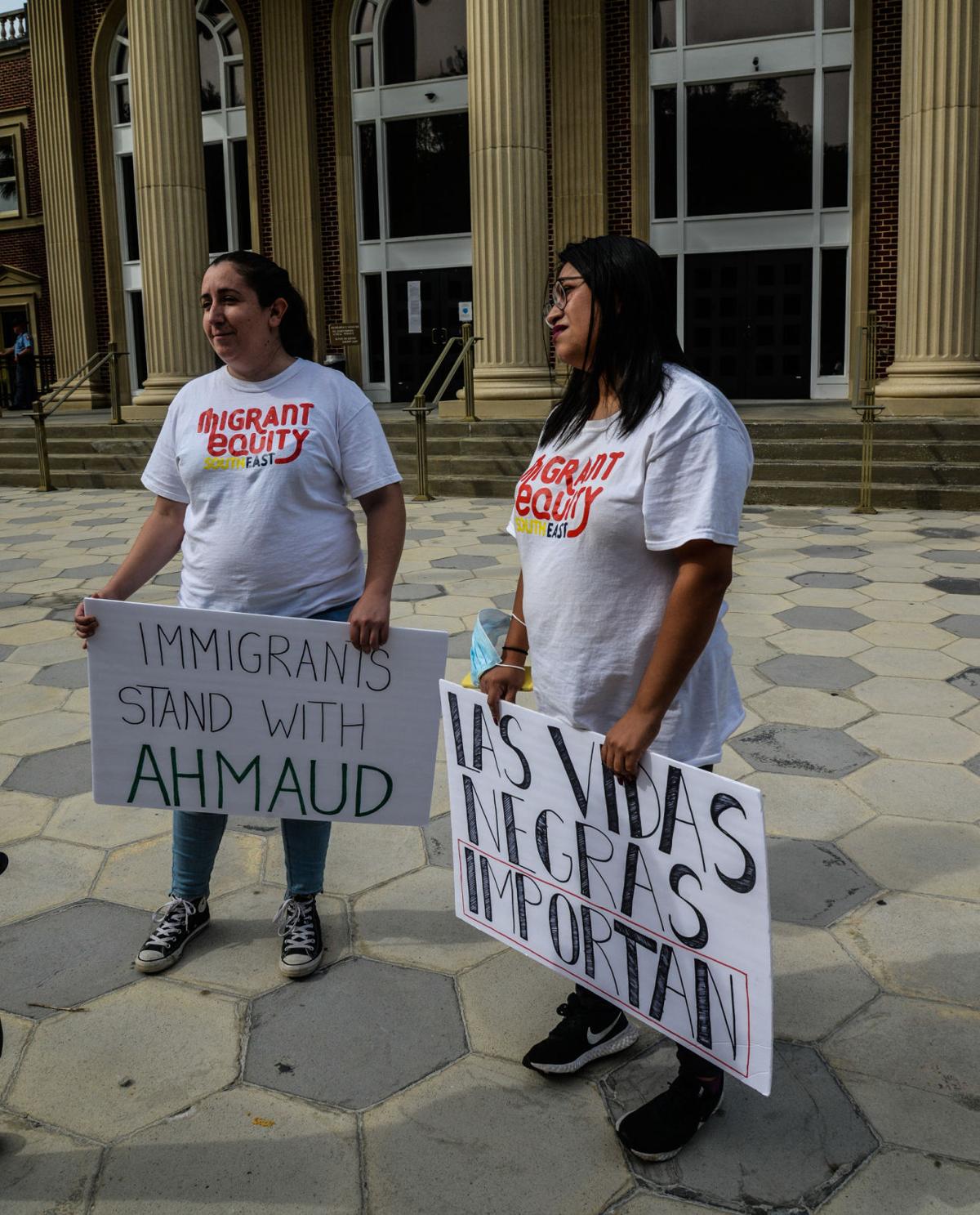 Rabbi Rachael Bregman, left, of Temple Beth Tefilloh in Brunswick, along with Rev. Alan Dyer, third from left, pastor of St. Simons Presbyterian Church, and Father Tom Purdy, right, rector of Christ Church Frederica, greet the Rev. Raymond Johnson of Mt. Pisgah Baptist Church in Marion, S.C., after he arrived at the Glynn County Courthouse on Monday afternoon on the first day of jury selection for three men charged with murder in the shooting death of Ahmaud Arbery.

A single-file line of 20 Glynn County citizens walked briskly down the hallway leading to the county courthouse’s Jury Assembly Room at around 1:20 p.m. Monday, marking the beginning of efforts to meld a local jury to decide the fate of three White men accused of murder in the February 2020 killing of a 25-year-old Black man.

This assembly represented the first group to undergo the scrutiny of defense and prosecution attorneys in what promises to be a long and arduous jury selection process for the murder trial of Travis McMichael, Gregory McMichael and William “ Roddie” Bryan. The three men stand accused of felony murder in the shooting death of unarmed Ahmaud Arbery on the Sunday afternoon of Feb. 23, 2020, on a public street in the Satilla Shores neighborhood.

Based on the initial rounds of questioning, the Superior Court Clerk’s decision to mail jury summonses for this trial to 1,000 residents appears to have been a wise one. That is about six time the normal mailings.

When prosecuting attorney Linda Dunikoski asked for a show of hands whether any among them wished to serve on the jury, initially none rose. Finally, one earnest-looking young man in a suit and tie raised a hand to show interest in serving on the jury.

When Judge Timothy Walmsley asked whether any among them was “completely neutral” regarding the case, only one person raised a hand.

In answer to another question, half indicated they had already formed an opinion on the case. In response to a question from defense attorney Jason Sheffield, more than half indicated negative feelings regarding the three defendants.

“I know her from being around,” she said. “But not personally.”

When individual questioning of the potential jurors began that afternoon, a retired accountant and auditor expressed little sympathy with the defendants’ claim of self-defense in the course of a citizen’s arrest. The woman said she has followed the case closely through newspapers and television news.

“It’s hard for me to believe that there is a law that says that a citizen can shoot down another one because he thinks something happened,” she told the judge and lawyers. “I just don’t understand citizen’s arrest.”

The state’s citizen’s arrest law has since been rewritten, as a direct result of this deadly incident. Gregory McMichael and son Travis McMichael armed themselves, jumped in a pickup truck and pursued Arbery after he ran past their home on Satilla Drive that afternoon. Bryan joined the pursuit in his own pickup truck when he saw Arbery run past his home with the McMichaels in pursuit.

Bryan used his cellphone to record the bloody conclusion, when Travis McMichael shot the unarmed Arbery three times at close range with a 12-gauge shotgun as the two men struggled for possession of the gun. The video stirred national outrage and cries of racial injustice when it went viral online in May of that year. Georgia Bureau of Investigation agents arrested the McMichaels on May 7 and Bryan on May 20. The McMichaels said they suspected Arbery of burglarizing a nearby home that was under construction.

The retired accountant did express sympathy for Arbery.

“A man died, and so, yeah, I have a pretty negative feeling about that,” she said at one point. “I think Mr. Arbery was probably in terror. I’m trying to be honest here.”

She also was honest with her thoughts about Travis McMichael’s actions.

“I guess I would call it murder,” she said.

An Air Force veteran and gun owner said during individual questioning that he finds particular fault with the actions of Gregory McMichael, 65. While Travis McMichael fired the three rounds of buckshot that killed Arbery, the veteran viewed the father as the instigator. According to the Glynn County Police report, Gregory McMichael was outside their Satilla Drive home when he saw Arbery run past. He told county police he ran inside, grabbed his .357 magnum handgun and instructed his son to arm himself before both men jumped into the pickup to pursue Arbery.

“From what I observed, he appeared to be the lead dog,” the man said.

Gregory McMichael had been an investigator with the Brunswick District Attorney’s Office for 20 years before retiring in 2019 and had served as a county police officer for seven years before that.

In the end, however, the man said he had not decided on the elder McMichael’s guilt or innocence.

Yet another panelist admitted to being inundated with information about the case. He has seen the chilling video of Arbery’s shooting and shared it with others. He has followed the case intently through news outlets and social media.

He said he has expressed opinions about the defendants.

“Yes, I have said that they were guilty,” he said.

Despite this, the man said he does not have a definitive opinion regarding their guilt on innocence.

“I really don’t care what happens,” he said.

The individual questioning of the first group of panelists went into the night. They had been called from among the first 200 prospective jurors who were summoned to report Monday morning to the gymnasium at nearby Selden Park. The Selden Park gym is being used as the initial location for jury summonsing to accommodate large crowds and maintain COVID-19 social distancing.

Those smaller groups who gathered in the courthouse’s Jury Assembly Room are instructed to sit 6 feet apart. Because only 36 people are allowed to gather at once in the room, some members of the media and family members had to wait in the courthouse’s second-floor lobby. A pool of two journalists were allowed to sit in on the jury selection process: one with the Associated Press and one with CNN.

All total, some 600 potential jurors responded to the Selden Park gym Monday. In the end, Judge Walmsley dismissed eight potential jurors before adjourning Monday night. Four were interviewed, leaving eight more to be interviewed when the process resumes at 8 a.m. Tuesday.

As the questioning continued into the afternoon Monday, the chorus from a group of demonstrators outside the courthouse echoed the emotional fervor that has placed this case in the national spotlight.

“Say his name!” a woman called out.

“Ahmaud Aurbery!” was the crowd’s response.