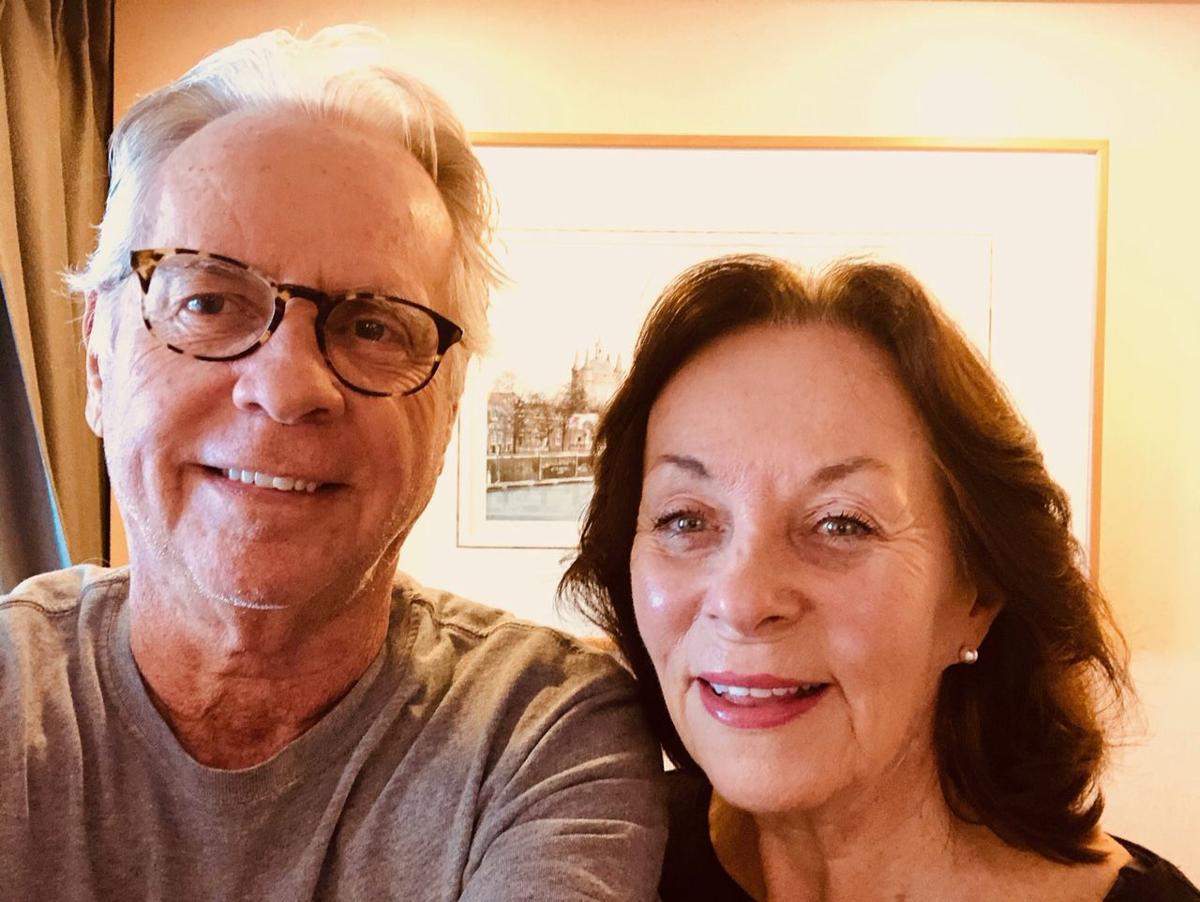 Bob and Jennifer Broadus are pictured aboard the Rotterdam as they hope to make their way back to Glynn County soon. 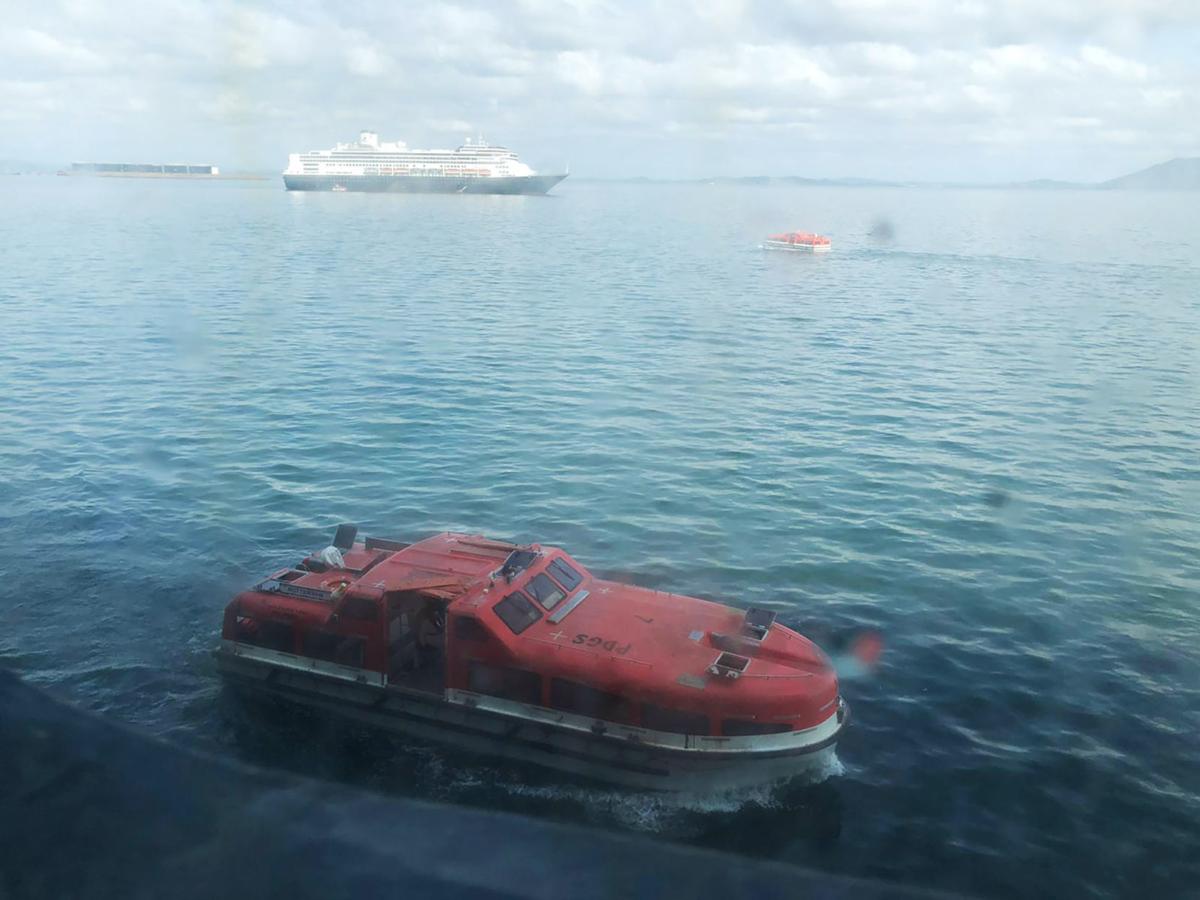 In this Saturday, March 28, 2020 photo made available by Juan Huergo, a tender approaches the Zaandam, a Holland America cruise ship off Panama. The tender transferred passengers from the Zaandam to the Rotterdam (background). The Zaandam has many passengers experiencing flu-like symptoms. Florida Gov. Ron DeSantis said Monday, March 30, 2020, that it would be a mistake to bring passengers from the Zandaam to Florida. He said the area's hospital beds need to be saved for residents and not "foreign nationals." (Juan Huergo via AP) 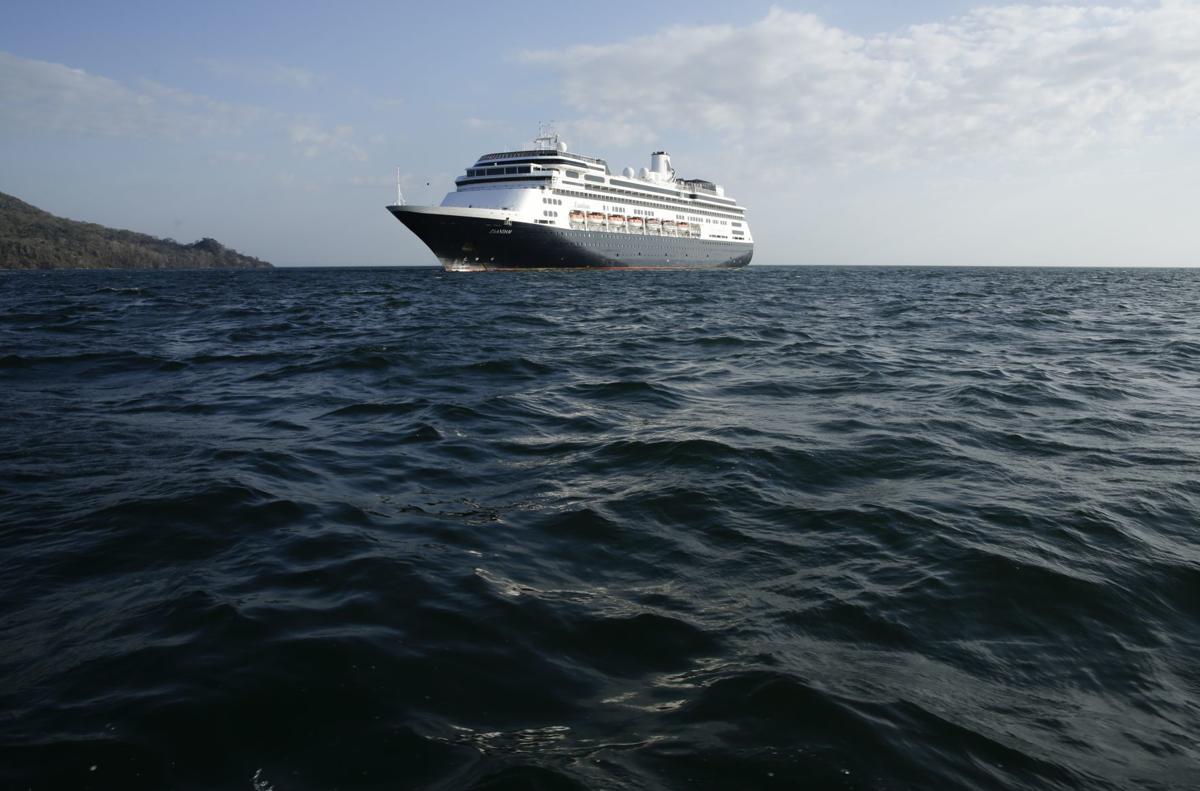 The Zaandam cruise ship is anchored in the bay of Panama City on Friday. Several passengers have died aboard the cruise ship and a few people aboard the ship have tested positive for the new coronavirus, the cruise line said Friday, with hundreds of passengers unsure how long they will remain at sea.

Bob and Jennifer Broadus are pictured aboard the Rotterdam as they hope to make their way back to Glynn County soon.

In this Saturday, March 28, 2020 photo made available by Juan Huergo, a tender approaches the Zaandam, a Holland America cruise ship off Panama. The tender transferred passengers from the Zaandam to the Rotterdam (background). The Zaandam has many passengers experiencing flu-like symptoms. Florida Gov. Ron DeSantis said Monday, March 30, 2020, that it would be a mistake to bring passengers from the Zandaam to Florida. He said the area's hospital beds need to be saved for residents and not "foreign nationals." (Juan Huergo via AP)

The Zaandam cruise ship is anchored in the bay of Panama City on Friday. Several passengers have died aboard the cruise ship and a few people aboard the ship have tested positive for the new coronavirus, the cruise line said Friday, with hundreds of passengers unsure how long they will remain at sea.

Jennifer and Bob Broadus have always loved to travel. A while back, the St. Simons Island couple began planning a dream vaca — a 14-day cruise from aboard the Zaandam, traveling from Buenos Aires around the Horn of South America to Santiago, Chile.

The two left on March 7. All was going according to plan until the coronoavirus pandemic engulfed the Earth. As the crisis intensified, once friendly ports transformed into unfriendly sightseeing stops, and cruise ships began returning to home ports.

For the Broaduses’ ship, however, that was easier said than done.

“(The trip) was cut short seven days in, on March 13, by (cruise company) Holland America Line when Chile refused us port of entry at Punta Arenas. This city is one of the most remote places on the planet, literally the bottom of the world, just above the Antarctic Circle,” Jennifer Broadus said, messaging from sea.

“It became clear we must quickly get to a friendly port for disembarkation and flights home. Chile, which is also in great internal political turmoil, refused us entry anywhere.”

Initially, the conditions were good aboard the ship and the passengers healthy as it journeyed on in search of a hospitable harbor.

Everything changed on March 22 — which was also the couple’s 45th wedding anniversary.

“The captain announced at 2 p.m. that we must immediately return to our rooms as we were being isolated for our own protection because of occurrences of influenza like symptoms by guests and crew,” she said.

“This epidemic began to show growing occurrences particularly with the crew population. There were no test kits to know what we actually had here.”

The couple and the rest of the travelers were confined to their rooms, with food (and even some libations) being deposited at the door by the crew. Passengers were only allowed to leave for a 30-minute walk around the promenade deck.

The ship, while not permitted to dock, was sent supplies. That included coronavirus testing kits. Once testing began, it became clear that there was indeed an outbreak aboard the ship.

At least two cases were known, she said, adding, “since kits are so limited, there’s no doubt there are many more. The bad news is that the (illness) traveled quickly through the crew population and since they are housed in such close density in the bowels of the ship — many, many are sick,” she said.

“We learned a couple of days ago about 40 percent of the crew are affected, or about 230 crew members. Needless to say, the ship’s ability to service guests was greatly limited. We don’t exactly know how many passengers are sick — last count was about 40, maybe more.”

On Friday, the cruise line sent a sister ship to remove the healthy passengers, an estimated 780 people, from the Zaandam. The Broaduses, neither of whom have symptoms, were shifted over to a new vessel, the Rotterdam.

“This leaves approximately 465 guests still on the Zaandam. It is important to note that not all of these guests are sick...many older and mobility challenged guests could not make the difficult transition by tender boat in rough seas,” she said.

“We had to carry our own bags down a very steep metal stairs beside the ship onto a bobbing dock and then step on to a tender boat at rough seas. It was hard even for us.”

As the situation continues to unfold, misinformation rolls out much like the unending waves beneath them. Reports leak out to various outlets and posts whiz through social media channels.

One of those, Broadus says, concerns the four deaths reported on the ship — but, she notes, not all are being attributed to the virus.

“We learned this from a crew member: One (death) from COVID, one from a heart attack, one from a tragic fall in the shower and another by an unknown cause. This is not what national news is reporting ... not all four died from COVID,” she said.

The Broaduses remain unshaken, even with the knowledge that death has touched their ship. As frequent travelers, the thought of traversing the course with deceased passengers in tow is not entirely unfamiliar.

“This is not the first time we’ve been on a cruise that has lost passengers. Since cruising is popular with a senior demographic, it happens. All large ships have a morgue, a morbid thought, I know,” she said.

The Rotterdam is currently situated in the sea beside the Zaandam. In spite of the dire situation, the Broaduses feel the company is doing its best during these very difficult circumstances.

“I am confident every effort is been made to take care of remaining guests and control the disease spreading. Holland America has been very vigilant during this difficult time ... it’s very important to note that. There’s a lot of false narratives out there,” Broadus said.

The couple remains in good spirits despite not having stepped onto dry land in 18 days. They are passing the time with books, cards and Yahtzee, as well as movies and television.

“We are trying to stay positive, keep busy, stay in touch with friends and stay healthy. Sanitation is key to everything we do. We now have masks,” she said.

“Thankfully, I brought a lot of wet wipes, which have really been helpful with infection control in our room especially with food trays.”

The Broaduses have been told that they are heading for the Columbian island of San Andreas, which is in the middle of the Gulf of Mexico, with plans to resupply the ship via an air drop at some point.

“That is how heroic the efforts now are,” she said.

They are hoping that rumors on board the ship are true and that they will soon head to Fort Lauderdale or Cape Canaveral, where they can disembark and finally head home. The cruise line, however, has declined to announce any plans until they are set in stone. In recent reports, Florida Gov. Ron DeSantis was firmly resistant to the idea.

According to The Associated Press, DeSantis says it would be “a mistake” to bring the passengers from Holland America’s Zaandaam onshore for treatment because South Florida already has a high number of new coronavirus infections and that rate is growing. He said the area’s hospital beds need to be saved for residents and not “foreign nationals.”

While the Broaduses remain in limbo, the two are incredibly grateful for their health.

“Our mental health is fine. We are healthy,” she said.”We have a good network of fellow passengers who we chat with regularly, vent, and share some laughs as we are all in the same boat, pardon the pun. We still don’t know when we will get home. It’s the not knowing that is the hardest thing.”