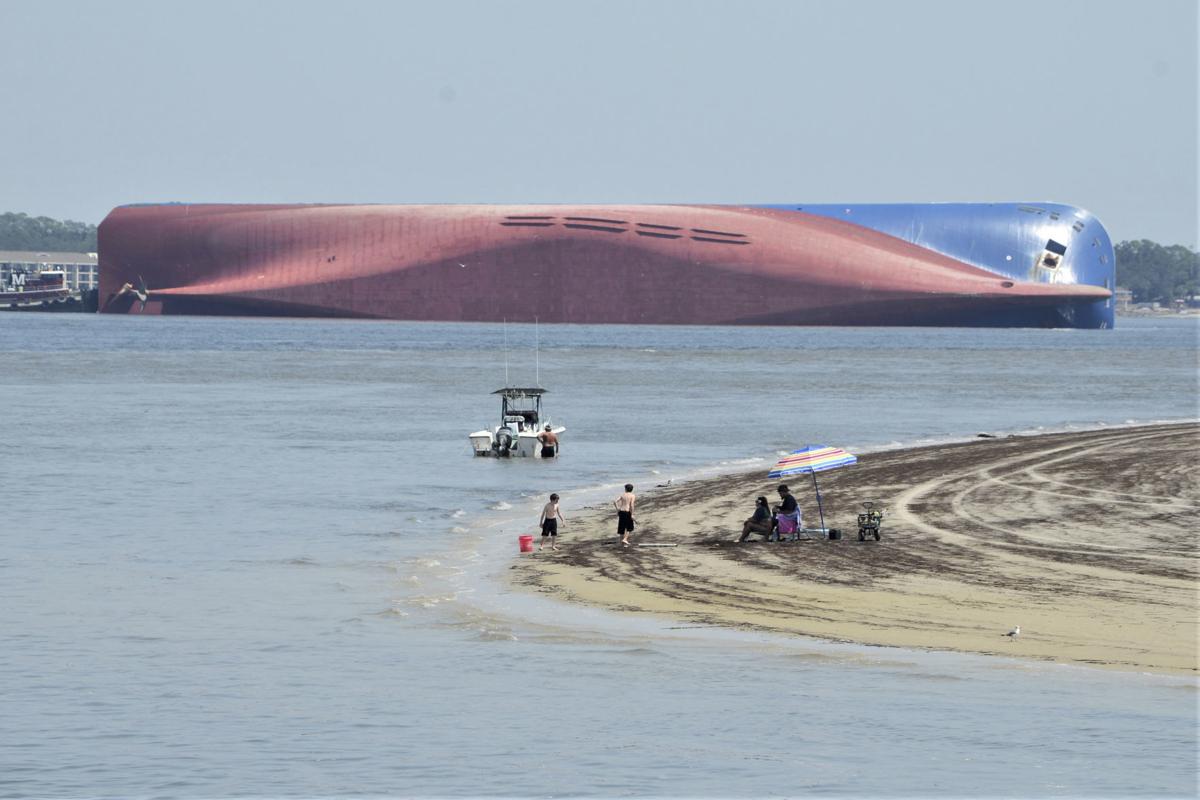 The hull of the capsized Golden Ray was visible from the Jekyll Island fishing pier. 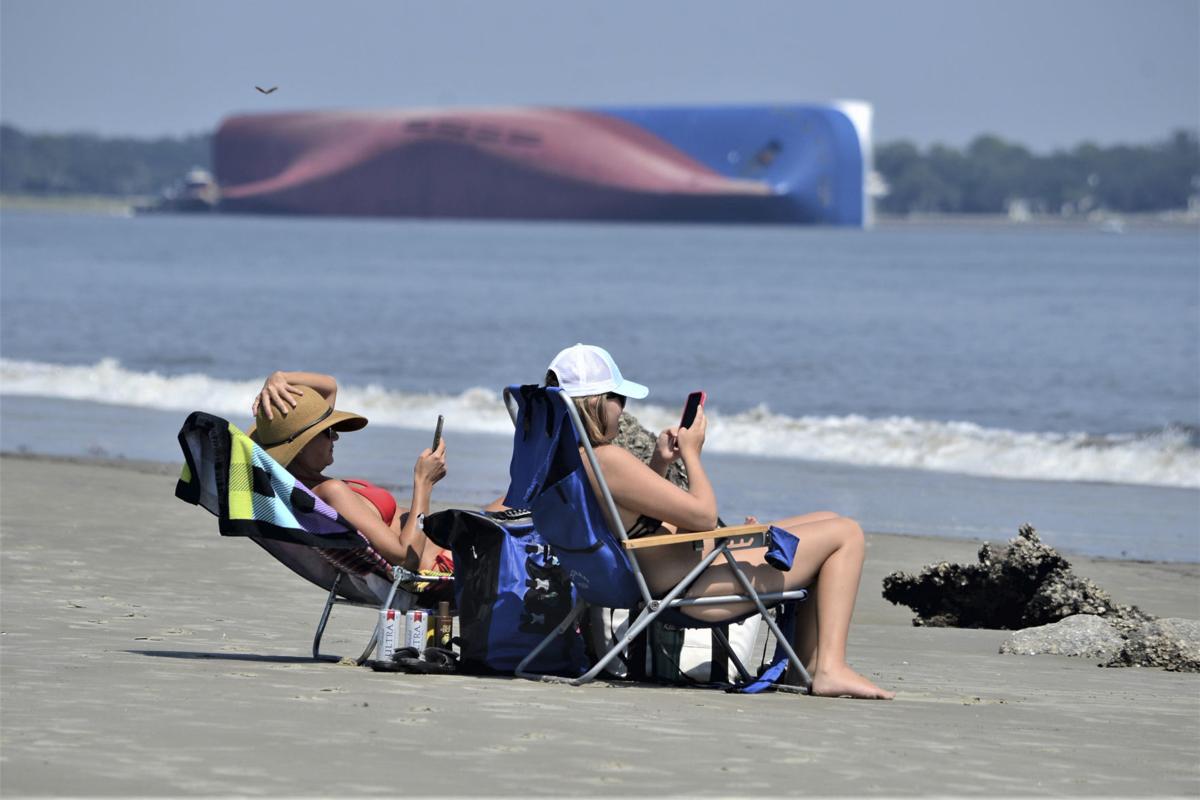 Rachel Mitchell, left, and her daughter Sarah send messages from Driftwood Beach on Jekyll Island with the capsized Golden Ray lying on its side in St. Simons Sound. 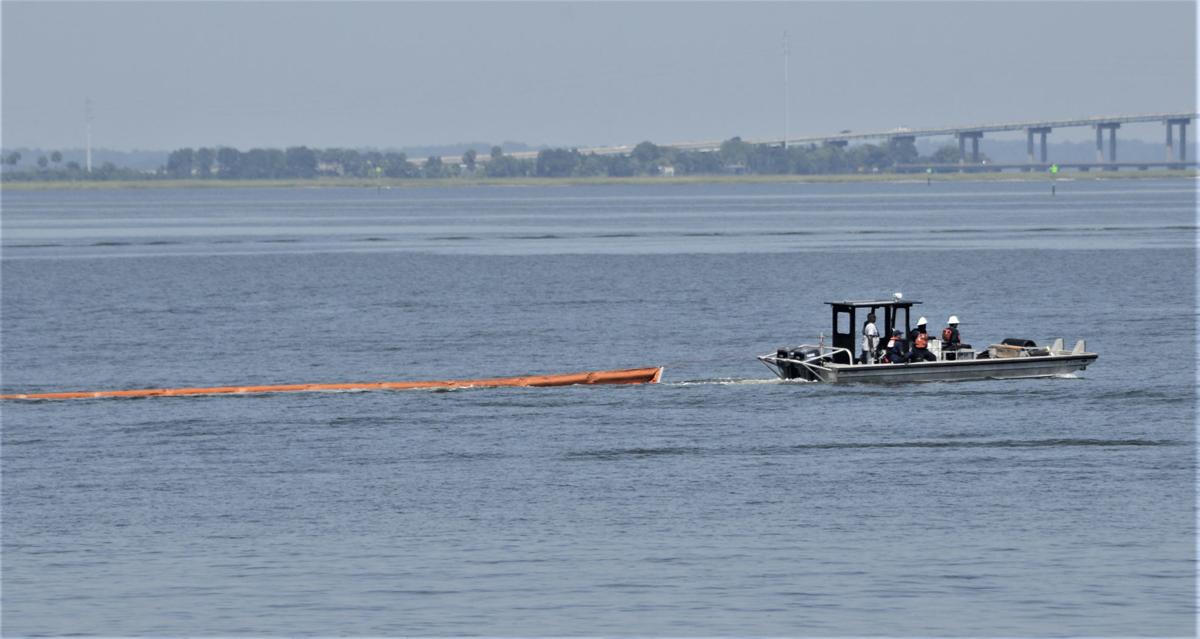 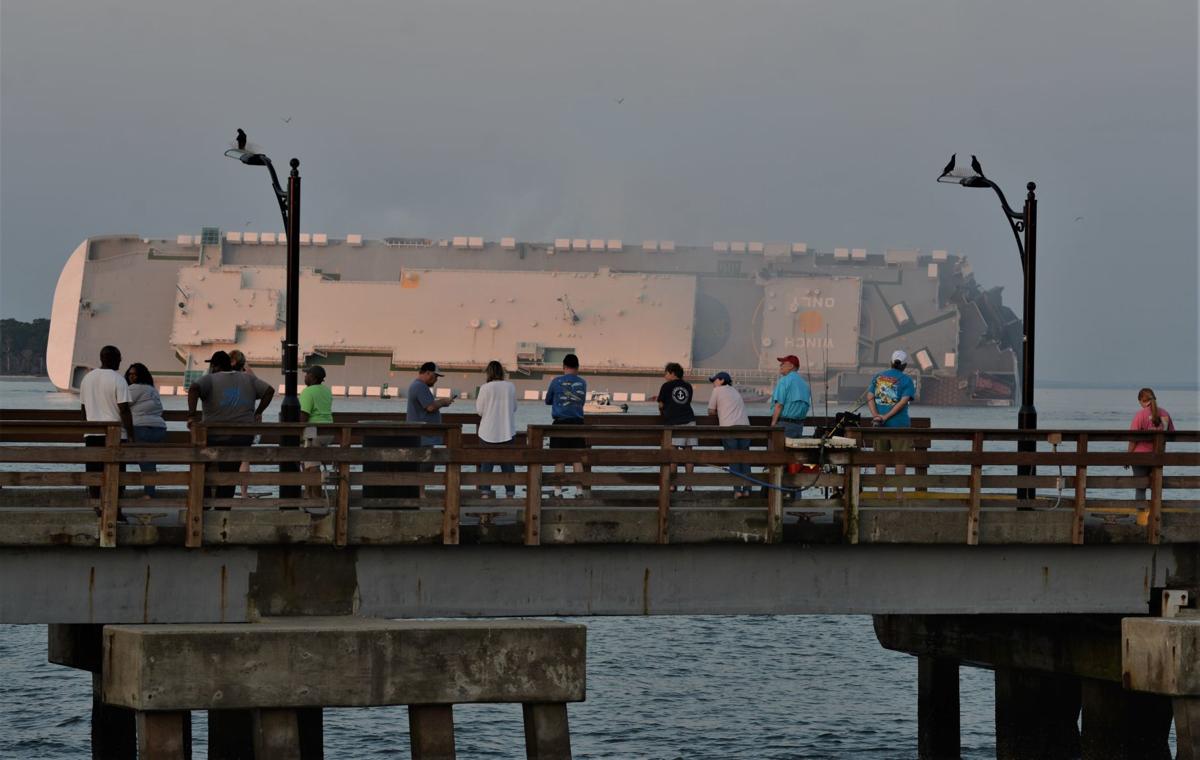 The hull of the capsized Golden Ray was visible from the Jekyll Island fishing pier.

Rachel Mitchell, left, and her daughter Sarah send messages from Driftwood Beach on Jekyll Island with the capsized Golden Ray lying on its side in St. Simons Sound.

The St. Simons Island pier, normally a place to watch sunrises and sunsets, became a vantage point for disaster Sunday morning as hundreds came at or before dawn to see a huge auto transport ship lying on its side.

Nancy Nazzaro was four miles into her morning walk with her dog when she spotted it from Butler Avenue on the island’s south end.

“I saw something that looked like a ship,’’ Nazzaro said, and she quickly learned she could indeed believe her eyes no matter how unlikely the sight was.

“I heard all the helicopters, and it sounded like a search and rescue,’’ she said, and indeed it was.

Glynn County Police Chief John Powell was on the pier radio in hand.

“We got a report at 1:30 a.m. that said witnesses were watching it roll over,’’ Powell said.

“It belongs to the Coast Guard,’’ he said of the response. Glynn County officers were there only if crowd control were needed, he said.

And it was. At 7:40 a.m., a Georgia State Patrol trooper and the police ushered everyone off the pier. As at least 200 walked off, some taking pictures as they left, one officer told a spectator it was likely to protect people from fumes coming from the stricken ship. A faint haze rising from the vessel could be seen in the early light.

A lot of people set aside their normal morning schedules to come witness what is almost certainly a once-in-a-lifetime event.

The Rev. Alex Brown, his wife Sarah and their children Ada, 10, and Campbell, 8, were leaning on a rail watching before the pier was cleared.

Sarah Brown said she learned of it on Facebook and awoke her family, but it wasn’t easy.

Campbell said he didn’t respond when his mother came to his bed.

“Then she said a ship flipped over at the pier. I jumped out of bed,’’ he said.

It was the second bad news of the week, coming hard on the heels of Hurricane Dorian’s pounding waves.

Rev. Brown said he would use Dorian in the sermon he would deliver later at Golden Isles Presbyterian Church.

“The sermon’s on Hurricane Dorian and how hurricanes remind us of our creatureness and drive us to Christ,’’ he said. “We consider ourselves kings and masters of the universe, and then the hurricane comes. It reminds us God is God, and we are not.”

There were more cell phones in the air than gulls as people memorialized the scene before them, posted it on social media or sent it friends.

Tina and Rita Roose took several selfies. They live four days each week on St. Simons and three back in Vidalia.

For longshoreman Belinda West, it meant a disruption of her Sunday work schedule.

“We were waiting for a ship to come in that we were supposed to get at 6 this morning,’’ she said.

That was all delayed when the Coast Guard closed the channel.

Jennifer Meyers Ford and her son Kaden were standing just off the pier watching the boats go toward the vessel with its deck facing the island’s south end. Kaden had a theory on what happened, Meyers said.

“He said a big wave,’’ his mother said. “He loves cars and boats, so we came out here. I grew up here, but the boats never get old. I still come out and watch them.”

Kylie Kaszas was watching with a sense of dread.

“I go on a cruise next week. We were going to Bermuda, and I was worried about the Bermuda Triangle,” she said smiling.

She thought all her worries were unfounded, that nothing bad could possibly happen, at least until she came to the pier and saw the top deck of the keeled over ship nearly perpendicular to the water in the sound.

“I was thinking about wearing my life jacket the whole time,’’ she said of her future time aboard a Carnival ship.

Robert Gentile and his wife Allison Barnes were supposed to join some friends for pickle ball Sunday morning, but that fell to the wayside.

She was of the opinion they would never see anything like it again, and indeed there haven’t been sinkings off St. Simons Island since World War II when a German U-boat torpedoed a couple of tankers in a nighttime raid.

There was a lot of happy chattering as people watched. But, for those who knew of it, the ongoing search for four crew members unaccounted for at the time was sobering.

“We heard there were four people missing. That was the heartache,’’ Gentile said.

Residents of Jekyll Island and St. Simons switched islands through the day to see how the vessel looked from the other side. Those on St. Simons had a view of the upper deck with its half court for basketball while those on Jekyll saw the red hull.

For people on Jekyll’s Driftwood Beach, the capsized ship was an interesting sidelight as they enjoyed a day in the sun and water.

Batson, his wife and two young children had driven from Warner Robins, where Batson serves in the Air Force, to spend a day at the beach. His kids played in a tidal pool around the whitened skeleton of a huge oak that had fallen onto the sand.

“They said, ‘Hey, that’s interesting,’’’ he said of his children’s reaction to the boat, “but not that interesting.’’

They turned their back on the big ship and started playing, Batson said.

Rachel Mitchell and her daughter Sarah came to Jekyll from their home near Exit 29 off Interstate 95 to spend the afternoon at the beach.

On the pier, people fished and along the beach others played in the ocean at low tide encouraged by the 91-degree heat.

U.S. Rep. Buddy Carter’s home in Brunswick, so to speak, is now in Suite 410 at 777 Gloucester St. He held an open house Wednesday morning to celebrate moving in to the new digs.

Showdown in the Sound: Mega-crane vs. hulking shipwreck

A hearing on an injunction that could halt salvage work on the M/V Golden Ray was pushed back because an attorney for Donjon-SMIT, plaintiff in the case, was supposed to be in Europe for work meetings when the federal district court originally set the date for arguments in the lawsuit.

A local effort to help improve interactions between police and people with mental illnesses went to Atlanta on Wednesday under a resolution in the General Assembly to encourage adoption of mental health alert wristbands.