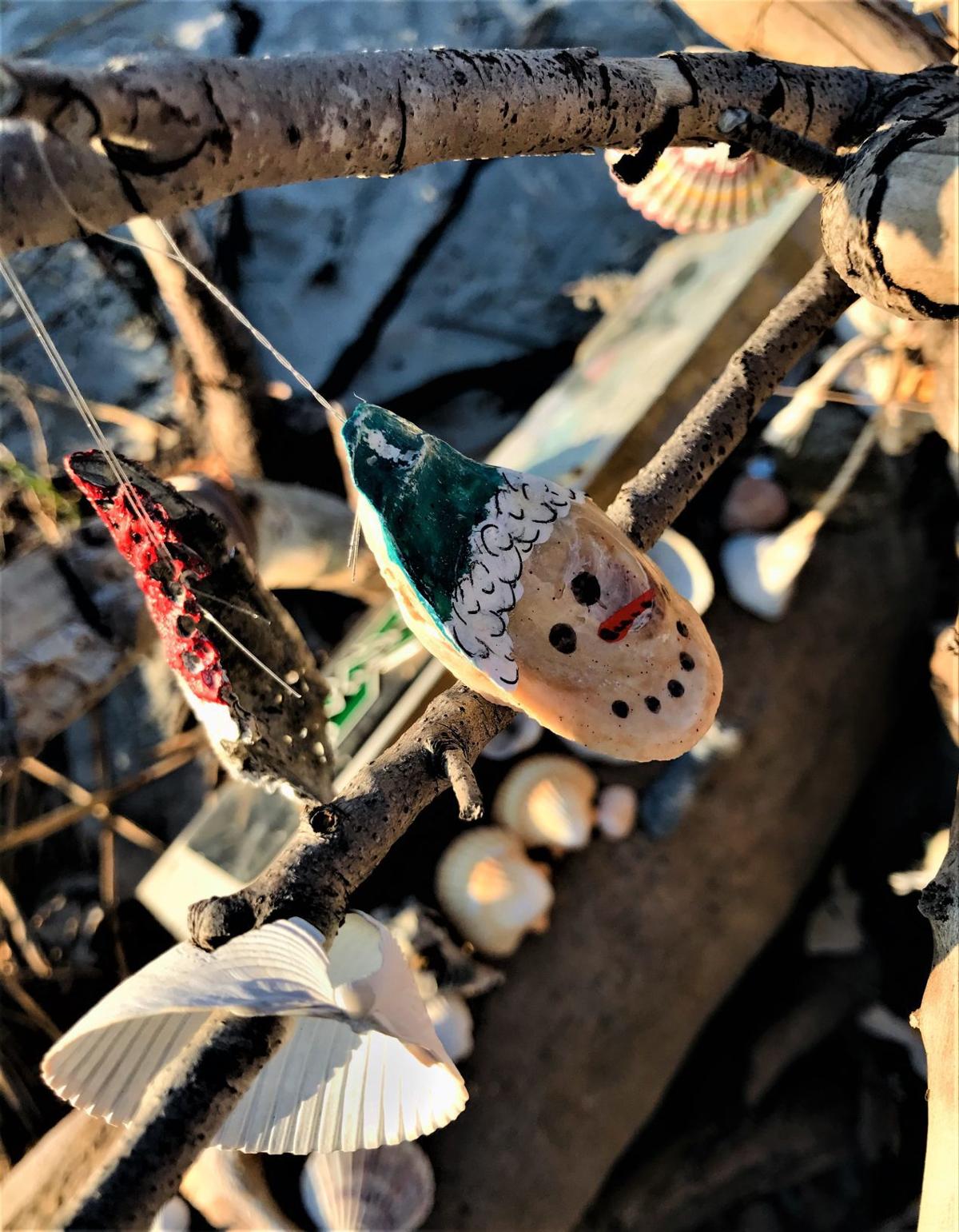 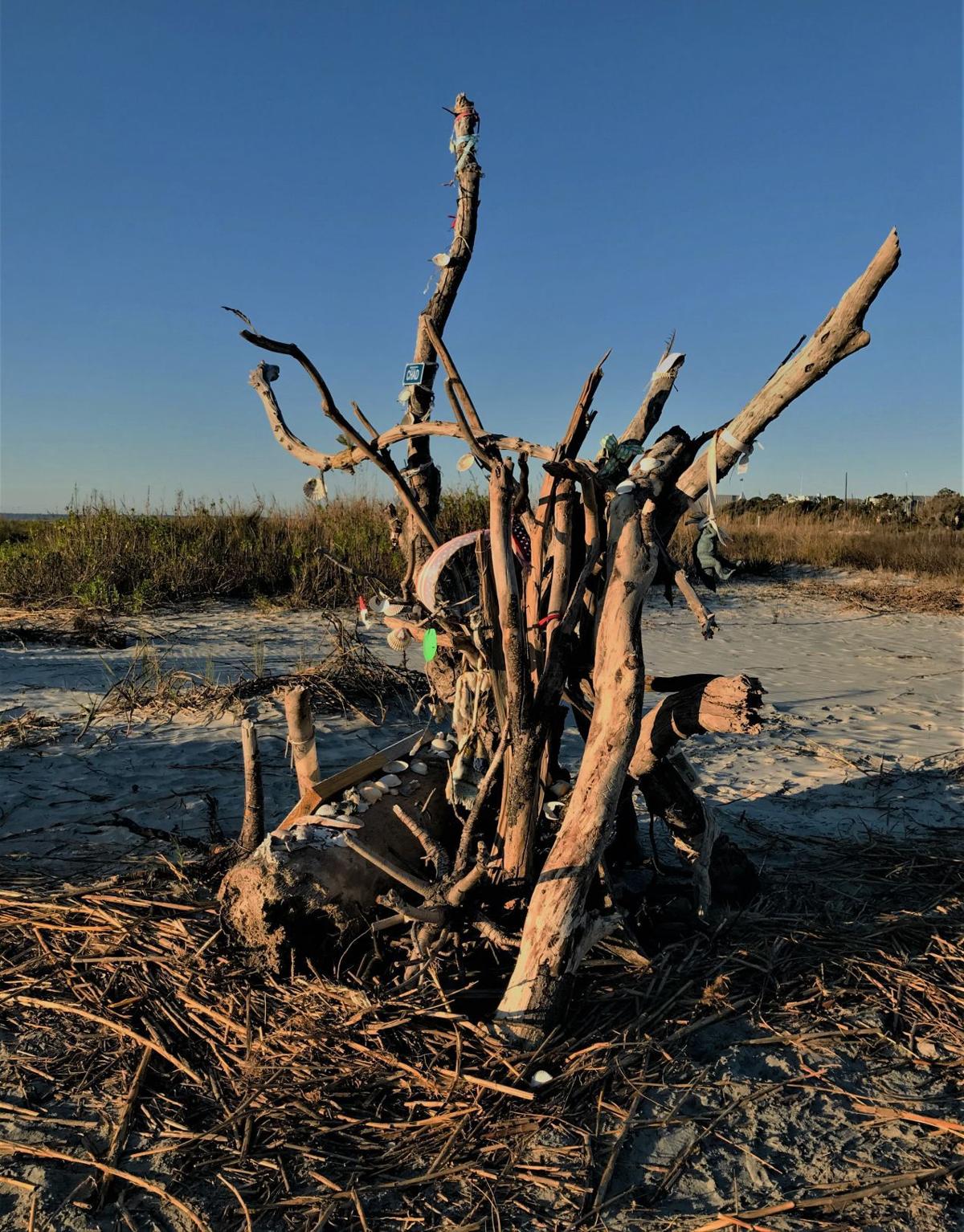 By now everyone knows about the Christmas tree standing tall in the middle of the East Beach roundabout. Fully decorated, it’s nicely anchored now but for much of Monday it lay on its side. Some figured the wind blew it over, but I think it was lying on its side in honor of the Golden Ray.

There’s another tree out on the beach, that doesn’t get as much respect. In fact, Charlie Brown would have turned his back on this tree.

Tree is a generous appraisal of the driftwood sitting in the edge of the dunes on East Beach that was once a living wax myrtle. Maybe it was something else, but it was once a big shrub of some kind.

It was once farther up the beach, but Hermine, Irma, Matthew or an anonymous nor’easter seems to have relocated the tree farther south and closer to the old Coast Guard station.

It sits with its leafless, naked limbs on the edge of the dry beach surrounded by marsh wrack. Whatever it was, it looks like it was hit by a tannen bomb. A few passersby seem to have taken pity and stacked up some driftwood to replace some of the brittle limbs it lost.

It has seen some better days. It washed up roots down on the beach years ago and someone with ornaments to spare decorated it. Other beach walkers joined and, before long, the dead tree glittered with all those donated geegaws dancing and twinkling in the wind.

It’s different now, but people have still tried to put some spirit on the tree, be it Christmas, the 4th of July or a memorial to a departed loved one.

Shells decorate a short piece of palm driftwood that lie at the foot of the little tree and pieces of red-white-and-blue ribbon with stars and trips are twined around some branches.

A little replica of a license plate mounted high tells us “Chad” has been there. People have hung shells and a pair of crusted sunglasses and a bare sand dollar lies at the foot of it. On one limb another sand dollar painted John Deere green catches the cold wind of an early December morning.

There’s a plastic T-Rex, a frayed piece of cord, something that may have once been a nice scarf and a tiny cross.

A section of pipe affixed at the top with a zip tie and a screw make you wonder if someone tried to mount a star there. A couple of ornaments are hand-painted shells, one a Santa’s head, the other that of a snowman.

But it’s not all Christmas cheer.

A little piece of paper has a faded picture of an older woman at the top and beneath it a poem:

My eyes do see,

My ears do hear,

I am still me,

So let’s be clear.

My memory may fade,

my walk may slow.

I am me inside.

The verse is about dementia, and it reminds us, that to some, all their Christmases are Christmases past.

I tried to find something about Janie Wellman but couldn’t. St. Simons may have been a favorite getaway for her family. You figure from this that she had 55 Christmases and that the one of 2016 was her last. You hope it was a happy one for her and the children in that picture.

I just heard a song about missing people. It says, “I miss you most of all at Christmas.”

That’s true. We remember those we lost most of all at Christmas remembering the blessings a grandfather used to say over Christmas dinner, a stocking with your name that your mother had carefully hand-stitched or maybe someone’s favorite chair now sitting empty.

There is no bigger loss than that of a family member, be it by death or separation.

That little tree on the beach tells us something; that Christmas is not just glittering ornaments and gifts, it’s about the people who adorn and enrich our lives.

There are people who aren’t as fortunate as most of us, people whose lives are bleak and lonely. We can help by visiting them, bringing a little cheer into their lives like hanging a shiny ornament on a little tree sitting alone.