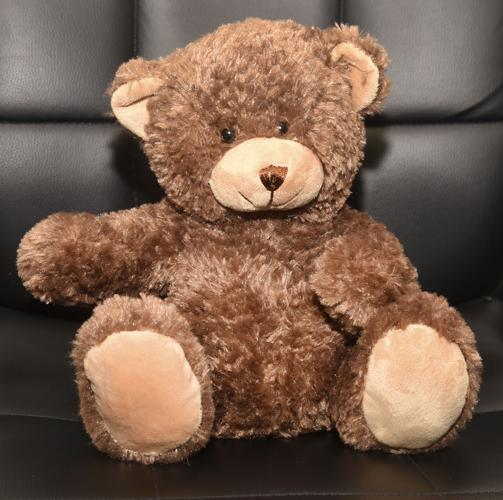 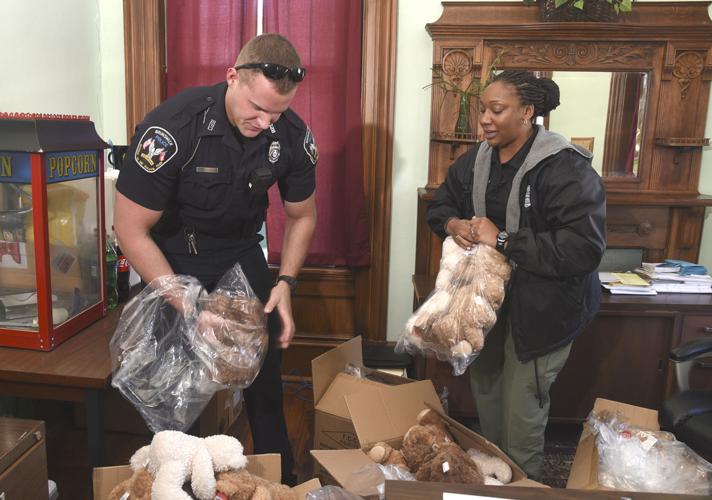 To watch a no-nonsense veteran police officer reduced to a delighted giggling girl, just put a soft and furry plush animal in the arms of Brunswick Capt. Angela Smith.

It happened Tuesday morning, when she encountered a bagful of stuffed critters while stepping into the patrol shift briefing room at the Brunswick Police Department.

“I love it, love it!” Smith cooed, squeezing a floppy deer/bear hybrid of adorability to her cheek. “They just feel so good.”

Such cuddly toy animals have the same effect on real children, which explains what in the heck such childish things were doing in the briefing room to begin with, Smith said. Plush toys are a valuable tool when police officers need to console a distraught child at the scene of an emergency, such as a domestic assault or a fire, Smith said.

“Experience has proven that it can be a soothing influence on children in distress,” Smith said. “When a child is caught up in a tragic situation, a teddy bear can distract and calm them.”

And thanks to the generosity of one of Brunswick’s newest residents, as well as the insurance company she represents, the Brunswick Police Department will not be running out of plush toys to comfort upset kids anytime soon. Doris Carter presented 250 brand new teddy bears to the police department Saturday. Also, each teddy bear comes with its own colorful gift bag. The gift came from a $1,500 grant from Foresters Financial insurance company. Carter is a long-time customer and a volunteer counselor for the company’s many community outreach grant programs in this region.

The retired caterer moved to Brunswick from Jacksonville several months ago, and quickly sought a way to put her volunteer position with Foresters to good use in new her home. Carter wants the gift to bring comfort to children who are caught up in turmoil and grief through no fault of their own. Like Capt. Smith, Carter has a soft spot for stuffed animals.

Smith, officers Marsha Myers-Bue, Ashley Williams and others met Carter during a party Saturday at the police department to receive the teddy bears. Carter insisted on making sure each bear came with its own gift bag, also provided by the grant. Officers from each new shift since then have left the briefing room with a teddy bear in a gift bag, to place in their patrol car’s trunk until needed.

Residents often donate plush toys to the department for this purpose, but this is by far the largest single donation.

“I think they are a different breed of people,” Smith said of Carter and those who made the gift possible. “You just don’t always see people like this who go out and spend their money to provide things for the community like this. We’re very appreciative.”

Officer Williams has seen first-hand that having such toys at the ready is not mere child’s play.

“When a child is involved in a tense situation, we have found that these teddy bears will bring comfort,” she said. “It definitely puts them at ease.”

“If IT makes me feel all warm and fuzzy, I know it will do the same for child, and much more,” she said.

A monument to Confederate soldiers in Hanover Square came down Tuesday, its future unknown as it was loaded onto a truck and trailer in three pieces.

The results of a survey created to gauge public support for a planned Special Purpose Local Option Sales Tax referendum were revealed Monday in a meeting of elected city and county officials.

An estimated 5.5 miles of the worst roads in Brunswick could be getting a face-lift.

Nesting shorebirds on local beaches don’t need much — just a little space to rest, eat and bring their chicks safely into the world.

Stages of the total lunar eclipse

The Golden Isles was among the places that got to enjoy a total lunar eclipse on Sunday night. A total eclipse occurs when Earth passes directly between the moon and the sun, casting a shadow on the earth’s celestial partner. It also makes the moon appear red or orange, much different from i…

Two one-cent sales taxes were the major topics discussed by Brunswick City Commissioners during a daylong, special-called meeting Saturday to discuss a variety of city issues.